Great British Bake Off is back with crazy creations

They are creations that would not look out of place in the final of The Great British Bake Off.

Yet these extraordinarily convincing ‘illusion cakes’, made to look like a BLT sandwich, a watermelon, a stack of pancakes and a bowl of noodles, were crafted during last night’s first episode of the new series.

The fiendish task was billed as the ‘hardest first showstopper’ ever to be set on the hit baking show – which has moved to Channel 4 – and was always going to sort the wheat from the chaff.

And the triumphs of deception and baking competence were certainly matched by disasters, in the form of a black clutch bag and a loaf of bread with a snapped knife.

Marketing executive Steven was crowned the first star baker for his bacon, lettuce and tomato sandwich 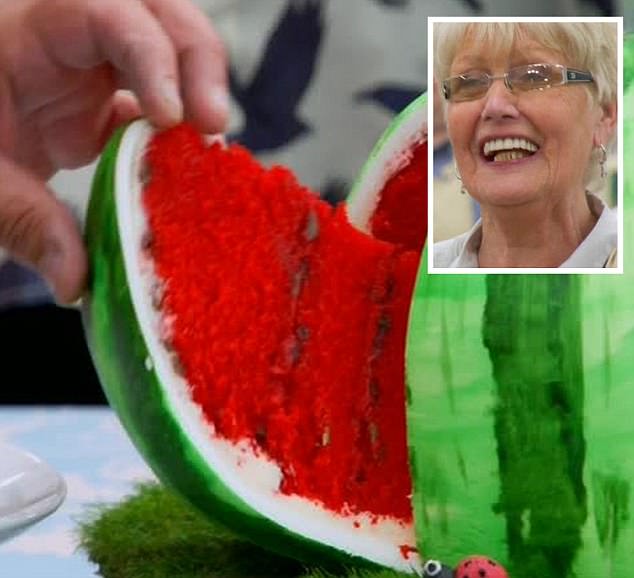 Merseyside grandmother Flo, 71, made a watermelon cake that would not look out of place in a greengrocer’s 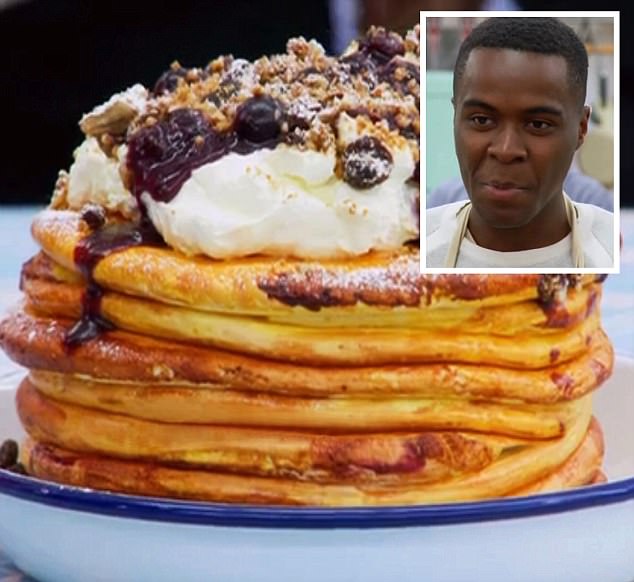 And 19-year-old student Liam, from North London, wowed with his fake pancakes

Indeed, while marketing executive Steven was crowned the first star baker for his bacon, lettuce and tomato sandwich, the challenge proved the undoing of IT manager Peter.

The 52-year-old had earlier finished bottom of the technical challenge when piping the wrong type of chocolate on his mini-rolls, and was then doomed when the sugar knife for his bread broke.

Nevertheless, the show’s return was met with a positive reaction from fans, who commented that it had barely changed in moving from the BBC.

One aspect that was strikingly similar to the corporation’s version was the prevalence of innuendos, including mentions of ‘bare bottoms’, ‘a nice pair’ and even a ‘moist clutch’.

At one point, ex-Army officer Sophie unintentionally produced a phallic moment, when moulding the shaft of her fondant icing champagne bottle.

Following Paul Hollywood’s bold claim that this year’s contestants were the best bakers ever to grace the tent, Steven threw down the gauntlet with his ‘Baker’s Lunch’ cake. 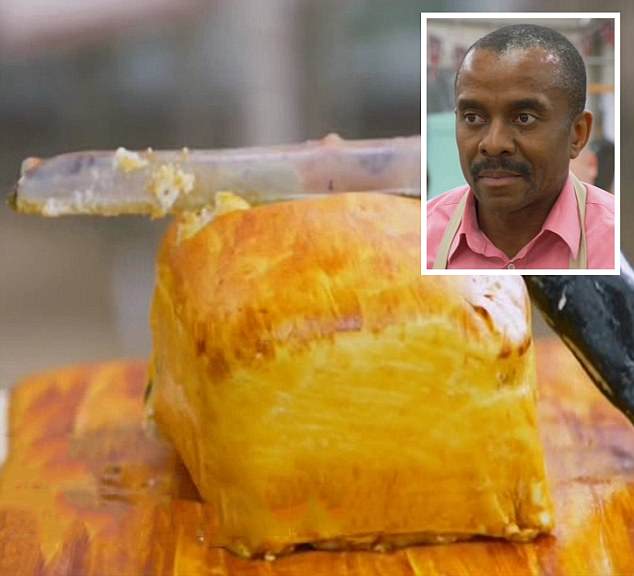 Hollywood said: ‘The standard of the show is so high, but unfortunately it was Peter’s turn to go.’ 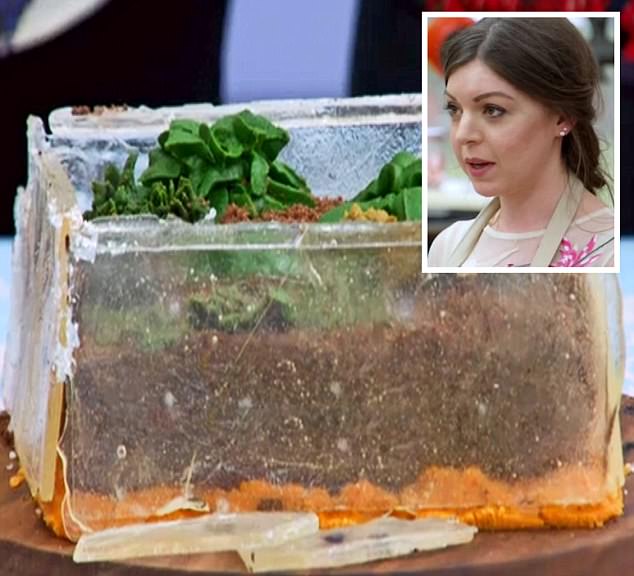 Health and safety inspector Kate, 19, from Liverpool, failed her test with the Greenhouse cake 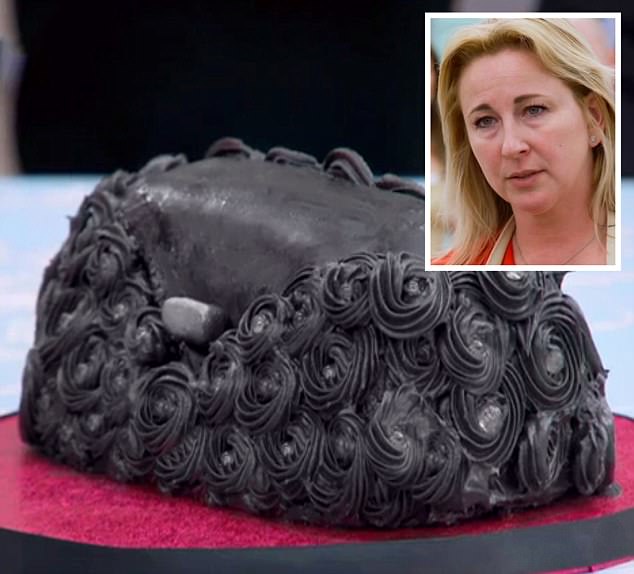 Indeed, both Hollywood and his new co-judge Prue Leith, who has replaced Mary Berry, looked taken aback at the creation, describing it as ‘stunning’ and ‘perfect’.

Such was the level of trickery that Miss Leith – who was not afraid to show her formidable side when faced with below-par cakes – commented: ‘You wouldn’t think it wasn’t bread.’

Meanwhile, Merseyside grandmother Flo, 71, made a watermelon cake that would not look out of place in a greengrocer’s, and 19-year-old student Liam wowed with his fake pancakes.

Molecular biologist Yan, who works for the NHS, demonstrated her ability with her Asian-inspired dish, featuring fondant icing noodles and chicken ramen made from Rice Krispies. 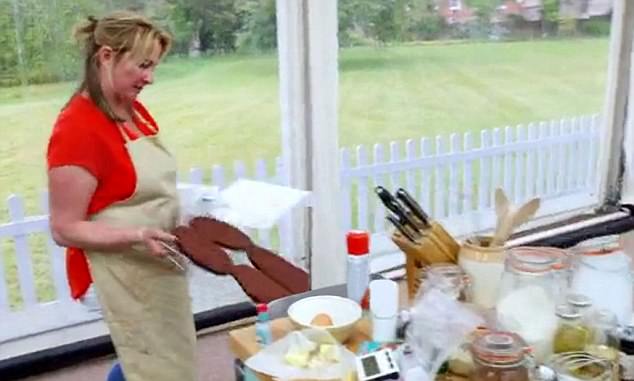 It was not the first time Stacey, a stay-at-home mother, had faltered – earlier in the episode she resorted to throwing her cake in the bin 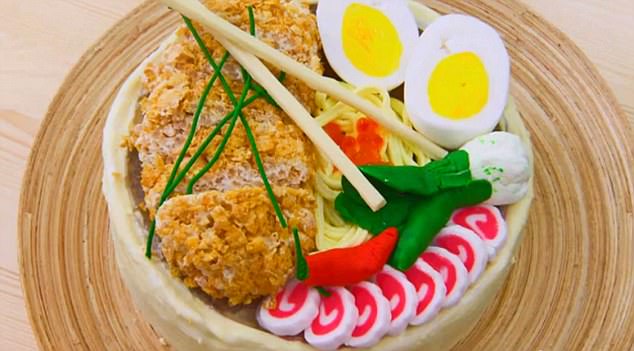 However, at the opposite end of the leader-board, ex-school teacher Stacey left the judges stumped with her black clutch bag cake.

Miss Leith said: ‘I am not certain I would know it was a handbag’, while Hollywood said: ‘It looks like a decorated cake rather than a handbag.’

It was not the first time Stacey, a stay-at-home mother, had faltered – earlier in the episode she resorted to throwing her cake in the bin.

In an earlier round, Yan also threw her first attempt at an apple crumble cake in the bin, before starting again.

Speaking about becoming the first baker to leave the tent, Peter said: ‘I’m disappointed to be the first off, but it has been a lovely experience throughout. It was quite surreal from day one, and I wouldn’t change any of it for the world. All of the bakers are my friends now, and they are amazing in their own way. They are a wonderful bunch and I will be watching them throughout.’

Hollywood said: ‘The standard of the show is so high, but unfortunately it was Peter’s turn to go.’

Last week Channel 4’s outgoing chief creative officer, Jay Hunt, said the show would need to be watched by 3million people for the broadcaster to break even. The broadcaster spent a reported £75million on a three-year contract for the show, which aired for seven series on the BBC.