The 78-year-old baking judge confessed she wasn’t open to marrying again so late in life until she met the fashion designer and the pair were happy to stay unmarried for the five years they dated.

Prue’s revelations came as she graces the cover of November’s Good Housekeeping, also chatting about her love of food and eccentric fashion choices.

Prue tied the knot with John in 2016 after five years together, and the star said that she’s never been happier since becoming a wife again, despite the couple previously vowing they were happy remaining just partners.

The South African cook was previously married to author Rayne Kruger from 1974 to 2002, when he died at the age of 80.

She said: ‘I am [very happy]. Not least because I remarried two years ago. I’ve been with John [Playfair] now for seven years, it took us five years to decide to do it.

‘It just seemed like, ‘We’re so old, what’s the point really?’ Anyhow, we did it. It’s been absolutely wonderful. That made me really happy because I’d be single for 14 years – I thought that was it. At my age, you don’t expect to fall in love again, so I’ve been really lucky. 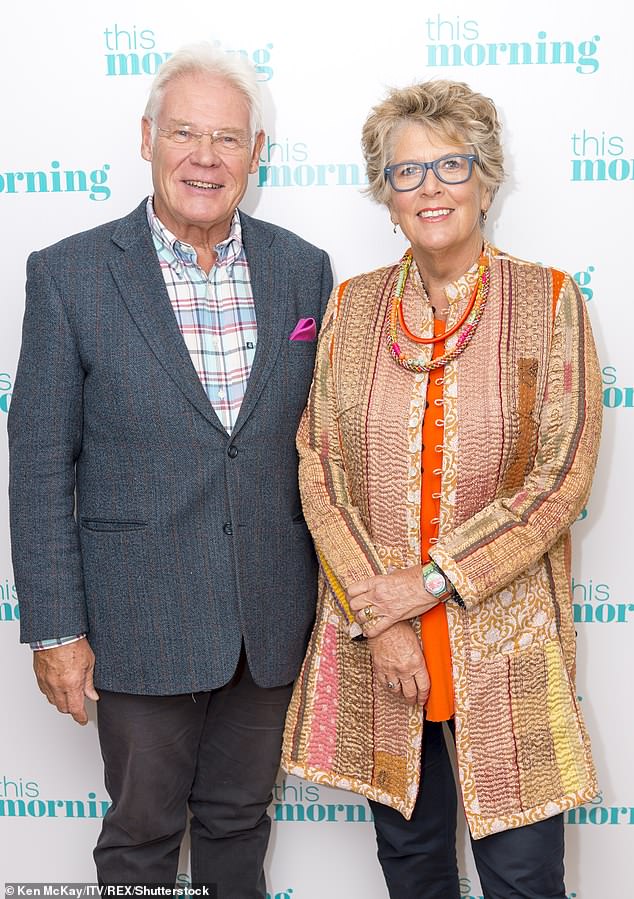 Over the moon: Prue tied the knot with John in 2016 after five years together,despite the couple previously vowing they were happy remaining just partners 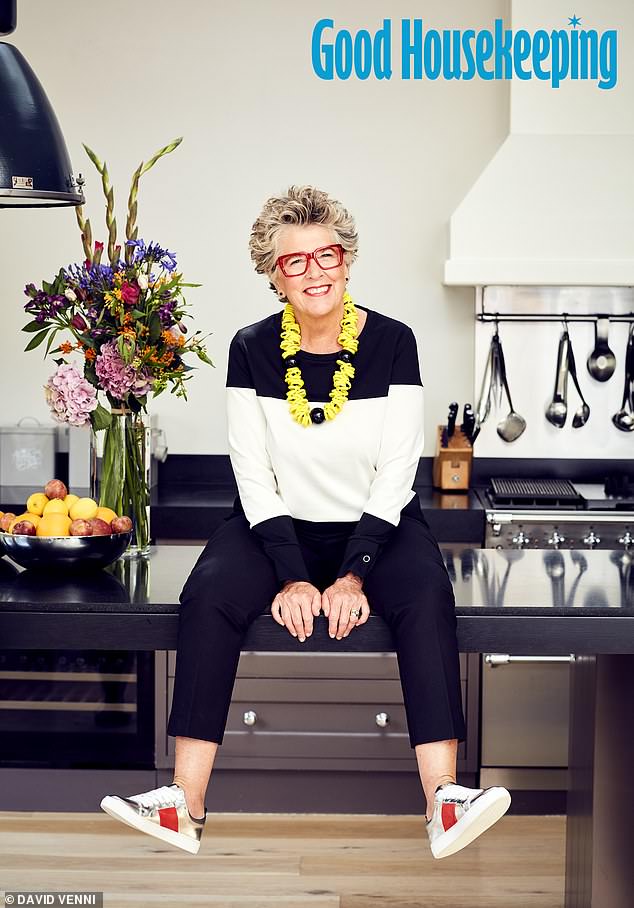 Delighted: The Bake Off judge, 78, told Good Housekeeping she’s been ‘very lucky’ to have found love again so late in life

‘I’ve never been very good at looking forward or for that matter, looking back. I really do live in the present and so I’ve always been very conscious of how happy I am.

‘It sounds so smug, but the fact is, I had a really happy childhood. I had nothing but encouragement from my parents and tolerance when I was being an absolute idiot.

‘And I had a terrific career in food and married a wonderful man. We had two children, who are still adored, they adore me and we’re very close.

‘Rayne was 20 years older than me. He died when he was 80, so he had a really good life. But I didn’t think my life was over then, I thought ”Right, my life has changed, I’m now going to be a good grandmother.” 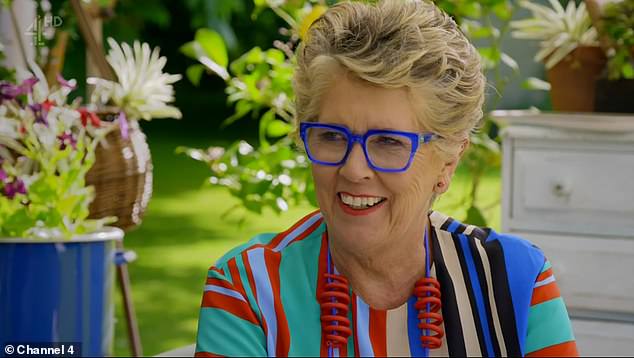 Beloved: Since taking over from Mary Berry as a Bake Off judge, Prue has won over fans with her firm but fair judging 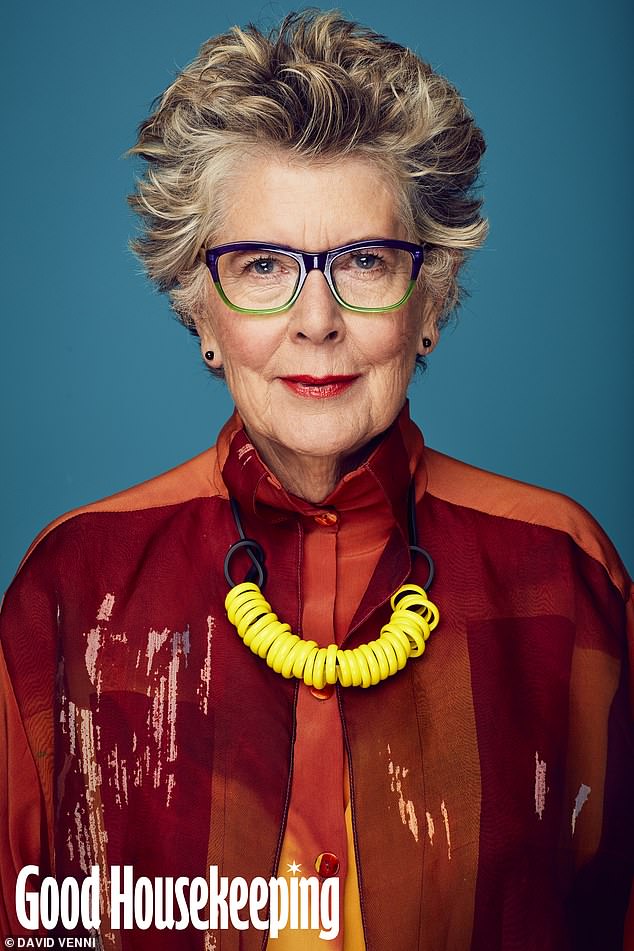 Proud: Prue went onto explain that she despite decades of experience in cooking and baking,  she still gets a kick out of being recognised in the street since joining Bake Off last year

Prue has become a fan favourite since she joined Bake Off upon its move to Channel 4 last year, and despite much doubt the show would flop upon its move from the BBC, the format has been bigger and better than ever.

Despite decades of experience in cooking and baking, Pue added she still gets a kick out of being recognised in the street.

‘Before Bake Off, frankly, if you’d asked most people on the bus if they’d ever heard of me, it would probably only have been those aged over 55. But if they were 15, they wouldn’t have, and that’s the difference with Bake Off – it’s loved across the generations.’ 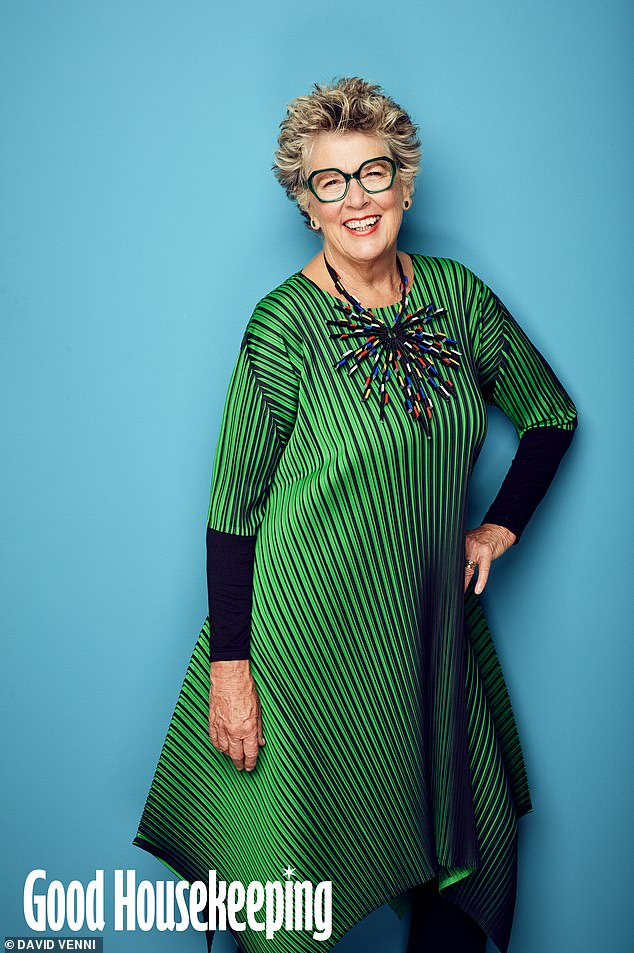 Lovely: The South African cook also said that her distinctive fashion sense comes from a love of clashing bright colours with contrasting accessories

As a connoisseur of baking and sweet treats, Prue cannot shy away from a cheeky indulgence, but went onto add that since getting older she’s become more conscious of the food she eats.

She said: ‘I do [eat healthily] but I won’t be a martyr about it. I would never eat a salad without dressing – there’s no point! I don’t generally eat a lot of carbs.

‘Fortunately, as I’ve gotten older I can’t drink as much as I used to. When I was young I could knock off a bottle of wine and then get up in the morning and feel fine. Now if I have more than two glasses I know about it in the morning.

‘I’m teased on Bake Off because I say, ”That’s not worth the calories,” but that’s because I always think in calories. I’ve been in food so long, I’m very aware.’ 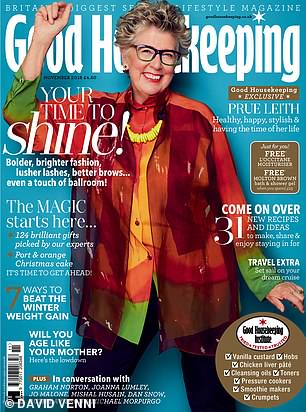 The full interview appears in the November issue of Good Housekeeping, on sale 3rd October

Prue has also sent fans wild with an array of colourful outfits during her appearances in the Bake Off tents, and she admitted that she’s less interested in fashion but more in wearing bright looks.

She said: ‘Everyone says I am into fashion but I’m not. What I like is colour. If I’m wearing a green dress, I want to have a necklace and earrings that I think look good with it, so I’ve always been rather excessive. My brother used to say I dress like a Christmas tree!’

The full interview appears in the November issue of Good Housekeeping, on sale 3rd October.