New York Gov. Andrew Cuomo has ordered flags around the state to fly at half-mast in honor of those who have died from COVID-19 after recording the state’s deadliest 24 hours which claimed 779 lives.

Cuomo, speaking at his daily briefing in Albany on Wednesday, said there was a ‘mix’ of emotions that came with the fact New York has flattened the curve of new infections and new hospitalizations while the death toll keeps ticking up.

It will continue to rise, he said, as more people who entered the hospital 10 days ago or two weeks ago and who needed ventilators, fail to recover.

The total death toll across the state now sits at 6,268 – more than double the number of people who died in 9/11.

The total number of infections is 149,316 – an increase of 10,480 from the number Cuomo gave yesterday morning. It marks a larger increase than in previous days, when there were fewer than 9,000 new cases.

Cuomo said, however, that the rate of hospitalizations is down and continues to decrease which shows social distancing is working.

He however said the state was ‘by no means out of the woods’, and that now was the time to be ‘more vigilant’.

‘What we have done and what we are doing is actually working and it’s making a difference. We took dramatic actions in this state. It is working,’ he said. 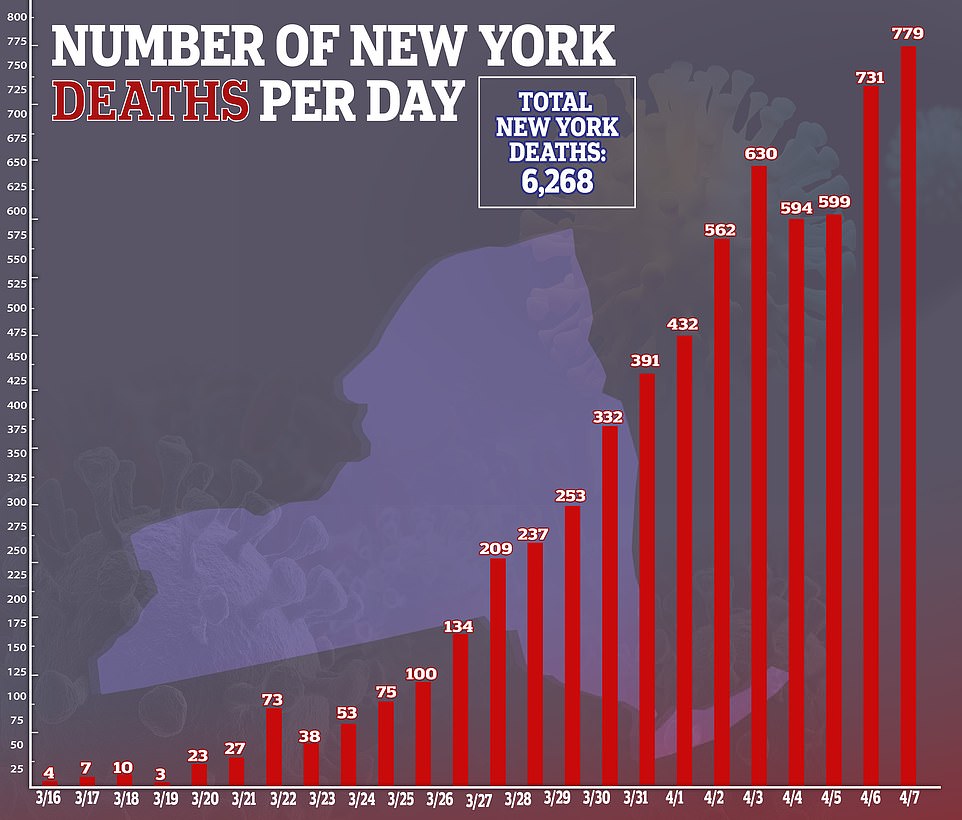 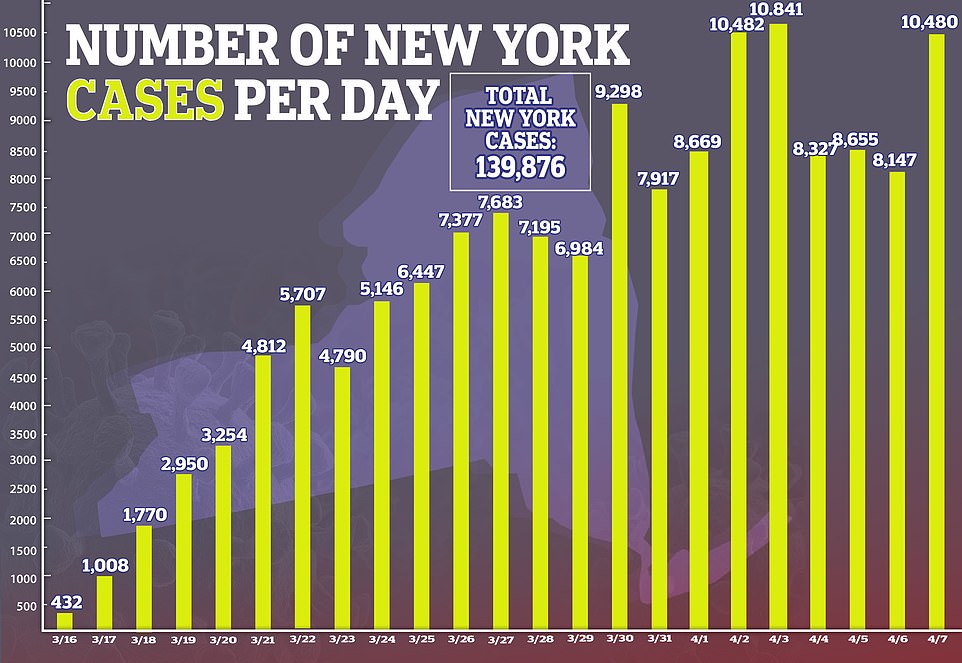 However the governor said it was difficult to ‘square’ the progress with the fact that so many people had died.

‘The bad news isn’t just bad. It’s terrible actually. The death toll, it’s been going steadily up and it reached a new height.

‘The number of deaths will continue to rise as those hospitalized for a longer period of time pass away. The longer you are on a ventilator, the less likely you will come off.

‘I understand the science of it, the facts and the logic. But it is still incredibly difficult to deal with. Every number is a face.

‘That’s been painfully obvious to me every day. But we have lost people, many of them, front line workers, healthcare workers, many of them people doing the essential functions that we all needed for society to go on.

‘They were putting themselves at risk and knew they were. Many of them vulnerable people who this vicious predator of a virus targeted from day one,’ he said.

He went on to say that the tragedy was on a larger scale than 9/11 and one he had trouble comprehending.

‘I went through 9/11 and thought that in my lifetime, I would never have to see anything like that again. I remember the number of funerals, I remember the grief after 9/11.

‘That this should literally eclipse that in terms of the number of dead in this state? It’s almost unimaginable to me. 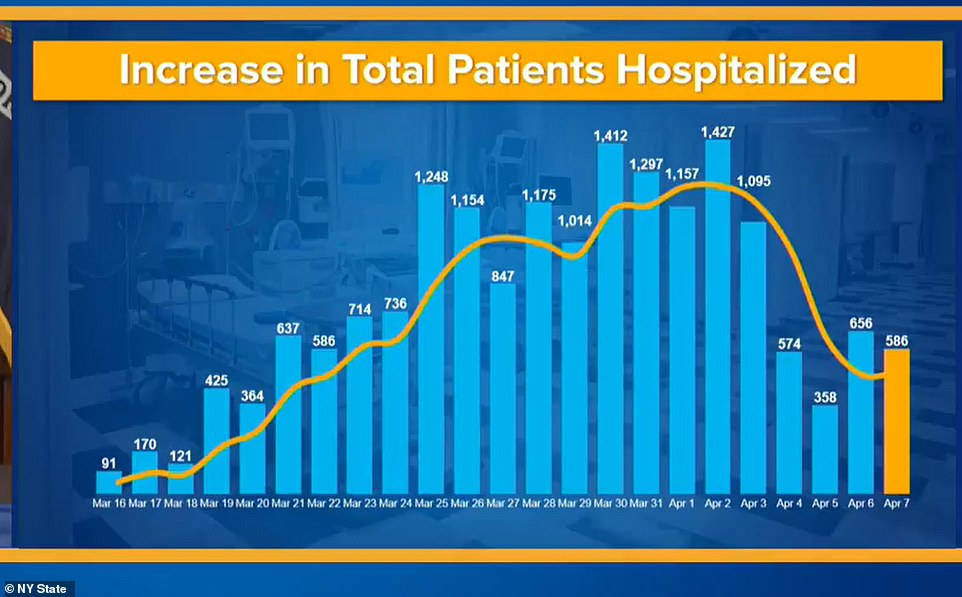 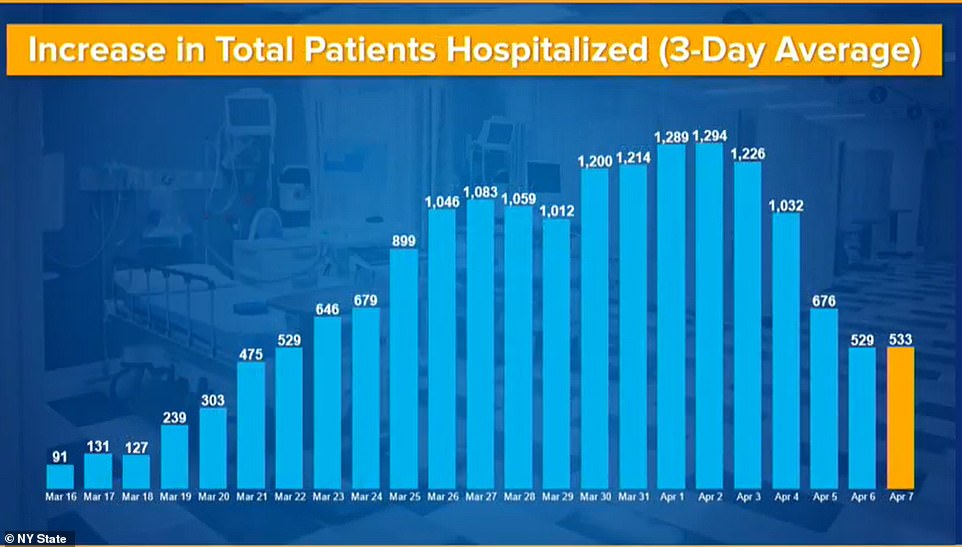 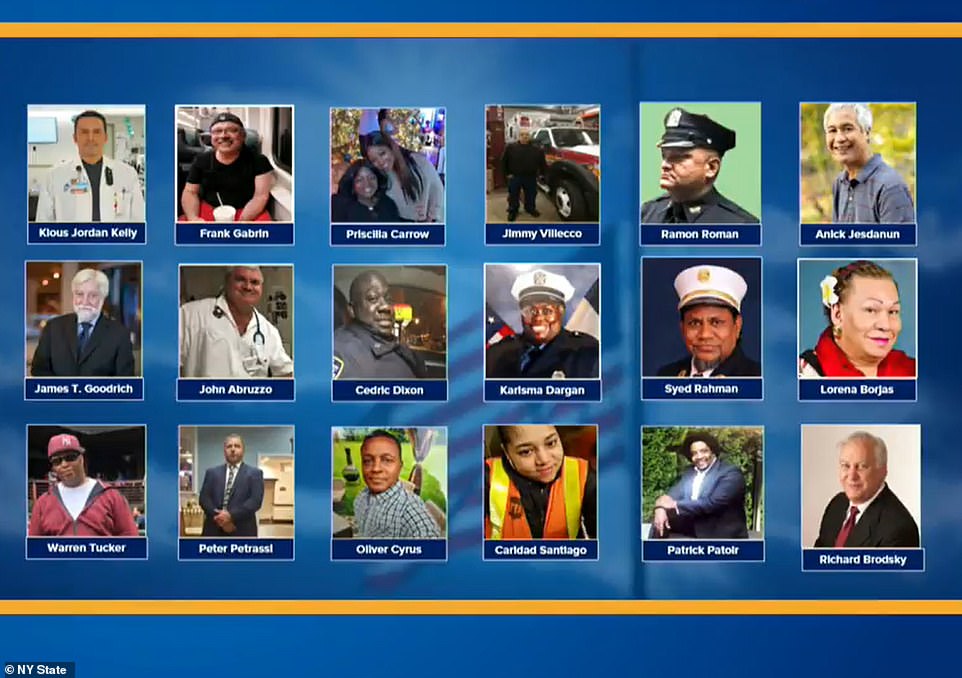 Cuomo also paid tribute to some of the front line workers who have died battling the virus. ‘Every number is a face,’ he said 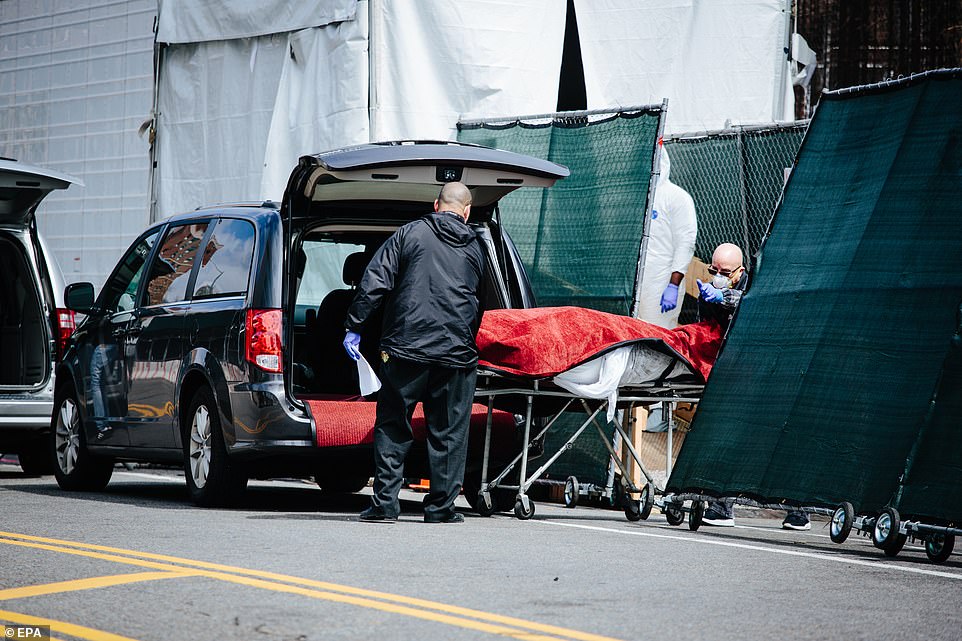 Hospital employees remove a body from the Brooklyn Hospital Center in Brooklyn, NY, on Wednesday April 8 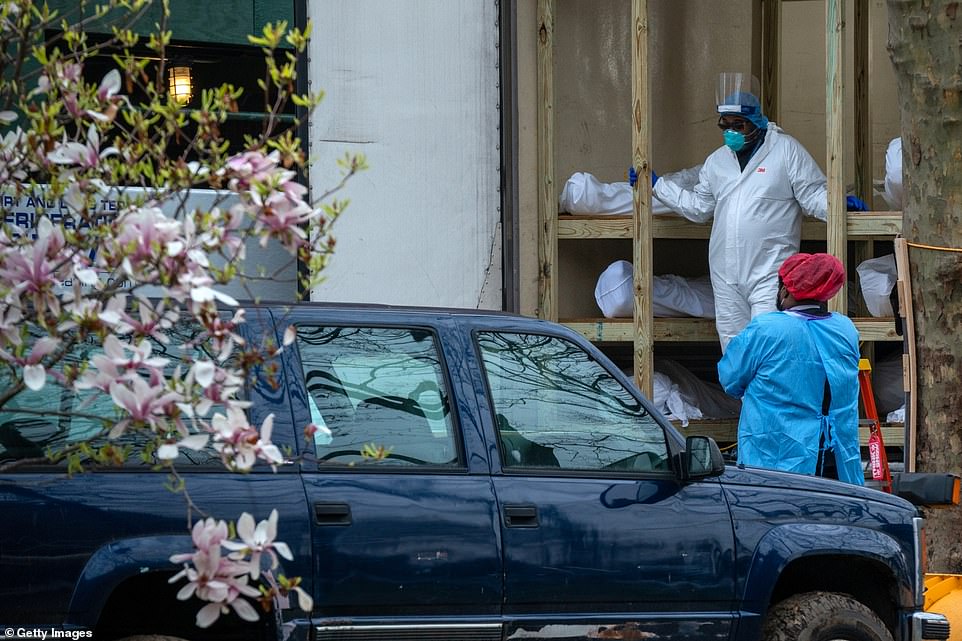 Hospitals and morgues are working round the clock to stay on top of the bodycount. There have been 4,000 in New York City alone

‘How do you square those two things? We’re making progress [but] we lost more people than ever before on a single day,’ he said.

Cuomo added that he was particularly troubled by the fact there were higher rates of infection and deaths among African American and Latino communities.

He has ordered research to be carried out immediately to determine why that is, and said he is also conducting more testing among those communities.

Thank you to all New Yorkers for all they have done. We still have more to do. We are by no means out of the woods

‘Why are more African Americans and Latinos affected? The numbers in New York are not as bad as the disparities we see in other places across the country but there are still disparities.

‘Why? There’s something to it.

‘It always seems the poorest people pay the highest price. Why is that? Whatever the situation is – a natural disaster, Hurricane Katrina…the people standing on those rooftops were not rich, white people. Why?

‘Let’s do the work, the research and let’s learn from this now,’ he said.

Cuomo is urging extreme caution to anyone who interprets the data in a way to suggest New York has beaten the virus or is on a path to returning to work or ‘normal’.

‘This can still turn any way from Sunday. Thank you to all New Yorkers for all they have done. We still have more to do. We are by no means out of the woods and do not misread what you’re seeing in that data and in those charts.

‘That is a pure product of our actions and behavior. If we behave differently, you will see those numbers change.

‘If anything, we have to get more diligent, not less diligent. That’s New York tough. Tough is more than just tough, tough is smart and disciplined and loving. 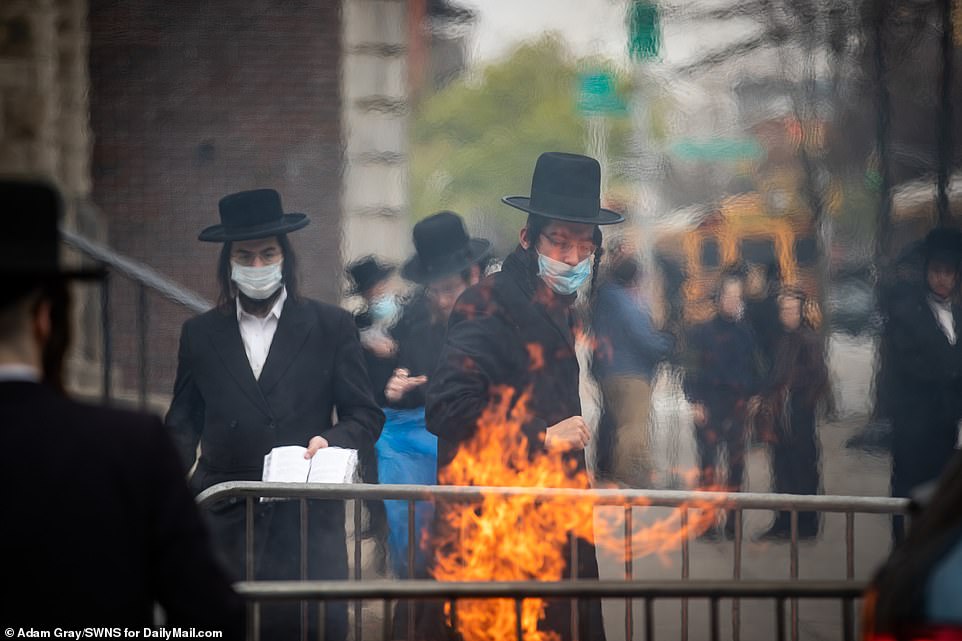 Hasidic Jews in Williamsburg on Wednesday, the morning before Passover, gathering for The Burning of the Chametz. Cuomo has asked them to stay home for their own safety

‘The toughest guys are tough enough to love,’ he said.

‘I am more worried about people thinking cases are coming down it’s now safer – it’s not. I’m more afraid of the curve changing that people read something into it that’s not there. If you reduce compliance on social distancing, you’ll see those numbers go up.

‘Be careful of counting our chickens before they hatch. We are in the midst of this,’ he said.

He resisted giving a warning to people flouting social distancing rules, including members of the Jewish community, who will celebrate Passover over the next two days.

It has sparked concern among leaders, particularly for the Orthodox communities who have not obeyed social distancing laws and continue to gather despite being warned they could face fines.

Cuomo said on Wednesday: ‘Our brothers and sisters in the Jewish community, we wish them all a happy Passover.

‘The Jewish community has had a long and difficult year besides any of this… the number of anti-semitic incidents, the violence… we wish them all well on Passover.

‘Next year in Jerusalem, next year the promised land, next year will be better.

‘This has been a difficult month. We’ll learn a lot, move forward and be better for it,’ he said.

Cuomo went on to say society would not return to ‘normal’ and that we may never live in a world without COVID-19.

‘I don’t think we return to normal, yesterday, where we were. If we’re smart, we achieve a new normal.

‘We have to learn. We have to learn what it means – global pandemic. How small the world has actually gotten. Someone sneezes in Asia today, you catch a cold tomorrow.

‘Look at the way we’re scrambling to make this work. We have to learn from that,’ he said.