Grieving parents say they were failed by NHS 111 helpline

Grieving parents have said they were ‘failed’ by an NHS helpline when paramedics took more than an hour to treat their dying baby.

Steve Golding and Hannah Henderson say they were ‘failed massively’ by the East Kent 111 service, whose operator recently announced it was terminating its contract with the NHS after a damning CQC report in August.

Their three-day-old son, Teddy, died after being diagnosed with colic.

An investigation has been launched into his death.

According to Mr Golding and Miss Henderson, they became concerned for their son’s wellbeing when he fell ill in the early hours of Saturday, August 26 at their home in Dover Road, Folkestone.

After their first worried phone call to NHS 111 at 1am, the pair said they were given an appointment to see the out-of-hours GP at 9.30am.

According to the heartbroken couple, when they attended the appointment, baby Teddy was diagnosed with the common infant condition, colic.

But when the newborn’s hands and feet began to turn purple, his worried parents and a concerned neighbour said they called the NHS 111 service.

Mr Golding said: ‘We spoke to NHS 111 at around 1pm, it was a neighbour that called – she was in the house with us at the time.

‘They advised her to put him on his side on the floor and that a car was on the way. 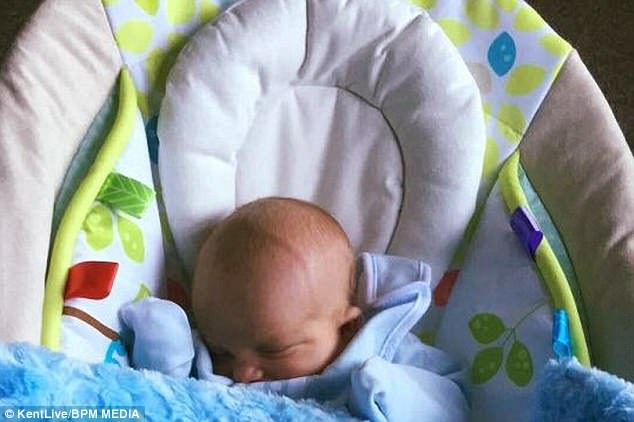 Their three-day-old son, Teddy, died after being diagnosed with colic. He fell ill in the early hours of Saturday, August 26 at their home in Dover Road, Folkestone

‘The car never actually arrived. He went blue and purple in his hands and feet so at 2.38pm I phoned 999.’

According to Mr Golding, a paramedic car then arrived at 3pm, followed shortly afterwards by an ambulance.

He added: ‘They took him into the ambulance to work on him and then blue lighted him all the way to the William Harvey Hospital.’

While medics managed to detect a faint heartbeat, the devastated parents were told there would be little chance of their son regaining a good quality of life and the decision was made to stop treating him.

Miss Henderson said: ‘They [the 111 service] need to be made accountable for their actions.

‘He was a perfectly healthy baby boy and he was discharged from the hospital when he was born within 12 hours. There was nothing wrong with him, it shouldn’t have come to this. 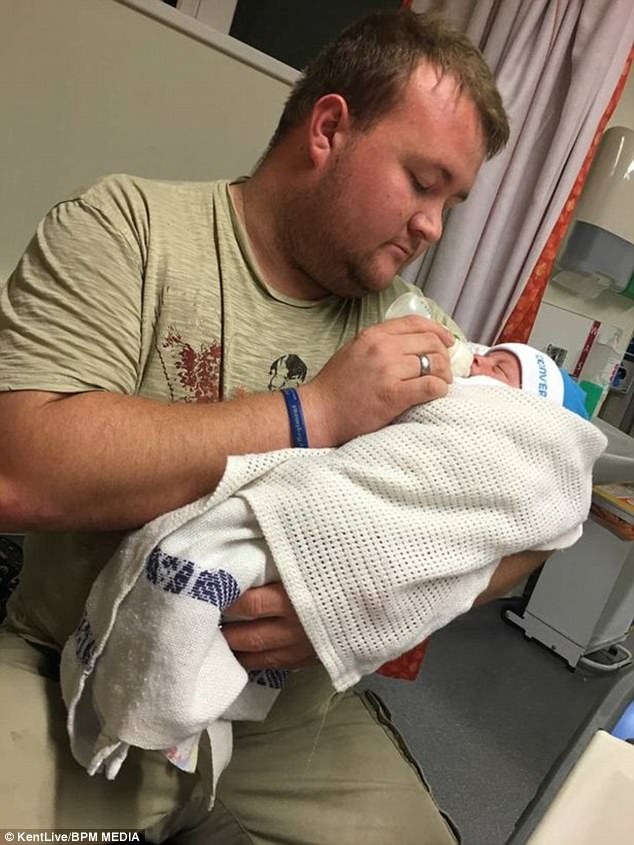 Tests are currently being carried out to try and establish the cause of death. Teddy is pictured with Mr Golding after being born

‘We have two other children, Charlotte, four, and Oakley, two, and we are just trying to stay as strong for them as possible. We have got to be strong for them, they can’t notice it.’

Tests are currently being carried out to try and establish the cause of death.

Yesterday a spokesman for Nestor Primecare Services, the company which runs the 111 service, confirmed an investigation was underway regarding the death of a patient.

He said: ‘We can confirm that on Saturday, August 26, 2017 at 15:20, a death was reported by ambulance staff attending to a patient in the East Kent area.

‘Primecare is currently conducting an investigation into the circumstances of the death, working with NHS England, the Clinical Commissioning Group (CCG) and the Care Quality Commission (CQC).

‘Our sincere condolences are with the patient’s family at this time.’