Grimefighters tackling a giant fatberg have removed 800 tonnes of grease from a sewer under popular bars and restaurants as part of a £2 million operation.

The monstrous wad of fat, grease and oil has built up over several months underneath the streets of Cardiff Bay in Wales.

Utility company Welsh Water has already removed 800 tonnes of sewage through a ‘deep excavation’, but there is still more to do.

This monstrous wad of fat, grease and oil (pictured) has built up over several months underneath the streets of Cardiff Bay in Wales 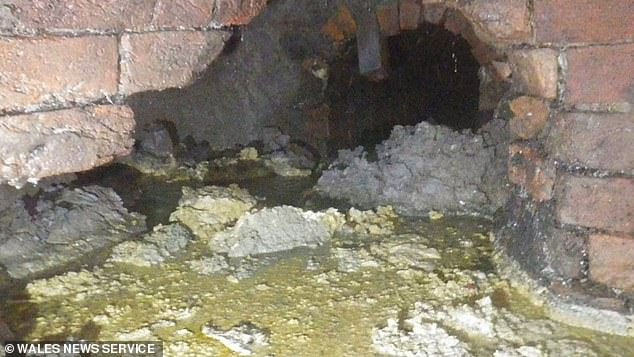 Fatbergs typically consist of flushed fat, oil and grease. But can also include other waste such as wet wipes, food wrappers and illegal drugs

Steve Wilson, Welsh Water’s director of wastewater services, said: ‘We’ve got a huge problem down there with blockages.

‘The size of the fatberg that has developed under Mermaid Quay is something to behold.’

Around 500 tonnes of the waste removed was fat alone, but is likely to also have been made up of other flushed items such as wet wipes, food wrappers and human waste.

The £2 million project is to stop over the Christmas period to avoid stinking out shoppers.

Water companies say fatbergs are becoming a growing problem across the UK as sewer systems are increasingly getting blocked.

They are caused by households and restaurants pouring oil and fat waste down the sink that should not go there – costing £80 million a year across the UK to deal with. 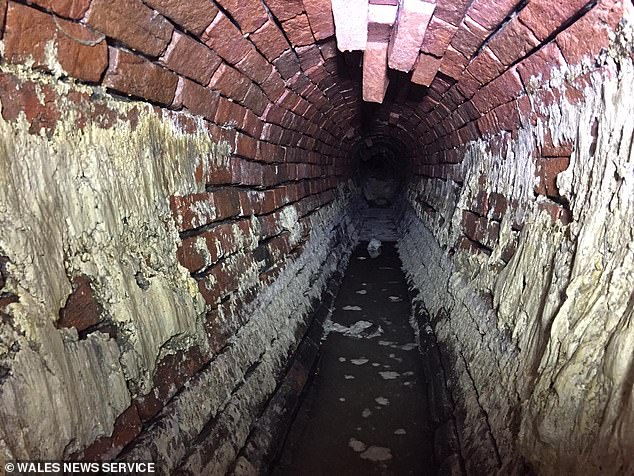 Utility company Welsh Water has already removed 800 tonnes of sewage (pictured) through a ‘deep excavation’, but there is still more to do

It was just over a year and a half ago that Britain’s biggest ever fatberg was discovered in Whitechapel, east London.

The monster fatberg was found to be a concoction of ‘fat, oil, condoms, wet wipes and grease’ and was more than 250 yards long.

Thames Water’s Stuart White described the fatberg as ‘repulsively human’ saying the fascination with it comes from the fact its a product of ‘our own modern-day living’.

The work to remove the fatberg involved an eight-man crew who removed 20 to 30 tonnes per shift using a jet hose.

What is a fatberg? The monstrous wad of fat, grease and oil that clogs up sewers across the country

Fatbergs are blockages made up of flushed fat, oil, grease and other flushed waste such as wet wipes and illegal drugs.

They form into huge concrete-like slabs and can be found beneath almost every UK city, growing larger with every flush.

They also include food wrappers and human waste and can block tunnels, raising the risk of sewage flooding into homes. 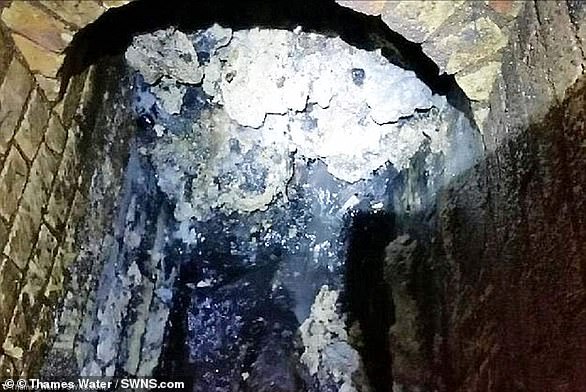 The largest ever fatberg discovered in the UK was a 750-metre (2,460ft) monster found under London’s South Bank in 2017 (pictured)

Fatbergs can grow metres tall and hundreds of metres long, with water providers last year declaring an epidemic of fatberg emergencies in 23 UK cities, costing tens of millions of pounds to remove.

Fatbergs take weeks to remove and form when people put things they shouldn’t down sinks and toilets.

Scientists have, however, found a use for the waste material turning large portions of it into biodiesel.

The mass of waste found in London was enough to produce 10,000 litres of biodiesel, which would power 350 double decker buses for a whole day.