Simone Biles may be the greatest gymnast of all time, but she still has some work to do when it comes to her beer bong skills.

The 24-year-old Olympian took to her Instagram Stories on Wednesday night to share a hilarious video of her boyfriend, Houston Texans safety Jonathan Owens, trying to teach her how to funnel a beer.

‘My first bong attempt. I clearly didn’t go to college. I need some work/help,’ she captioned the clip, which shows her spitting up all over herself.

Having fun: Simone Biles, 24, took to her Instagram Stories on Wednesday to share a hilarious video of herself trying her first beer bong 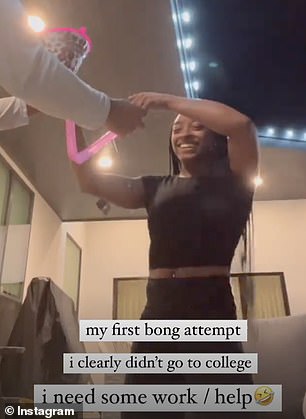 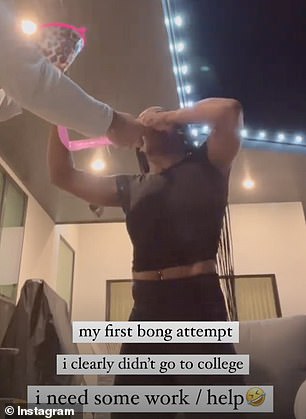 Now this is gold! Biles’s boyfriend, Houston Texans safety Jonathan Owens, held the leopard-print funnel over her head as they practiced outside 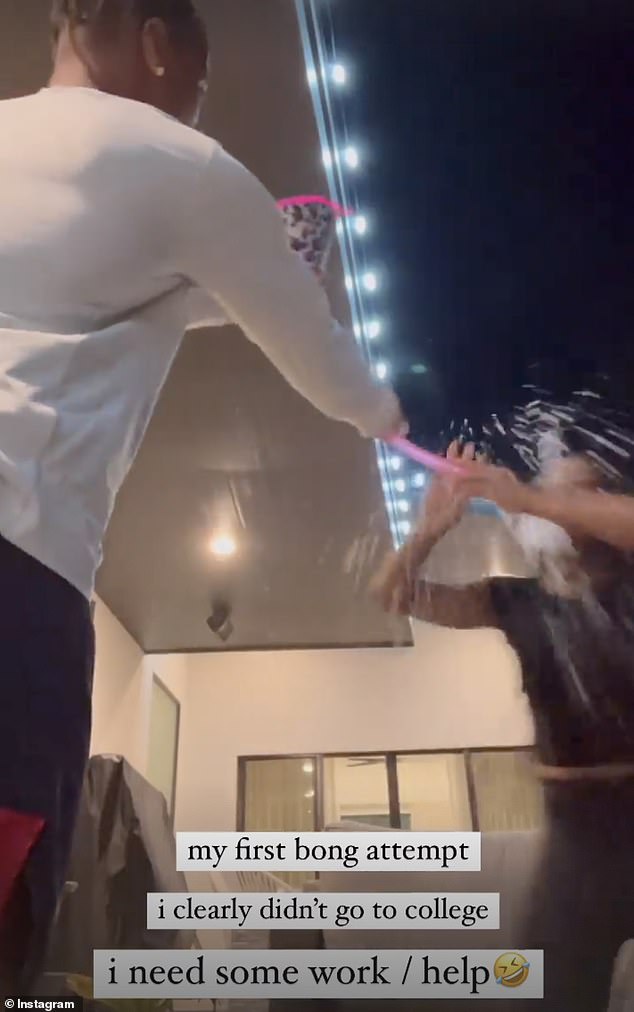 Not quote a perfect 10: The Olympic gymnast ended up spitting up all over herself

Biles, who appeared to be excited to try out the drinking advice, had a smile on her face when she put the leopard-print funnel’s pink tube to her mouth, but the expectation did not meet reality.

Owens, 26, counted to three before lifting the funnel — and then disaster ensued. Biles immediately started to choke and got it all over herself before she ran away.

‘Oh my God, this is carbonated!’ she yelled off camera.

‘I told you!’ the NFL star replied. ‘You gotta be ready.’

It’s unclear what was in the funnel, but the athlete insisted she wasn’t going to be able to get it down.

Biles was a good sport, though, and decided to try it again with far less liquid. She managed to get a gulp down, but Owens wasn’t impressed.

‘That was terrible!’ he joked to the camera. 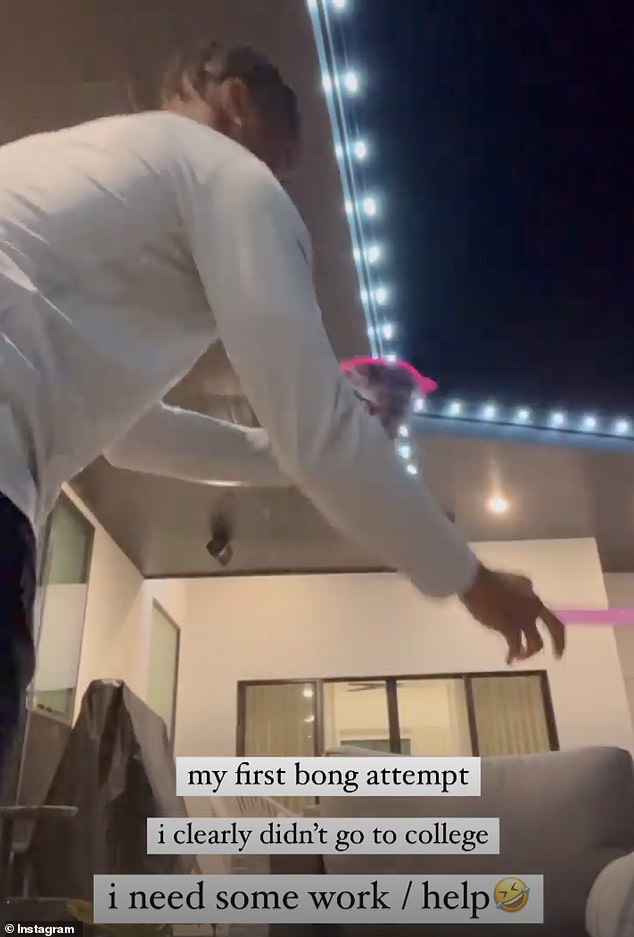 Shocked: Biles ran away, yelling: ‘Oh my God, this is carbonated!’ It’s unclear what was in the funnel, but the athlete insisted she wasn’t going to be able to get it down 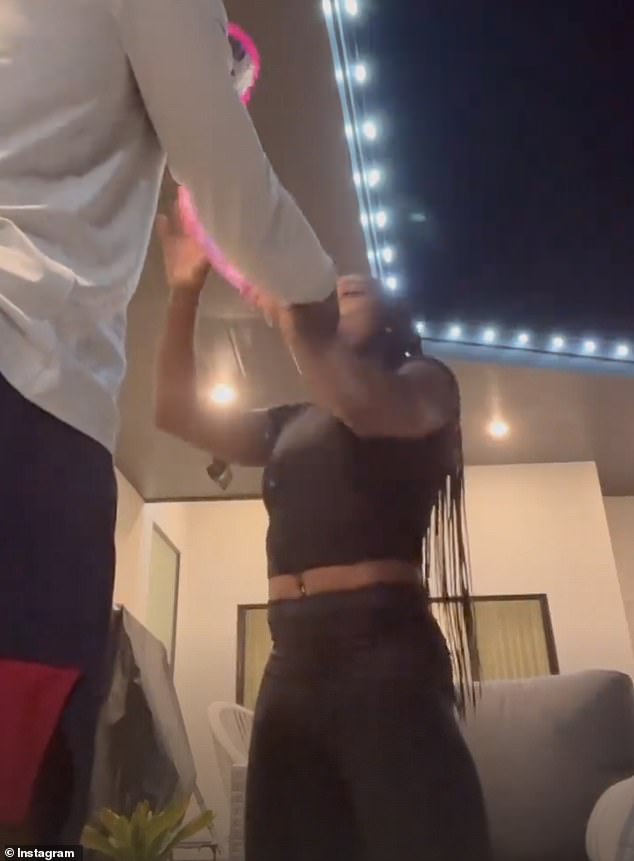 Going for it: Biles was a good sport, though, and decided to try it again with far less liquid. She managed to get a gulp down 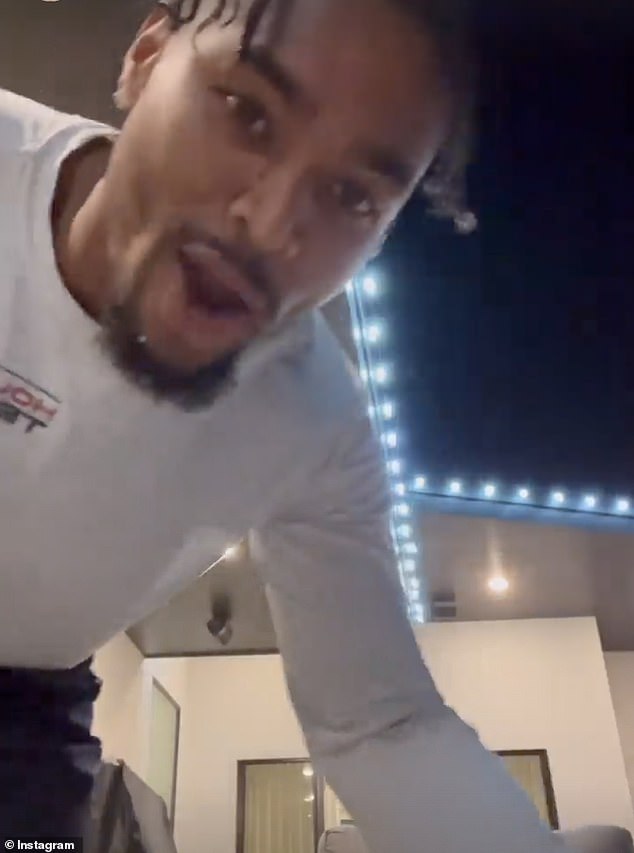 Too funny: However, Owens wasn’t impressed. ‘That was terrible!’ he joked to the camera

The day after the gymnast’s first beef bong attempt, it was revealed that she is gracing at least one more magazine cover before the end of 2021.

Biles, Nikole Hannah-Jones, and Lizzo each appear on their own covers of Essence magazine’s November/December ‘Year of Radical Self-Care’ issue celebrating women who have prioritized their mental health over society expectations.

In her cover story, titled ‘More Than a Medal,’ she opened up about her decision to withdraw from four out of five event finals at the 2020 Tokyo Olympics to focus on her mental health.

‘I definitely knew any stand I took would be a little bit bigger than itself,’ she said. ‘At the end of the day, we’re humans. We’re not just athletes. We’re not just here for entertainment.’

At the time, she said she was suffering from something called ‘the twisties’ — a dangerous mental block that causes gymnasts to feel like they are ‘lost in the air.’

‘I feel content with what I did and how I made the decision,’ she said. 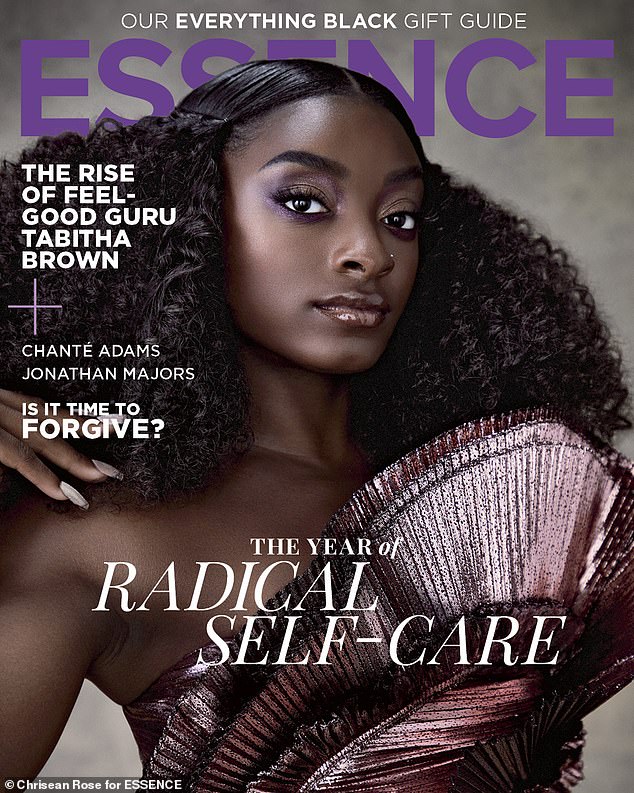 Cover star: The day after the gymnast’s first beef bong attempt, it was revealed that she is starring at least one more 2020 magazine cover 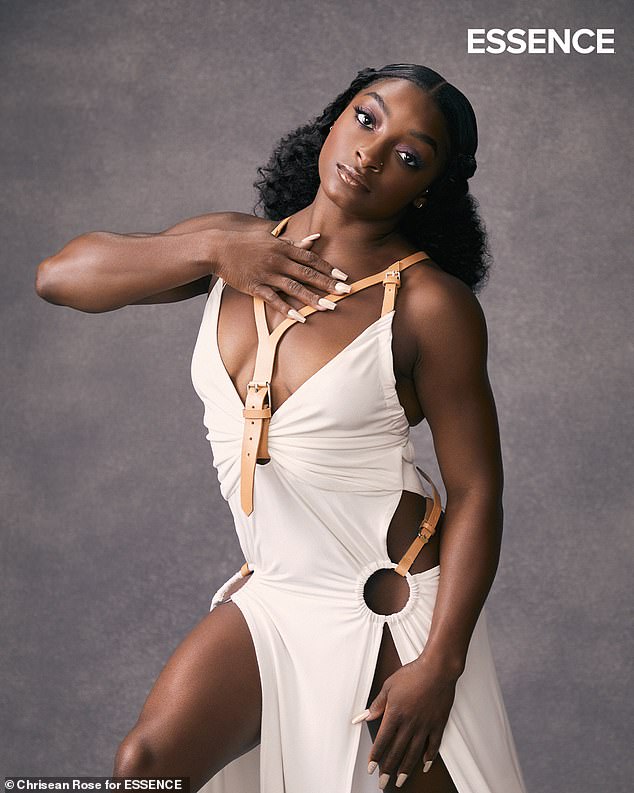 Candid: In her cover story, titled ‘More Than a Medal,’ she opened up about her decision to withdraw from four event finals at the 2020 Tokyo Olympics to focus on her mental health 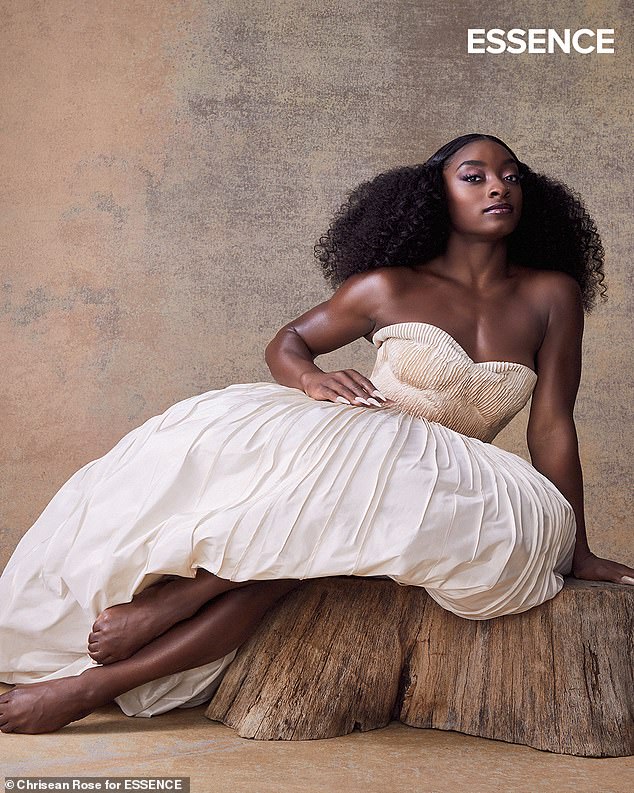 Earlier this month, Biles revealed that she is ready ‘step away’ from gymnastics once and for all, forgoing a chance to achieve further gold medal success at the Paris 2024 Games.

She has wracked up seven Olympic medals over the years — four gold, one silver, and two bronze — making her one of the most decorated gymnasts of all time.

The Olympian told US Weekly in a new interview that she has ‘suffered and continues to suffer’ because USA Gymnastics didn’t do ‘what was necessary to protect her’ from former team doctor Larry Nassar’s sexual abuse.

‘Everything that I’ve been through with the organization of USAG just makes for a sticky situation,’ she told the outlet. ‘It just sucks. And it’s, like, I love the sport so much, but I feel like it’s just a hit to the gut every time something comes out or new information has been revealed.

‘We suffered and continue to suffer, because no one at FBI, USAG, or the USOPC did what was necessary to protect us.’

Nassar, who had worked as the USAG doctor for 18 years, had sexually assaulted at least 150 women, including Biles and fellow Team USA Olympians Aly Raisman, McKayla Maroney, and Jordyn Wieber.

The two-time Olympian had a disappointing run in Tokyo, where she dropped out of five event finals amid struggles with her mental health 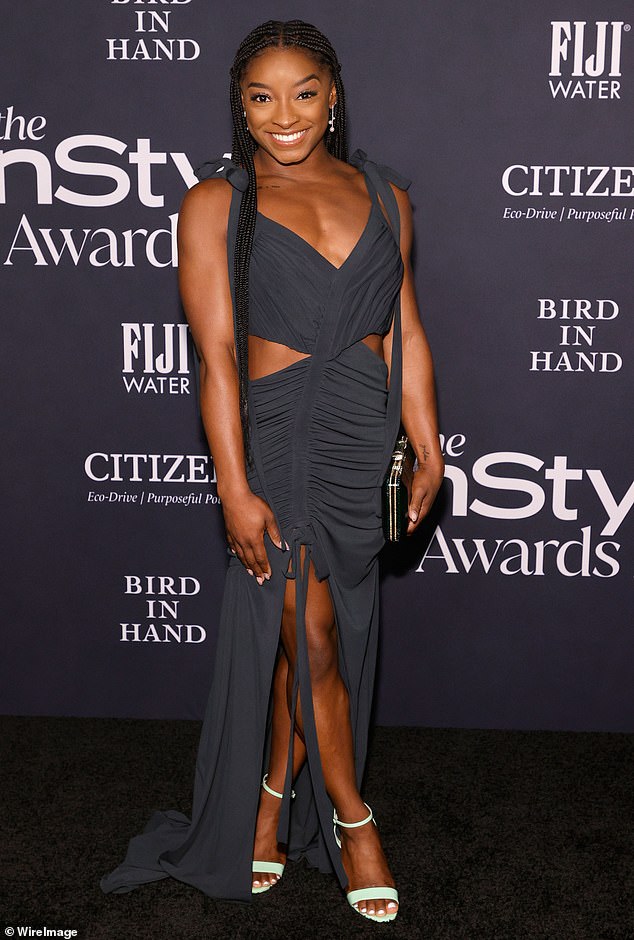 The athlete, see at the InStyle Awards on November 15, has yet to confirm whether or not she plans to compete for a place on the US team for the 2024 Olympics in Paris

The scandal surrounding the abuse case and its handling by USAG and the US Olympic and Paralympic Committee ((USOPC) has continued to spark controversy and outrage, with dozens of gymnasts blasting the organizations.

They each gave damning testimony before the Senate Judiciary Committee for its hearing looking into the FBI’s botched probe into Nassar’s sexual abuse.

Biles testified that she was failed by the FBI, USAG, and USOPC in its handling of Nassar’s abuse. She also opened up about the toll the abuse had taken on her, including her struggles at the Tokyo Olympic Games over the summer.

While speaking with Us Weekly, she admitted that she isn’t sure if she can move forward and continue to work with the organizations.

‘I love the sport. I love the people that I work with. I love the girls that I trained with, but those organizations, it’s just like — ugh,’ she said.

‘It’s just like a huge dumpster fire that we’re trying to get rid of and that I’m trying to stay as far away from so that my mental health can be intact and if I do decide to train again that I have a clean slate.’