A husband and wife on Reddit have taken the cake when it comes to the best couples costume of the season.

Reddit user NikkiGun shared a before and after photo of her and her husband that depicts the couple in their normal state versus their ‘bloodied’ state that was specially designed to give the illusion of a homemade face swap via a grisly surgical operation.

In the picture, both of their faces can be seen surrounded by a ring of blood, with the faces inside the circle recreated to model the other using make-up to draw facial hair on the wife, and lip gloss and a smoky eye on the husband to feign a female face.

Creepy couple: Reddit user NikkiGun posted a photo of her and her husband posing in their face swap’ for Halloween

NikkiGun even shaded a light beard on her face and tweezed her husband’s eyebrows to complete both of their looks.

One user commented that she just wanted an excuse to do her husband’s eyebrows to which she coyly said: ‘I plead the fifth.’

She did such a good job that another Reddit user said how fabulous her husband’s eyebrows and eyelashes looked in the photo. Nikki wasn’t shy about letting her envy be known and said: ‘The jealousy was so real.’

The transformation process took about an hour and a half for each of them but Nikki added in a comment on the site that ‘I am not a professional at all, though. I’m sure it would take a pro much less time’.

Regardless of how much time it took, people took to the comments section of the social news website to share their enthusiasm for the make-up success.

One user said: ‘This is actually the sickest couple costume I’ve seen. Well done!’ while another wanted to know how the husband felt about the makeover asking, ‘How does your husband feel now that he knows he makes a pretty attractive lady?’

Another user commented: ‘This hurts my brain, is there Photoshop being used?’ but Nikki assured him that it was all done with make-up and an ‘obliging husband’. 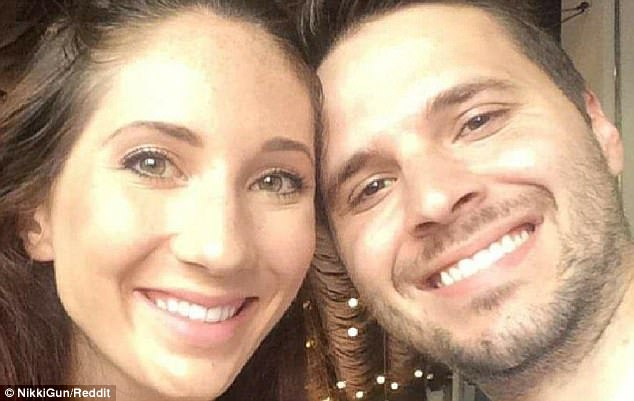 Pretty pair: NikkiGun got a lot of comments on her page admiring her make-up work on her and her husband

Nikki commented that she thought the attention had ‘gone to his head’ after he asked her if she remembered watching The Danish Girl, a movie about a transgender man who prepares to undergo a sex-change operation, and then stared off a little too forlornly’.

But even some members of the trans community took to share their admiration over the make-up job well done with one user saying: ‘But seriously as a trans person with no make-up skills I wish had some on to do make up on me.’

Nikki was flattered from the comments and had a few laughs at the ones poking fun at the face swap with one asking ‘What’s it like being married to yourself?’ and another paying her husband a compliment that said: ‘You have a pretty husband.’

Reddit user saburling said: ‘Bloody creative. I can see from his facial expression that it took some effort to convince him to do it – but seriously, you’ve got talent.’

But Nikki had to give partial credit to her husband because without him, the face swap just wouldn’t be complete. She said: ‘Really appreciate that! I’ve got a good sport of a husband for sure.’

Let’s hope he feels the same way next Halloween as his wife mostly likely already has an unrecognizable costume planned.