Handball law to be reworded in bid to end confusion

New wording on handball is set to be introduced next week in an attempt to end confusion over ‘deliberate’ contact with the ball.

Manchester City’s win over Schalke in the Champions League on Wednesday was marred by controversy when the video assistant referee (VAR) awarded a penalty against Nicolas Otamendi for handball, even though the City defender appeared to be trying to get his arm out of the way.

Last month, UEFA’s chief refereeing office Roberto Rosetti said officials would penalise handballs if defenders used their arms to make their bodies ‘bigger’ but a new wording of the handball law will be passed at a meeting of the International FA Board (IFAB) in Aberdeen on March 2.

David Elleray, the technical director of IFAB, told The Times: ‘The new text will clarify those situations where players can expect contact with the arms to be penalised and where they can expect not to be penalised. It will significantly reduce the grey areas around handball.

‘We will be identifying those areas were non-deliberate contact will be penalised and when it won’t be.

The referee initially gave a corner after the ball deflected off Otamendi but Schalke’s claims of handball were eventually backed up by the VAR after a confusing delay of more than three minutes.

There was no clarity on whether Otamendi had handled deliberately and, adding to the farce, the referee could not review the incident himself as the pitchside monitor was broken. 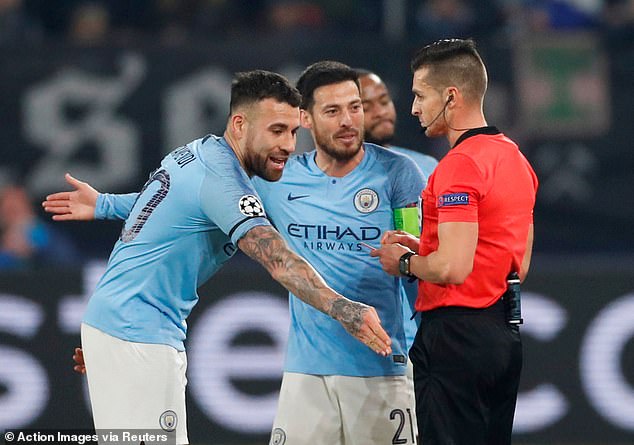