The Duke and Duchess of Sussex appeared delighted to be reunited with the cast of Hamilton tonight as they prepared to watch the actors perform for the third time.

Harry, 34, and Meghan, 37, beamed as they greeted stage stars Jamael Westman and Rachel John in the line-up before the Royal Variety Performance at the London Palladium, clearly pleased to see the familiar faces.

The Duchess smiled and said ‘thank you’ as the two cast members congratulated her pregnancy, before they had to make their excuses and dash off as they were set to perform first.

Harry and Meghan, who are expecting their first child together next spring, have left little doubt about their love for the hit musical, having already watched it twice on the West End in the last ten months. 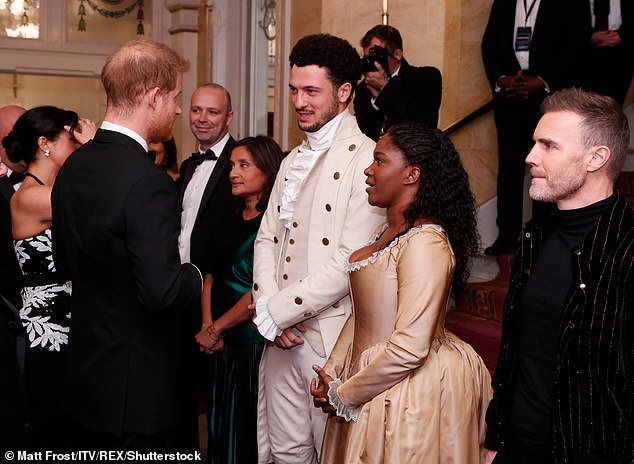 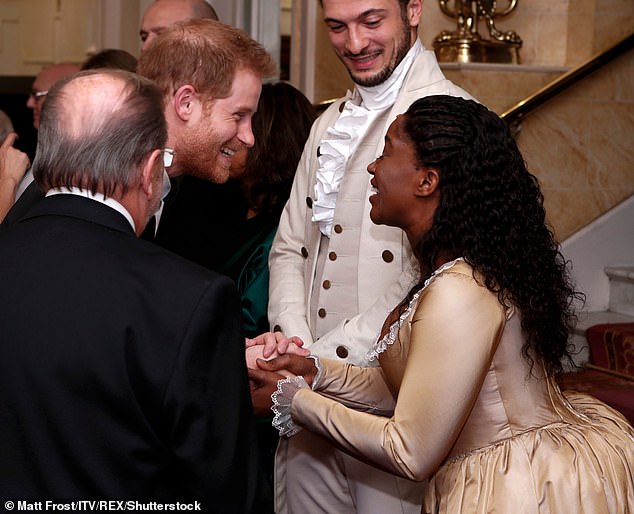 The couple first watched the musical, which originated on Broadway before transferring to London, on an unofficial theatre date in February before attending a special charity performance with its creator, Lin Manuel Miranda, in August.

Meghan is also believed to have watched the show in New York with best friend Priyanka Chopra.

Pregnant Meghan, 37, donned a sparkling £895 top and flowing £850 black maxi skirt by London-based designer Safiyaa as she joined husband Prince Harry, 34, for the annual event at the London Palladium.

She smiled as she spoke to Westman and John in the theatre foyer, having previously met the pair on stage at a charity performance just three months ago. 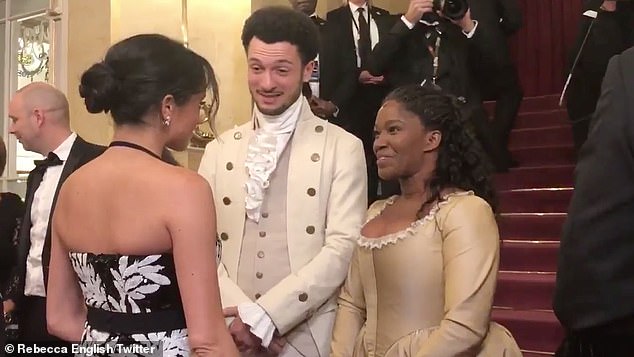 Meghan took time to speak with the two cast members from the hit musical, they chatted animatedly to the Duchess who was dressed in a sparkling £895 top and flowing £850 black maxi skirt by London-based designer Safiyaa 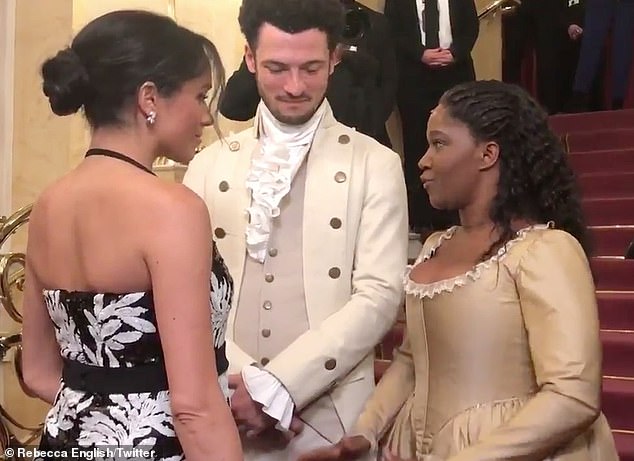 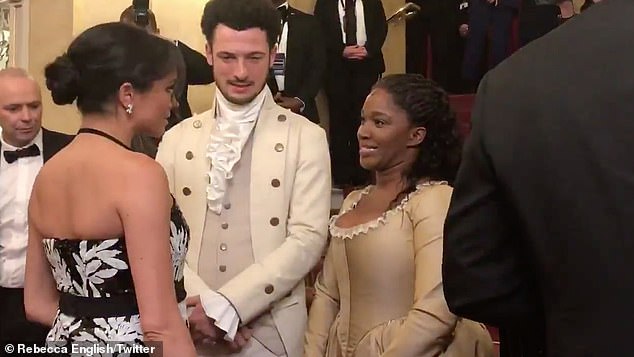 Hamilton has enjoyed resounding success in the UK, with Meghan going along with Harry to see the show both in February and August 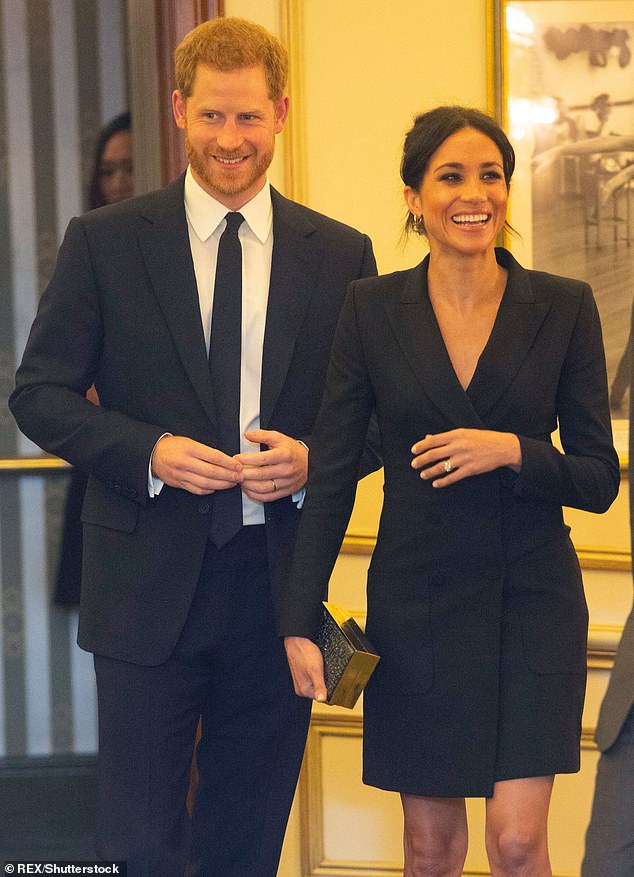 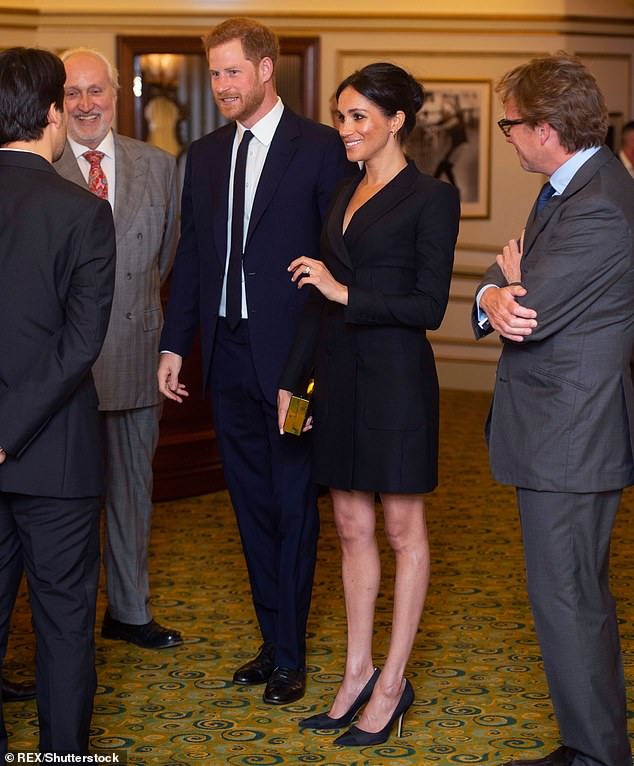 Meghan showed off her toned legs in a £327 dress by Canadian label Judith and Charles and Paul Andrew pumps for the occasion, while her husband Harry, 34, looked smart in a suit and tie 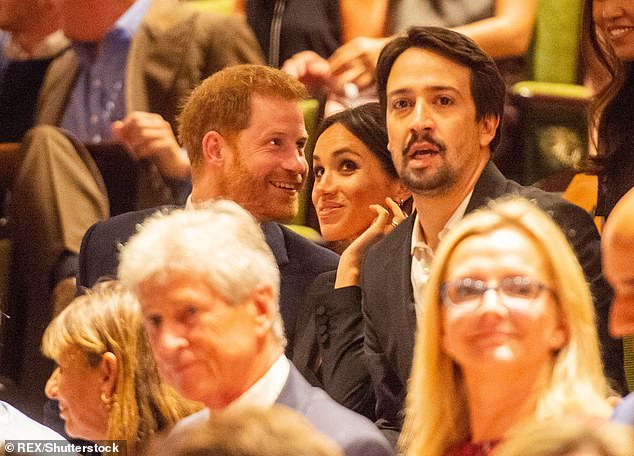 The royal couple were introduced to the show’s award-winning creator, Lin-Manuel Miranda (pictured right), and his wife Vanessa Nadal before the group took their seats in the theatre’s Royal Circle

The special performance in August was held to benefit Prince Harry’s charity Sentebale, which works with children and young people affected by HIV in southern Africa.

Meghan showed off her fashion prowess and her toned legs in a £327 tuxedo dress by Canadian label Judith and Charles and Paul Andrew pumps for the occasion back in summer.

The couple were introduced to the show’s award-winning creator, Lin-Manuel Miranda, and his wife Vanessa Nadal before the group took their seats in the theatre’s Royal Circle. 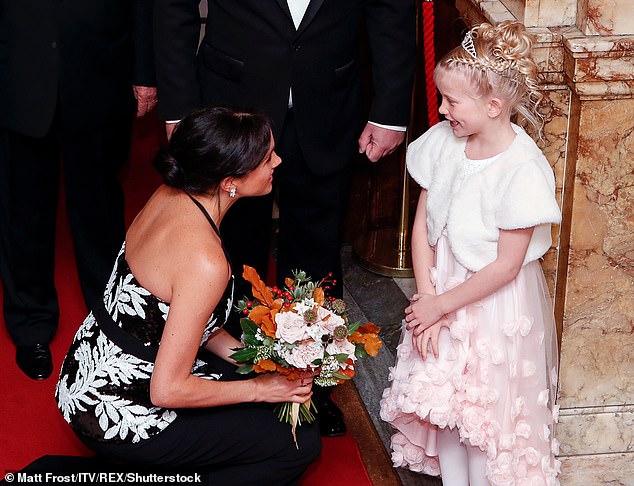 The radiant royal beamed as she was greeted by seven-year-old Darcie-Rae Moyse, of Berkshire, who presented her with a beautiful posy of winter blooms 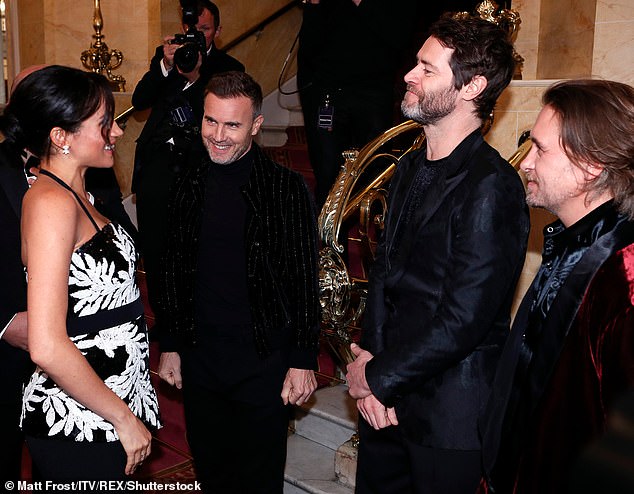 Once inside the Duchess met performers, including Take That’s Gary Barlow, Howard Donald and Mark Owen 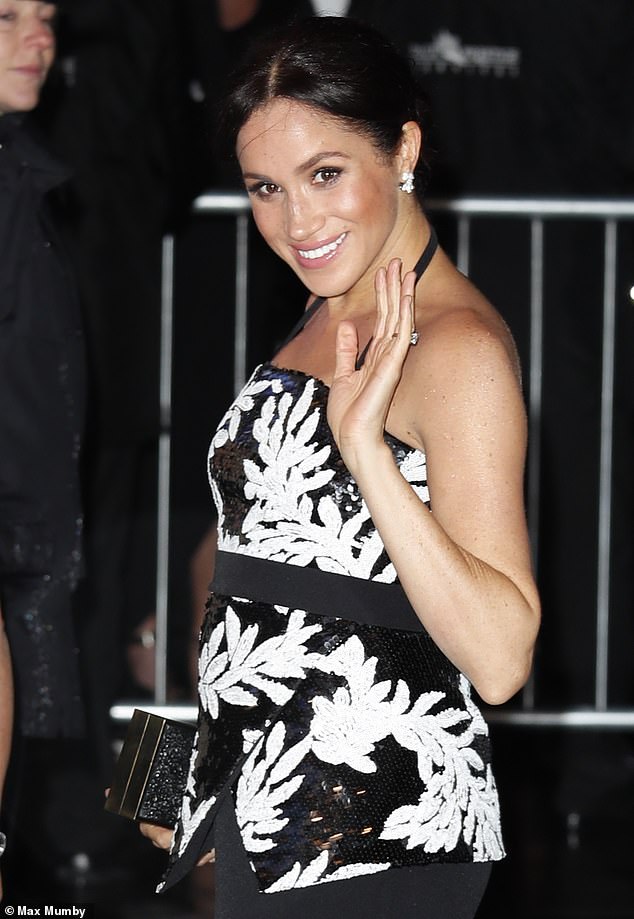 Prince Harry then took to the stage with the cast where he burst into song himself with a rendition of You’ll Be Back – sung by the character of his ancestor George III in the musical.

Their unofficial visit earlier this year was documented by members of an excited Hamilton who eagerly posted about it on Twitter.

It opened to rave reviews in Broadway, winning Miranda a slew of awards, before transferring to London earlier this year.

The $10 founding father who was killed in a duel by a Vice President: Who was Alexander Hamilton? 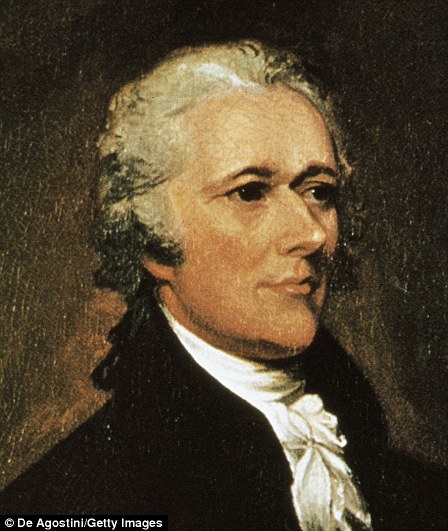 He was born out of wedlock, stained his reputation with an extra-marital affair and was mortally wounded in a duel.

In between, U.S. Founding Father Alexander Hamilton, the first Treasury Secretary, laid the foundations of a modern financial system by establishing a national bank, securities markets and the mint.

Crucially, the soldier turned political philosopher also knitted America together by having the federal government assume state debts incurred during the American Revolution in return for being granted expanded fiscal powers.

Hamilton was born on January 11, 1755, on the Caribbean island of Nevis. His father was a Scottish immigrant and his mother, who was married to someone else, was British West Indian.

Although essentially orphaned at age 13 when his mother died, he made it to the colonies aged 15 to further his education.

Hamilton was largely influential behind the ratification of the Constitution, due in part to backing the Federalist Papers.

He was one of the first American politicians to have a highly sex scandal with housewife Maria Reynolds.

She and her husband plotted the affair in order to scam Hamilton out of large sums of money.

Hamilton died from a gunshot wound in a duel with Vice President Aaron Burr on July 11, 1804.