Get out in the sun! Vitamin D deficiency caused by a lack of sunlight may lead to weaker muscles, study on mice shows

If you feel too much like Popeye before the can of spinach, you might want to get out in the sun more — as vitamin D deficiency may weaken muscles, a study warned.

The so-called ‘sunshine vitamin’ — also found in foods like oily fish, egg yolks, cheese and mushrooms — has long been known to play a role in bone strength.

However, in experiments on mice, Australian researchers found that not getting enough vitamin D lowered the function of the mitochondria that power muscles.

Furthermore, the findings suggest that preventing vitamin D deficiencies in older adults may have the potential to help stave off age-related muscular degeneration.

Recent studies have suggested that around four-in-ten people in European populations may suffer from vitamin D deficiency.

Such has also been suggested to be linked with an increase risk of various conditions — including cancer, COVID-19 and diabetes.

If you feel too much like Popeye before the can of spinach, you might want to get out in the sun more — as vitamin D deficiency may weaken muscles, a study warned (stock image)

‘Our results show there is a clear link between vitamin D deficiency and oxidative capacity in skeletal muscle,’ said paper author and metabolism expert Andrew Philp of the Garvan Institute of Medical Research in Darlinghurst, Australia.

‘They suggest that vitamin D deficiency decreases mitochondrial function, as opposed to reducing the number of mitochondria in skeletal muscle.’

‘We are particularly interested to examine whether this reduction in mitochondrial function may be a cause of age related loss in skeletal muscle mass and function.’

In their study, Dr Philp and colleagues explored the effect of diet-induced vitamin D deficiency on the function of skeletal muscle mitochondria in young male mice.

While the deficiency induced in the mice was more extreme, it remained within the clinically-recognised range, the team added.

Both blood and tissue samples were taken from the mice on a monthly basis in order to determine both vitamin D and calcium concentrations as well as mitochondrial numbers and levels of function.

After the three months were up, the team found that the function of mitochondria in skeletal muscle was impaired by up to 37 per cent — and that such was neither due to a reduction in mitochondria numbers or muscle mass reduction.

The findings suggest that inadequate levels of vitamin D may lead to a reduction in the amount of energy muscles can produce — which, in turn, may lead to poor muscle function.

Given this, the researchers said, preventing vitamin D deficiency in older people may help maintain muscle performance and reduce the risk of related diseases such as sarcopenia, the progressive loss of skeletal muscle mass and strength. 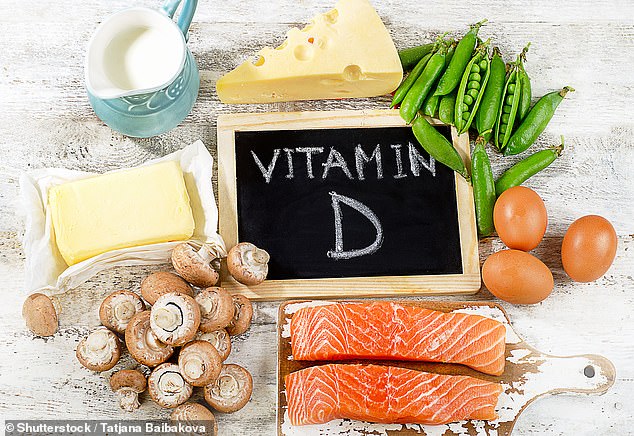 The so-called ‘sunshine vitamin’ — also found in foods like oily fish, egg yolks, cheese and mushrooms — has long been known to play a role in bone strength (stock image)

With their initial study complete, the researchers are now looking to establish exactly how vitamin D deficiency served to influence mitochondrial control and function in skeletal muscle in the mice.

Further studies will also be need, they added, to investigate direct effect of vitamin D deficiency on muscle function and strength in humans.

The full findings of the study were published in the Journal of Endocrinology.

HOW VITAMIN D DEFICIENCY CAN AFFECT THE HUMAN BODY