Helen Dunmore wrote a heart-stirring poem to her family

When the poet and novelist Helen Dunmore died of cancer eight months ago, her abiding legacy was the body of literature for which she will be remembered.

But more than that, in the last days of her illness she wrote a poem to the family she adored — the husband and two children she was about to leave — which reassured them that she did not fear her imminent death.

It was her final act of kindness and love.

‘It was May 25, 11 days before Mum died,’ her daughter Tess Charnley recalls. ‘My brother Patrick was walking past her bedroom and he saw her typing into her phone. He said, “Mum, are you OK?” And she said, “Oh, my darling, I’m just writing a poem.”

‘She told us, “Check your email — there’s something for you,” and it was this incredibly moving poem, Hold Out Your Arms, about death being a motherly force rather than something to be afraid of. We found it very comforting because she was telling us she was at peace with death.’

Tess Charnley pictured with her mother Helen Dunmore, has shared the heartfelt poem her mother wrote to her children in the final days of her life

The poem begins, not with fear, but with a sense of release: Death, hold out your arms for me. Embrace me. Give me your motherly caress. Through all this suffering you have not forgotten me.

‘It’s hard for me at the age I am — I’m 24 — to think of death as anything but terrifying, but Mum dealt with it with such grace,’ says Tess. ‘And I was enormously impressed that she was writing poetry like that when she was so ill. I know she wrote it to comfort us, but I genuinely don’t believe she was afraid.

‘She said all the poems in her final collection came to her fully formed. And when I read them I hear her voice coming through very strongly, as if through a medium, and that, too, is a comfort. It gives her a sort of immortality.

‘I think my mum was the most amazing person. People worry about their loved ones being forgotten, but I don’t think it will happen with her because her work has moved so many people.

‘Death is so taboo, and not long ago cancer was something people never talked about. But Mum wrote about it as not a wholly negative experience — and this has reassured us, and so many other people as well.’

This final, moving poem was added to Dunmore’s last collection of poetry, entitled Inside The Wave, which recently earned her the Costa Book of the Year Award.

Just 64 when she died, she is only the second author — after the poet Ted Hughes — to win the award posthumously, and hers is only the eighth poetry collection to take the top prize since the award began in 1971.

Tess was at the ceremony with her dad Frank, a retired solicitor, and Patrick, 36, a lawyer, who accepted the award on Helen’s behalf.

‘Poetry was in Mum’s soul,’ Patrick said. ‘This collection contains some of the most beautiful writing she completed in her life, and it came at the time of her death. It is so personal and so wonderful, we hope it will touch a lot of people who face this thing that we all do.’

Tess, who wore a striking red velvet dress for the ceremony (Helen loved velvet), says: ‘It was such a shock — but a wonderful one — when Mum won the overall prize. My eyes suddenly filled with tears. I’ve never felt such a huge rush of pride in my life. Mum, in her quiet, modest way, would have been thrilled.’

‘Some people don’t find poetry accessible,’ she says, ‘and it’s a mark of how well Mum has done that everyone can tap in to something in her last collection, because she wrote so honestly about a universal subject.’

Dunmore wrote, almost until her last breath, about a world poised between life and death, but did so with elegance, hope and even humour.

‘When she got her terminal diagnosis, around August [2016], she and my brother were talking, having a long phone call about what it all might mean, and the next day Mum sent him an email,’ Tess recalls. 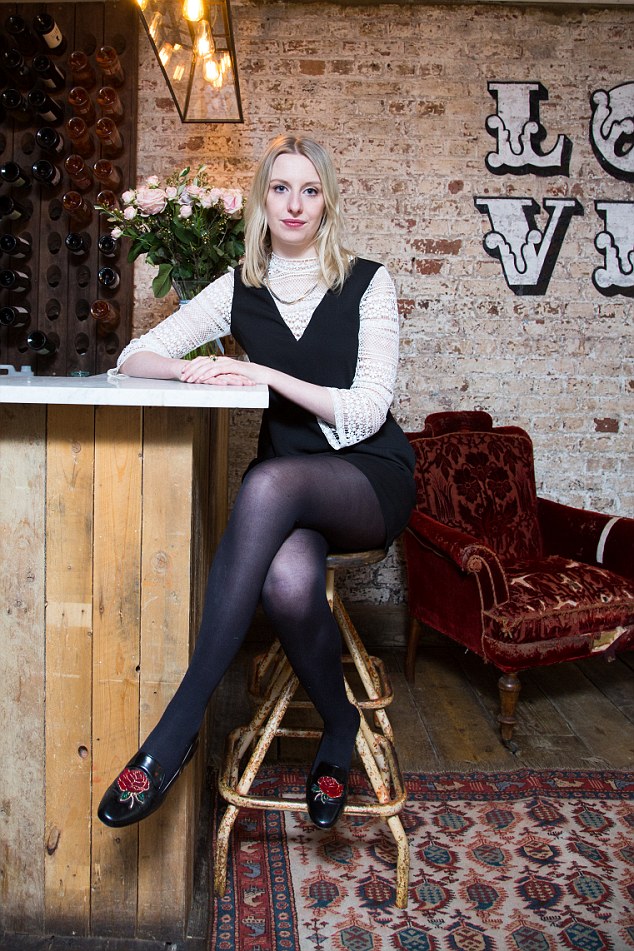 Tess Charnley (pictured) shared how her mother had sent all of her family the touching poem via email, writing: ‘Darling, check your email. There’s something for you’

‘She said “I wrote this poem after our chat” and it contained the lines, “I know I am dying, but why not keep flowering, As long as I can, from my cut stem?”

‘Patrick went for a really long run then, and felt uplifted. It was incredibly reassuring. Mum was the most generous person and she always thought of others before herself. During her illness she was much more concerned about cheering us up. She was extremely positive. She just loved life and had such a good outlook.

‘She prized really small things. My oldest friend from university, Lucy, had never met her and when we knew Mum was going to die, she came to dinner.

‘I remember Mum saying, “Oh, isn’t he brave?” and she was referring to a snail that had climbed high up a wall. It summed up how she was. She wrote so much about the minutiae of life.

‘But she was never just a writer. She was a mum and a writer; a friend and a writer. But she valued motherhood, her family and friendships above everything.’

When Tess learnt that her mum didn’t have long to live, she had just graduated from Exeter University and had intended to start a masters degree in London.

Instead she deferred it to come back to Bristol, where her parents lived in a Victorian house in Cliftonwood, so that she could be near her mum.

Tess stayed in Helen’s office — a little studio flat eight floors up in a Bristol tower block that her Dad calls the Bird’s Nest — so she could pop round regularly to the family home where Helen spent her last days.

Meanwhile, she took a job managing St Peter’s Hospice shop in Bristol. It was fitting because the charity looked after her mum.

‘You feel quite out of control at times like that,’ she says, ‘so it was good to be helping, even if not directly.’

The office, she says, far from feeling dismal and empty, was replete with happy memories. Her mum had decamped there to work when she was a child — while Tess stayed with a childminder who remains a close family friend — and sometimes, as a little girl, she would have sleepovers there.

‘If Mum was working late we’d stay there together, and it was such fun. We always used to listen to the Carpenters’ song Close To You and dance round together. I listen to it still. I think of it as our song — and it was the first record she bought Patrick, too, so it has lovely associations for him as well.

‘It doesn’t make me sad when I play it now. I love listening to it and thinking of her and how we’d laugh like drains together.

‘When she was ill, I’d go round to our house to see her and we’d sit together on the sofa holding hands. We always did. And, of course, I held her hand as she got towards the end.’

Tess, like her mum, is tall and slender as a lily stem. Poised and elegant, she talks with eloquence, courage and careful restraint. At times her eyes blur with tears. Quietly she leaves the room, composes herself and returns.

She, too, writes poetry while she studies for a masters degree in contemporary art theory and works in two London art galleries.

She wears two of Helen’s rings, a diamond and an emerald, both presents from Frank. Her mum’s presence hovers round us, even in the perfume Tess wears — Chanel No 5, which was one of Helen’s perennial favourites.

This scent, too, has a special resonance. Soon after Tess was born her mum wrote a poem, both prescient and poignant, about the young adult her baby would one day grow into. It is called All The Things You Are Not Yet and predicts that she will, one day, wear her mum’s favourite Chanel perfume.

It looks forward to a time when her tiny daughter will fall in love; ‘saying to someone I don’t know: darling…’ and this, says Tess, ‘is so difficult to come to terms with,because she hasn’t met my eventual partner (there is no one at present) and she will not see my baby.’

The poem, however, is another source of solace. ‘I first read it when I was 18,’ says Tess, ‘and I’ve read it every week since. For me it just sums up the affection she showed me all the time.

‘It tells me she had real confidence in my future, which in turn gave me confidence. That’s a lovely thing. She is still very present to me. I think of her all the time.’

Helen and Frank had been married for 40 years when she died. Patrick and his wife Alexa blessed her with two adored grandchildren — Amber, six, and Blake, five — and she had another, Hugo, eight, by her beloved stepson Ollie, who had been in her life since he was a year old.

‘One of the things that does please me is that my grandchildren will be able to get to know me… through reading my books,’ Helen said in a Radio 4 interview after her cancer diagnosis.

And she did more. The last book she wrote in her Sea Dragon series for children features two children called Amber and Blake as the protagonists.

So their grandmother will be sewn into their childhood memories, just as her words dancing off pages of poetry and prose keep her alive for Tess.

After her mother’s funeral, Tess went to stay with Helen’s best friend Kate, a fashion designer, and her daughter Issy, who live on the island of Bali.

‘It’s people who love you and know your mum the most you want to be near,’ she says. ‘It was nice, because I’d been in Bristol for a year, to do something different, to go somewhere unfamiliar.’

Helen Dunmore had diverse talents. She spoke several languages — French, Italian, a bit of Russian — and she knew Latin.

She loved art, nature, flowers and, above all, the sea. The family have a home in St Ives in Cornwall, and Tess says ‘I have memories of mum sculling and floating on her back. She felt so happy there’.

Earlier this month, Tess spent her first birthday without her mother.

‘Last year, I was 99 per cent certain, would be the last birthday I’d have with Mum,’ she says. ‘She’d had the prognosis, and at 5am she sent me an email saying she hoped I’d be asleep — but I hadn’t been able to sleep — and it was incredibly full of love because she was remembering when I’d been born.’

This year, the family eventually rejected the idea of spending the day at St Ives, as their grief is too raw. ‘I don’t know if we were ready for Mum’s favourite place on my birthday,’ says Tess.

Instead they went to Kent, to another seaside less replete with poignant memories.

I ask Tess to describe her mum and she says: ‘She had such grace, kindness and generosity of spirit. She made everyone feel at ease and was genuinely interested in what people had to say.

She was never one of those people waiting for her chance to get into the conversation.

‘I miss chatting to her all the time. She knew me more than I know myself —so that’s a lot to lose, and there are still days when I pick up the phone and start to call her.’