A helicopter heading for New York that was carrying Ivanka Trump and Jared Kushner had to turn back to Washington D.C. after suffering an engine failure.

A report that was released on Sunday evening detailed how the chopper turned back to Ronald Reagan National Airport shortly after taking off on Thursday afternoon.

President Trump’s daughter and her husband, who also works as a senior adviser in the White House, ended up catching a commercial flight back to the city instead. 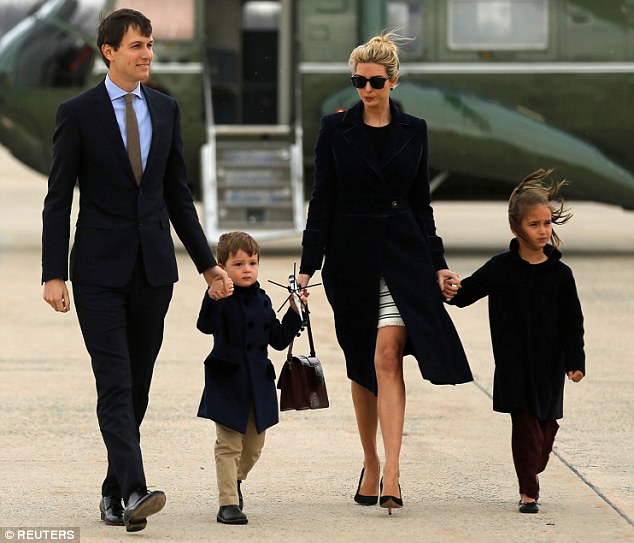 It is not clear whose helicopter Ivanka and Jared were on or why they took a helicopter instead of a plane. Here the couple are pictured boarding Marine One last March (file photo)

Information as to the type of helicopter Trump and Kushner were flying, nor their reason for heading up to New York were revealed. 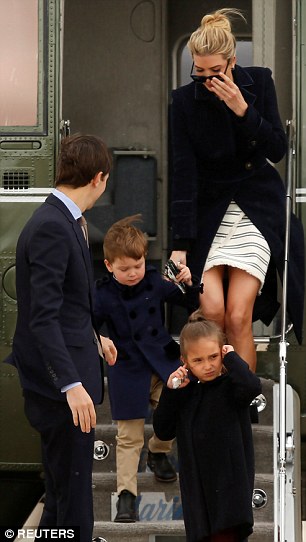 The couple ended up taking a commercial flight up to New York in the end. Here they are pictured with their children Joseph and Arabella in March 2017 (file photo)

Apart from the pilot, the only other person on board the aircraft was a member of their security detail.

On Monday, Ivanka and Republican Gov. Kim Reynolds will travel to Iowa to promote workforce development.

She will visit the Waukee Innovation and Learning Center in the Des Moines suburb of Waukee to promote the Trump administration’s infrastructure plan.

‘Workforce development is a critical part of our infrastructure proposal that the White House sent to Congress,’ Ivanka said Friday, according to the Des Moines Register.

‘Over the past year, Gov. Reynolds and I have worked closely on a number of workforce development initiatives. Gov. Reynolds serves on the task force for apprenticeship expansion and remains an important voice in discussions to increase K-12 STEM and computer science education nationwide,’ she added.

While Ivanka will be traveling to Iowa, Donald Trump and first lady Melania Trump will be in New Hampshire to talk about plans to combat the nation’s opioid crisis.