A hero bystander bystander managed to subdue an alleged knife-wielding attacker by putting a milk crate over his head at Wynyard train station just after 2pm on Tuesday.

Luke O’Shaughnessy and his brother Paul, who work nearby on King Street, heard the incident unfold out of their window and immediately ran out on the street.

The brothers told Daily Mail Australia they immediately noticed blood on the ground.

‘A guy said ‘he’s gone that way!’ and he was pretty quick, so we just ran after him, and ran straight down York Street and came over the road, and people were moving away,’ Paul said.

‘Apparently he was wielding a knife, I didn’t see that. But we ran straight over to the coffee shop and there was one guy already tussling with him.

‘Then Luke went over to him and gripped him and we pinned him down. We put a plastic crate over his head and restrained him’.

Paul said that while waiting for the police to arrive, the alleged attacker was shouting.

‘He’s got blood all over him … shouting religious statements,’ Mr O’Shaughnessy told reporters.

Luke O’Shaughnessy (right) managed to subdue the alleged attacker by putting a milk crate over his head, along with the help of his brother Paul (middle) and friend Lee Cuthbert (left) 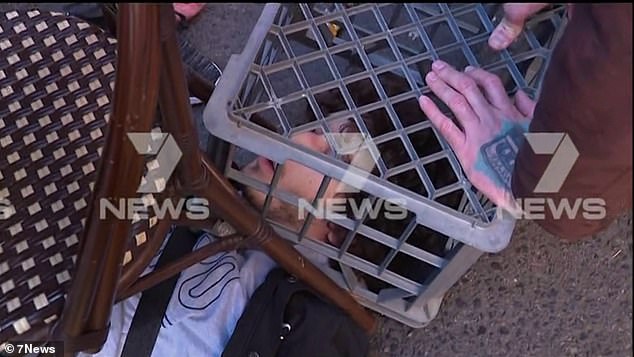 ‘Obviously there’s something clearly wrong with him, he didn’t look normal or anything like that’.

‘It was an intense moment. I’ve got a lot of emotion running high as well. It was pretty scary stuff’.

‘It was terrifying mate, it was really bad. I was just acting on instinct really. We all just kind of followed suit and just did what we could’.

‘He said ‘this is it!’ we kind of role played that there would be an attack in Sydney,’ Paul said. 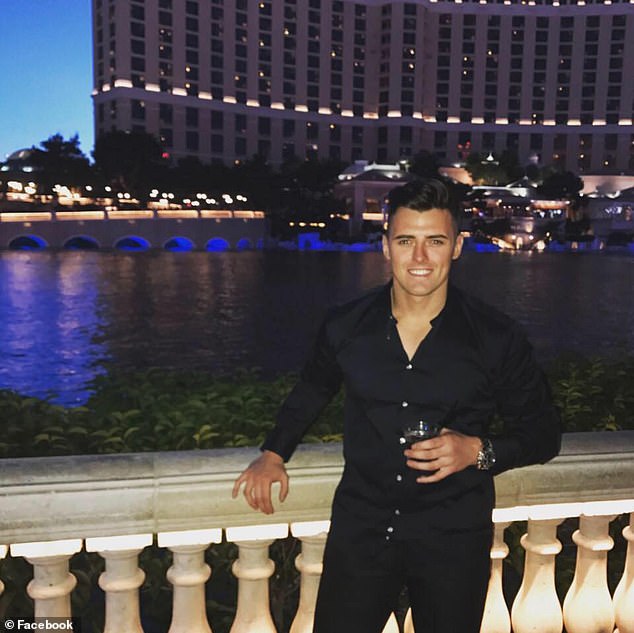 Luke O’Shaughnessy (pictured) and his brother Paul were at work on King Street when they heard shouting, and immediately ran to the scene and chased the alleged attacker

‘You thought about that the situation might happen just because all the other major cities have been attacked’.

Meanwhile, NSW Police on Tuesday afternoon said a man was in custody after a woman was stabbed in a hotel.

She’s been taken to hospital in a stable condition with a stab wound to her back.

Witnesses have told AAP a young man armed with a 30-centimetre kitchen knife had been yelling religious statements.

Police say it’s been reported he was yelling ‘Allahu Akbar’.

Witness Zak Barry said he saw the man fall down on York Street ‘and as he’s falling he dropped a kitchen knife’.

Video posted on Twitter shows the man yelled at police: ‘F***ing shoot me in the f***ing head’ before he was wrestled to the ground by bystanders and a milk crate was placed over his head.

‘A number of members of the public physically restrained the offender,’ Superintendent Gavin Wood said.

‘I want to acknowledge those members of the public who got involved. They were significantly brave people.’

Supt Wood said it appeared Tuesday’s attack was unprovoked and the man had acted alone.

A caller to 2GB radio confirmed the young man had been tackled to the ground.

‘He’s definitely been detained … he’s been taken away,’ the caller, Tom, said.

The woman was taken out of the Hotel CBD and placed into an ambulance.

‘So insane! A random dude just started stabbing people in the city right outside where we were having lunch,’ @JackHuddo said on Twitter.

An Uber driver said he saw people running away ‘and next thing I see this guy jumping over the car, he went over the bonnet, and went on top of the car’.

‘He had a little bit of blood on his shirt,’ the driver told 2GB.

NSW Police have set up a series of roadblocks in the area.

‘A number of crime scenes have been established,’ a spokesperson said.

Supt Wood said there was no ongoing threat after the man’s arrest.