Fashion fans queued up for nearly ten hours ahead of H&M’s latest desginer collaboration with Moshino, as items have already been put on sale on eBay.

Queues snaked along high streets in London as the Swedish chain launched its hotly-anticipated partnership with an Italian luxury brand.

But some of the items were already on eBay ahead of the 8am in-store UK launch, including a £300 leather biker jacket which was available on the website for £460.

More than 350 items were listed under ‘H&M Moschino’ on eBay this morning as fashionistas pay over the odds to get their hands on the new range. 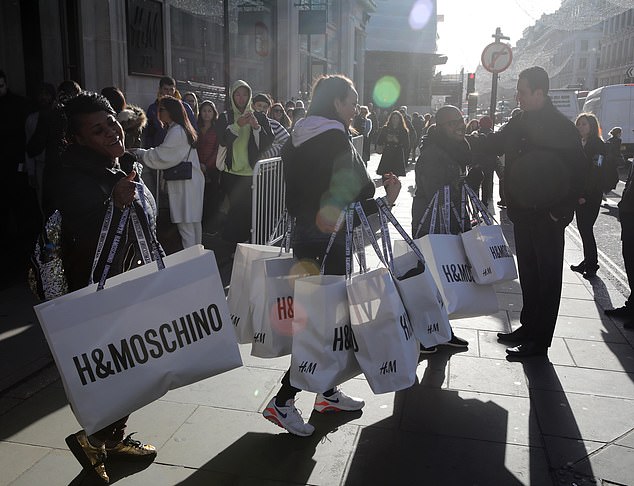 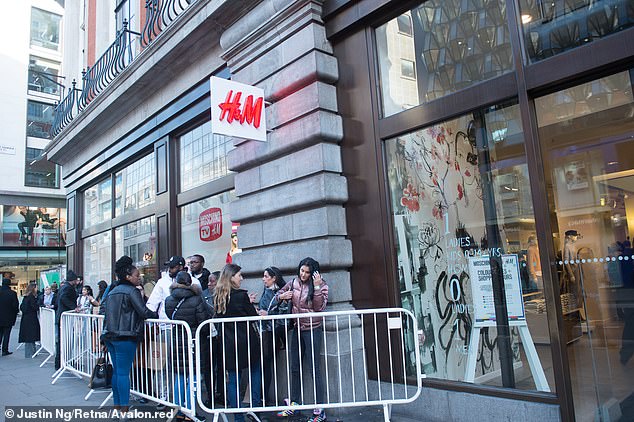 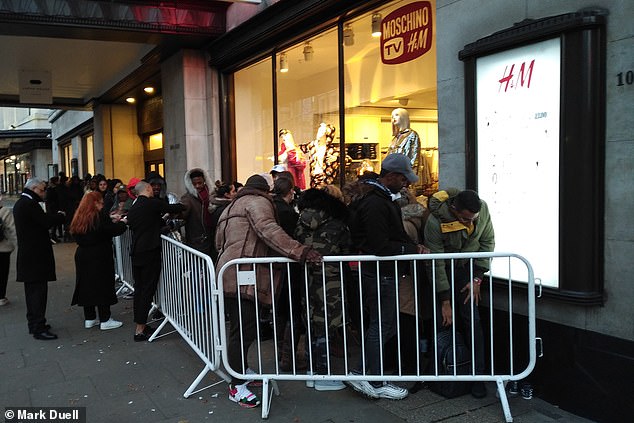 Shoppers at the front of the queue in Kensington, West London, had been there since 11.30pm 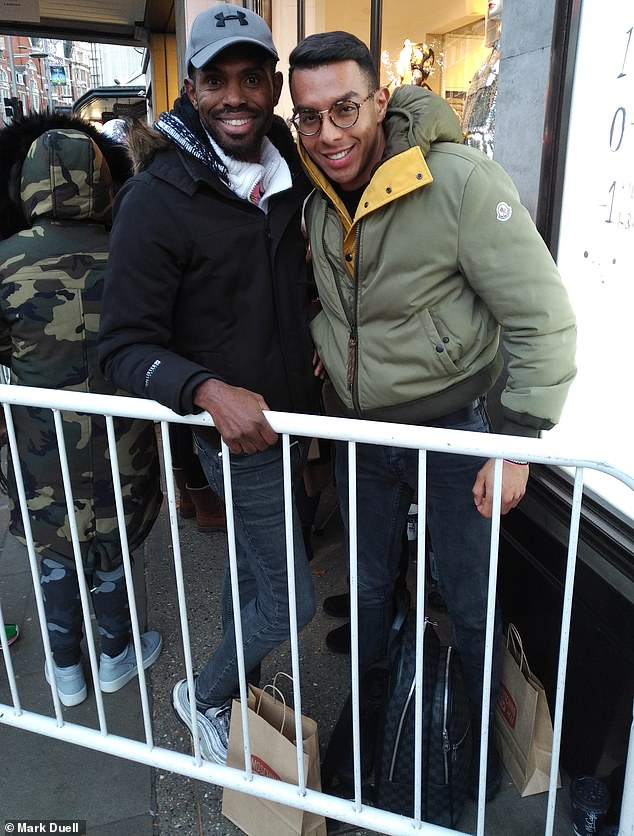 Friends Anderson Oliveria (left), 42, and Felipe Oliveria (right), 30, were at the front of the queue for the launch at H&M in Kensington today, having been there since 11.30pm last night

Even the goody bags handed out to the crowds – some of whom had been queuing outside in Kensington, West London, since 11.30pm last night – were on sale for £5.

H&M’s website crashed this morning as shoppers tried to order items but is now back online. A spokeswoman for the firm said if any customers had issues accessing the website they should contact customer service.

Felipe Oliveria, 30, who was at the front of the queue with his friend Anderson Oliveria, 42, told MailOnline today: ‘This is the first time I’ve done this in my life.

‘Just to have fun, really, just to get a piece. I want a specific piece, it’s a jacket. It will be my first piece, it’s around £100. It’s an experience of a lifetime.’

Felipe, who is originally from Brazil but has lived in London for eight years, added: ‘I do like Moschino, but he’s not my favourite. But I’m here just for fun.’

Also queuing up was Thomas De Lacey, 23, who said: ‘It’s exclusive and I buy Moschino anyway, so it’s quite cool that they do it for high street. 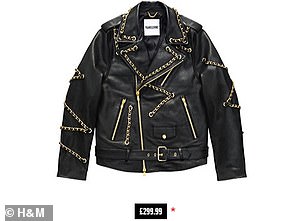 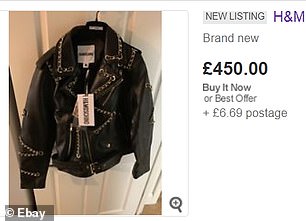 Some of the items were already on eBay ahead of the 8am in-store launch, including a £300 leather biker jacket (left) which was available on the auction website for £460 (right) 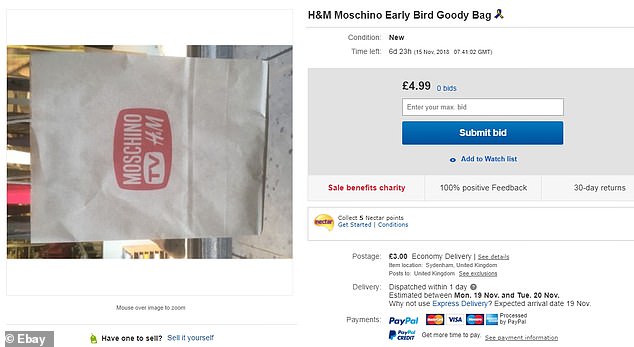 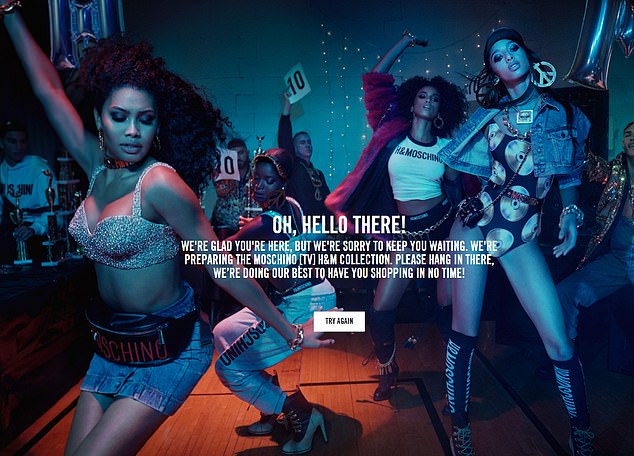 ‘But I always buy exclusive stuff. There was a big hype on it as well, so it makes it more appealing. I usually do it online because I don’t like these sort of things.

‘But I just live round the corner. I have a few of the Kim Jones Louis Vuitton pieces which were really hard to get, so it’s that exclusivity that I really like.’

Today’s launch of the Moschino range is just the latest in a succession of lucrative high-fashion collaborations for the Swedish high street giant.

H&M’s previous partnerships with Kenzo, Versace and Isabel Marant flew off the shelves with pieces being flogged for up to four times the price on eBay. 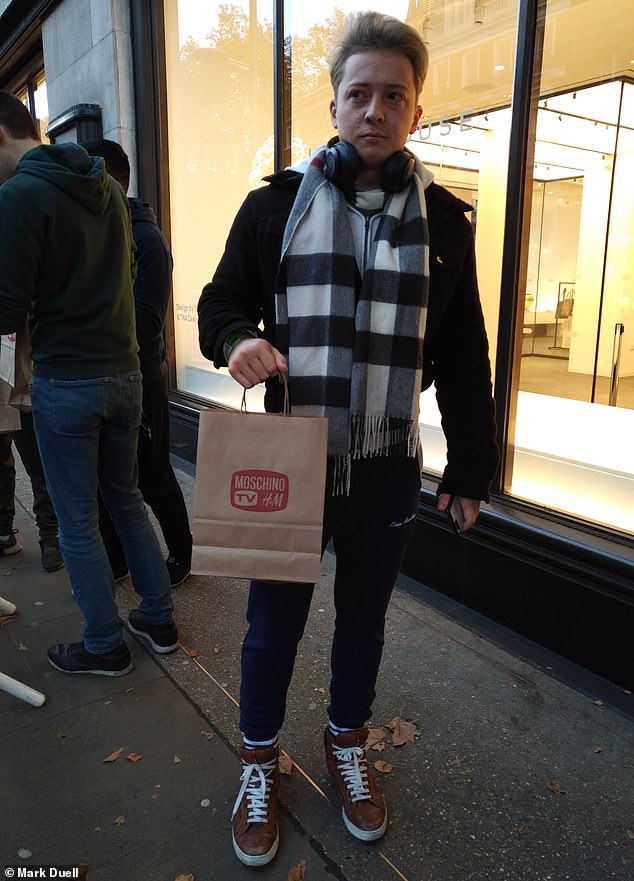 Thomas De Lacey, 23, who was also queuing in Kensington, was wearing Moschino clothes as he waited – and said: ‘It’s that exclusivity that I really like’ 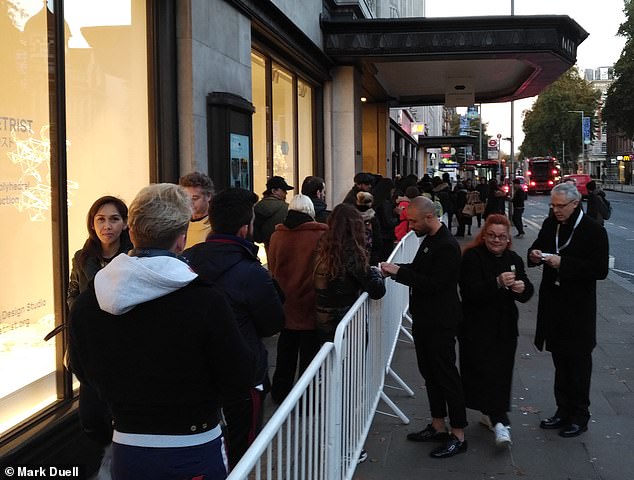 This is the first time I’ve done this in my life. It’s an experience of a lifetime

The flamboyant US designer told Femail of his H&M range, which starts at just £14.99: ‘I try to make people happy.

‘I love that I can give fans accessibility to my designs at a price point that’s totally affordable and totally available with global distribution – and without having to dilute the vision at all.’

UK shoppers will hope to bag a bargain from the new collection, with Moschino’s ready-to-wear pieces costing upwards of £800 for a dress, and coats at £1,000 plus.