Hillary Clinton gave a powerful, inspiration speech praising women ‘who are making their voices heard like never before’ this election year and then snubbed actress Cynthia Nixon to endorse Andrew Cuomo for New York governor.

‘I’m also really inspired by women who are making their voices heard like never before,’ she said to huge applause at the New York state Democratic convention at Hofstra University in New York on Wednesday.

At least 482 women are running for Congress or governor this year, according to the Center for American Women and Politics at Rutgers University, including Nixon , who, if elected, would be New York’s first woman governor and the second openly bisexual governor of any state. 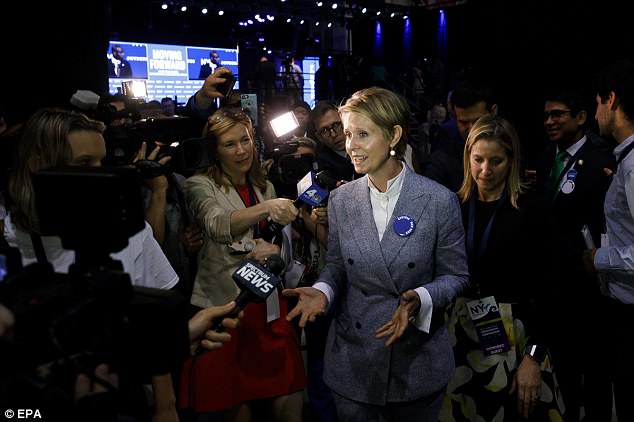 Cynthia Nixon was also at the state Democratic convention where Hillary Clinton spoke but here  meeting room  wasn’t equipped with a microphone. 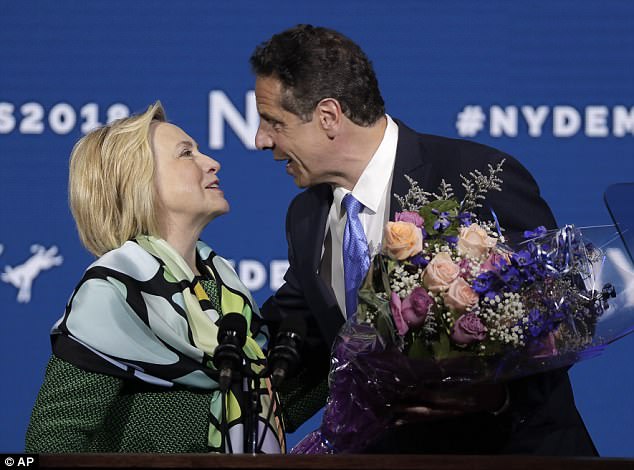 Andrew Cuomo rushed on stage after Hillary Clinton’s endorsement to give her a large bouquet of pink and purple roses and thank her for carrying the torch for women.

But while Clinton, who would have been the first female president if she had won in 2016, touted the work of suffragists like Elizabeth Cady Stanton, who fought for women’s right to vote at the Seneca Falls Convention in New York in 1848, she put her political weight behind Cuomo’s quest for a third term in the governor’s office.

‘We are lucky as New Yorkers because we stand on the shoulders of brave trail blazers and history makers, so our charge today is to pick up that torch, carry it high, carry it proudly,’ Clinton said, adding it’s ‘not for ourselves alone but for generations to come. We’re not going win every fight, take it from me, but if we stand together for the values we share we will get there together.’

Cuomo rushed on stage after Clinton’s remarks to give her a large bouquet of pink and purple roses and thank her for carrying the torch for women.

‘It was so inspirational. You talk about carrying the torch – you carried the torch,’ he said. ‘You are the one who really showed so many girls and women their potential and encouraged them to stand up.’

She praised Cuomo, who served as secretary of Housing and Urban Development under her husband’s administration, as someone with ‘his passion and determination.’

She described visiting Puerto Rico with him in 1998 after Hurricane Georges struck the island and noted: ‘I saw how committed he is to solving problems.’

She praised his work for Puerto Ricans, who are a huge minority presence in New York City and will be an important voting bloc in the September 13 Democratic gubernatorial primary.

Nixon was also at the state Democratic convention but her voice wasn’t heard as loudly as Clinton’s and Cuomo’s.

The meeting room assigned to the Progressive Caucus, where Nixon is popular figure, wasn’t equipped with a microphone, the New York Post reported.

The executive committee next door, which is controlled by Cuomo, had a sound system.

When the Post asked the ‘Sex and the City’ actress if she had gotten a fair shake, she laughed and said: ‘I think that it’s important to show up. It’s important that, at the Democratic convention, there is at least one actual Democrat running for governor.’

Cuomo won the party’s endorsement Wednesday with 95% of the vote. Nixon failed to close to the 25% she needed to guarantee her a spot on the primary ballot so she will have to gather signatures in order to appear. 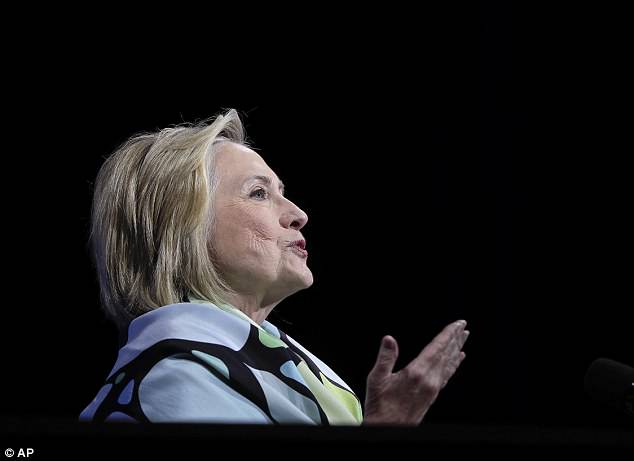 ‘We are lucky as New Yorkers because we stand on the shoulders of brave trail blazers and history makers,’  Hillary Clinton told New York Democrats at their state convention. 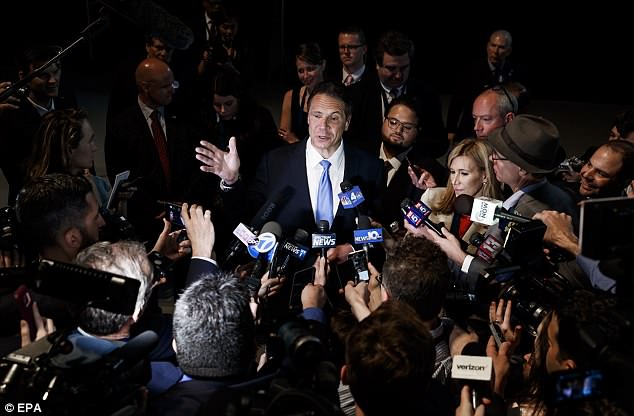 Andrew Cuomo praised Hillary Clinton: ‘It was so inspirational. You talk about carrying the torch – you carried the torch.’

Former secretary of state Madeleine Albright famously introduced Hillary Clinton at an event in New Hampshire during the 2016 Democratic presidential primary, telling the crowd: ‘There’s a special place in hell for women who don’t help each other!’

Clinton’s rival on the left, Bernie Sanders, ended up winning that state’s Democratic presidential primary although he ultimately lost the nomination to Clinton.

In her endorsement of Cuomo over Nixon, Clinton could face the wrath of the liberal left, who have not forgotten the post-2016 revelation from former Democratic National Committee chief Donna Brazile that the party worked to get Clinton the nomination over Sanders.

Sanders has not endorsed Nixon but the group he founded, Our Revolution, has backed her bid to oust Cuomo from the Democratic nomination.

Ironically, the ‘Sex and the City’ actress endorsed Clinton over Sanders in the 2016 contest.

‘I will be supportive of Hillary. I was an Obama supporter in 2008. I’m a Hillary person now,’ Nixon told Bloomberg News in 2015.

Clinton remains popular in New York, where she served as senator from 2001 to 2009.

She has not been too involved in the 2018 election however. She recorded a robo call for Georgia gubernatorial candidate Stacey Abrams, who won the party’s nomination Tuesday night and would be the nation’s first black governor if she wins election.

Cuomo is her first major endorsement.