Hochschild shares rebound as Peru scales back mine closure ambitions

Hochschild Mining shares are up more than 20 per cent today after the Peruvian government backed down on plans to rule out timeline extensions for mines in Ayacucho on environmental concerns.

The London-listed business, which saw its share price fall as much as 60 per cent on Monday in the wake of the announcement, said its flagship Inmaculada mine and another one in the Ayacucho region of Peru would continue to operate under current frameworks.

The Inmaculada mine is Hochschild biggest and represented 60 per cent of its cash flow at the time of its 2020 annual report, while both mines represent the bulk of the company’s production.

The Inmaculada mine in Peru is Hochschild biggest, representing a significant portion of its cash flow

Peru’s Prime Minister Mirtha Vasquez said late on 19 November that the Government would shut down several mines in the south western Ayacucho region ‘as soon as possible’.

With mining an essential part of the economy of Peru, which is the world’s second largest producer of copper and silver, the decision set up a clash with mining executives with operations in the country.

FTSE 250-listed Hochschild vowed to fight the ‘illegal’ plans, adding that it had never been formally contacted by the authorities.

But on Wednesday night Peru’s government watered down its proposals and said mining companies could seek permission to extend operations.

Ignacio Bustamante, Hochschild chief executive, said: ‘We are pleased that our Inmaculada and Pallancata mines can continue to operate without further uncertainty and, furthermore, we reaffirm our goal to increasing our resources and extending our mine lives, in accordance with current legislation.’

Hochschild shares were up 18 per cent in late morning trading to 143.90p, remaining around 15 per cent off the level prior to when the Peruvian government’s plans were revealed. 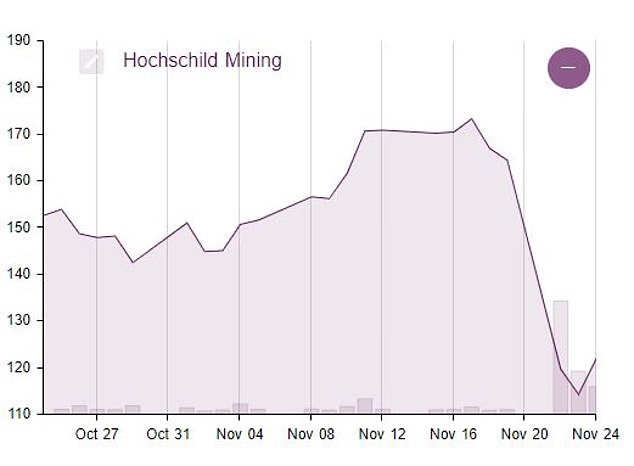