Home and Away Jessica Clarke strips down with Scott Lee

He’s been embroiled in on-screen heartache while playing the role of Hunter King on Home and Away.

But it appears Scott Lee’s lovelorn character could be set for a fiery new romance after photos emerged of him acting opposite Summer Bay newcomer Jessica Clarke on Tuesday.

Taken on the Palm Beach set, the pair put on a flirty display in the behind-the-scenes  snaps.

New love in Summer Bay? On Tuesday, photos emerged of Scott Lee, who plays the role of Hunter King, alongside the show’s newcomer Jessica Clarke on Sydney’s Palm Beach set

Having recently broken up with on-screen, long-term girlfriend Olivia (played by Raechelle Bannon) after learning she had cheated on him, the timing seems fitting for a new romance to bloom in Summer Bay.

While mystery co-star Jessica is yet to make her debut on the show, Scott was seen splashing about and getting cosy with the busty blonde.

Wearing a floral two-piece bikini, Jessica was seen stripping down after a sweaty workout with Scott. 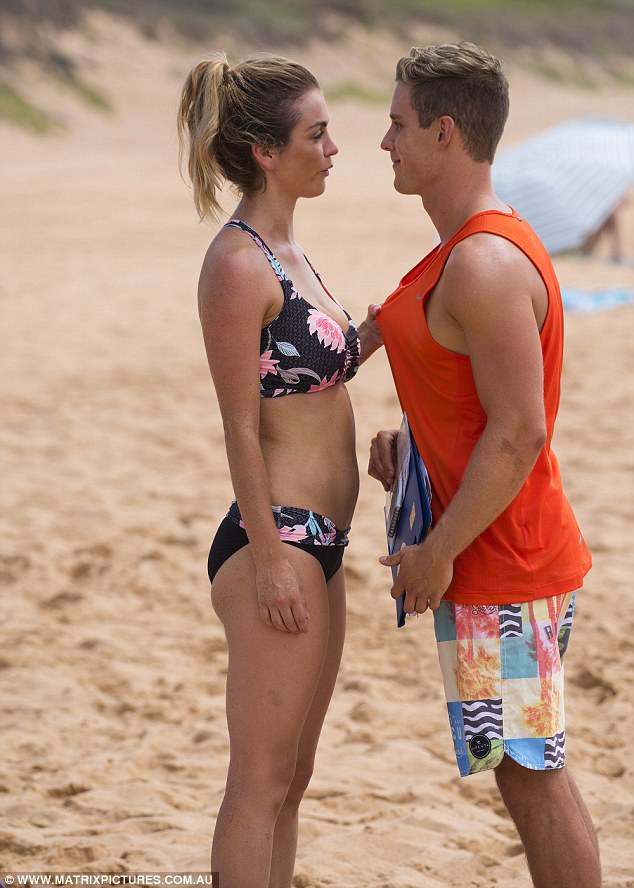 Sweaty moments! Putting on a flirty display, the behind-the-scenes snaps may be pointing toward a new raunchy relationship set to bloom and shake things up in Summer Bay 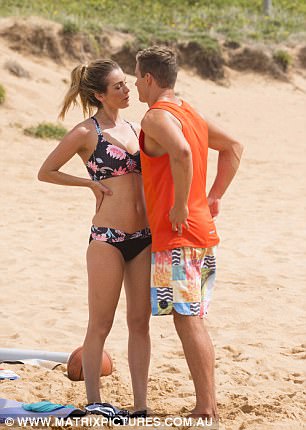 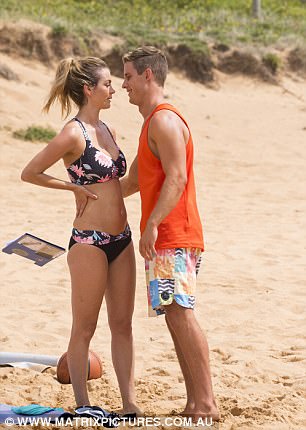 Take it off!  Jessica appears to be gearing up for a raunchy relationship with Scott in Summer Bay 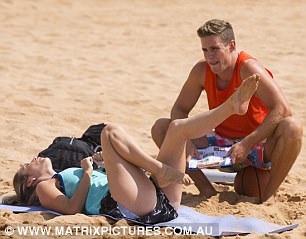 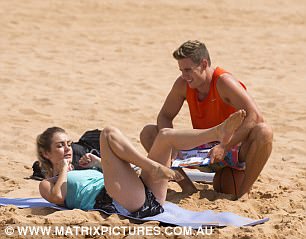 Work it! The beauty powered her way through a series of exercises 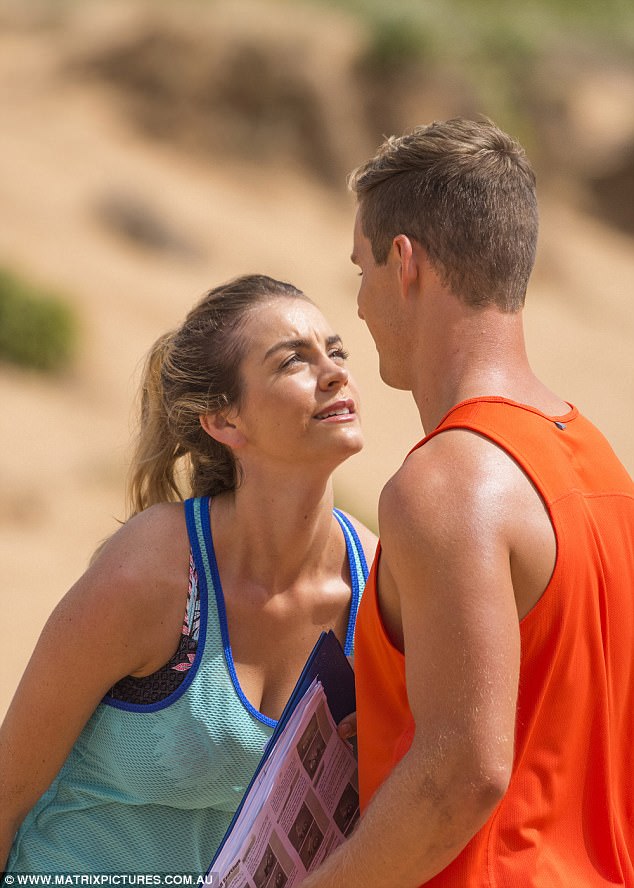 Intense scene? The pair seemed to be having an intense moment on the set, with Jessica glaring at Scott, who could be her potential beau on the series

Watching her strip down from a sporty turquoise top and black shorts, Scott was captured getting close with Jessica before taking his singlet off.

At one point, the possible on-screen couple seemed in an intense argument, with Jessica spotted storming off.

Meanwhile, hunky Scott appeared to be still interested in her on-screen character, following her. 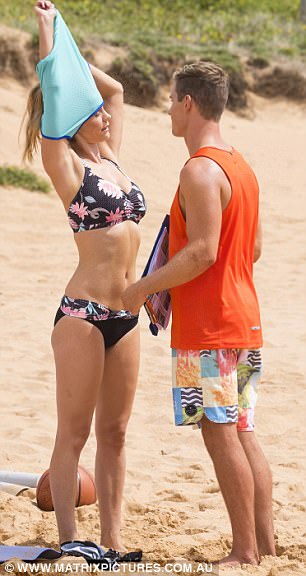 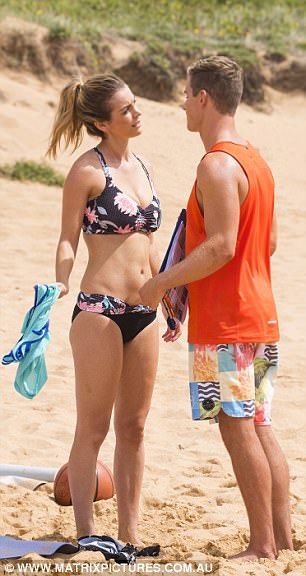 Love triangle? Actress Jessica proved she was ready for Summer Bay, flaunting her slender waist in a black floral bikini 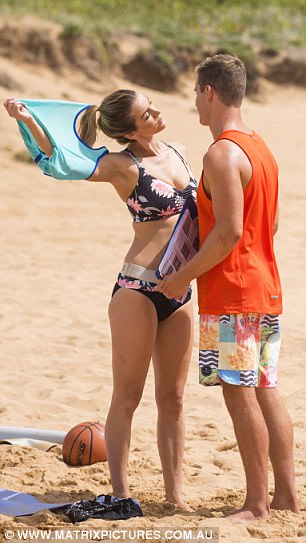 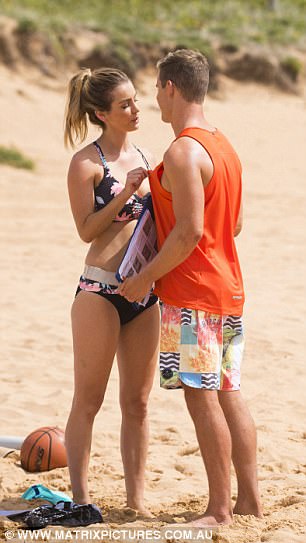 New romance? Scott appeared to be very taken with his newest leading lady, who flaunted her enviable bikini body in her first scenes after taking residence in Summer Bay 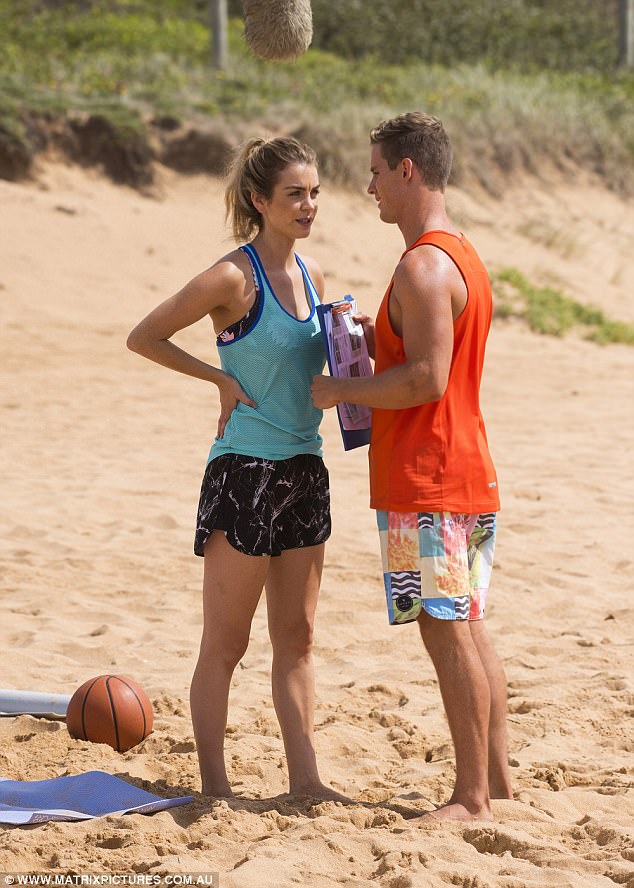 New chance at love? After watching Scott play lovelorn Hunter on the show, fans could see the hunky actor involved with Jessica’s character, who is yet to debut in Summer Bay

Images of Scott’s character striking up a new romance comes as his former on-screen love Olivia is thought to be leaving the bay.

On Tuesday,Raechelle was rumoured to be filming her final scenes of the soap with Lynne McGranger, who plays Irene Roberts.

Shaking things up! Newcomer Jessica looks set to have quite the entrance in Summer Bay if her first scenes are anything to go by 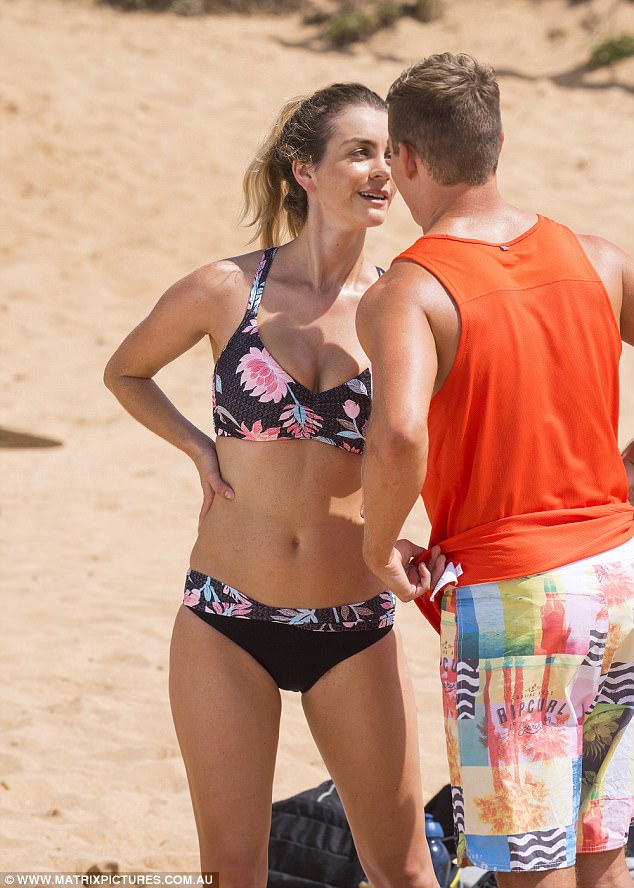 Tough girl? Jessica certainly appeared to be able to hold her own in the scene opposite Scott, who plays Hunter King on the series 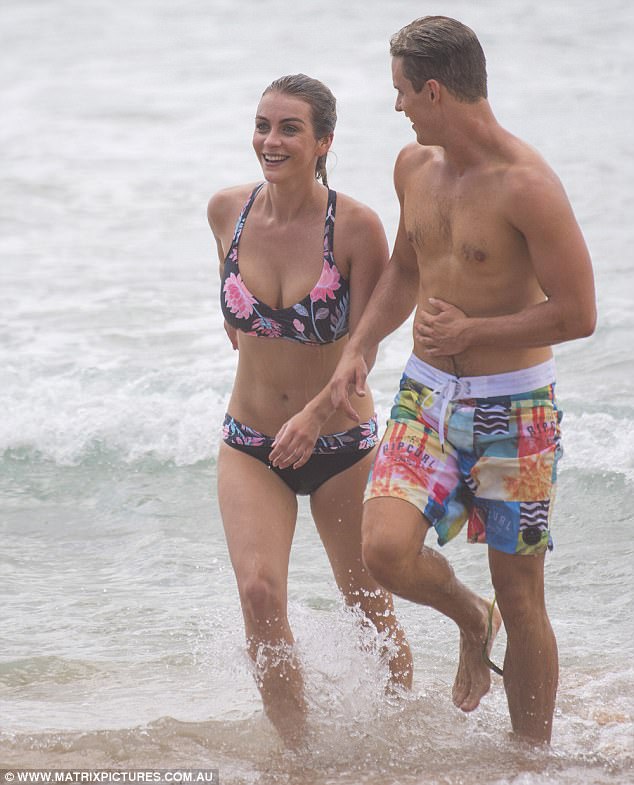 Kiss and make up? The pair were spotted getting out of the surf a lot more relaxed after their intense fight scene 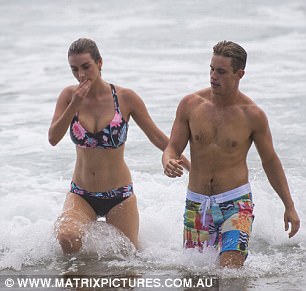 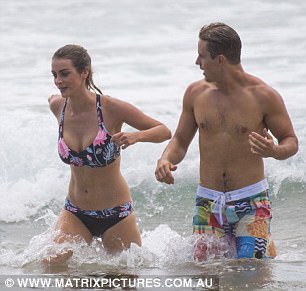 Flirty or friends?  Jessica and Scott splash about in the water while filming episodes for Home and Away

Daily Mail Australia has reached out to Home And Away and Raechelle’s management for comment.

Aside from wrapping up her scenes on the long running soap, Raechelle will star in a short film called Phenomena alongside her twin sister Karina Banno. 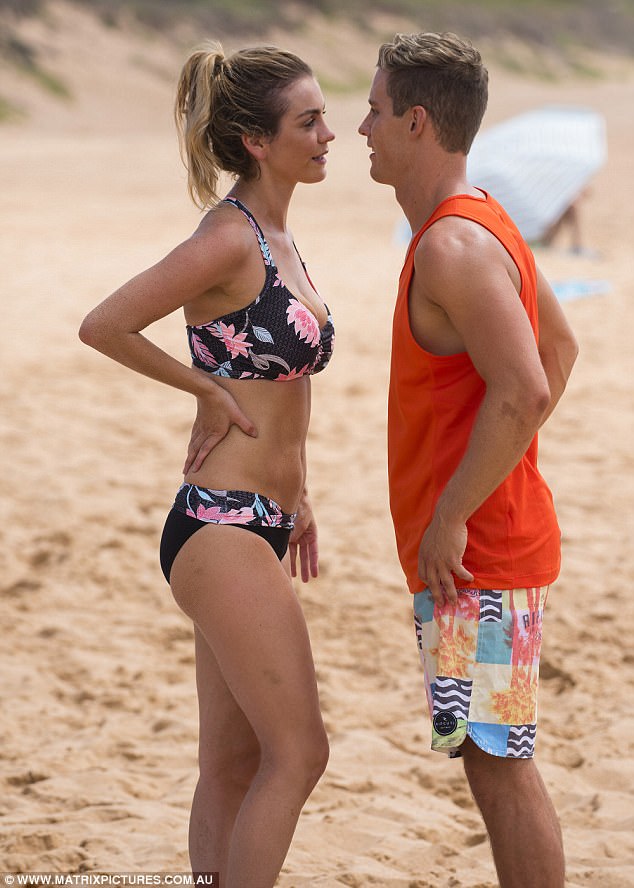 Love match? The arrival of Jessica comes after Scott’s character Hunter King was cheated on by his on-screen girlfriend 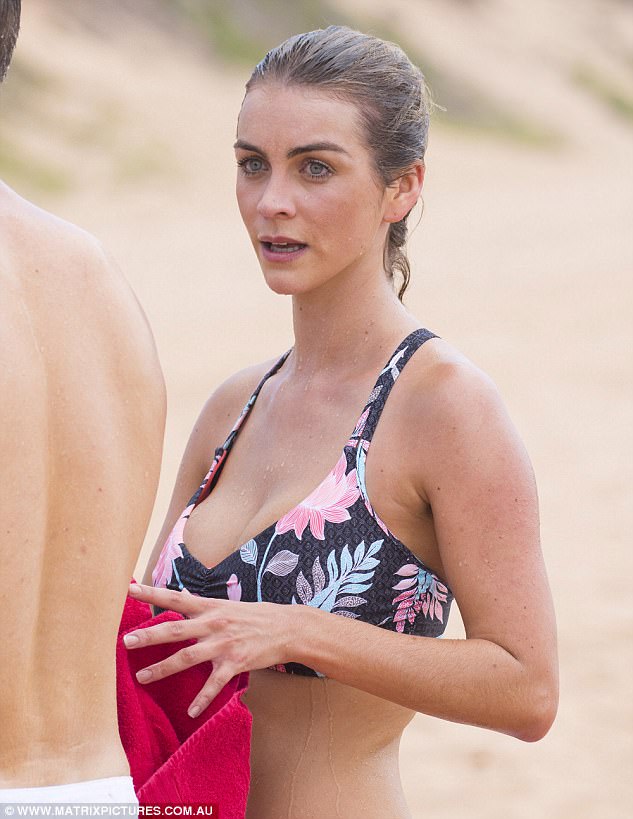 Big changes? Summer Bay could be set for quite a shake-up if the new scenes involving Jessica are anything to go by with the beauty appearing confident on the set 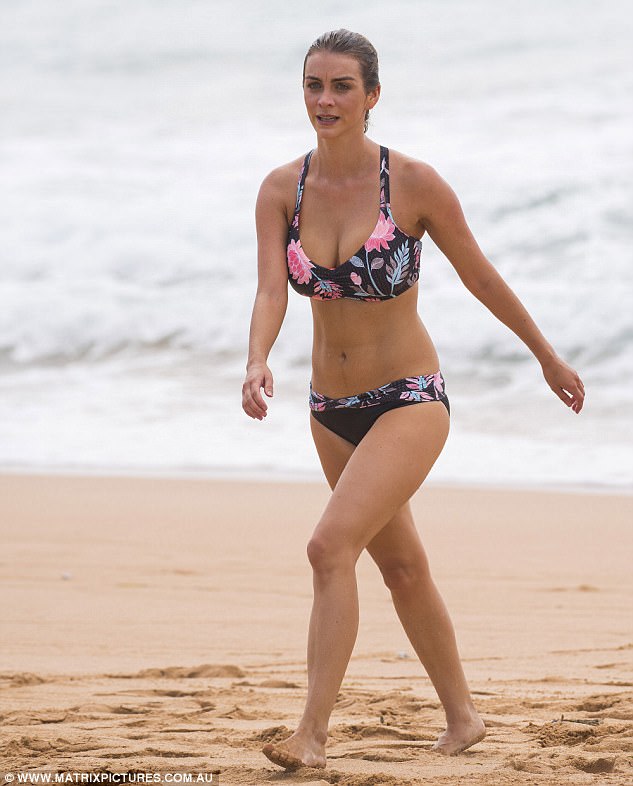 New girl in town? While there’s no confirmation Jessica and Scott are set to become Summer Bay’s hottest fling, Scott wasn’t shy when wrapping his arms around the beauty’s waist on set