Amateur chefs are following an incredibly simple recipe to make gourmet lasagne in a slow cooker.

The recipe, which comes from Kraft Heinz, the world’s fifth largest food producer, requires 450 grams of lean beef mince, a jar of tomato sauce, one egg, six sheets of pasta and lashings of mozzarella, Parmesan and ricotta cheese.

Australians have been sharing photos and videos of their dishes in cookery groups on Facebook over the past few weeks, with many hailing it ‘the best lasagne’ they have ever made.

‘Just pass the garlic bread and leave me to it. Looks amazing,’ one woman said under a video of lasagne bubbling away in a slow cooker.

A restaurant-standard lasagne made by an Australian amateur chef, using a simple recipe from US food producer Kraft Heinz which requires four ingredients and three types of cheese

Slow cookers are available from a range of Australian retailers, with five litre pots for $19 at Kmart and a 3.5 litre Russell and Hobbs machine for $35 from The Good Guys online.

To make the lasagne, brown the mince in a large skillet, draining excess water and juice through a colander after it’s cooked.

Once drained, return the meat to the pan and stir in the tomato and basil sauce and a cup of water to loosen the mixture.

Everything you need to make slow-cooked lasagne

One jar of tomato and basil sauce

One tub of ricotta

One bag of shredded mozzarella

In a bowl, combine the egg, a tub of ricotta, one cup of mozzarella and two tablespoons of Parmesan, adding a handful of chopped parsley once the mixture has combined.

Set a small pile of Parmesan and mozzarella aside for later.

Spoon one cup of the meat and pasta sauce into your slow cooker, which should be sprayed generously with oil to prevent food from sticking. 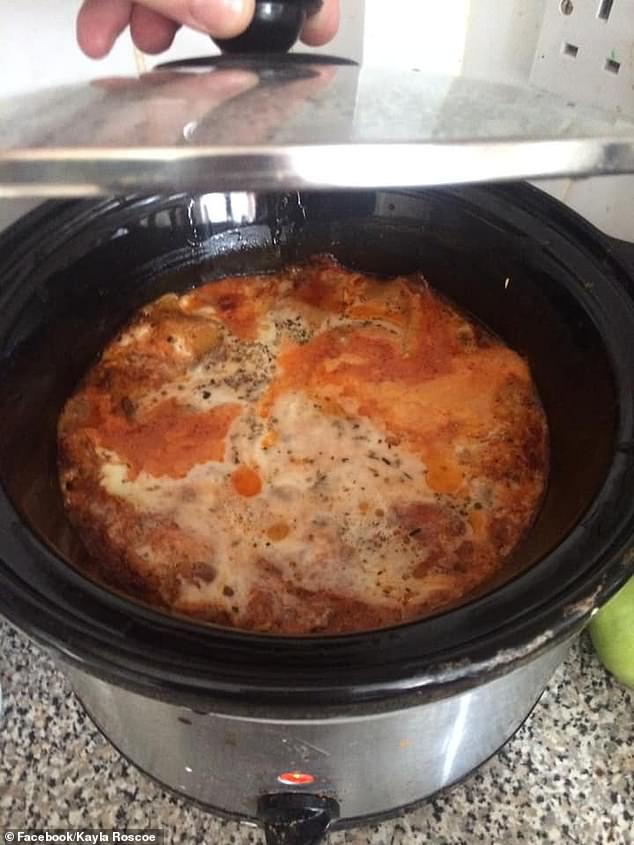 A lasagne three hours into cooking, with cheese still to melt across some parts of the top

Cover with a sheet of pasta, followed by the blend of cheese, and repeat until you’ve built three thick layers.

Leave the lasagne to cook on a low heat for four to six hours, depending on your cooker settings, or until all the liquid has absorbed into the dish.

Sprinkle the remaining cheese over the top and leave it to stand for 10 minutes until melted and golden brown.