A cash-strapped military veteran has revealed how he makes some $300 per week by rummaging through Mark Zuckerberg’s garbage.

A piece published by the New York Times on Sunday gives a glimpse into the life of Jake Orta, a full-time trash picker slash ‘treasure hunter’ in San Francisco.

The 56-year-old’s small, government-subsidized studio apartment is filled with odds and ends found in the garbage at Zuckerberg’s $10million mansion just three blocks away – including a vacuum cleaner, hair dryer, coffee machine and a sack of the Facebook CEO’s discarded clothes.

‘It just amazes me what people throw away,’ Orta told the Times one night whilst picking through the bins outside Zuckerberg’s home.

‘You never know what you will find,’ he said as he pulled out a pair of gently-used designer jeans, a brand new cotton jacket, grey Nike sneakers and a functioning bicycle pump.

Orta is part of an underground economy in which people make their living by rummaging through the garbage outside multimillion dollar homes in San Francisco, a city whose wealth disparity is well summed up by the fact that someone like Orta would be living so close to someone like Zuckerberg.

While trash picking is illegal in California, the law is rarely enforced.

Jake Orta, 56, is seen digging through a trash can outside of Mark Zuckerberg’s home in San Francisco last Wednesday. The military veteran makes some $300 per week by recovering items that have been thrown out by the Facebook CEO and his wealthy neighbors 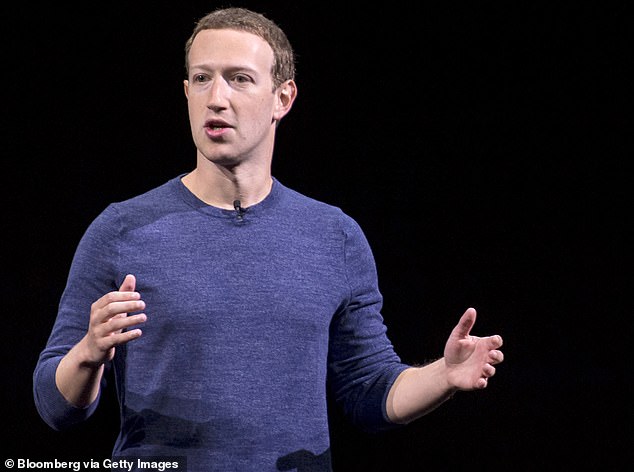 Orta lives in a small studio about three blocks from Zuckerberg’s $10million mansion in the Mission neighborhood of San Francisco. The billionaire is pictured last fall

Orta was born in San Antonio, Texas, and was in the Air Force for more than 12 years, having served during the Persian Gulf war of 1991 and been dispatched to Germany, Korea and Saudi Arabia.

Upon his return to the US, Orta struggled with alcoholism and fell into homelessness after his wife left him.

He moved to San Francisco, where five years ago he qualified for a program assisting homeless veterans and was able to get an apartment in the Mission neighborhood, where the average home is valued at upwards of $3million.

Orta now takes advantage of his affluent neighbors by proving the old adage that one person’s trash is another’s treasure.

A Times reporter joined him on six late-night trash picking jobs to see why his friends have dubbed him ‘The Finder’.

Orta has several routes he takes when searching for items that can be resold, though there are a few stops he’s come to rely on for the best finds.

He said the first rule of skip scavenging is to make sure there’s not a raccoon or possum present in the bin before you dive in.

At one home in March, Orta came across a box of silver goblets, dishes and plates, ‘as if someone had yanked a tablecloth from underneath a feast in some European chateau’, the Times reported.

Other recent finds included cellphones, iPads, three wristwatches and bags of marijuana – which he admitted to smoking himself instead of selling.

During one of his latest trips around Zuckerberg’s neighborhood, Orta didn’t come across anything worth bringing home with him in the two bins outside the billionaire’s home.

‘Just junk — nothing in there,’ Orta said after sifting through a blue recycling bin with A&W diet root beer cans, cardboard boxes and a junk mail credit card offer and a black landfill bin with leftovers from a chicken dinner, a stale baguette and Chinese takeout containers. 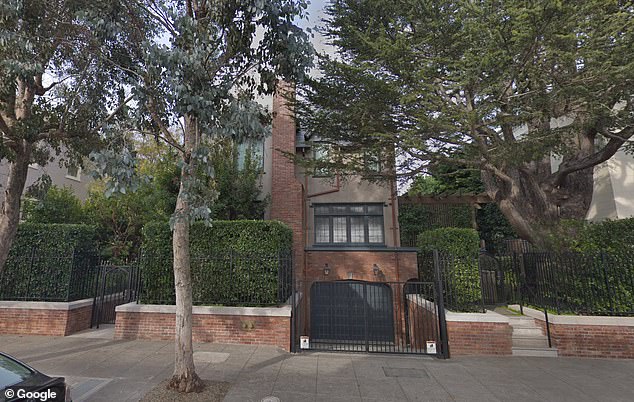 Zuckerberg’s $10million home on Liberty Hill in San Francisco is seen above. During one of his most recent trips to Zuckerberg’s home, Orta didn’t come across anything worth reselling 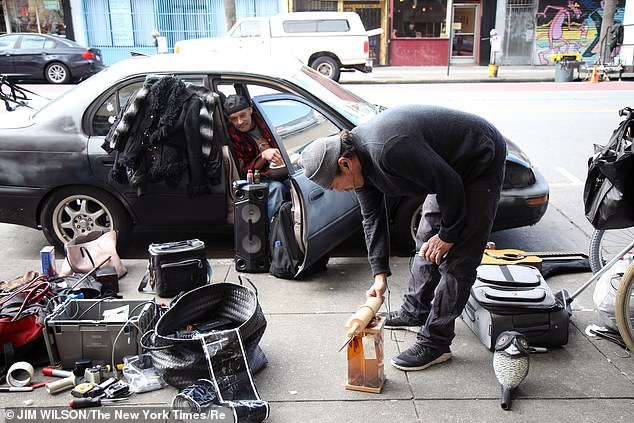 Orta, known to friends as ‘The Finder’, is seen above setting out his wares for an impromptu sidewalk sale on January 25. He aims to bring in between $30 and $40 per day, or $300 per week, from the items he recovers from the trash 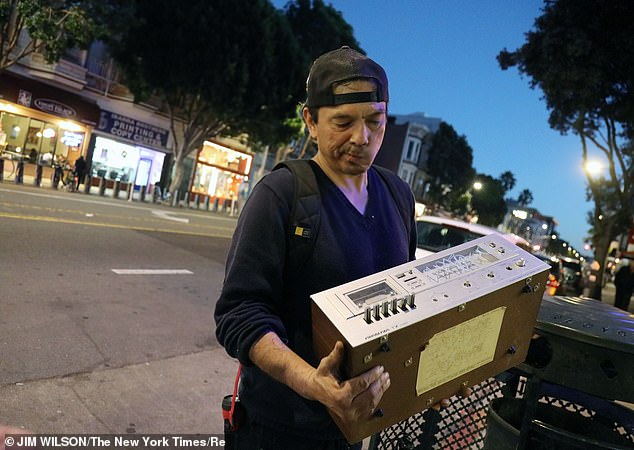 Orta typically sells recovered items at impromptu markets on Mission Street or at a more formal market on Saturdays on Julian Avenue.

He said he never has much luck selling children’s toys because parents don’t like the idea that they have come from the trash.

Women’s clothing is also difficult to sell, whereas men are easier customers because they don’t seem to care as much about where their clothing comes from and will pay $5 or $10 for a pair of jeans.

Orta said one of his favorite discoveries was a collection of newspapers from around the world documenting the course of World War II.

He’s refused to sell that collection and wonders why the original owner threw it out.

Orta says he exclusively takes trash that has clearly been thrown out by its original owner.

He and his fellow trash pickers target bin containing trash that would otherwise make its way to what’s known as ‘the pit’ — a hole in the ground on the outskirts of the city where non-recyclable trash is crushed and compacted by a huge bulldozer before being carried to a dump an hour and a half away.

Nick Marzano, an Australian photographer whose magazine Mission Gold documents the world of trash pickers in San Francisco, estimates there are several hundred ‘entrepreneurs’ like Orta in the city.

‘It’s a civic service as I see it,’ Marzano told the Times. ‘Rather than this stuff going to landfill the items are being reused.’

‘It’s the primary form of income for people who have no other income,’ he added.