A Hong Kong pop star and protest organiser today urged the U.S. Congress to take action against China over its crackdown on the months-long protests in the city.

Cantopop star Denise Ho, whose music has been banned in mainland China because of her activism, made a ‘plea for universal human rights’ today in an appearance likely to infuriate Beijing.

‘This is not a plea for so-called foreign interference. This is a plea for democracy,’ she told a congressional commission in Washington.

The movement began as a protest against an extradition law but have mushroomed into a months-long rebellion amid fears of creeping Chinese influence in Hong Kong, which is meant to enjoy a special status.

Protesters want the U.S. to impose sanctions on Chinese officials and stop the sale of American police equipment that could be used to quell the demonstrations.

There are also proposals to end Hong Kong’s special trading status with the United States unless the State Department certifies that the city’s authorities are respecting human rights and rule of law. 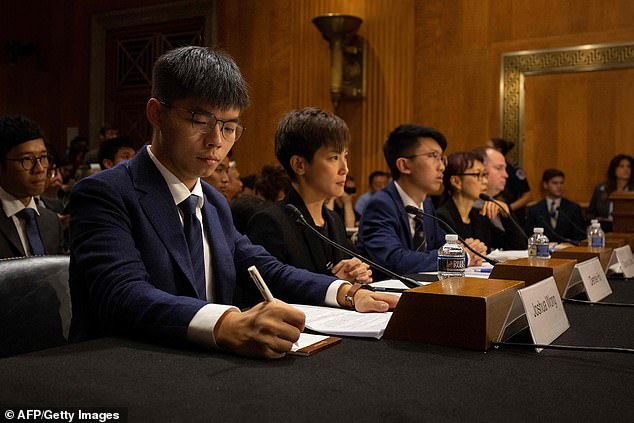 Joshua Wong (left), one of the most prominent figures in the protest movement, joins Denise Ho (second left) in giving evidence to American lawmakers today

Ho said China’s clampdown in Hong Kong marked a test for all who believe in a world that is ‘free, open and civil.’

‘If Hong Kong falls, it would easily become the springboard for the totalitarian regime of China to push its rules and priorities overseas, utilizing its economic powers to conform others to their communist values,’ she said.

Millions have taken to the streets of Hong Kong, initially against a now-dropped bid by its leaders to allow extraditions to the mainland.

The movement has expanded into a broader pro-democracy movement in the semi-autonomous financial hub where activists say freedom has been eroding.

Joshua Wong, one of the most prominent figures in a generally leaderless movement, told lawmakers that ‘the stakes have never been higher’.

‘Beijing shouldn’t have it both ways, reaping all the economic benefits of Hong Kong’s standing in the world while eradicating our sociopolitical identity,’ the 22-year-old said.

He warned that Chinese President Xi Jinping may take harsher action before next month’s 70th anniversary of Communist China.

‘Sending in the tanks remains irrational, though not impossible,’ Wong said. 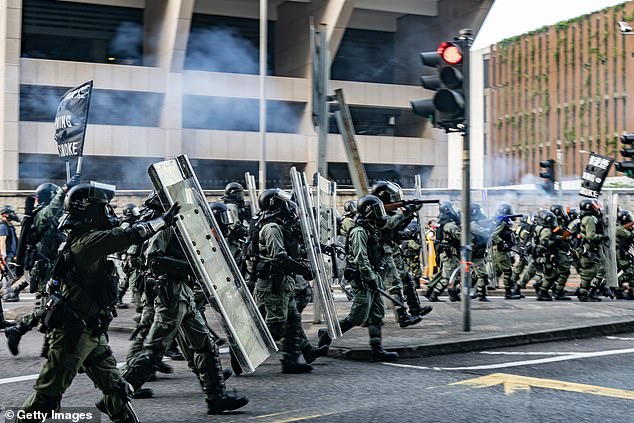 He also said that Carrie Lam, Hong Kong’s pro-Beijing chief executive, could take draconian measures that include shutting down the internet or the public transportation system.

Wong warned that a baby born today would be 28 in 2047 – the date when China’s promise with former colonial ruler Britain to allow ‘one country, two systems’ expires.

‘That deadline is closer to us than it appears; there’s no return,’ Wong said.

‘I hope that historians will celebrate the United States Congress for having stood on the side of Hong Kongers, the side of human rights and democracy,’ he said.

Hong Kong protesters have rallied outside the U.S. consulate in a bid to gain international support.

President Donald Trump’s administration, however, has taken a low profile, with some analysts saying that a vocal U.S. stance could feed Beijing’s attempts to brand the protesters as foreign agitators. 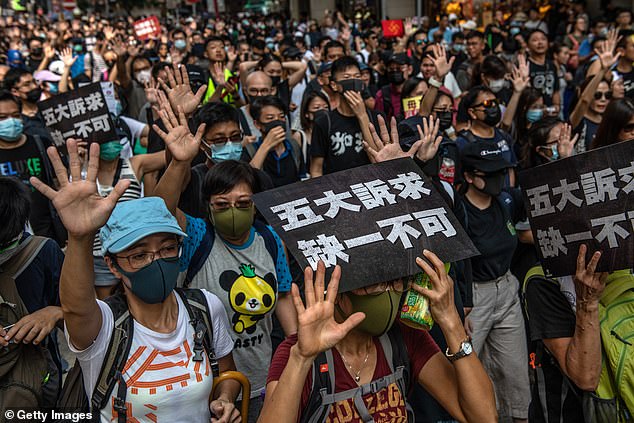 Beijing and Lam have already accused the United States of interference and China summoned Germany’s ambassador after Wong visited the European power.

The Hong Kong Human Rights and Democracy Act, which enjoys wide support in Congress, would also open the way for sanctions on anyone involved in eroding Hong Kong’s status.

A related bill under consideration would ban the sale of tear gas, rubber bullets and other crowd control equipment to the Hong Kong police after concerns that Western imports abetted their crackdown.

Senator Marco Rubio, a Republican ally of Trump, hailed the Hong Kong protests as ‘one of the greatest people-power movements we have witnessed in recent enemy.’

‘It is my belief that it’s long overdue for the United States and the free world to respond,’ said Rubio, co-chairman of the Congressional-Executive Commission on China which held the hearing.

Representative Jim McGovern, a liberal Democrat who also heads the commission, said that the protesters have ‘inspired the world.’

‘Thank you for your courage and bravery. We stand in solidarity with you,’ he told them.