NHS doctors have spent more than £3million extracting items out of rectums over the past decade, experts say.

Scientists analysed NHS records to determine how many ‘manual removal of foreign body from rectum’ procedures were conducted in NHS hospitals between 2010 and 2019.

They found doctors have had to remove 3,500 objects.

And the team claimed the trend — costing the NHS roughly £340,000 a year — is becoming more of a problem.

Critics today argued taxpayers would be ‘uncomfortable’ with the soaring number, and cost, of the accidents.

Nearly twice as many foreign objects (518) were removed in the final year of the study compared to 2010/11.

People most commonly shove objects into their rectum for sexual pleasure.

This is partly to do with the number of nerves in the anus making it highly sensitive, and for men can simulate the prostate, an erogenous part of the male reproductive system.

For women it can also indirectly stimulate parts of the vagina.

The report, by doctors from the Royal Wolverhampton Hospitals NHS Trust, did not name what objects Brits had used.

But over the years MailOnline has reported on people using toothbrushes, aerosol cans, toy figurines, and eggs in their pursuit of sexual pleasure. 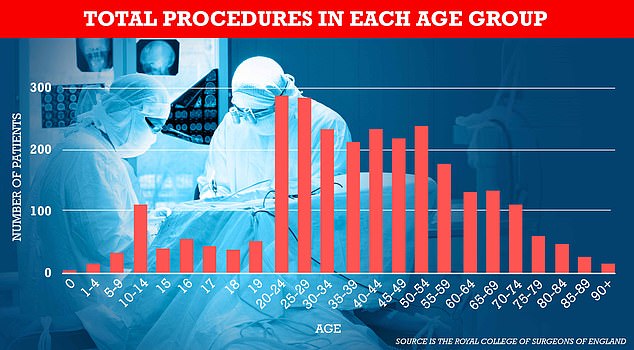 This price tag incorporates the costs of performing the procedure, including such factors as anaesthetic drugs, the time of health staff and the hospital stay.

Men made up the vast majority of incidents, accounting for 85 per cent of the cases.

And the over 60s accounted for about one-in-six of the total cases according to the report published in the Royal College of Surgeons of England Annals.

Most of the foreign objects were able to be removed with the use of anaesthesia in about 24 hours, with only a small number of patients requiring hospital stays longer than a day.

They also note their figures may be an underestimation as they do not include data from private hospitals.

‘But taxpayers will be more than uncomfortable with the rising cost for these surgeries.’

A RCS spokesperson said: ‘The intended audience of the Annals is surgeons, and the purpose of this article is to inform surgeons about one of the rarer operations that they may have to undertake in the course of their work.’

As well as getting stuck objects, they can also potentially perforate the bowel which can be deadly as material from the digestive tract can spill into other parts of the body, causing an infection.