House is swept away in raging New Hampshire floodwaters

An entire house has been swept away by raging floodwaters in New Hampshire as a ferocious storm battered parts of the north-east.

Footage shot by a resident captured the unbelievable moment the house started floating down the Baker River in the small town of Warren on Monday.

Moments later, the one-story house was filmed crashing into a bridge and smashing into pieces.

Footage shot by a resident captured the unbelievable moment the one-story house started floating down the Baker River in the small town of Warren, New Hampshire on Monday

‘This is so sad,’ Tom Babbit, who shared the video on Facebook, wrote.

No one was in the house at the time and it isn’t yet clear who the homeowners are.

The fierce storm left nearly 1.5 million homes and business across the region in the dark at the peak on Monday. More than 800,000 customers remained without power Tuesday morning.

While the house was swept away in New Hampshire, sailboats also crashed onto a beach in Massachusetts and an empty scaffolding truck was blown off a bridge.

Thousands of trees were also toppled. 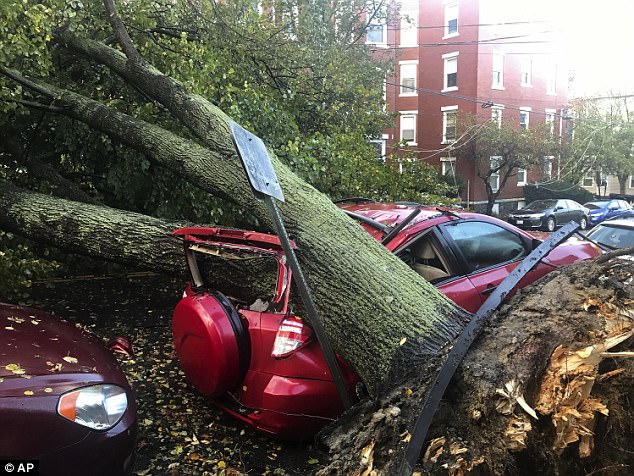 The fierce storm across the north-east toppled thousands of trees on Monday. Pictured above is the aftermath in Portland, Maine 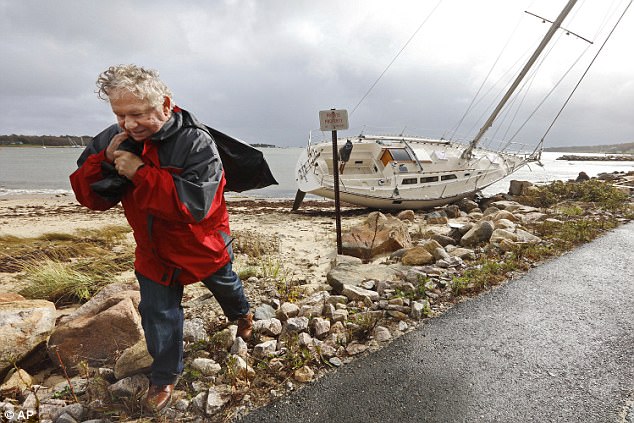 Jack Durant, owner of the sailboat Lionheart, carries a bag with valuables he removed from his sailboat after it washed up on shore on Monday in Massachusetts

In Maine on Tuesday, fallen trees were tangled in power lines, while trees, limbs and leaves littered roads. Fences, vehicles and houses were also smashed by falling trees and limbs.

The storm packed winds gusting to 82 mph on Cape Cod, Massachusetts, 78 mph in New Hampshire, and 69 mph in Portland, Maine.

Some cities and towns in Maine, New Hampshire, Massachusetts and Connecticut postponed trick-or-treating from Halloween night – Tuesday – to as late as Sunday evening due to concerns about pitch-black streets, downed power lines and debris.

The weather this week is seasonable – high temperatures in the 50s and 60s and cooler overnight, though the low Wednesday morning was predicted to approach freezing. 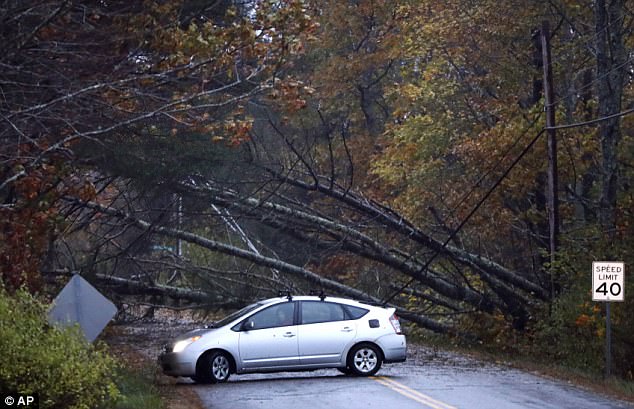 Severe weather pounded the Northeast early Monday. Pictured above is a motorist turning around after finding downed trees blocking her path in Maine