How to make PODS with a slow cooker

How to make PODS at home: Foodie wows with her simple homemade recipe for the caramel treat – and it will cost you just $5 to make

An amateur chef has conjured up a recipe for homemade Mars flavoured Pods and you’ll only need your slow cooker and a little bit of patience to piece them together.

The Australian woman shared her creation on social media with photos of a delicious – and incredibly similar – Pod to the original, and explained exactly how she did it.

‘To make the caramel I put one can of Nestle’s sweetened condensed milk in my slow cooker, pull the ring side down, fill the cooker with water so the can is about an inch underwater and leave on high for six hours,’ she said.

‘You can also put the can on baking paper before filling with water to save it marking the bottom of the slow cooker.’

After your caramel has been sitting in the cooker for six hours turn it off and let the tin cool in the water overnight.

The following morning warm Arnott’s butternut snap biscuits in the oven until they are soft, push a spoon in the middle of each biscuit to curve them and then let the biscuits cool.

How much do they cost to make?

‘Fill the cooled biscuits with caramel and then melt 150 grams of Nestle’s milk chocolate buttons in the slow cooker on high for 10 to 15 minutes, just until melted and smooth and spread on top of each caramel filled biscuit,’ she said.

‘Then put in the fridge to set. The caramel is so yummy I had to resist eating it out of the tin with a spoon.’

Hundreds of people rushed to comment on the post, saying this would be the perfect treat for their family. 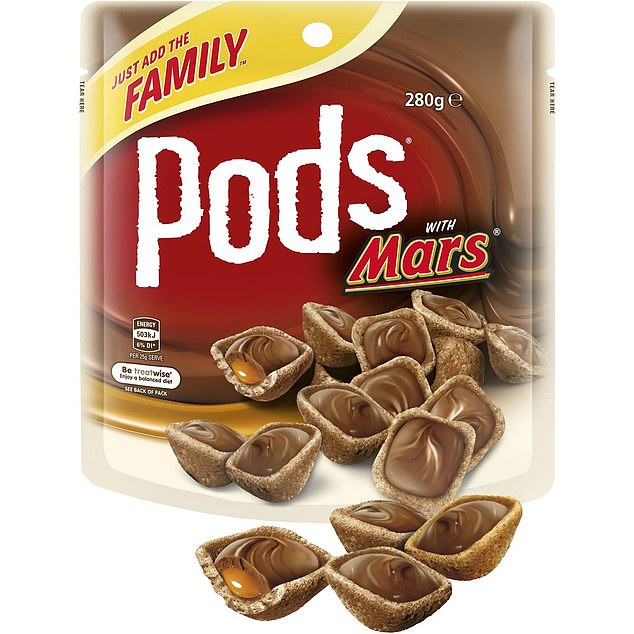 ‘I did exactly this for some desserts at Christmas but with Toblerone instead of buttons. They were a huge hit,’ one woman said.

‘And boom! Just like that, healthy promises to myself just left the building,’ said another.

A third added: ‘Wow these look divine. I’ll have to try this.’

A man chimed into the conversation to say he just purchases caramel sauce that’s already made to avoid waiting six hours.

But people argued that it doesn’t have the same sweet flavour.

The original Pods contain Mars Bar filling with a milk chocolate topping and biscuit underneath.