How zoologist Chris Humfrey lives with 2000 Australian animals – like crocodiles, dingoes and snakes

An Australian man has described the joy – and the mayhem – of living with over 2000 animals, many of which could kill him, his girlfriend and his children with a single bite.

Chris Humfrey, a zoologist and educator, shares his property in Victoria’s Macedon Ranges, an hour from Melbourne, with 18 crocodiles, 200 snakes (many of them deadly), a pack of dingoes, plus lethal funnel web spiders and scorpions.

At any one time hundreds of the animals can be inside the house, which is also home to his two teenage girls, Tasha, 16, and Charlie, 18, and his partner Erin, a fellow zoologist.

An Australian man has described the mayhem and joy of living with over 2000 animals – some of which would tear him, his girlfriend and his children limb from limb given the chance (Pictured, Mr Humfrey’s now teen daughters Tasha and Charlie when they were younger) 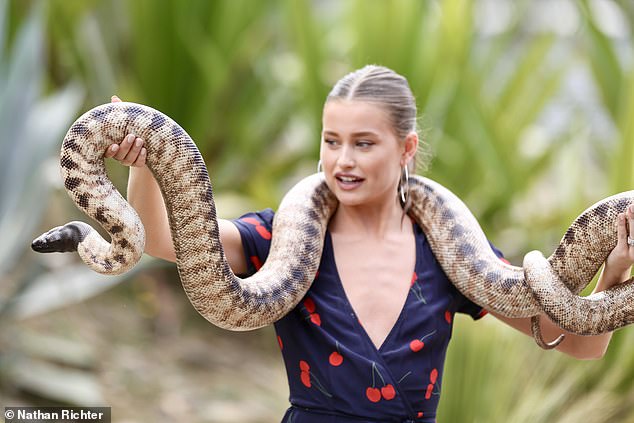 Chris Humfrey, a zoologist and educator, shares his Victorian property with crocodiles, 200 snakes, a pack of dingoes, lethal funnel web spiders and scorpions and hundreds of other species (Pictured model Lexi Wood with a python at Humfrey’s wild action zoo) 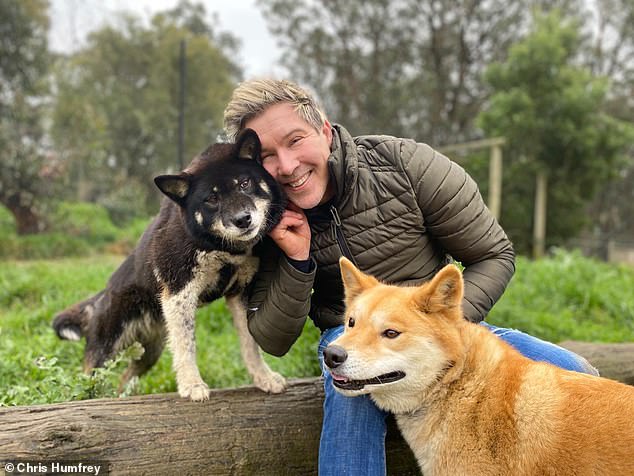 Animals are family to Mr Humfrey, who describes his home as part animal hospital, part hotel and part classroom (Pictured, Mr Humfrey with two of his four dingoes, which he says act as his ‘security system’)

The family puts up with polished concrete floors instead of carpets at their wild action zoo home – aka ZooHQ – to minimise the smell and allowing easy hosing away of the daily mess.

‘Sometimes there’s a smell, but we’ve all got smelly family members, haven’t we?’

The family’s only security system is, he jokes, the four dingoes that let him know when something’s amiss. 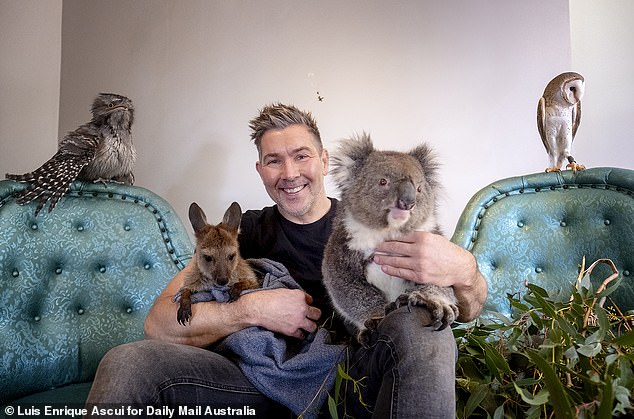 ‘When you raise animals you realise they’re no different from us – they want security, a cuddle, a good feed, they like to engage with us,’ Mr Humfrey says 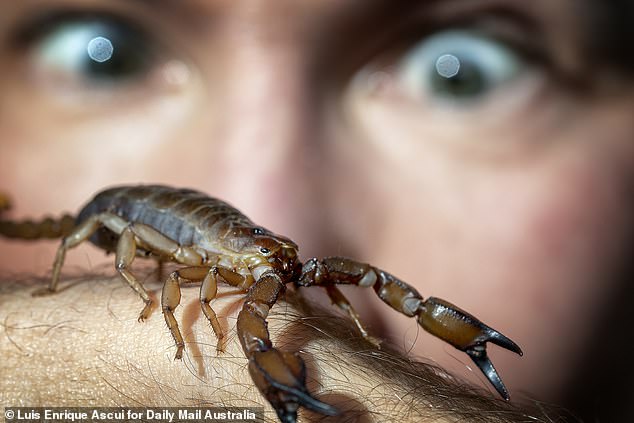 He follows thousands of strict occupational health and safety procedures, including labeling – and counting the deadly bugs

Among the other species the family keeps are penguins, koalas, Tasmanian Devils, possums, frogs, turtles, owls tiger quolls and peregrine falcons – the fastest of animal on earth, capable of swooping on prey at 320km/hr.

The falcon is only a danger to other smaller birds or rodents – which are curiously the most frightening of his animals.

‘I’m scared of rats and mice. If i see them I s*** my pants, I literally jump on a chair,’ Mr Humfrey said. 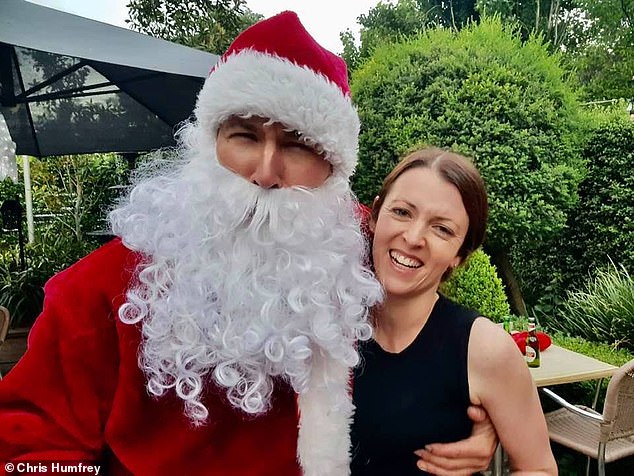 Mr Humfrey and his partner Erin, also a zoologist, manage their 11 acre property in the Macedon Ranges 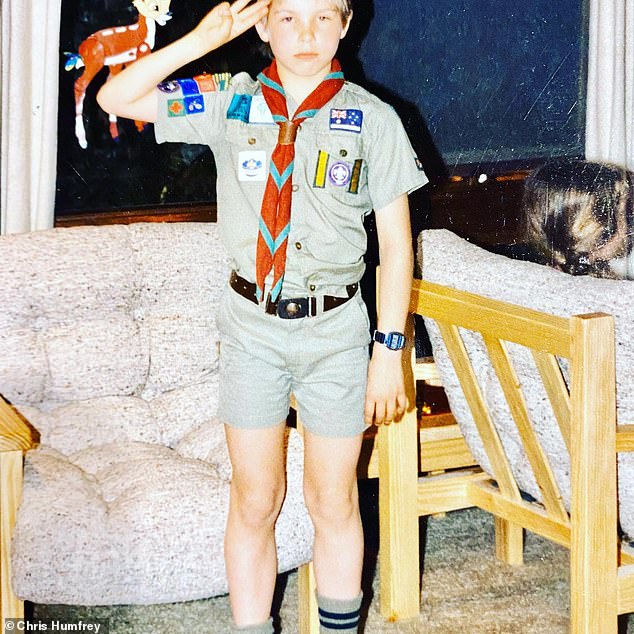 The oldest animal he has is a frog he rescued from a urinal in Coffs Harbour when he was three – 45 years ago. The frog, which he calls Freddo, is now 45 and ‘my best friend’

‘I understand people have a fear of crocs and snakes, my irrational fear is of small furry things that race along the ground, I’m very careful where I stand at night.

‘I can catch a Taipan (the world’s deadliest snake), but I run in the other direction from rats. That’ why I’ve got 200 pet snakes, they eat rats and mice.’

His snakes include pythons, and venomous snakes such as death adders and copperheads, but no browns at present – although he has in the past.

Fear has never stopped him. He lives by the motto ‘if you’re not scared once a day you’re not living’.

The many animals on his property that are capable of killing a human he generally finds ‘beautiful’ or ‘amazing’.

But their interest in eating his or anyone’s human family – or the family’s one regular pet, a Dalmatian – requires constant vigilance. 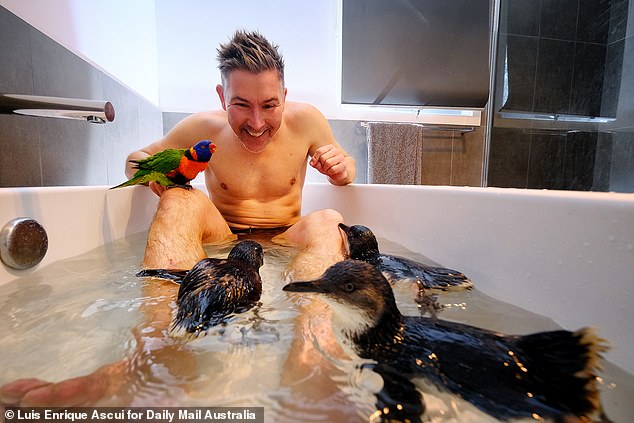 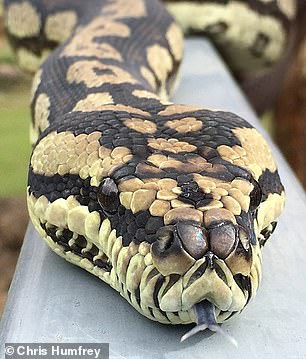 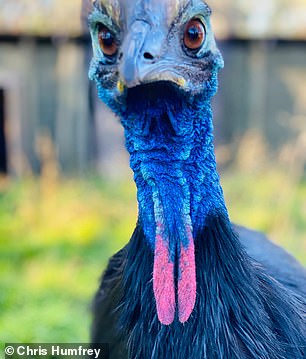 Mr Humfrey has 200 snakes at his home, including huge pythons. He also has four cassowaries, considered the world’s most dangerous bird. One is so villainous the family named it ‘psycho’ and keeps out of its way

So why does he put himself – and his family – at such danger?

Mr Humfreys hopes his home can bring people closer to animals and thereby realise their value and encourage them to protect animal habitats.

While he is a passionate environmentalist, he isn’t a fan of extreme groups such as Climate Rebellion. ‘You can’t interfere with people’s normal lives, they won’t listen.’

He prefers to encourage change by making people care about animals.

One change he is desperate to see is for domestic cats to be kept inside.

‘Not many people understand that 70 million native animals are killed every night by cats – feral and domestic. 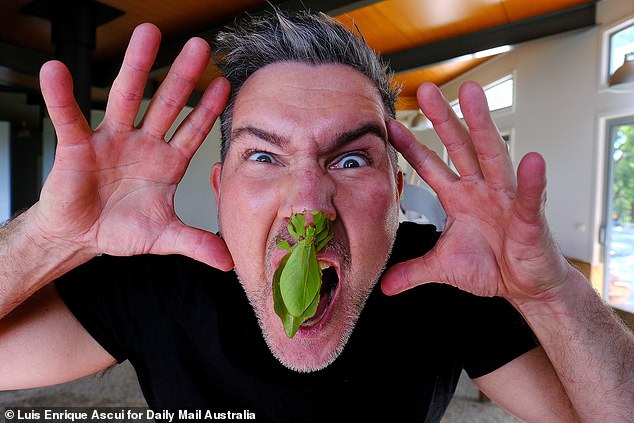 While he is a passionate environmentalist, he isn’t a fan of extreme groups such as Climate Rebellion. ‘You can’t interfere with people’s normal lives, they won’t listen’

A trained zoologist, Mr Humfrey runs tours for school groups, and takes some animals into classrooms.

He describes it as a cross between an animal hotel and hospital.

‘The message is if you have empathy and fun you’ll make positive decisions for environment and care better for animals.’

He’s also written several books, the latest of which is about insects and is used in classrooms around the country. 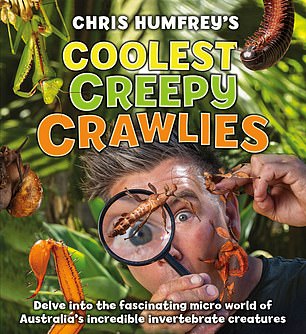 He’s also written several books, the latest of which is about insects and is used in classrooms around the country

His interest in animals came from his parents, a teacher and a nurse, taking him on family outings as a boy.

‘For me jumping the fence and running into the paddocks, that was my going to church or to the movies.’

The oldest animal he has is a frog he rescued from a urinal in Coffs Harbour when he was three – 45 years ago. The frog, which he calls Freddo, is now 45 and ‘my best friend’.

He’s also got a turtle that’s been with him for 39 years, since he was nine.

Mr Humfrey describes the reality of living with 2000 animals as ”a dream come true and a nightmare’.

He works up to 18 hours a day, has too much responsibility for the animals – ‘especially the babies’ to ever go away on holiday, and invariably dreams of the animals every night.

‘Things get crazy busy, we goof it up for photos like it’s a circus, but we are playing god with animals in captivity here.

‘It’s an honour and a big job, we have to do the right thing.’

‘When you raise animals you realise they’re no different from us – they want security, a cuddle, a good feed, they like to engage with us.

‘Once they trust you, they want to be part of your world and us humans have taken their world away from them in many places through habitat loss land clearing.

‘We are a greedy species.’

‘I was told it was a lean meat and sustainable, but when you see their big doey eyes looking up at you, I just can’t do it.’ 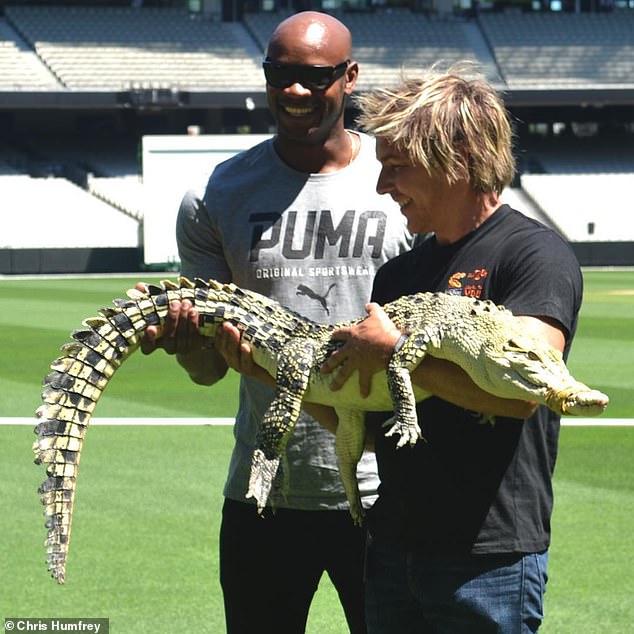 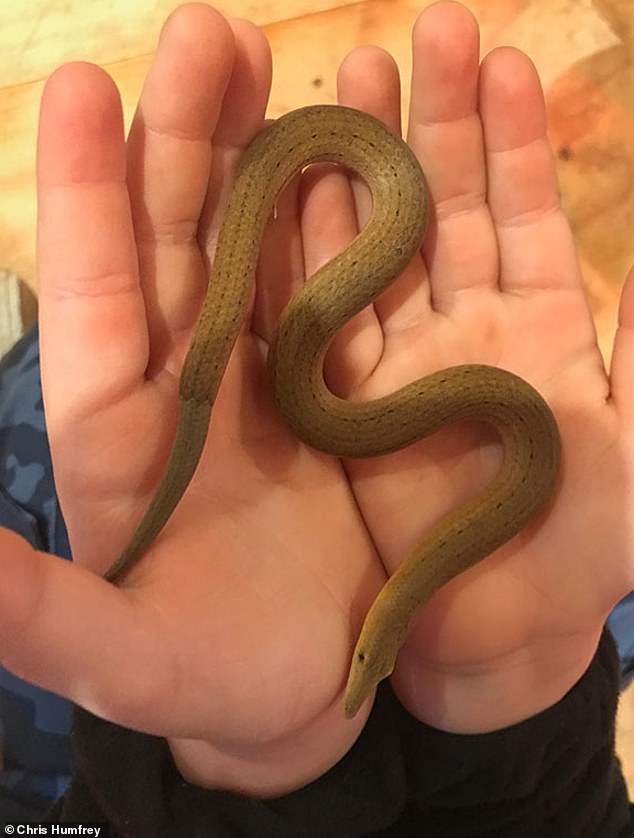 The family does a lot of nursing and caring for newborn and threatened animals.

‘There’s always a birth, death or a marriage here.’

But joy is everywhere too, he says. The animals are part of the family.

‘The penguins we’ve got, some of them hatched in my hands from eggs. The kookaburra thinks I’m his dad, when I laugh he laughs too.’

That doesn’t mean he and the family are not constantly on guard. 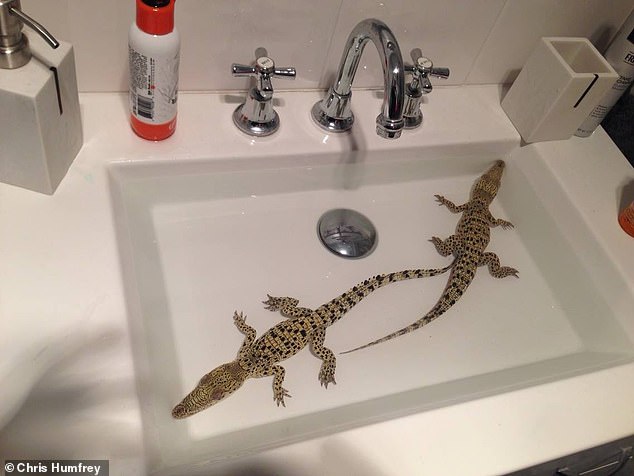 He is sure one of the reptiles, the three metre saltwater croc, ‘Terminator’ is patiently waiting for the chance to ‘get’ someone who walks into her enclosure half asleep.

‘She’d enjoy it too.  But that’s what they’re designed to do, that’s why they’re amazing.’

He’s also got four cassowaries at ZooHQ, which because of their dagger-like claws, are dubbed ‘the world’s most dangerous bird’.

One is so villainous the family called it ‘psycho’ and keeps away from it.

Mr Humfrey is quick to point out not all cassowaries are dangerous, and usually only when defending their chicks.

In that scenario, watch out.

In the United States a cassowary kicked its owner, Marvin Hajos, to death in 2019.

Mr Hajos, 75, made the mistake of falling over in his yard.

‘We’ve got one called Sticky Beak we can pat, Mr Humfrey said. ‘We’ve also got one called Psycho, you cant go in his cage with with him, he would disembowel you, no problems.

‘But he’s beautiful all the same.’

Mr Humfrey said ‘the most exciting day of my life’ was spent hiding in a tree for four hours after he accidently backed into a cassowary, which then charged him every time he tried to climb down.

Even the kangaroos can be a worry he said.

‘I often get bailed up by one of our male kangaroos. You think they’re cute and cuddly, but this guy is 90 kilograms and is built like Mike Tyson. He tries to box me too.

‘He’s also got very sharp talons and could disembowel you if he wanted to.’