Huge fire breaks out in Winnie the Pooh woodland

A huge blaze has broken out in woodlands featured in AA Milne’s beloved Winnie the Pooh children’s books.

The fire, which started last night and is still burning, swept across 14 acres – an area equivalent to six large football pitches.

A huge blaze has been burning overnight in Ashdown Forest, near Kingstanding (pictured)

At its height six crews fire were battling the blaze. But this morning only four fire engines remained at the scene.

The cause of the fire isn’t yet known but it’s feared to have been sparked by a barbecue or discarded cigarette.

A.A. Milne grew up surrounded by the forest, which he renamed Hundred Acre Wood when he wrote his beloved kids’ tales in the 1920s.

One of Christopher Robin, Pooh, Piglet and Eeyore’s famous escapades was inventing the game of Pooh-sticks at a wooden bridge in the forest.

Pooh-sticks Bridge remains today and attracts visitors from all over the world who play the wholesome game of dropping sticks into the stream for a race. 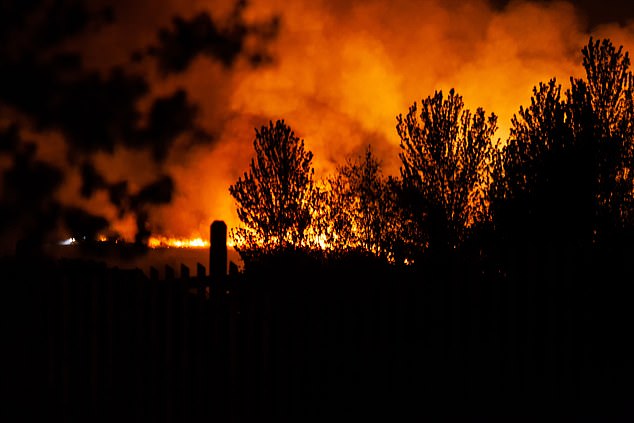 Nature lovers fear the inferno has destroyed many birds’ nests containing eggs and chicks, and has killed rare butterflies and other wildlife.

On February 26, during the heatwave, two separate blazes started within an hour of each other in the forest on the hottest February day on record.

Firefighters said more than 35 hectares had been ravaged.