Hundreds of panicked revellers were seen running in terror after an ‘acidic liquid’ was hurled over the Notting Hill Carnival crowd.

Footage emerged online of people screaming and shouting as they ran away from the scene.

A number of people were injured as the crowd ran in fear and three people reported skin irritations. 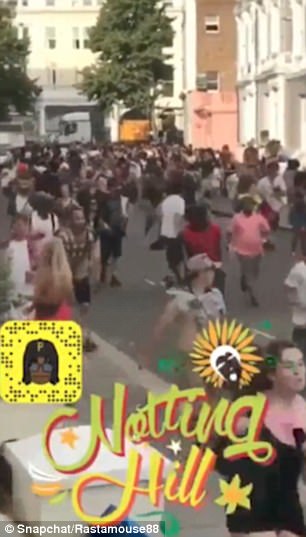 One reveller wrote on Twitter: ‘Yep carnival is cancelled for me I’ve just received information from someone I know that there was an acid attack.’

The Metropolitan Police said the liquid was thrown over people gathered at St Charles Square at 7.55pm.

The force have not made any arrests in connection with the incident but are investigating the reports.

A spokesman said: ‘Some of the crowd in the area then quickly dispersed, which caused injuries, who have since received treatment from the London Ambulance Service at the scene.

‘Three people have also reported skin irritation injuries, although these are not thought to be serious.’

The streets of west London were again packed with people enjoying the Caribbean music and food on a scorching bank holiday Monday, with the mercury soaring to 84F (29C). 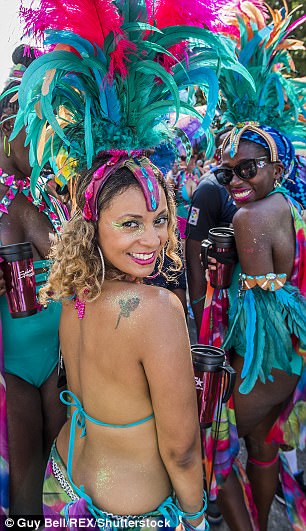 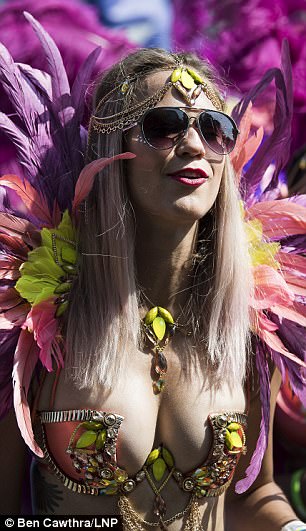 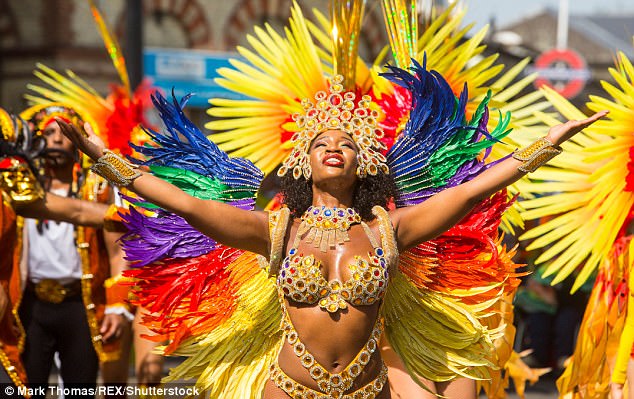 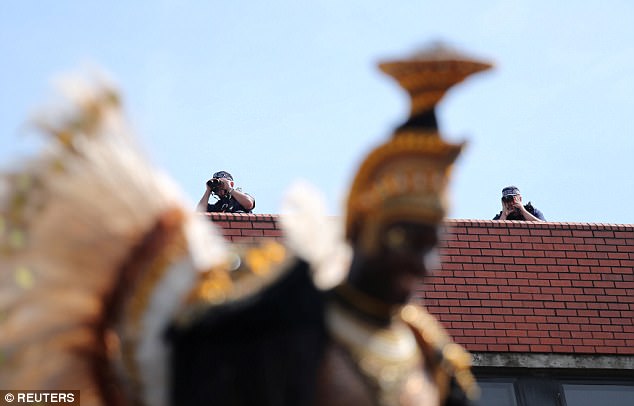 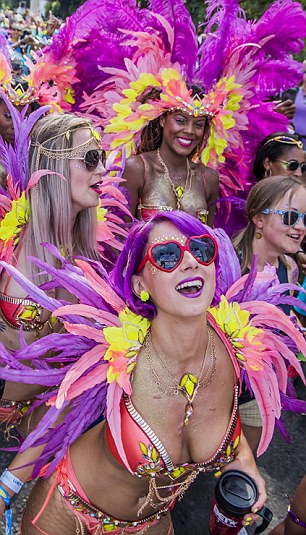 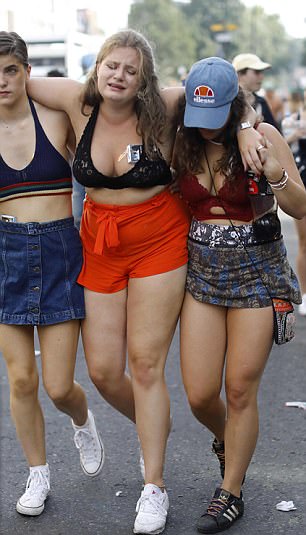 And on the main parade day scores of scantily-clad performers are adorned in glitter and feathers, while other revellers have been photographed in the road ‘daggering’ – a Jamaican dance from that combines dry sex and wrestling.

For the second time in two days, the festivities were put on hold to observe a minute’s silence in memory of those who died in the Grenfell Tower fire.

With 155 arrests made on Sunday – more than double the number on the corresponding day the previous year – police will be hoping for a quieter finale than 12 months ago, when 245 people were detained amid scenes of chaos on the Monday.

And, as of 3.30pm, they appeared to have got their wish with only 27 arrests made by mid-afternoon. 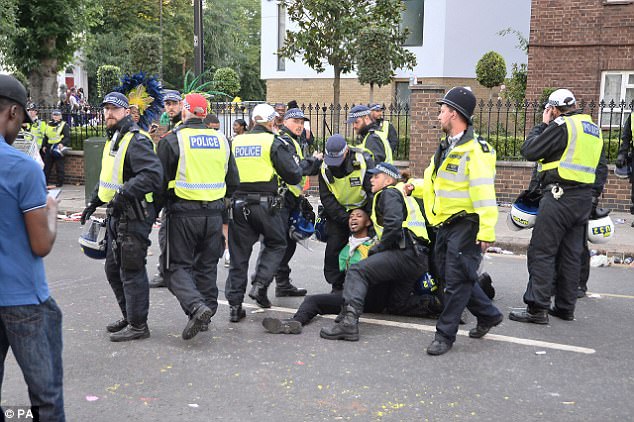 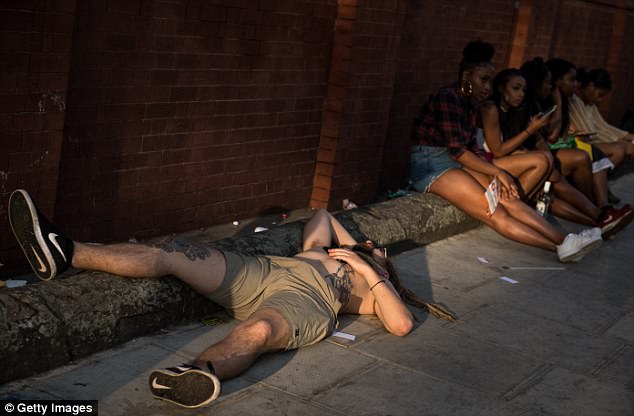 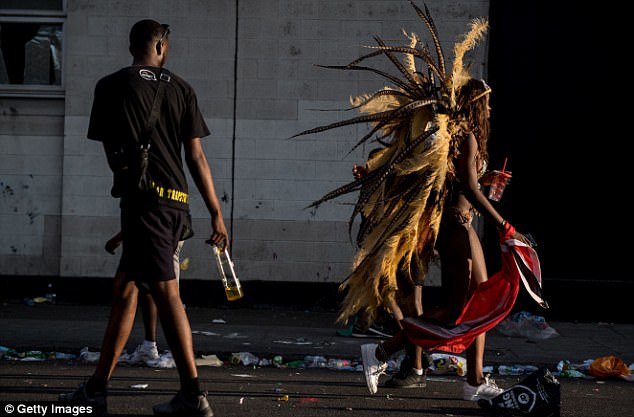 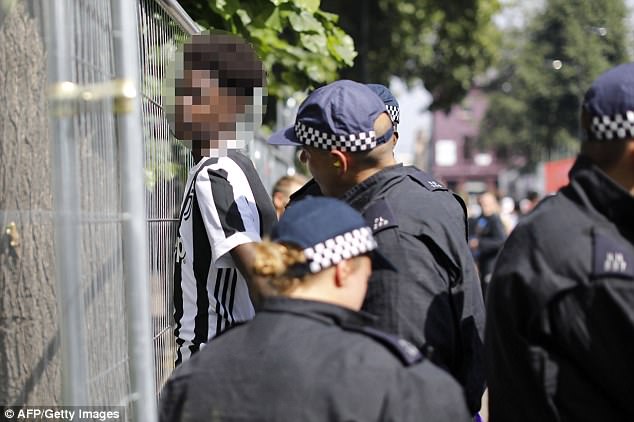 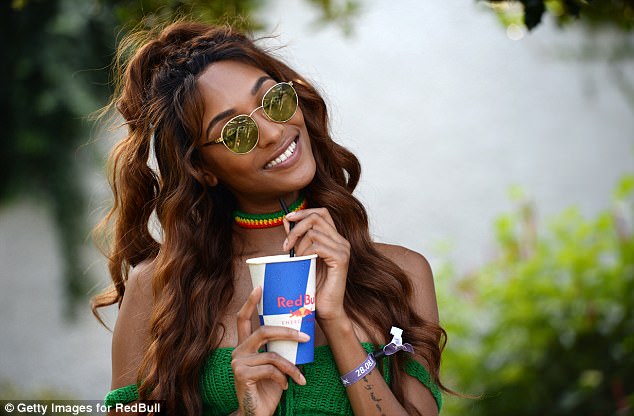 So far this weekend, ten people were detained on suspicion of carrying a blade, 13 for GBH, ABH and assault, a further five for attacking police officers and 17 for public order offences.

The most common crime was drug possession, with 64 arrests for illicit substances, nine for sexual offences, three for criminal damage, six suspected thefts and 17 ‘other offences’.

Metropolitan Police officials said thousands of officers would be on patrol on each day of the event amid the heightened security concerns.

The London Ambulance Service said it had treated 344 patients on Sunday during the first day of carnival – many for alcohol-related injuries.

A ‘staggering’ clean-up operation will get under way overnight, as the carnival draws to a close.

By day-break on Tuesday, an estimated 300 tonnes of rubbish – the weight of 25 London buses – will have been swept from the streets where carnivalists partied just hours before.

More than 200 people, 30 refuse trucks and a large motorway vehicle to wash down the roads will be used by the council’s contractors SUEZ to clear the area.

Councillor Mary Weale, lead council member for communities with responsibility for carnival, said: ‘This year’s Notting Hill Carnival was different to any other, the Grenfell Tower fire was something that we all thought about.

‘However, it was heartening to see the numbers of people that came to carnival and the many who stopped and reflected at the minute’s silence on Sunday and Monday.

‘The challenge our council officers and SUEZ face clearing up after one of Europe’s biggest street parties before people head off to work on Tuesday morning is a staggering task.

‘I would like to thank all of them for their efforts.’