Hundreds of eager swimmers and surfers have flocked to Bondi Beach for the first time since it was closed five weeks ago to stem the spread of the coronavirus.

Large crowds ran into the surf at the famous tourist spot after waiting patiently for lifeguards to remove the metal barriers at the beach’s entrance at 7am on Tuesday.

Those wanting access to the water are being funneled through designated entry and exit points and the sand remains out of bounds to sunbakers.

Councils governing beaches on Sydney’s eastern suburbs have threatened to close the beaches again if the new rules are not followed – while the mayor of Waverley Council has told those not local to Bondi to stay away.

Freedom at last! Beachgoers sprinted into the surf at Bondi Beach on Tuesday morning as the famous strip of sand was opened for the first time in five weeks 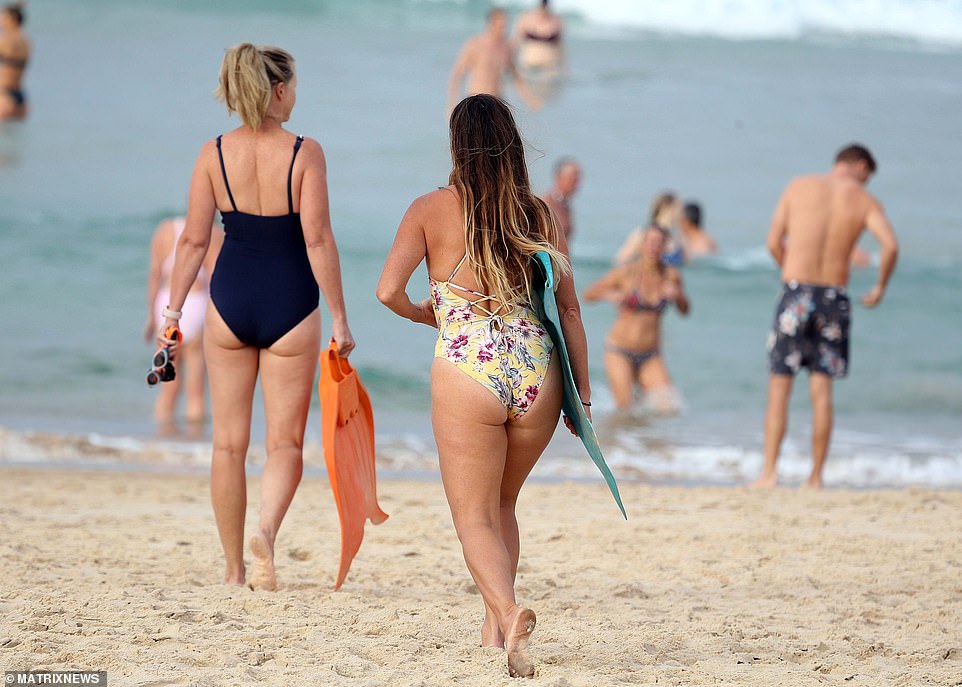 Never mind the weather: Hundreds of revellers filed onto the beach despite overcast conditions after waiting patiently for lifeguards to remove the metal barriers in front of the famous tourist spot at 7am 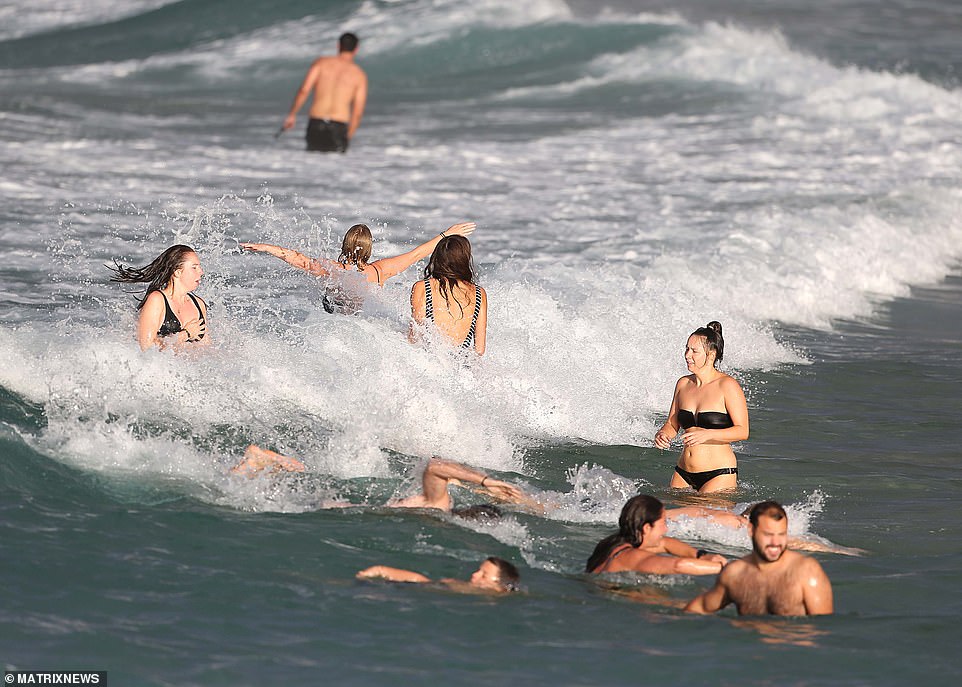 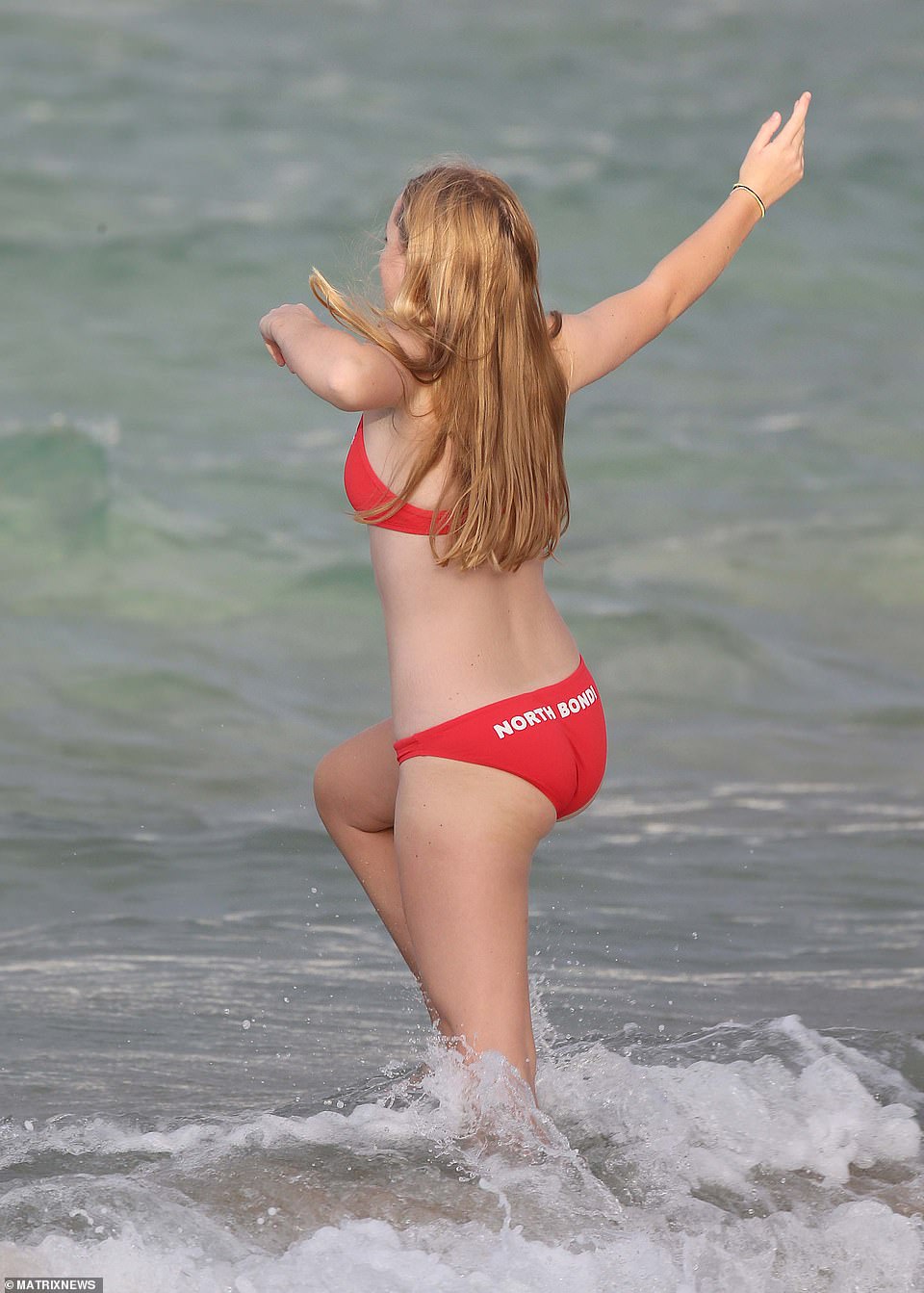 From Tuesday, Waverley residents are permitted to swim or surf at Bondi and Bronte – and surf only at Tamarama – between 7am and 5pm on weekdays.

Waverley Council mayor Paula Masselos said Bondi Beach was busier than usual for 7am but believed people were doing the right thing.

‘So far I’ve been really delighted at how the corridors are working,’ Ms Masselos said.

Surfer Scott Heappey said there were lots of surfers out in the water at Bondi but noticed people were observing social distancing.

‘It’s really nice to be back in the water. 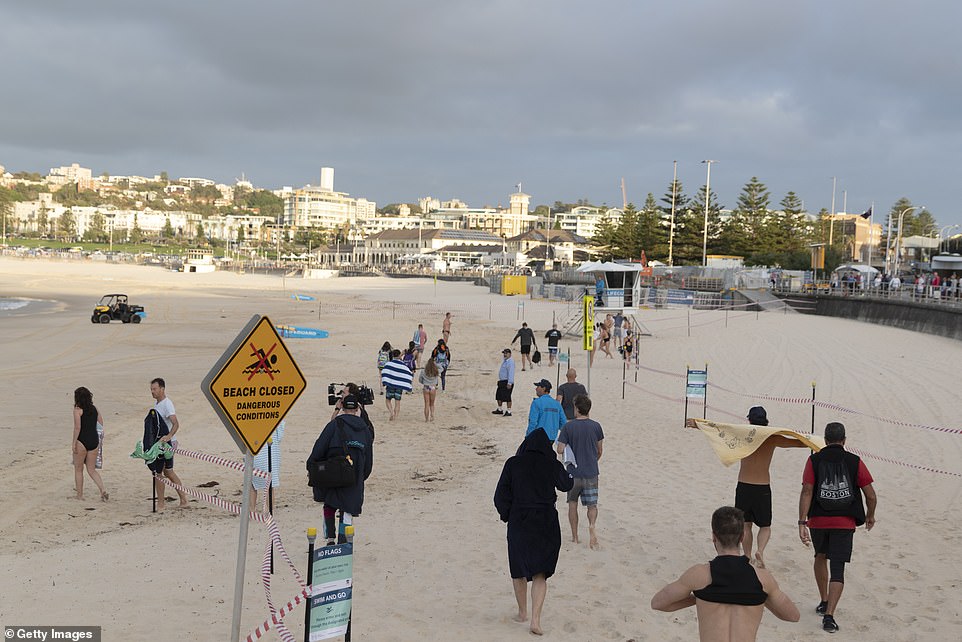 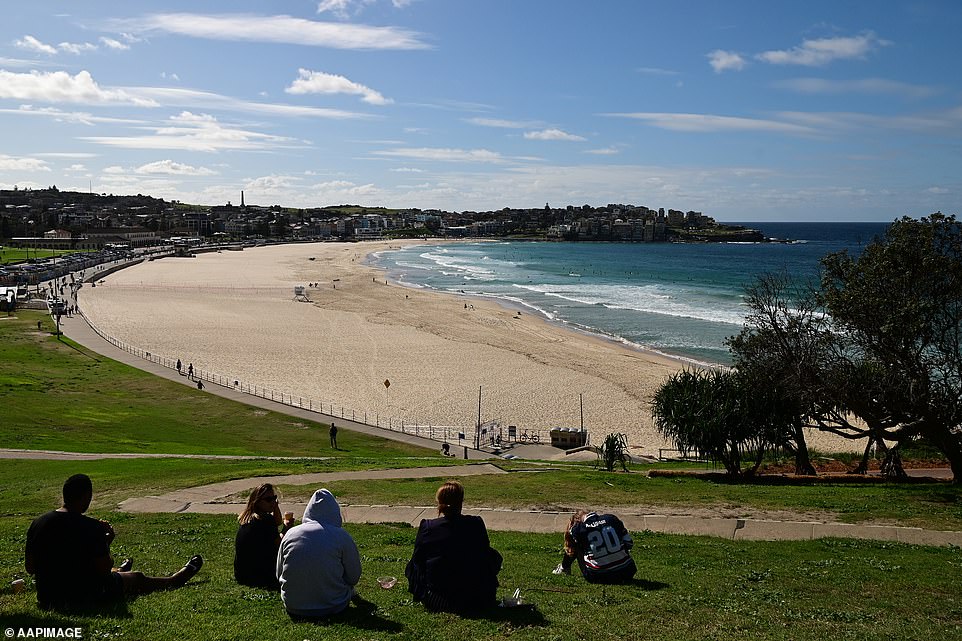 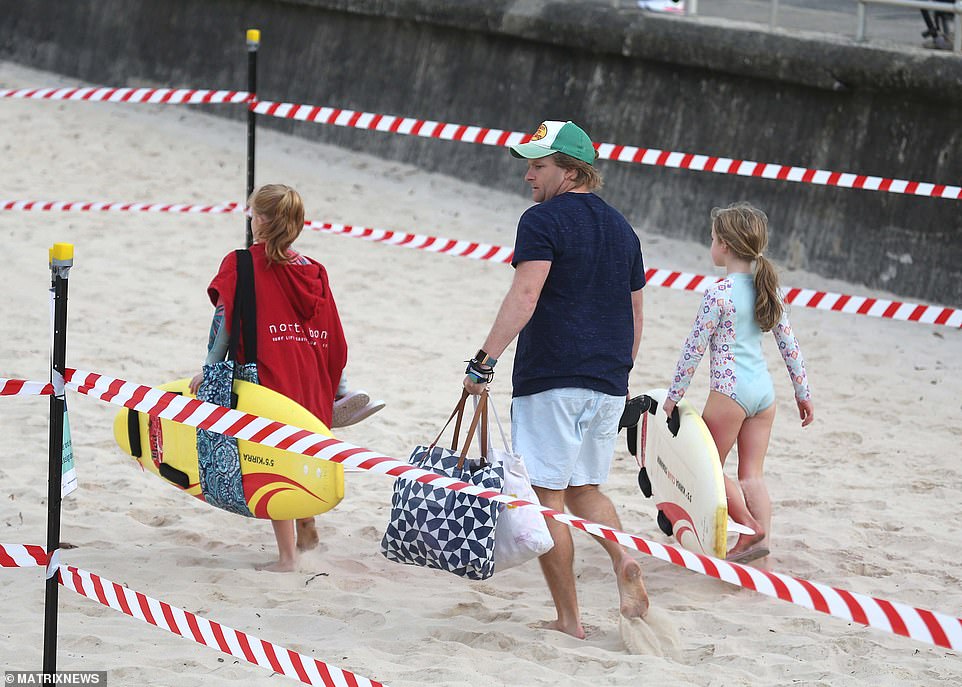 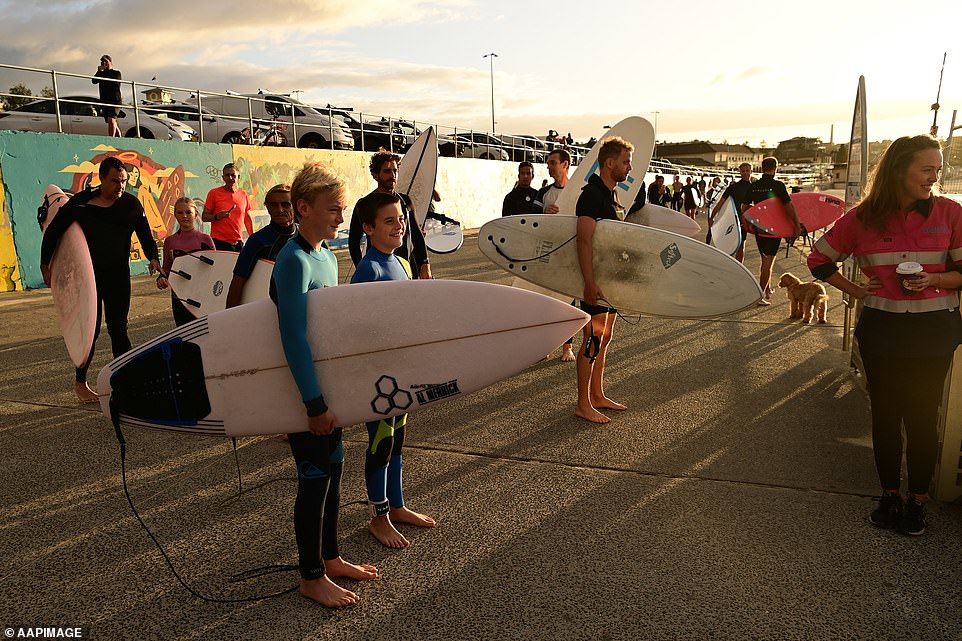 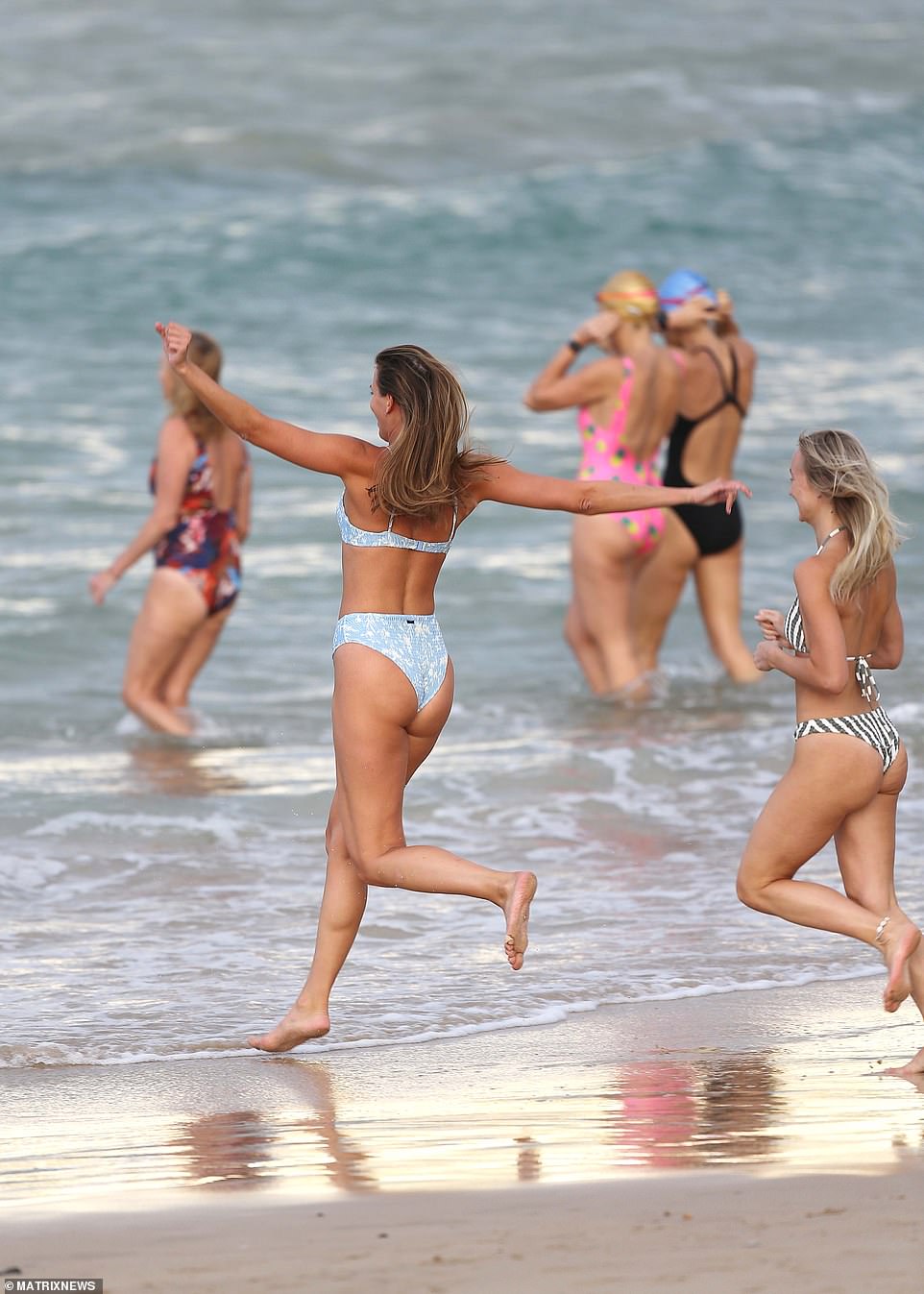 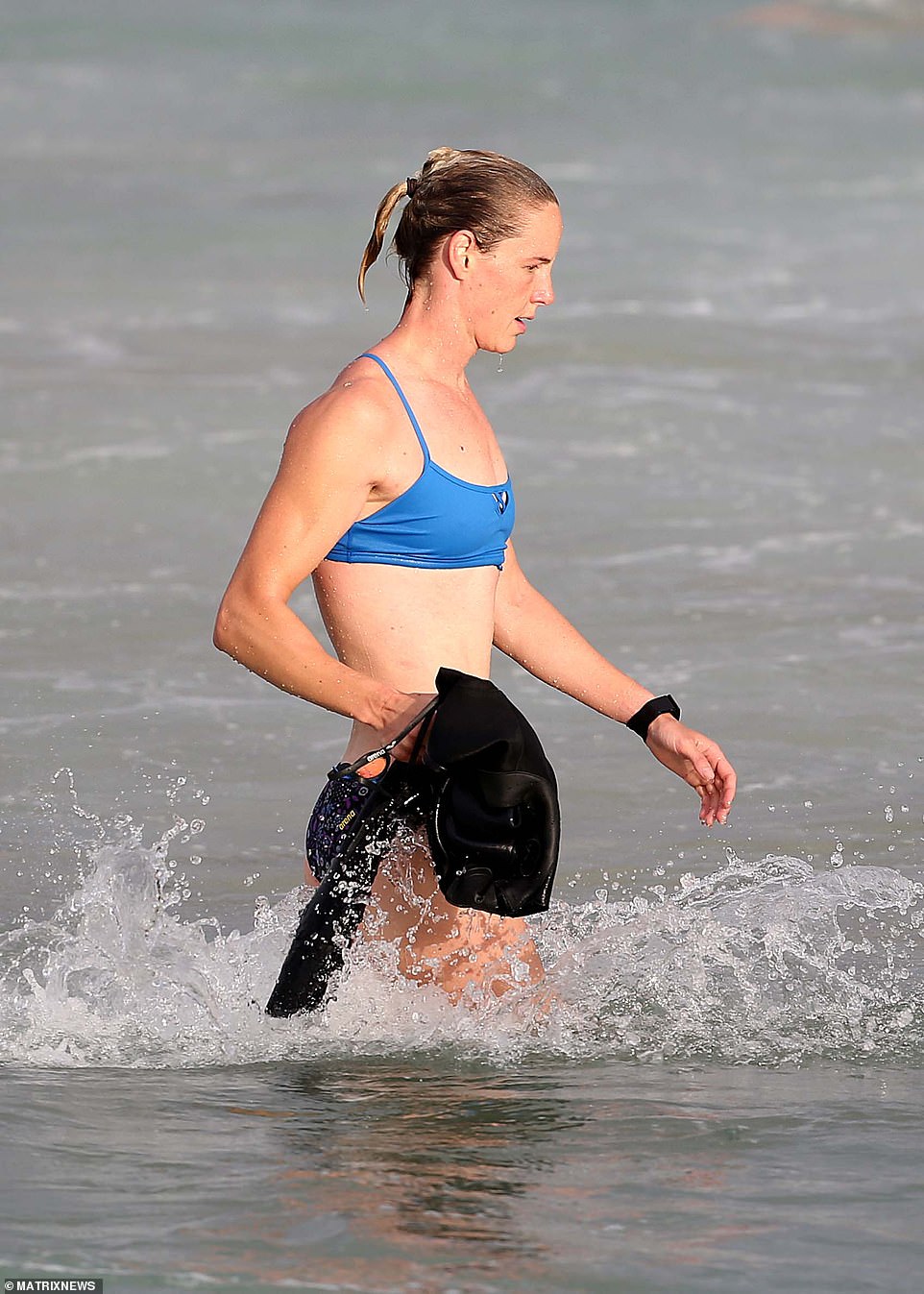 Taste of freedom: A woman strides through the surf on Tuesday morning. Waverley Council mayor Paula Masselos said she believed most of the beach users were doing the right thing

‘I come down here three times a day. That’s my exercise and that’s what I do.’

But despite being told to access the water via a taped-off corridor of sand, many jumped over the promenade wall to get onto the beach.

Bondi was closed on March 21 after hundreds of people flocked to the tourist spot, with authorities at the time slamming the ‘irresponsible behaviour’ of beachgoers.

Waverley Council has stressed the beaches is still closed to non-exercise purposes as Bondi is still the district with the highest number of COVID-19 cases in Australia. 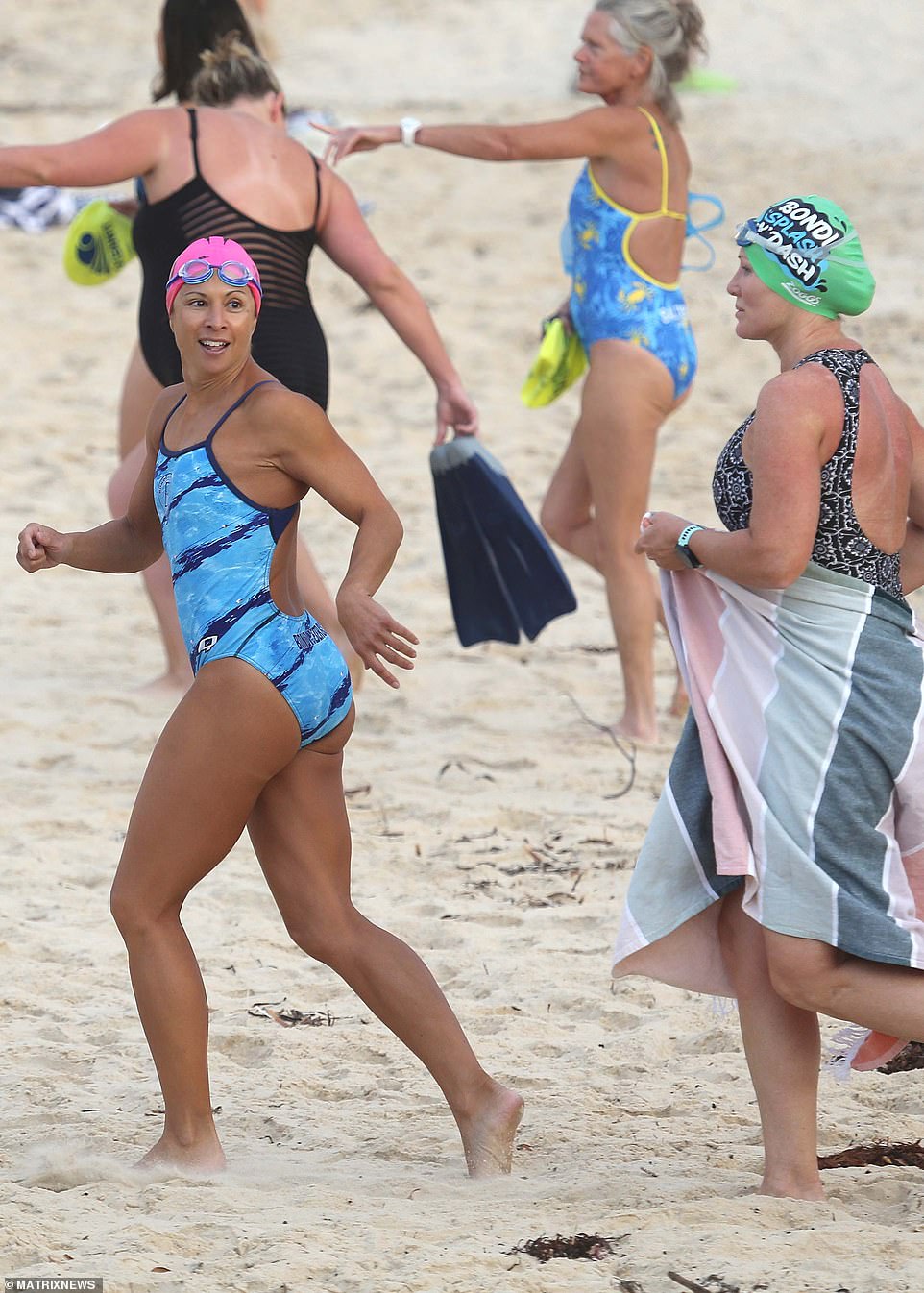 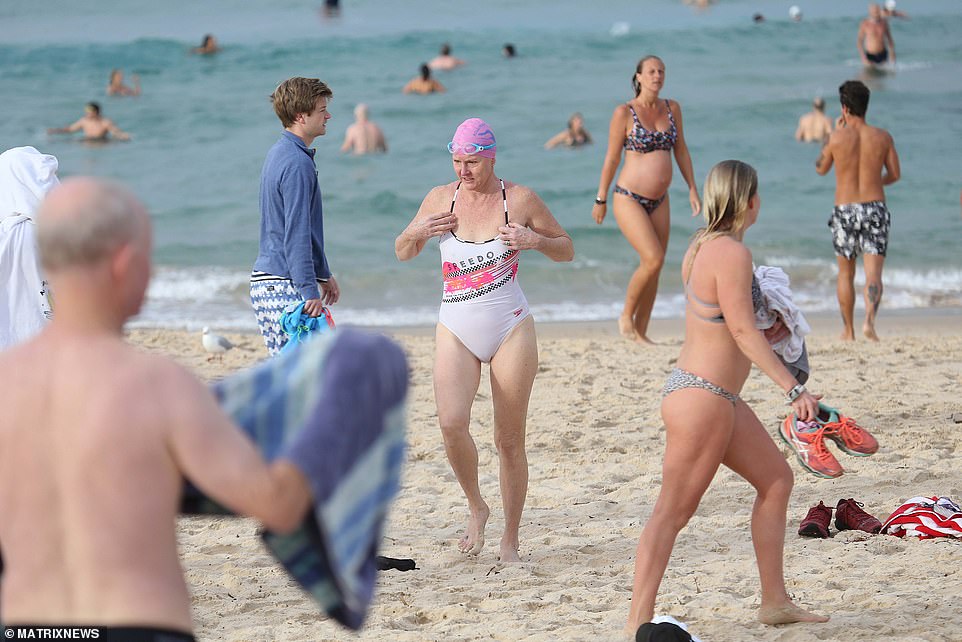 The mayor said ‘swim and go’ and ‘surf and go’ measures were strictly for Waverley residents and people shouldn’t drive to the beaches from further afield.

All of Randwick City Council’s beaches will again reopen from Tuesday without any time restrictions while those in Dee Why, Freshwater and Manly, under the Northern Beaches Council, remain closed.

Residents are allowed on the sand so long as they are ‘jogging or doing some legitimate exercise’.

‘Lifeguards, rangers and other council staff will continue to monitor numbers on the sand and in the water and will restrict access or temporarily close beaches if crowd numbers exceed safe limits,’ Randwick council said in a statement on Monday.

Mayor Danny Said said: ‘Our message could not be simpler – Randwick City beaches are to be used for exercise only.’ 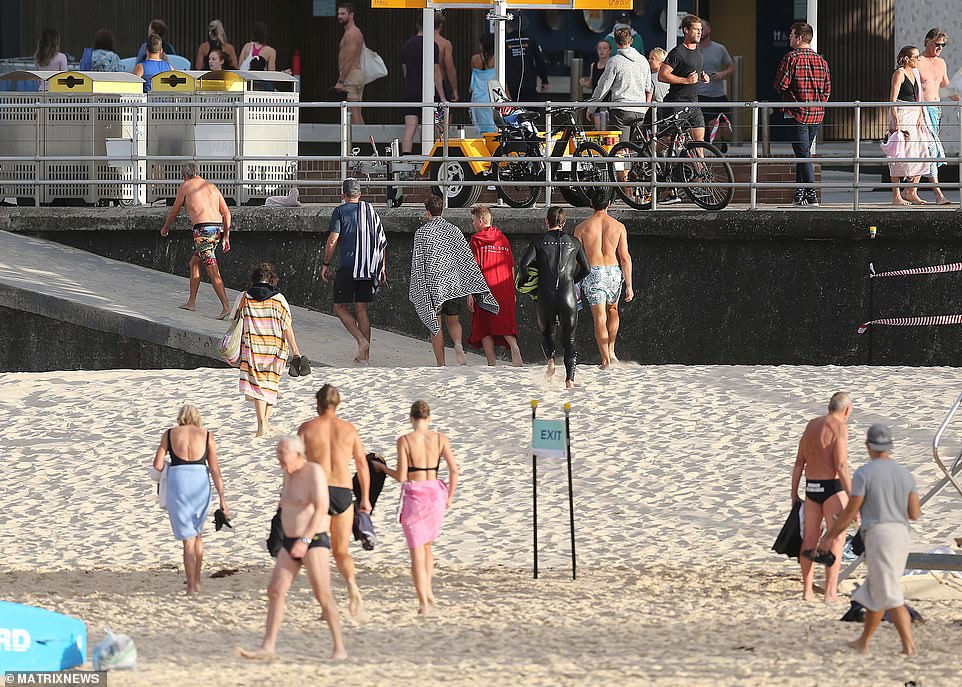 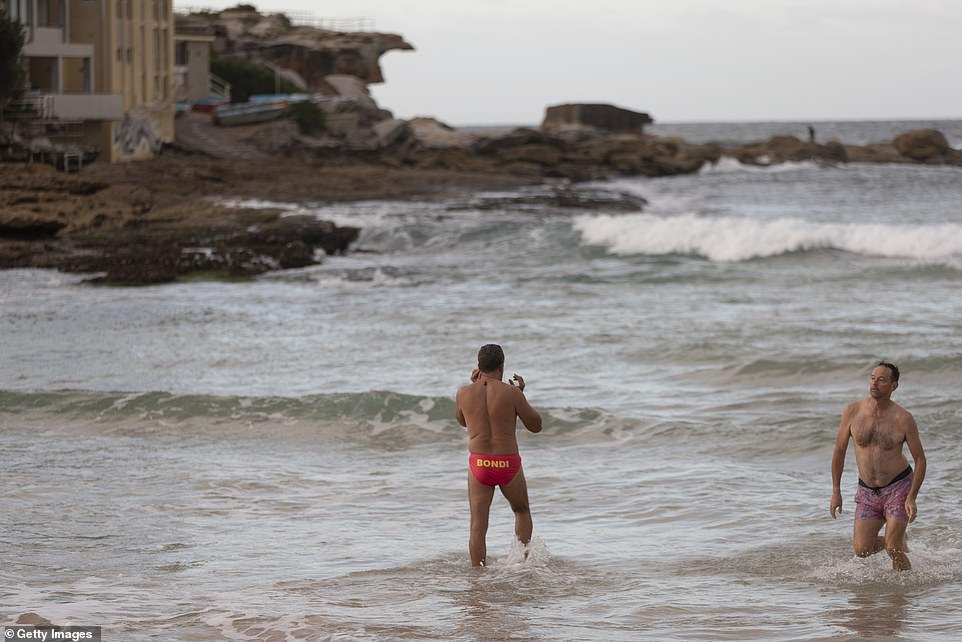 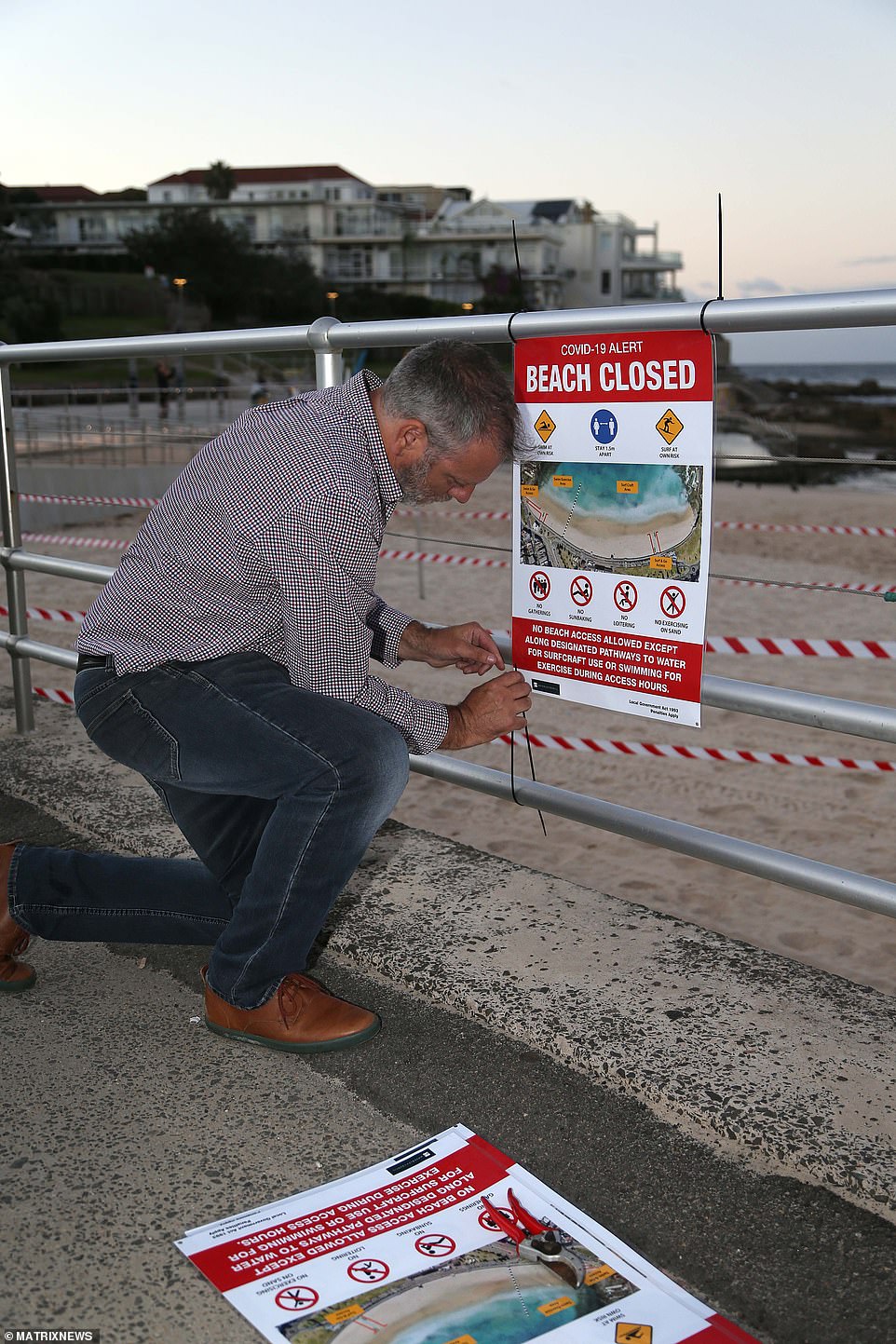 The road out of the pandemic: ‘Beach closed’ signs are removed from Bondi Beach on Tuesday morning. The beach has been closed to the public since March 21 to help slow the spread of COVID-19

Northern Beaches Council chief executive Ray Brownlee on Monday said only Dee Why, Freshwater and Manly beaches were closed in the city’s north.

‘Council will continue to review the situation …. in the coming week,’ he said in a statement.

It comes as Australia recorded just seven new cases of coronavirus on Monday.

A total of four states and territories recorded no new cases as Australia’s lockdown restrictions continue to smash the COVID-19 curve.

Australia’s reduction of new infections is the envy of the world, with the global number of cases rising to more than three million globally on Monday night. 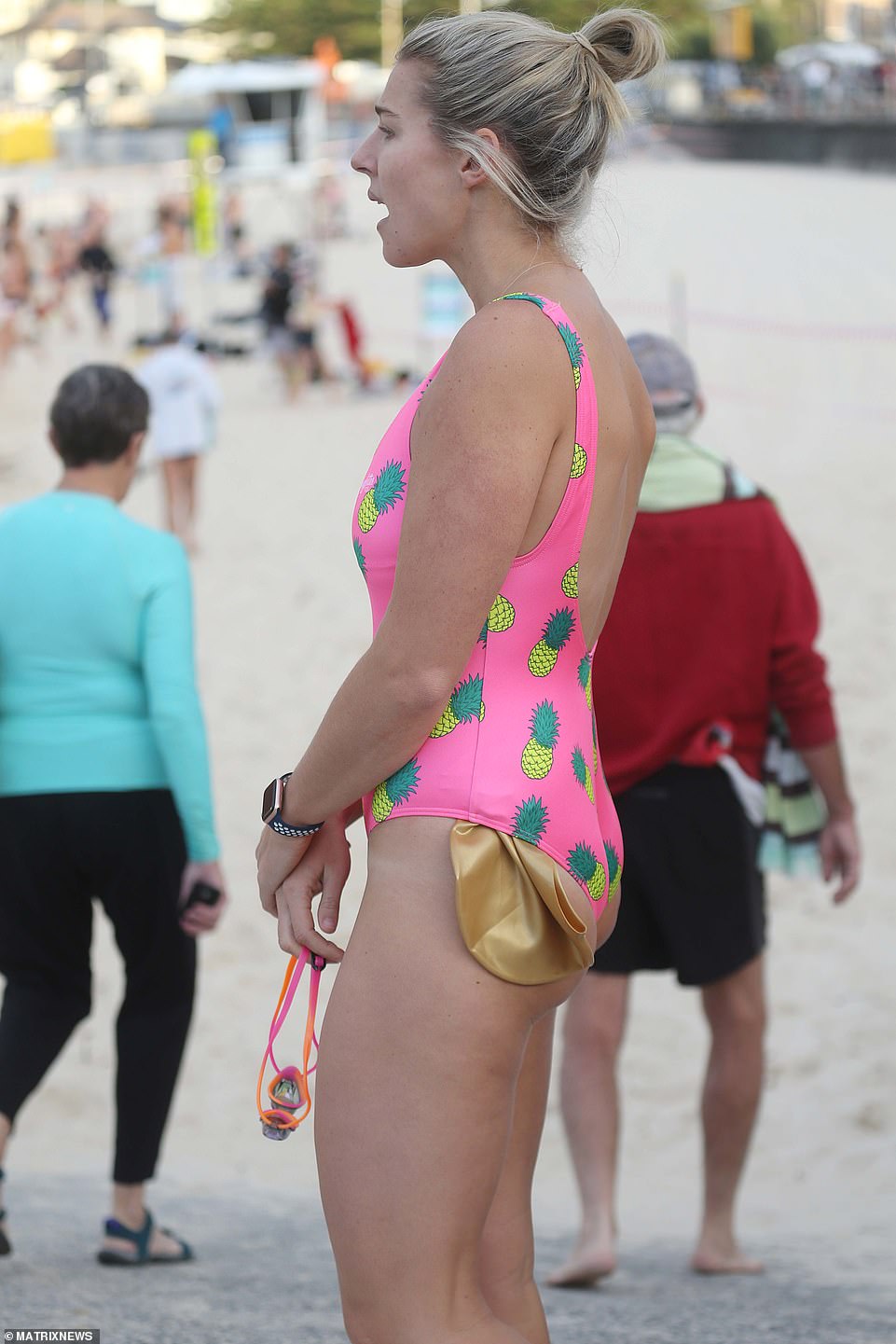 A beachgoer in a pineapple-themed pink bikini at Bondi Beach on Tuesday. She was among hundreds to celebrate the beach re-opening as coronavirus restrictions nationwide are relaxed 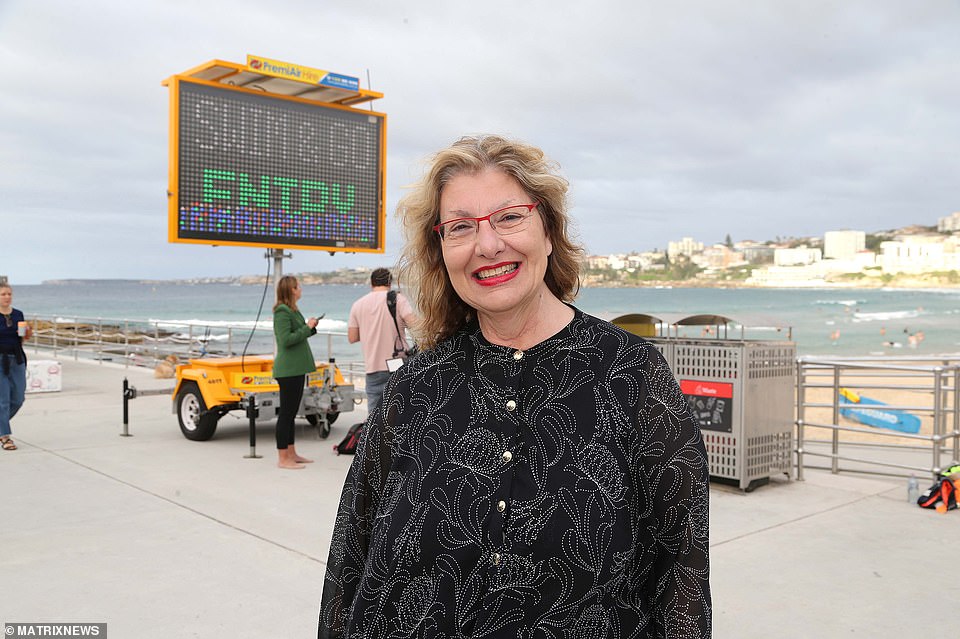 New beginnings: The large ‘beach closed’ signs at Bondi have been replaced with signs directing beachgoers to use special entry points onto the sand 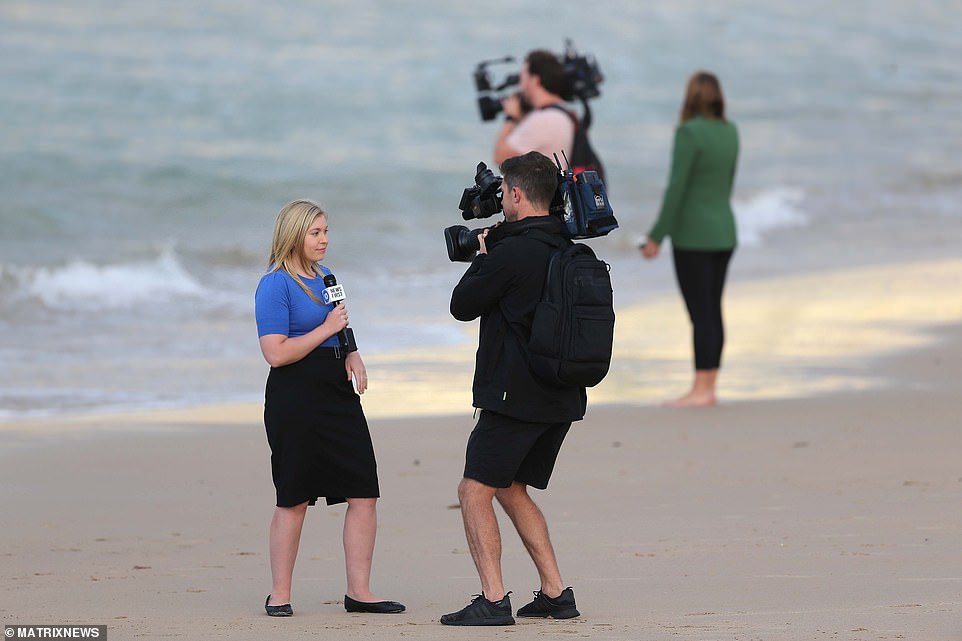 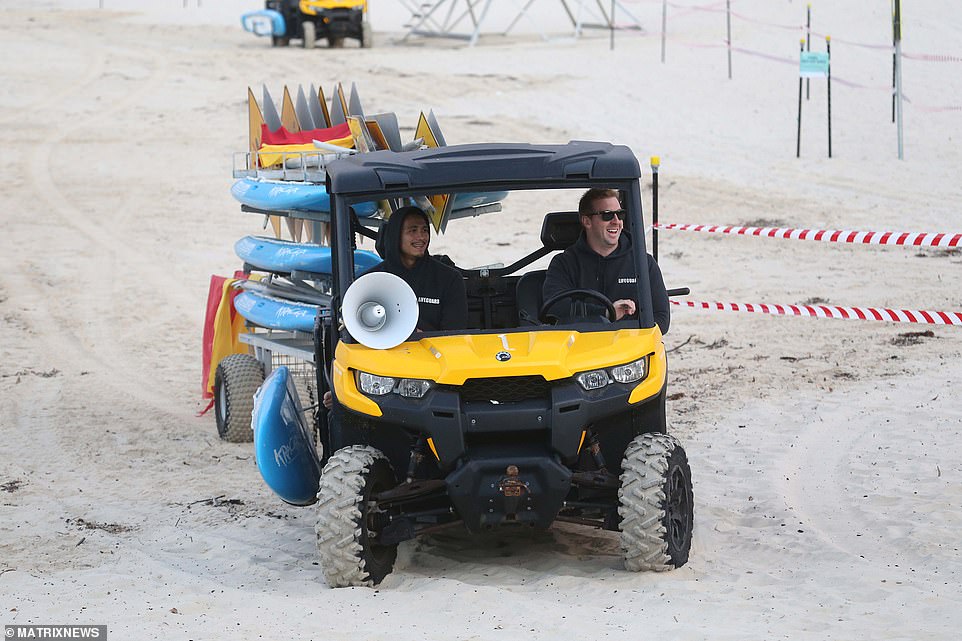 Lifeguards in a buggy patrol Bondi Beach. Beachgoers in Sydney’s eastern suburbs have been told if they do not follow the rules about what activities are allowed the beaches will be closed again 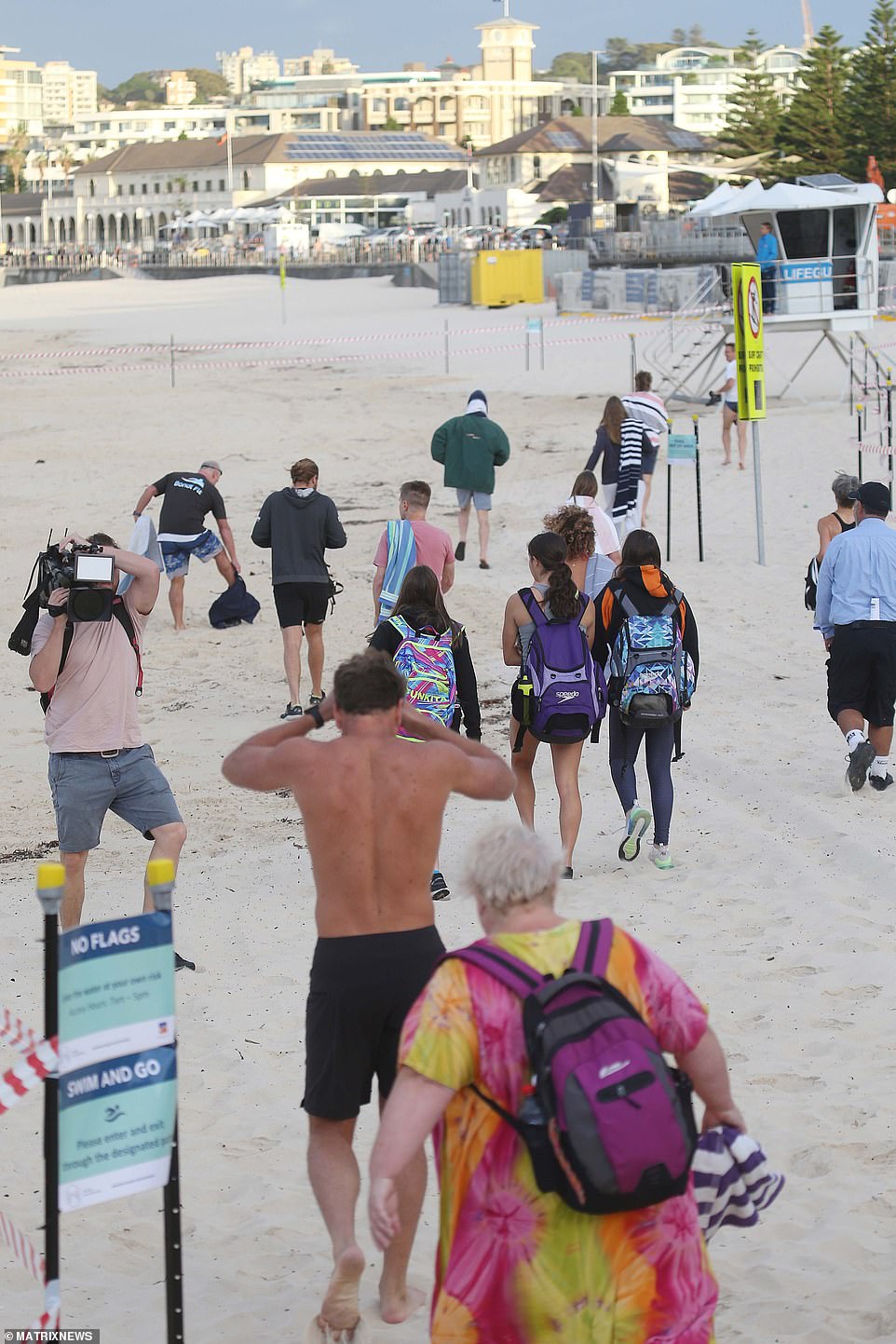 Victoria recorded one new infection but had a separate case reclassified to New South Wales – leaving the state’s total unchanged at 1,349.

New South Wales and Tasmania had two new cases each while Queensland had three. 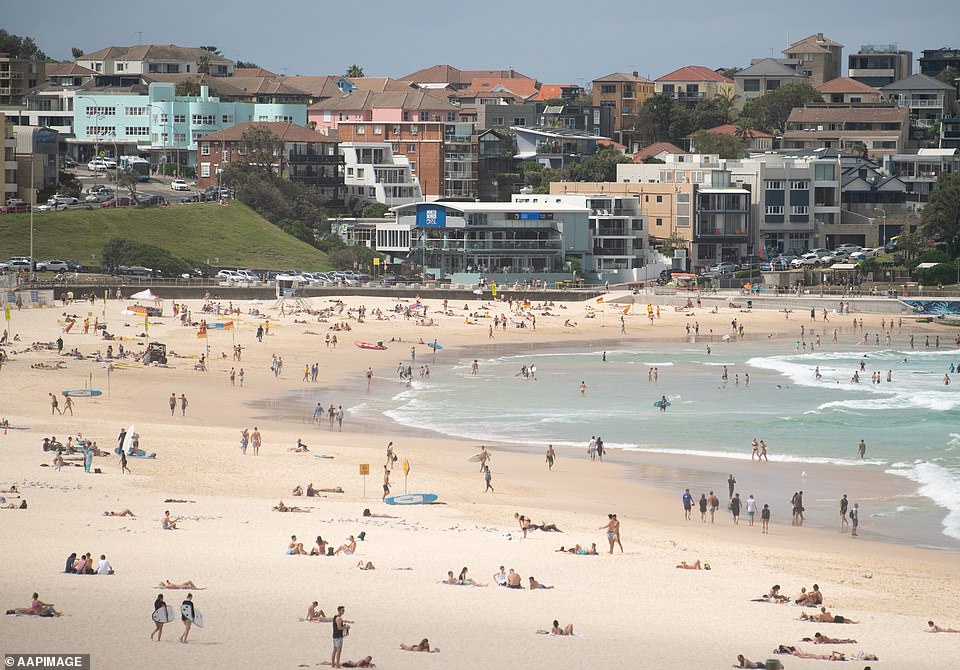 Residents are allowed on the sand so long as they are ‘jogging or doing some legitimate exercise’ with lifeguards and rangers patrolling the beach. Hundreds of people are pictured on Bondi Beach on March 21 – prompting authorities to close the sand indefinitely

Travel bans, closed borders and business shutdowns have slashed the number of new daily cases from a peak of 460 on March 28.

He said that if the progress continued, restrictions may soon be gently relaxed – meaning people would be able to sit on a park bench or possibly hold small gatherings.