Hungry bull sharks have invaded a man-made lake in Queensland but many locals have no idea after the council erected an impossibly small warning sign.

The sharks were filmed by 9News in a ‘feeding frenzy’ on Wednesday at Lake Orr in Burleigh on the Gold Coast.

However many locals remain ignorant to the danger and often continue to enter the waters or allow their pets to do so.

Bull sharks are among the most likely sharks to attack humans as they often dwell in shallow waters.

While the council last month erected warning signs around the lake, they do not specify which ‘dangerous aquatic organisms’ are in the water

While Council last month erected warning signs around the lake, they do not specifically state the presence of the predators.

Locals are unimpressed with the signs which were erected in November, deeming it inadequate to signal the dangers that lurk beneath the waters. 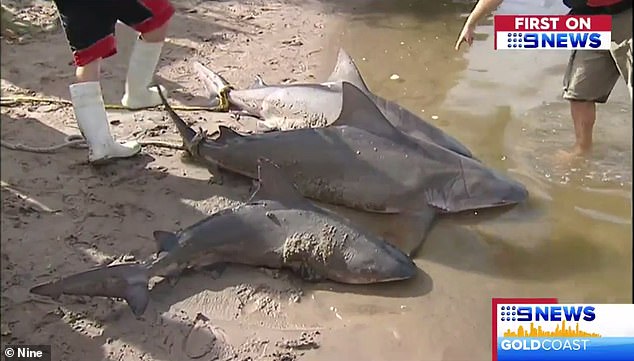 Gold Coast Councillor Hermann Vorster told 9News that people jump into the waters all the time.

‘They alert people to potentially dangerous marine organisms, in fact what they should say is there are sharks here, stay the hell out of the water.’

9News filmed one woman who was taking her dog for a walk along the banks of the lake, allowing her dog to take a swim.

When questioned by 9News journalist Nick Kelly whether she was aware there were sharks in the water, her reaction was one of shock and horror.

City of Gold Coast Council was not immediately available for comment. 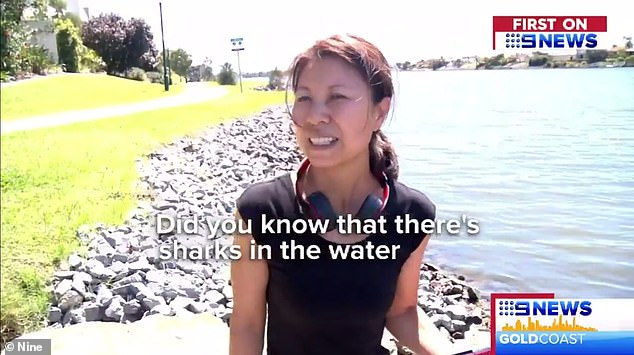 When questioned by 9News journalist Nick Kelly whether she was aware there were sharks in the water, her reaction was one of shock horror