Millions of elderly people were forced to find shelter in Florida as emergency services struggled to evacuate the enormous population of retirees from Hurricane Irma.

About 25 percent of the state’s population is 60 years or older, and 30 percent of them are living with at least one disability, according to the Department of Elder Affairs in Florida.

When Hurricane Harvey ripped through Texas, it caused flooded care homes and dirty water filled with diseases that created health risks for those who could not get out.

Florida, especially in the south of the state, is a hub for the retirees.

Care homes and hospitals have been scrambling to find solutions to protect their patients from risks such as transportation problems, increased health symptoms and psychological issues during the storm.

Experts released a study in 2011 claiming that leaving elderly at their care homes during a natural disaster is more beneficial to their health and will keep them alive.

Emergency personnel evacuate a elderly resident from Savannah, Georgia. Care homes and hospitals had to take special care for transporting their elderly when they evacuated so that they didn’t cause further injury or symptoms for them 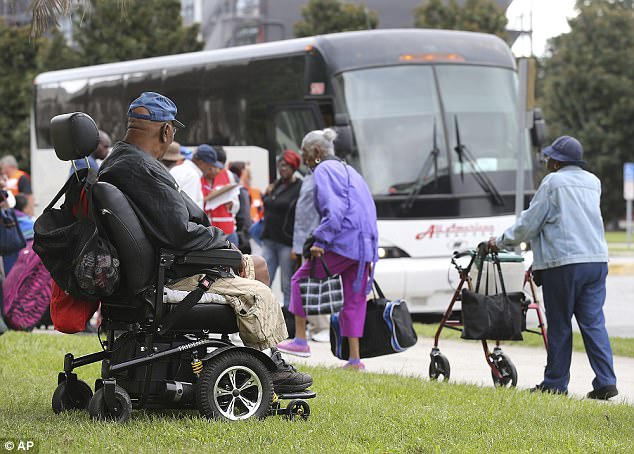 Buses were used to help transport elderly to a different location if their care home or residence was at risk during Hurricane Irma. This man is waiting to board the bus in Savannah, Georgia

More than 6.3 million people in Florida were told to evacuate this past weekend as Hurricane Irma headed towards the United States.

The high-power winds and extreme flooding were a concern for anyone left behind, especially those along the coasts.

Of those 6.3 million were groups of elderly people who had to be transported from their care homes and nursing homes.

There isn’t an official count for how many elderly were evacuated, but an estimated 140 care homes transported patients out of their facility by last Thursday.

Also, the counties of Miami-Dade, Broward and Palm Beach, which have close to a half-million residents over the age of 75, were all told to evacuate.

But some facilities and people decided to stay behind and face the storm.

How care home and hospitals evacuated

A concern when Hurricane Irma made its way towards Florida was how health officials were going to be able to evacuate the elderly safely.

There are more than 370 care homes in Florida for the elderly.

The Cascadia fault line runs 620 miles up the Pacific Northwest and into Canada.

It runs along the coast of California, Oregon and Washington.

While many people have talked about the fault line below this one, San Andreas, Cascadia is anticipated to have a magnitude between 8.7 and 9.2.

This can cause a lot of damage and deaths when it happens, whenever that may be.

An estimated 22 percent of Oregon’s coastal population is elderly.

And 26 percent of the state’s population is disabled.

Since 1995, workers have not been allowed to build hospitals, schools, fire houses and police stations in the high-risk zone.

But people, including the elderly, that are left in that zone when the earthquake hits could quickly be taken down by the rubble.

Safety policies are currently lax around the fault line, which could end up killing thousands of people because those in the area will not be able to get out.

While the government has prepared plans for when this earthquake will occur, they don’t have answers yet on how they will help the disabled and elderly get out.

In the areas that were asked to evacuate, these care homes had to prepare for a variety of potential problems when they decided to transport a large group of elderly.

Memory impairments such as Alzheimer’s disease are a concern because the health officials are taking them away from a routine that they are used to.

Some elderly have reported having an increase in their memory impairment symptoms during a natural disaster when they have been transported from their homes.

To try and combat this, one care home told its patients that they were going on a vacation up north instead of worrying them about the hurricane.

HarborChase of North Collier in Naples, Florida, which is on the gulf coast, evacuated its residents a week early in anticipation of the storm.

‘We told them we were going on vacation, so they were all pretty willing to go on the bus with us,’ Abigail Mitchell, executive director of HarborChase of North Collier, said to The Washington Post.

They transported their 44 residents in charter buses 100 miles north to avoid the deadliest part of the storm.

These facilities have to prepare medication, equipment and other necessities the residents might need while they are transferred.

Officials have to worry, too, about when they load up their patients that they aren’t putting them at risk for injury on these buses.

Where they are transported has to also have adequate care because some larger shelters are not equipped to handle a large elderly population who need specific equipment and medication.

Some care homes took the option of evacuation after what happened during Hurricane Harvey with a residence in Dickinson, Texas.

There were 20 senior citizens who had to be emergency transported to other facilities after their care home flooded. 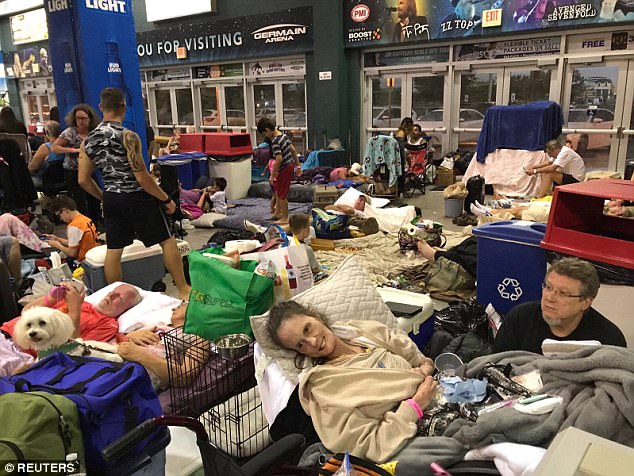 Many people took shelter from the hurricane in the north of Florida. This is from a shelter in Estero, Florida. Experts worry about transporting elderly people to a large shelter for fear that it won’t have adequate supplies and equipment to properly care for them

A picture went viral of the elderly sitting in murky water as they waited for someone to save them causing a lot of controversy for the residence.

So far, no care homes with people still in them have been flooded in Florida during Hurricane Irma.

Moving elderly people during a natural disaster is not always a good decision, experts warn.

And researchers from Brown University and the University of South Florida said that moving elderly people might have a greater impact on their health than keeping them where they are.

The researchers looked into previous disasters, including Hurricane Katrina, to see how it impacted the elderly population.

They found that an increased risk of death and injury happened when elderly were transported during a natural disaster.

‘It’s quite clear to us that anybody with cognitive impairment or memory impairment such as Alzheimer’s disease is at greater risk in a natural disaster such as a hurricane, they do worse in these circumstances.’ 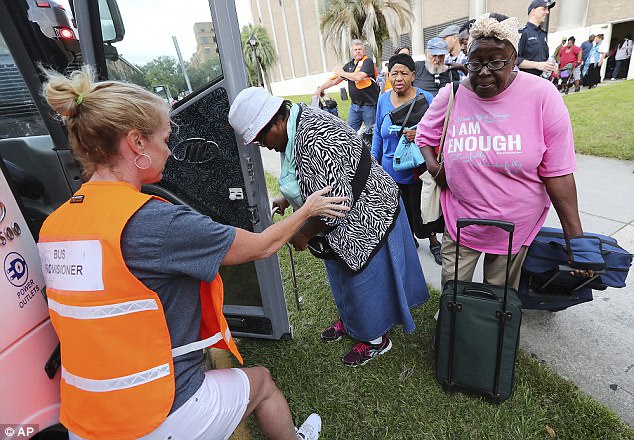 Experts warn that transporting elderly residents too quickly onto buses can cause risk of injury. This is a line of elderly people boarding a bus before the hurricane hit on Saturday

If people are at risk for flooding or building collapses, then the facility should evacuate.

But if possible, Dosa said it is better to keep the facility running as normally.

The study found that elderly who were transported during a natural disaster were more likely to develop a health problem in the first 30 days after the incident.

Care homes in Florida that opted to not evacuate went through a number of steps to prepare them for the storm.

Ponce Plaza Nursing & Rehabilitation Center in Miami’s Little Havana neighborhood decided not to evacuate even though most of the county was leaving.

The building has shuttered windows and enough supplies to last well into the next week for its residents.

Also, none of the residents live on the first floor where flooding would cause the biggest problem.

Whether staying put instead of evacuating was the best option is still to be determined as the full impact of the hurricane is revealed in the coming days.