Immigration and Customs Enforcement (ICE) released 522 migrants in New Mexico and Texas on Wednesday evening – bringing the total number of asylum seekers dropped off by the agency this week to more than 1,000.

ICE dropped off 186 people on Christmas Day and 400 in the two days preceding the holiday, according to CBS News.

The migrants were dropped off at locations in El Paso, Texas, and Las Cruces, New Mexico.

Earlier this week, ICE, without warning, dropped off the migrants at a Greyhound bus station in El Paso, Texas – leaving them with no food, money, or shelter.

But on Wednesday local charitable groups were more prepared to absorb the released migrants and immediately take them off the streets for placement into temporary shelters, Ruben Garcia told the El Paso Times. 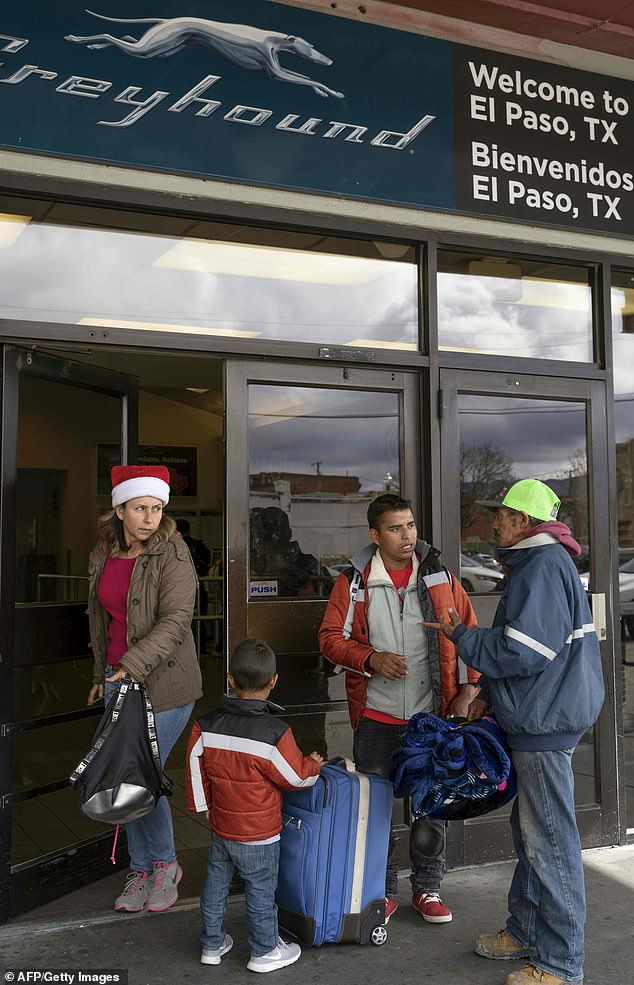 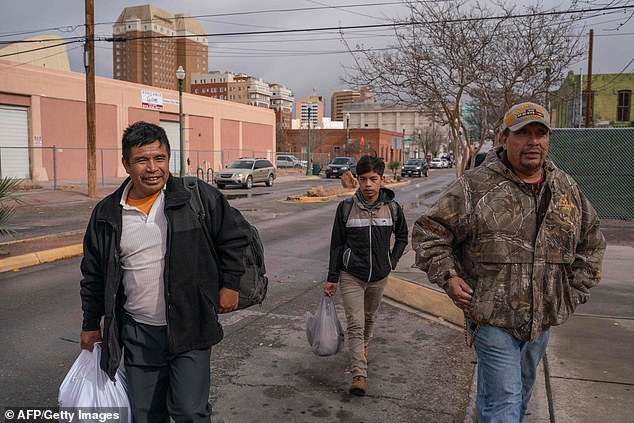 El Paso resident Michael Patino (right) escorts Ramon Poppcus and his 15 year-old son, Henri Giovanni, both from Guatemala, to an art gallery he opened to aid migrants over the Christmas holidays in El Paso on Wednesday 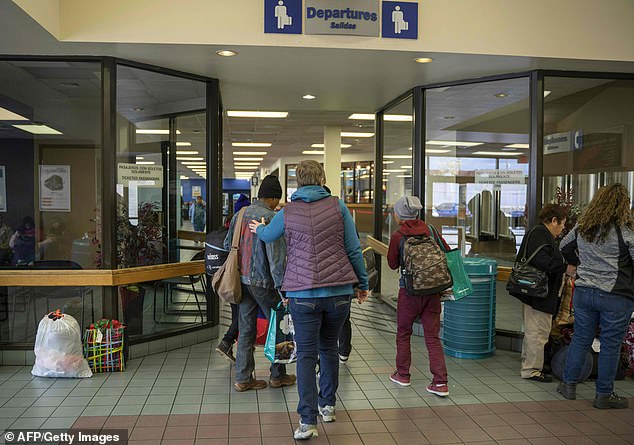 Marijke van Roojen, a volunteer who came from Wisconsin, says farewell to Central American asylum seekers she escorted to the Greyhound bus station after they spent a night in a local shelter in El Paso on Wednesday 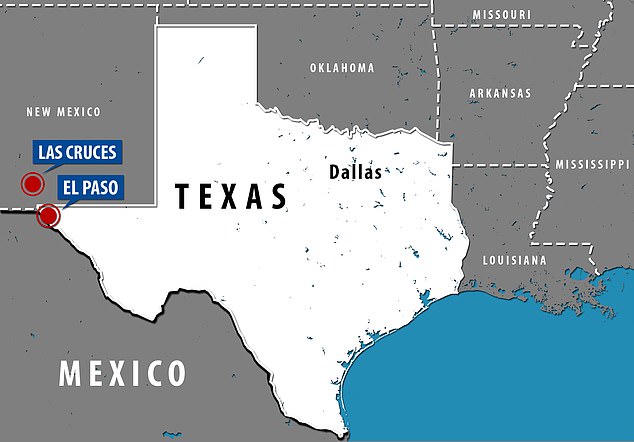 The migrants were dropped off at locations in El Paso, Texas, and Las Cruces, New Mexico. El Paso straddles the U.S.-Mexico border, while Las Cruces is just 45 miles north of El Paso

Garcia is the head of Annunciation House, an El Paso-based shelter for migrants that coordinates with local authorities.

Nonprofits say that the federal government has been releasing the migrants due to overcapacity at the detention facilities, some of whose conditions are quite harsh.

‘The situation is really difficult for them.’

City officials in El Paso were left scrambling on Tuesday to provide a place to stay for the migrants, most of whom were planning to travel to another destination so they could stay with a sponsor while the government reviews requests for asylum.

The chaos along the border has been exacerbated by the news of the deaths of two migrant children – the latest of which happened on Tuesday.

U.S. Customs and Border Protection ordered medical checks on every child in its custody after an 8-year-old boy from Guatemala died, marking the second death of an immigrant child in the agency’s care this month.

Earlier on Tuesday, Jakelin Caal, a 7-year-old girl from Guatemala who died after she and her father were arrested after crossing the border, was laid to rest in her native village of San Antonio Secortez.

The deaths of young migrant children has sparked outrage over the administration’s policies toward asylum seekers. 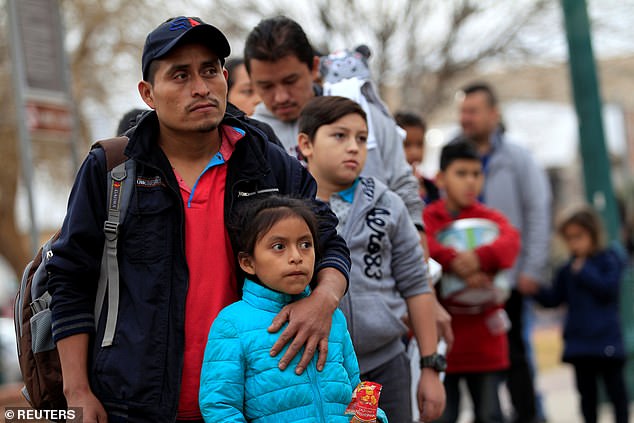 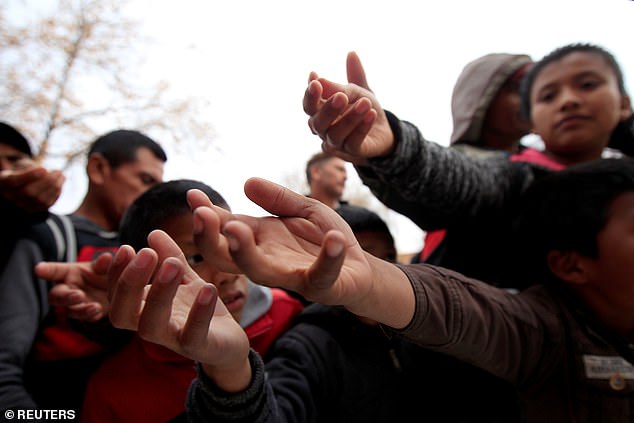 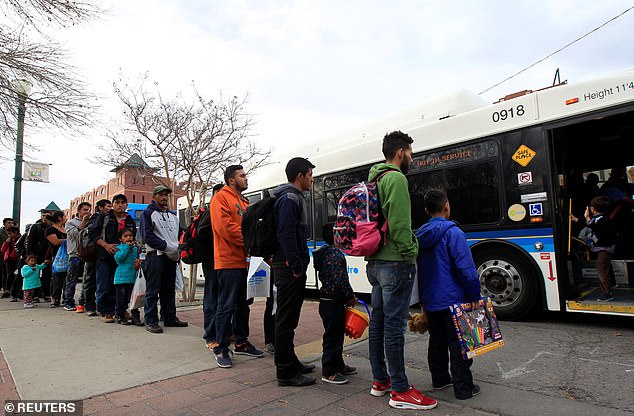 Central American migrants, who were dropped off at a bus station by U.S. Immigration and Customs Enforcement (ICE), wait to board a bus to take them to emergency shelters in El Paso, Texas, on Christmas Day, Tuesday

The released migrants, mostly from Guatemala, Honduras, and El Salvador, were found by asylum officers to have a credible fear of persecution if they were to be repatriated.

So they have been permitted to stay in the U.S. while pursuing the uphill legal battle of obtaining asylum.

ICE usually has coordinated with local groups, charities, and nonprofits to arrange the orderly handover of migrants so that they could be housed in shelters.

But the agency gave no explanation as to why it dumped scores of migrants on the streets of El Paso earlier this week without any food or shelter in 40-degree weather.

Generous Good Samaritans have stepped up and provided food to the migrants while local groups have arranged for temporarily shelter.

Because of the government shut down, ICE would not comment.

‘All of ICE’s public affairs officers are out of the office for the duration of the government shutdown,’ the agency said.

‘We are unable to respond to media queries during this period because we are prohibited by law from working.’ 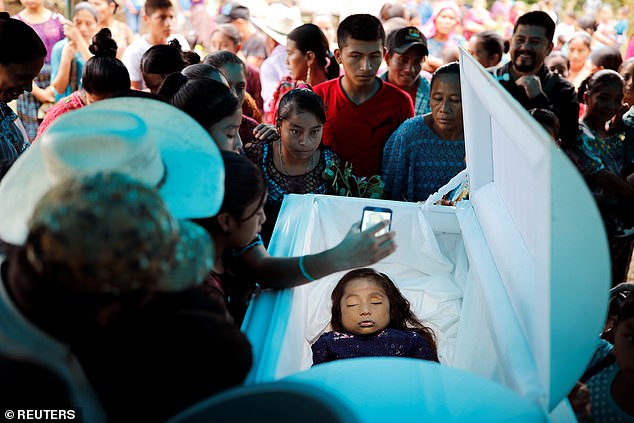 Customs and Border Protection said it would conduct medical check-ups on all migrant children in its custody after the death of two kids this month. Jakelin Caal, 7, is seen in a casket as friends and family attend her funeral in the Guatemalan village of San Antonio Secortez

‘ICE gave us a heads up about an hour or two ago that we were going to get 200 folks Downtown,’ Corbett told the El Paso Times. 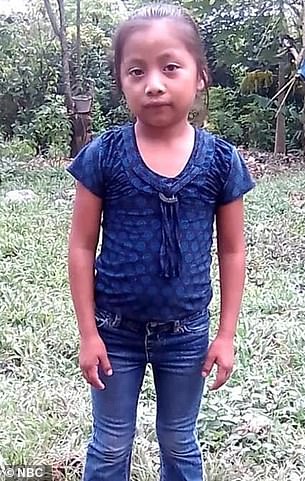 ‘The federal government has an obligation to assist and not just leave people out in the cold, which is what they did yesterday and what they did the day before when they left people at and around the Greyhound bus station and that is what they did in October. That is unacceptable. Simply ridding itself of migrants is not a solution,’ he told the Texas Tribune.

Federal law enforcement officials said the reason they no longer create temporary housing was because ‘it was too difficult,’ Escobar said.

‘If they are able to create tent cities to jail children, then they should absolutely be able to construct the same kind of facilities as they did in 2016 to assist the migrants,’ Escobar said.

‘The federal government needs to step up and dumping people out on the streets is not stepping up,’ Escobar said. 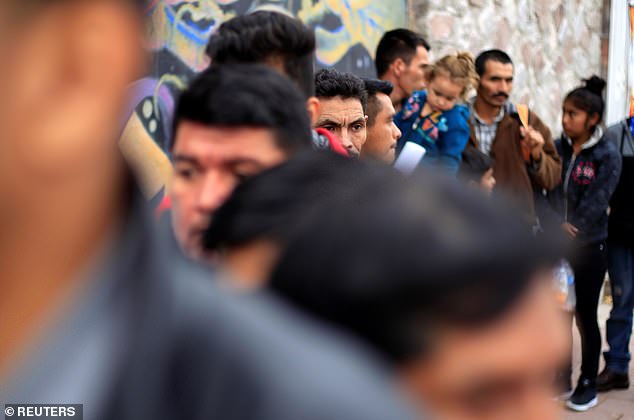 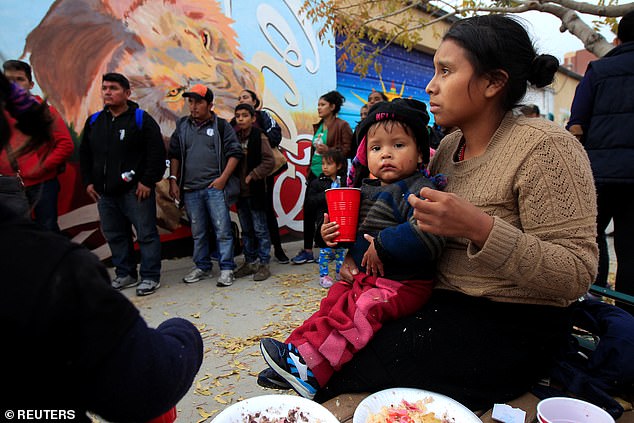 Some of the migrants described the difficulty of their journey from Central America, which included days of travel by foot with little to no food 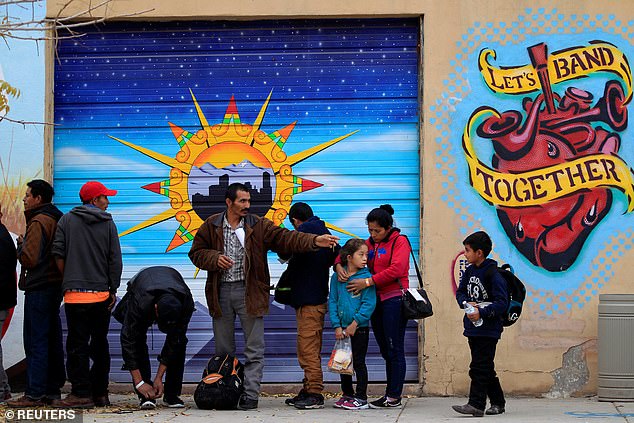 ICE dropped off the migrants without warning. In years past, it would coordinate with local officials so that shelter can be arranged 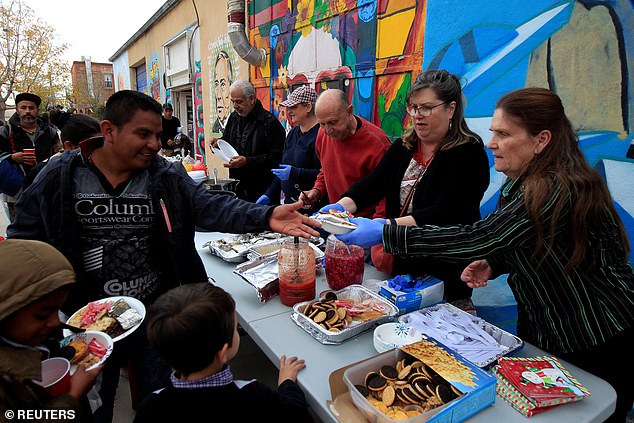 ‘Right now, we are trying to find them space for the night.

‘A place where they can sleep, make phone calls to their contacts or relatives in other parts of the country.

‘Most of these folks are on route to another part of the country.

‘They are not staying here in El Paso.

‘They want to go to their sponsor or family members in other parts of the country.

‘They just need a place for the night.’

The Hope Border Institute describes itself as an ‘independent grassroots community organization’ that advocates on behalf of migrants.

Some of the asylum seekers described the difficult journey they made from their native countries.

One woman, Juana Juan Diego, said she and her 1-year-old daughter, Dulce, traveled by foot for 20 days from Guatemala City. 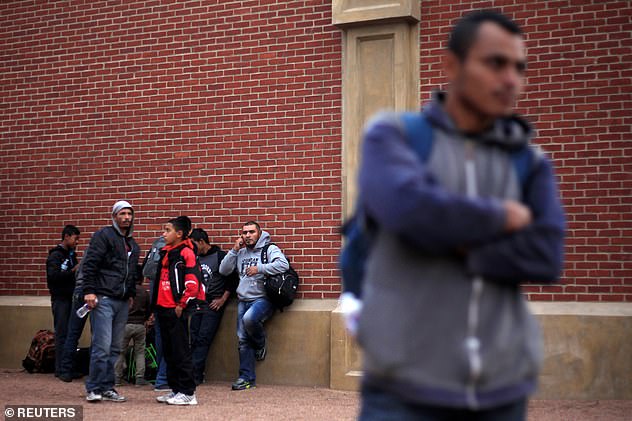 Most of the migrants will be in El Paso temporarily. They will eventually be housed with relatives while the government reviews their requests for asylum 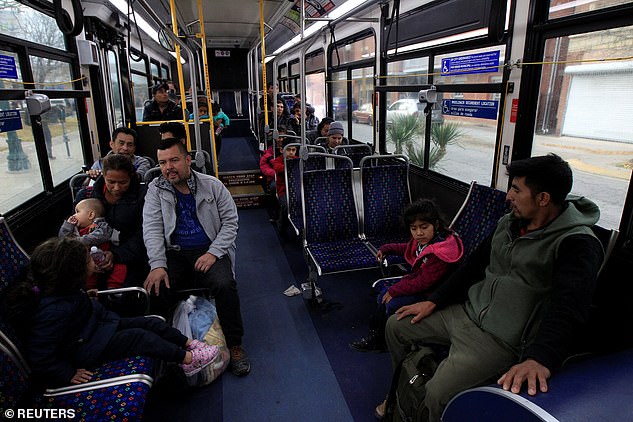 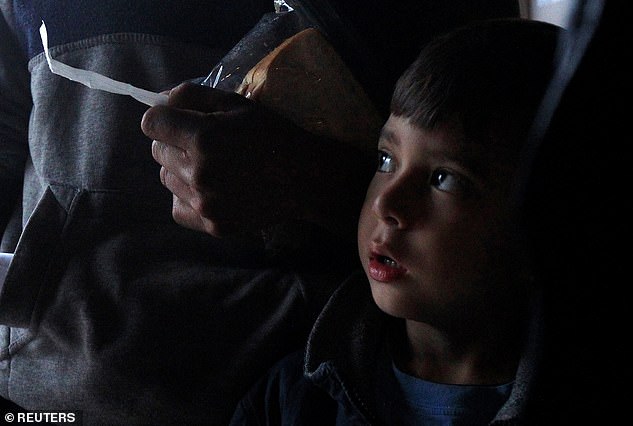 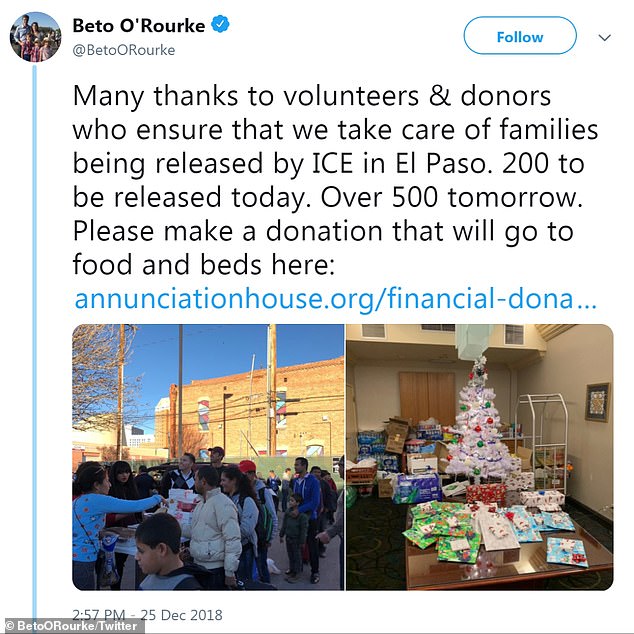 Beto O’Rourke, the Democratic Congressman, asked the public to make a donation to help care for the arriving migrants

Juan Diego said her daughter has been suffering from diarrhea and headaches after going days with little to no food.

‘It has been very difficult,’ she told the El Paso Times. She said she has come to America because of the lack of jobs in her country.

She said her final destination is Tennessee, where she will stay with relatives while her asylum case is pending.

Corbett said that the group of migrants has been checked and that no one is in need of immediate medical attention.

Hours earlier, U.S. immigration authorities said an eight-year-old boy from Guatemala has died in government custody, the second immigrant child to die in detention this month.

A Guatemalan official says he was told by the father of an 8-year-old boy who died in U.S. custody that the two had been traveling from their home in the Central American country to Tennessee, and that his son had been in ‘perfect health.’

The consul says he interviewed the father, 47-year-old Agustin Gomez, by telephone. 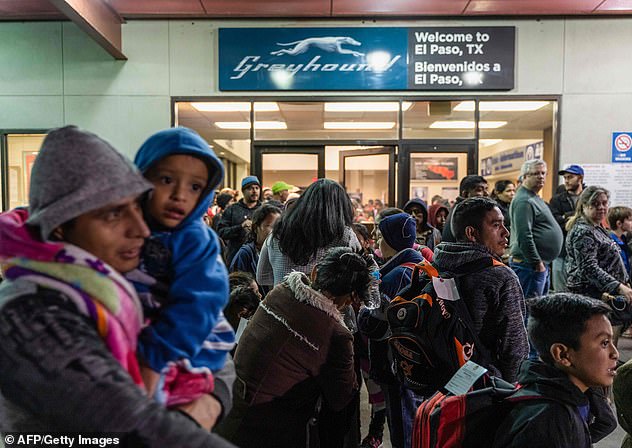 On Sunday, hundreds of migrants were dropped off at a Greyhound bus station 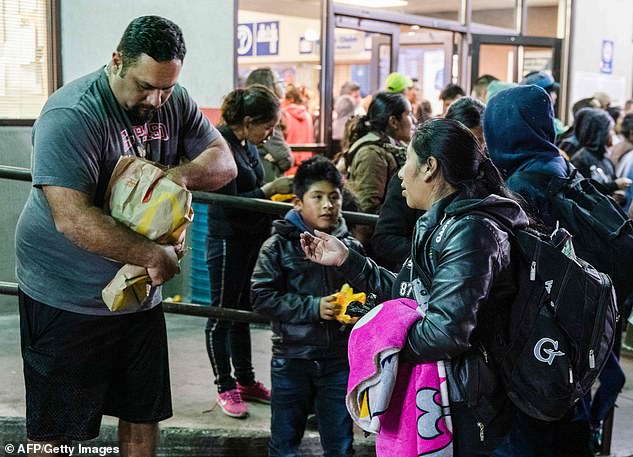 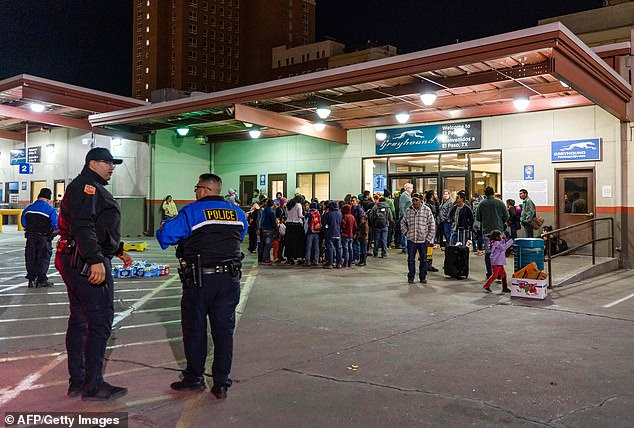 An additional 500 migrants are expected to be dropped off in El Paso in the coming days, according to immigration advocates 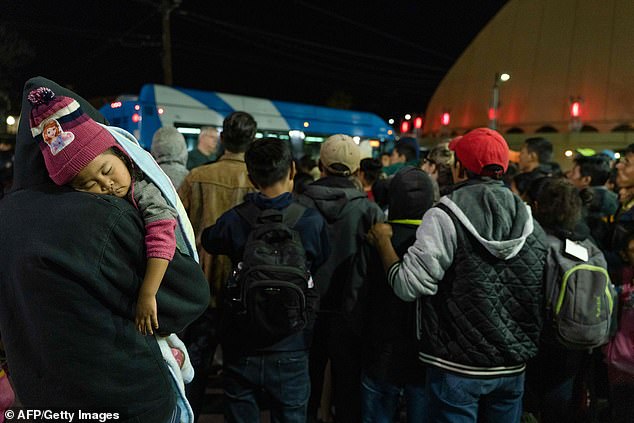 The group of around 200, mostly made up of Central Americans, were left without money, food and means of communication 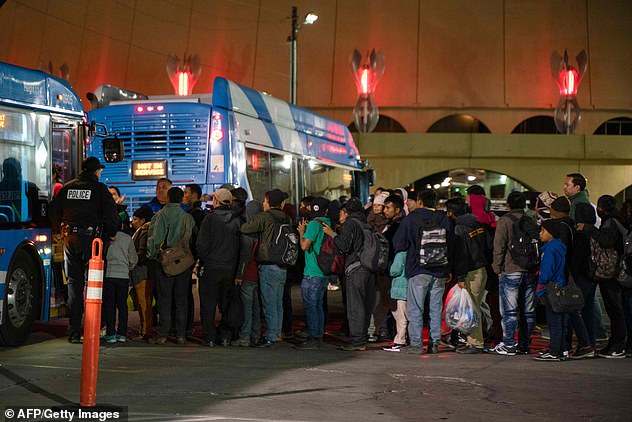 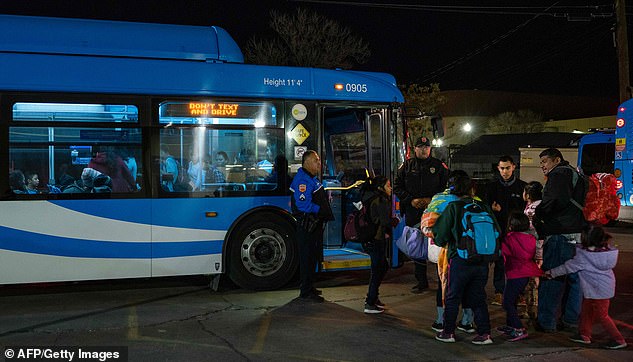 Annunciation House, a charity that has provided shelter to migrants, asked the public for donations in housing some 200 migrants who were dropped off by ICE at an El Paso bus station on Sunday and Monday 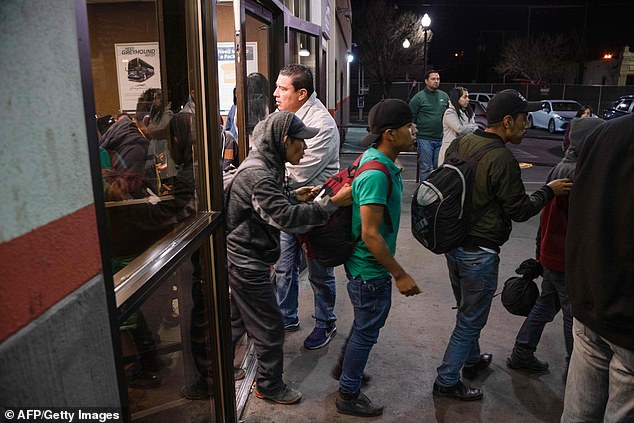 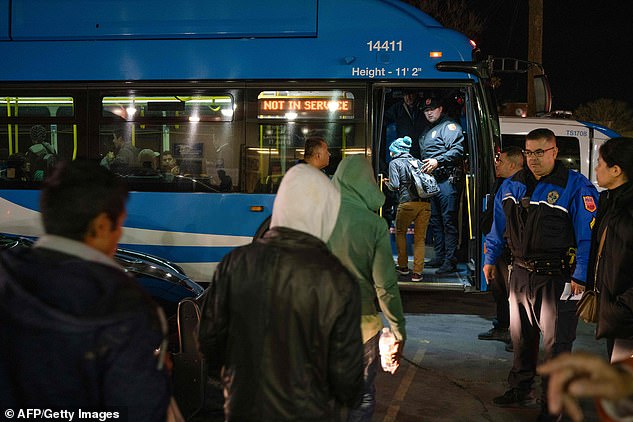 O’Rourke, who has emerged as a possible 2020 presidential contender after his near-upset of incumbent Texas Senator Ted Cruz this past November, said he was told by ICE that the unannounced releases were a mistake

CBP says the boy was taken Monday with his father to a hospital in Alamogordo, New Mexico, where he was diagnosed with a cold and a fever, and released.

The agency says the boy was returned to the hospital Monday evening with nausea and vomiting.

Earlier this month, a 7-year-old Guatemalan girl died while in custody of border authorities.

Annunciation House asked the public for donations in housing some 200 migrants who were dropped off by ICE at an El Paso bus station on Sunday and Monday.

Beto O’Rourke, the Democratic Congressman who represents the El Paso area, was seen at a park near the bus station handing out food.

O’Rourke, who has emerged as a possible 2020 presidential contender after his near-upset of incumbent Texas Senator Ted Cruz this past November, said he was told by ICE that the unannounced releases were a mistake.

‘I don’t think it was intentional. I think they made a mistake in not alerting the community.’ 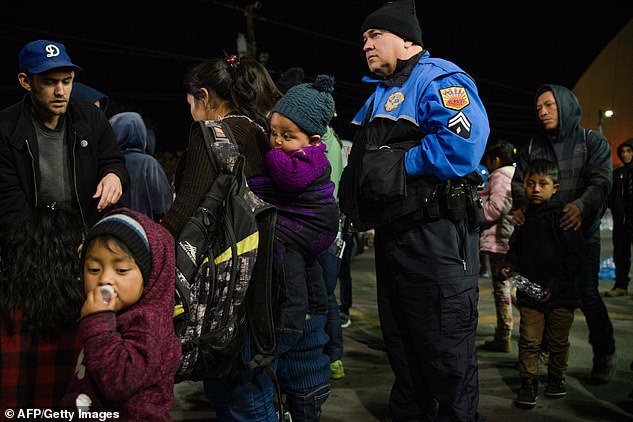 The group of migrants included many women and children who made the long journey to the U.S. 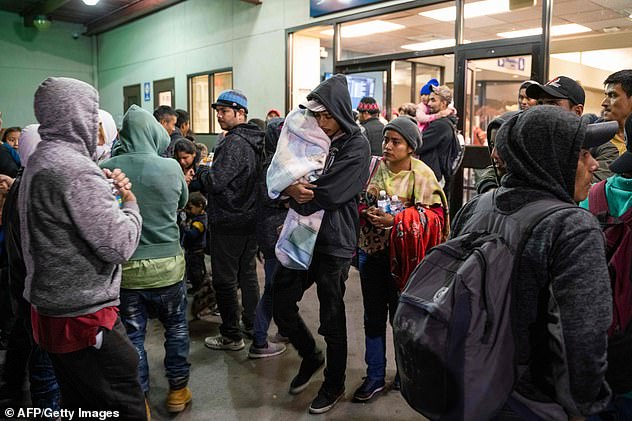 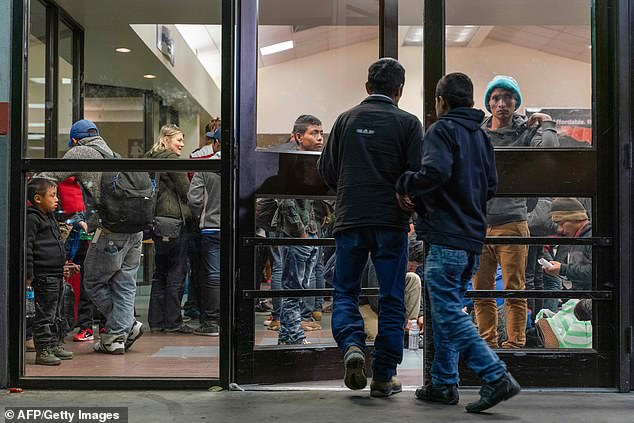 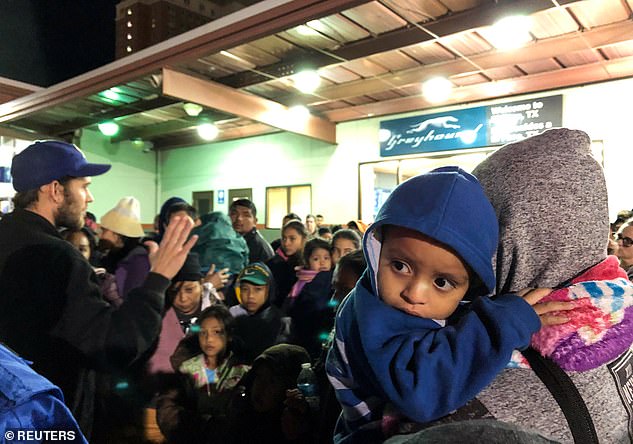 The agency typically coordinates with local shelters to make sure there is space for them to stay.

But U.S. Rep.-elect Veronica Escobar, O’Rourke’s successor, tells The Associated Press that ICE officials dropped people off at the bus station after Annunciation House said it didn’t have enough space.

‘I have a number of concerns,’ Escobar said Tuesday.

‘[Customs and Border Protection] back in 2016 used to create temporally holding facilities that were humane, safe and clean, so that migrants during times of a surge wouldn’t be left on the street.

‘Federal law enforcement has long collaborated with the Annunciation House, so they know exactly what the capacity is here in the community.’

ICE did not respond to a request for comment.