A wild brawl broke out between Floyd Mayweather and Jake Paul while they appeared at a press conference to promote an upcoming boxing match.

The boxing champion and YouTube star came to blows on Thursday at Hard Rock Stadium in Miami on Thursday, where Jake was on hand to help advertise his brother Logan Paul’s upcoming bout with Mayweather, which is scheduled to take place on June 6.

Mayweather and the Paul brothers traded verbal jabs in front of the cameras, with Mayweather calling the siblings ‘two fake fighters’.

‘The only thing that’s fake on this stage is Floyd’s f**king hairline,’ Logan shot back.

Logan, 26, and Jake, 24, only recently started competing in boxing after shooting to fame as YouTubers – but that didn’t stop them from facing off with undefeated pro-fighter Mayweather.

The brothers began mocking the 44-year-old for his age, before things quickly turned physical when Jake pulled off the boxing legend’s cap.

Several punches were thrown between Mayweather and Jake before members of their entourages joined in the melee.

Bodyguards were eventually forced to break up the fight, but not before Jake was left with a minor injury.

‘One of Floyd’s 30 bodyguards got a clean shot on me in the eye,’ Jake claimed after the incident.

A brawl has broken out between Floyd Mayweather and Jake Paul during a press conference in Miami, which was held to promote an upcoming boxing match 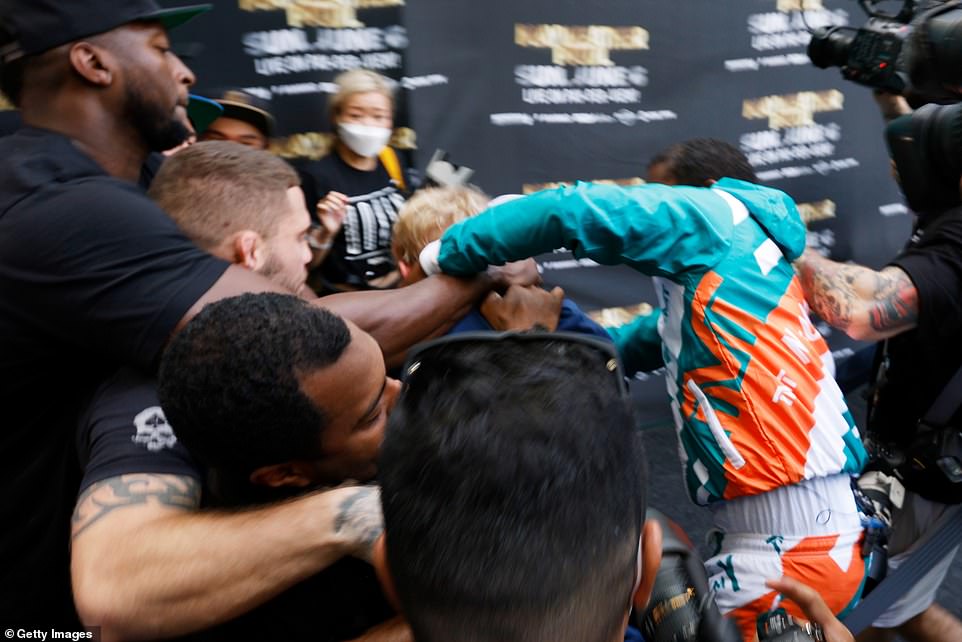 Things quickly turned physical, with punches thrown between Mayweather and Jake Paul as their entourages tried to intervene 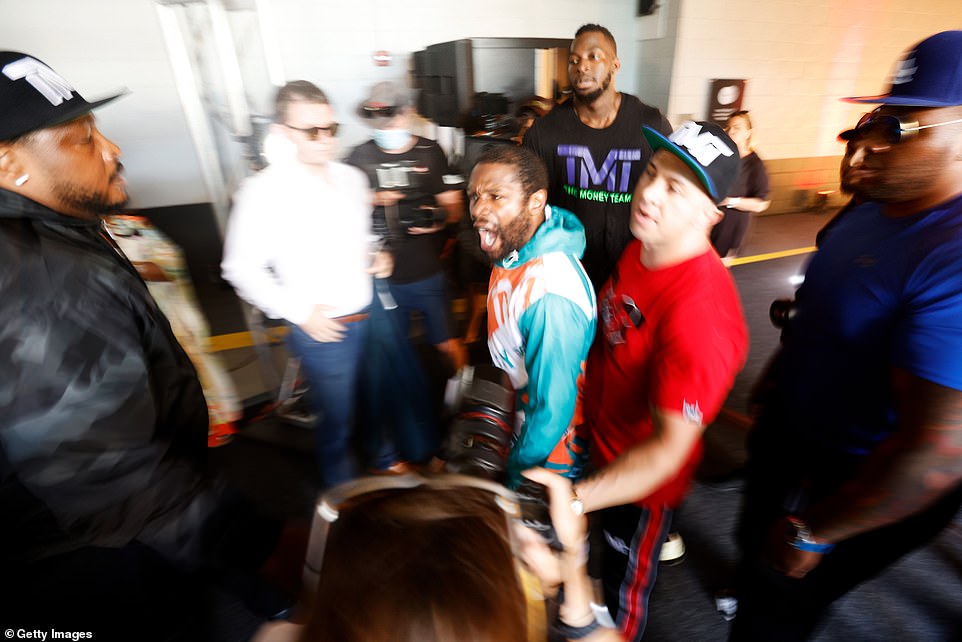 ‘I’ll kill you, mother f*****!’ Mayweather yelled as bodyguards were forced to break up the melee 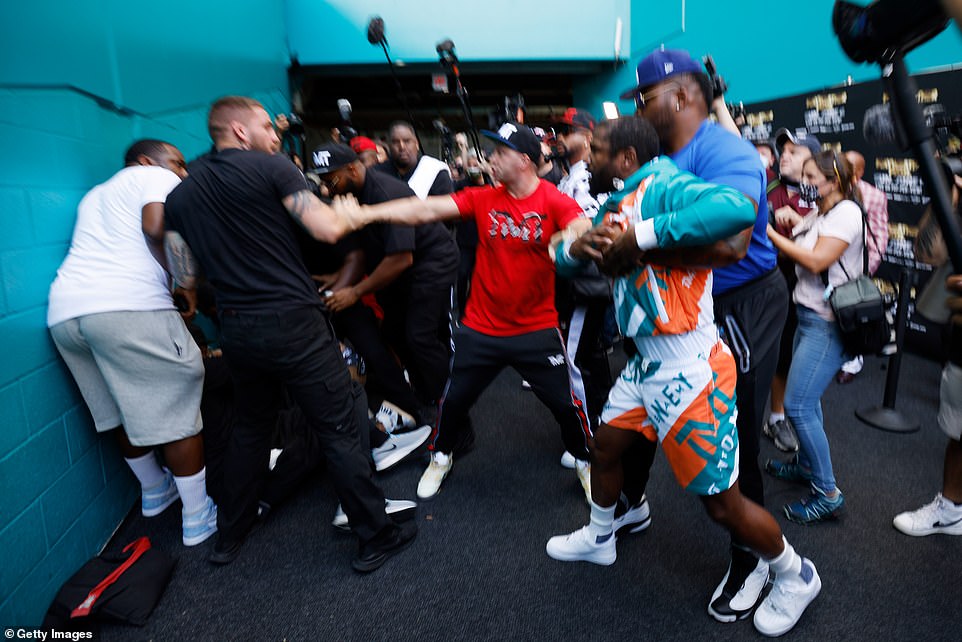 Boxing legend Mayweather, 44,  is set to step into the ring with Logan Paul next month. Tensions are already at boiling point 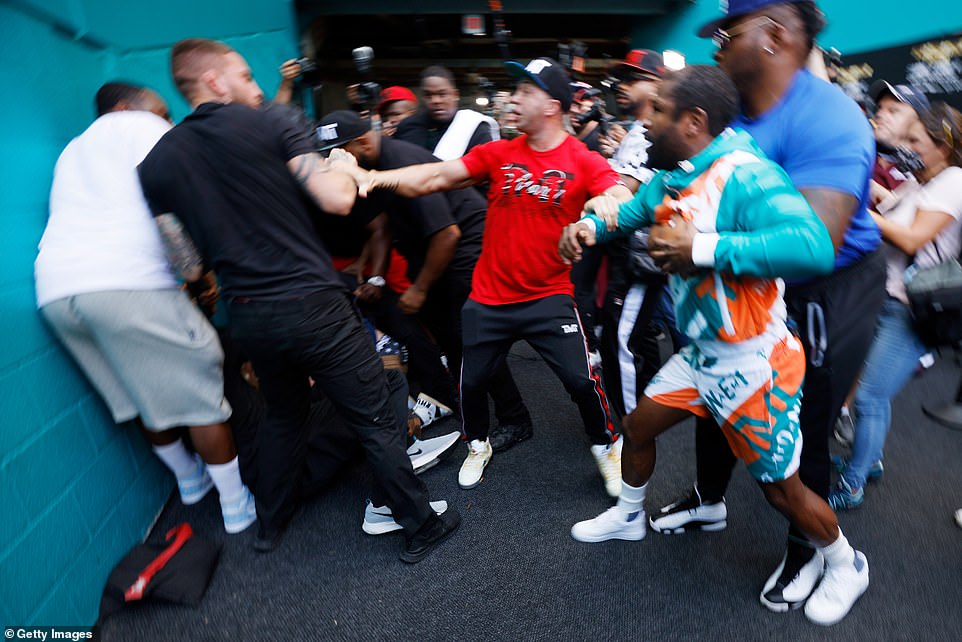 Jake Paul reportedly pulled off Mayweather’s hat, which caused the two rivals to come to blows 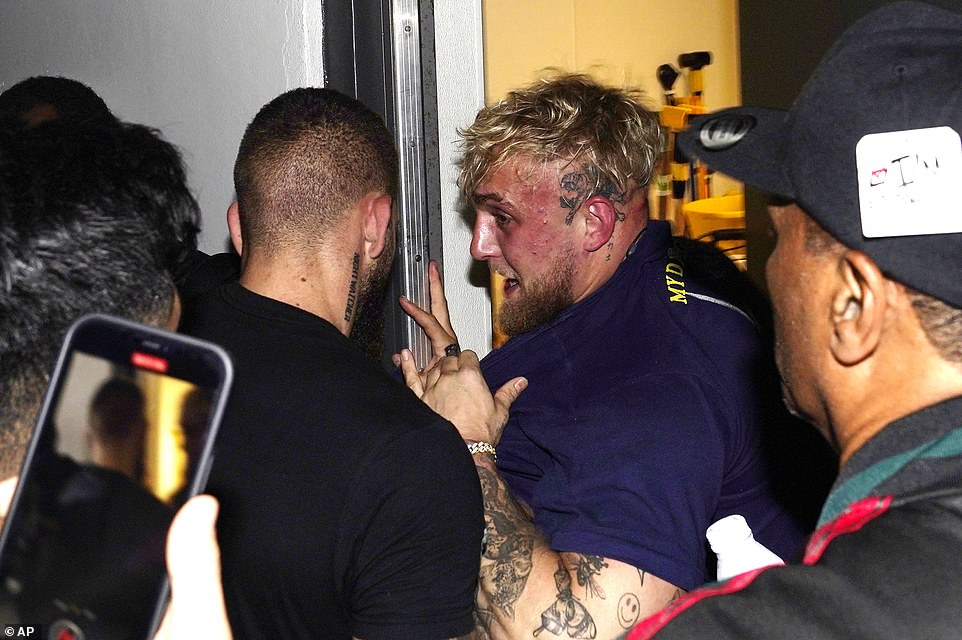 Afterward, Jake Paul claimed he had been given a black eye after being hit squarely in the face by one of Mayweather’s bodyguards

Mayweather boasts a 50-0 professional record in the ring, with his last professional fight taking place in 2017 when he beat UFC star Conor McGregor in a highly-publicized bout.

Logan Paul, on the other hand, has only competed in one professional fight, in which he lost to fellow YouTuber KSI.

But despite Mayweather’s pedigree, he is reportedly not taking any chances on going down to a YouTube star.

The boxing legend has reportedly told his 29-year-old girlfriend Anna Monroe to leave his multi-million dollar Vegas mansion as he knuckles down to prepare for his upcoming fight.

Mayweather asked  Monroe – lead dancer at his Las Vegas club Girl Collection – to get off the scene while he works off the ring rust and prepares to return from retirement once again, according to The Sun.

Logan is certainly not short on confidence, recently claiming he will be able to beat Mayweather in the bout.

Speaking on his podcast IMPAULSIVE last month, Logan was asked  by co-host George Janko to rate his chances of beating Mayweather out of ten.

‘Ten, yeah,’ Logan said. ‘I can see how that sounds ridiculous.

‘But guess what Georgey? My whole f***ing life is ridiculous. None of this s*** makes sense.

‘Everyone’s always told me my whole life you know, the things I’ve accomplished weren’t possible until I did them.

‘The fact that I even got a fight with Floyd Mayweather was impossible. Oh, then it happened. So, like man, I’ve heard it all. 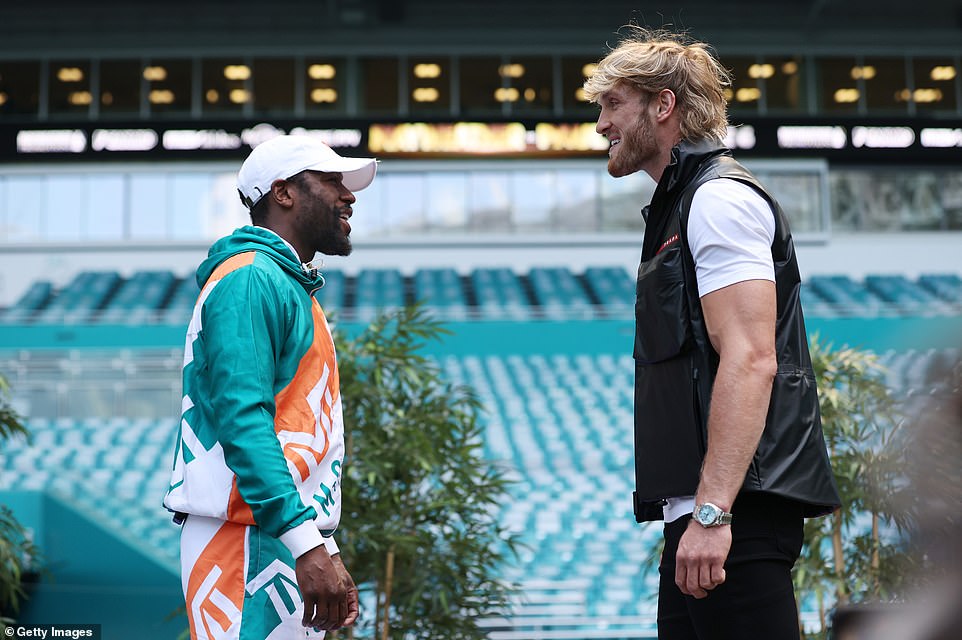 Before the clash: Mayweather and Logan Paul were pictured during a press call, where they initially traded verbal jabs 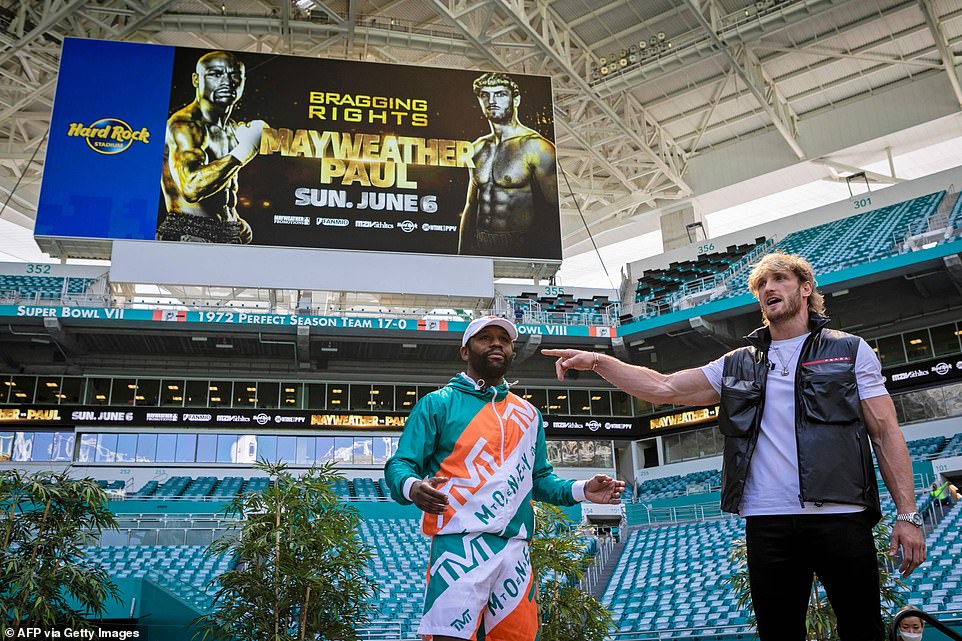 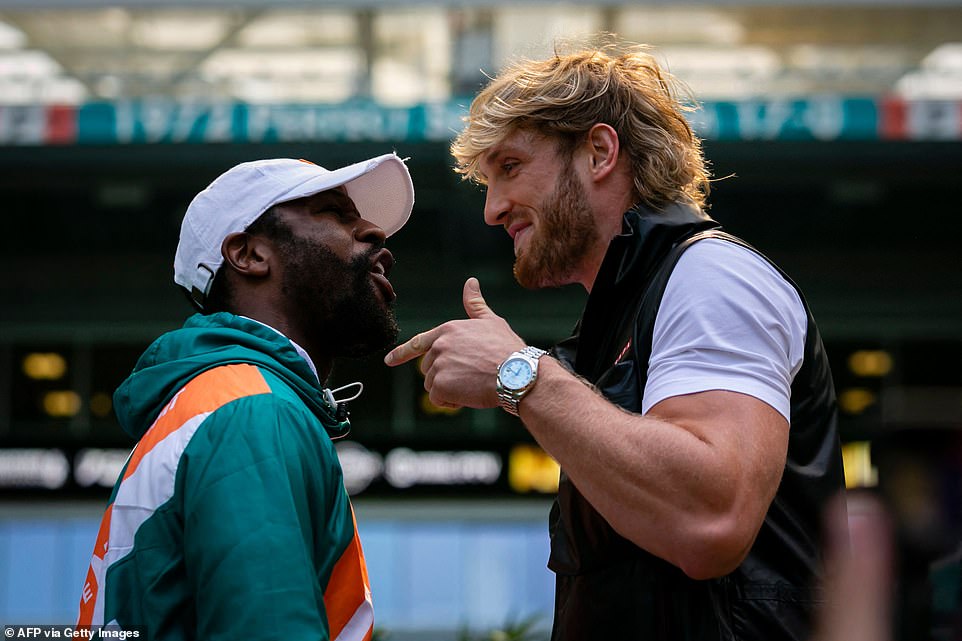 The two traded barbs are the press call, which took place in Miami on Thursday 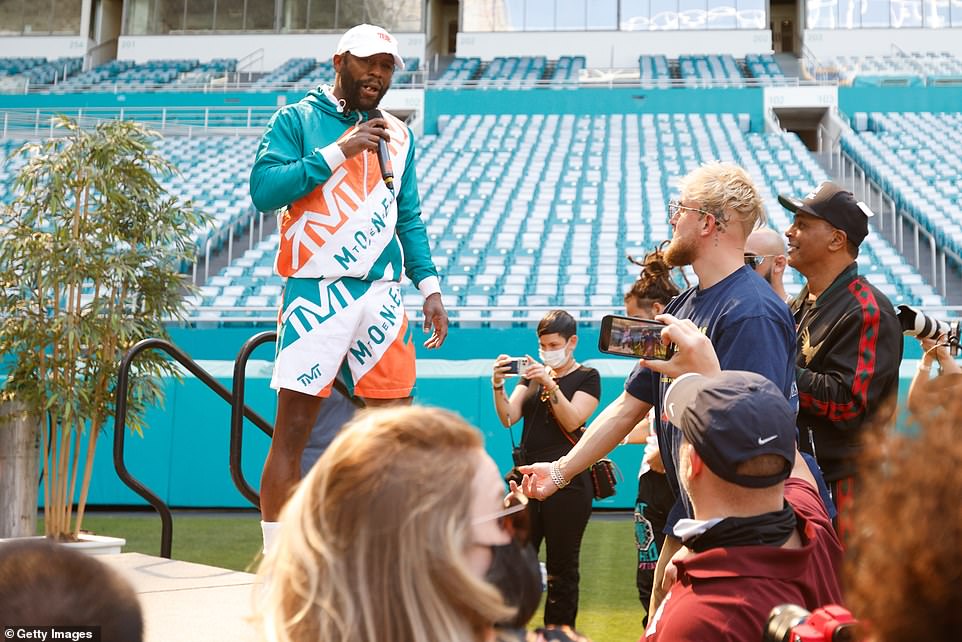 Jake Paul was on hand to support his brother, Logan, and began taunting Mayweather 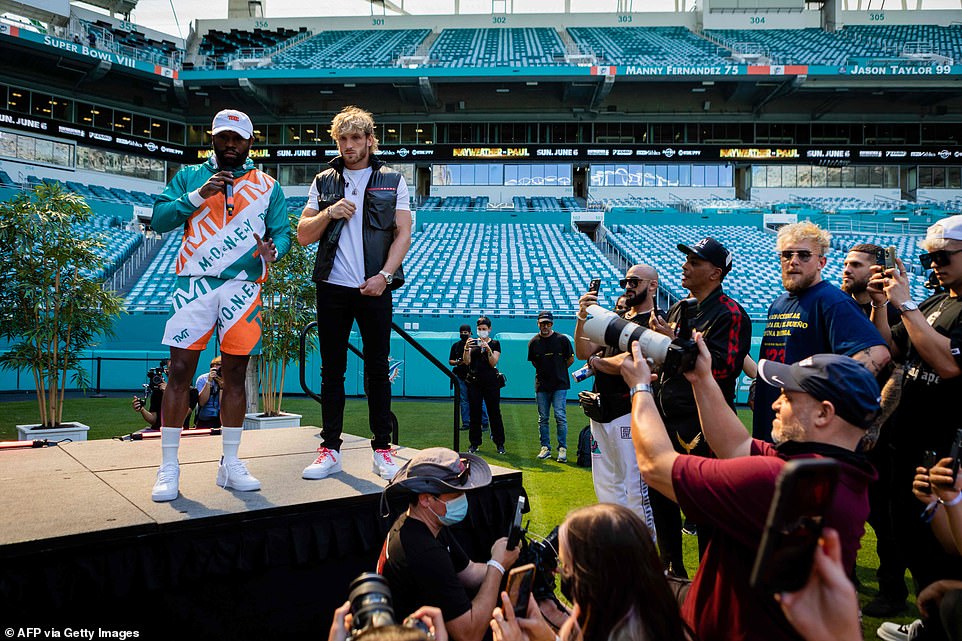 Logan (seen on stage) and Jake (seen at right)  are best known as YouTube stars and have only recently started competing in boxing. The duo began mocking 44-year-old Mayweather for his age during the press call 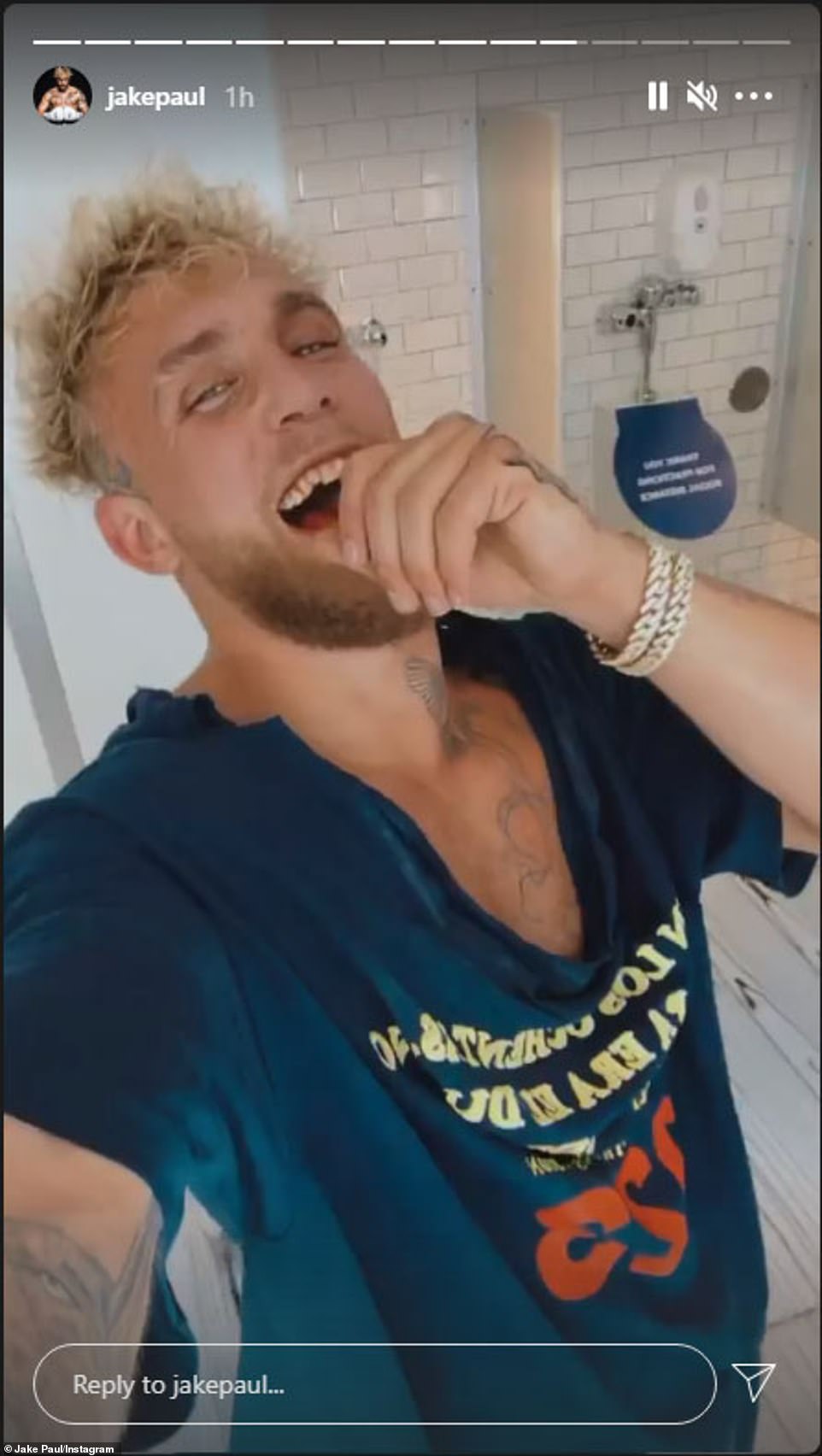