Thousands of teenagers are being left ‘zombified’ after using the illegal tranquiliser Xanax as a party drug or to help them cope with mental-health problems, new research suggests.

Xanax, a brand name of a class of drugs called benzodiazepine, is causing adolescents to suffer memory blackouts and personality changes, according to the largest survey of its kind.

Some 35 per cent of those aged between 13 and 24 take the drug recreationally or to help them cope with stress and depression when help is lacking in an over-stretched NHS, the research adds.

Bambos Charalambous, who is Labour MP for Enfield Southgate and has previously voiced concerns over Xanax, claims the tranquiliser is part of a subculture for those under 30, with older generations often never having heard of it.

Xanax is banned by the NHS but can be easily bought online from the US, where it is legal, creating a black market.

Benzodiazepine, also known as ‘benzos’, typically cause users to build up a drug tolerance within weeks, resulting in them craving ever larger doses to get the ‘hit’ they desire.

Withdrawal symptoms can include anxiety, panic attacks and even hallucinations.

Celebrities such as Michael Jackson and Justin Bieber have had Xanax habits.

In January, Police Scotland issued an alert after more than 20 Xanax-related deaths occurred, which it called a ‘national issue that also extends into other parts of the UK’.

WHAT CUT ILLEGAL XANAX BE CUT WITH?

Xanax bought illegally online as fake pills is often made of generic alprazolam powder and is sometimes cut with the opioid fentanyl.

Alprazolam is a minor tranquiliser used for the treatment of anxiety.

Fentanyl, which was behind the death of musician Prince, is a painkiller that can severely affect breathing at high doses.

‘I nearly stabbed a man on Xanax’

CHILDREN ARE BUYING THE ANTI-ANXIETY DRUG XANAX ON SOCIAL MEDIA

Children as young as 13 are illegally buying the anti-anxiety medication Xanax on social media sites such Instagram, Facebook, and Snapchat, a charity warned in February 2018.

One study participant, out of the 85,000 who took part in the research conducted by the online magazine Vice, said they had practically lost a friend as a result of their drug addiction, saying ‘it’s up there with heroin’.

Another said the tranquiliser is the most dangerous substance they have encountered.

Some claim they broke off relationships or put deposits down on houses while under the drug’s influence and did not realise until they were sober.

One user even said: ‘I nearly stabbed a man on Xanax.

‘Xanax gives you the confidence to do absolutely anything.’

‘Young people are playing Russian roulette with their lives’

Speaking of the drug’s use among young people, Mr Charalambous told The Times: ‘There is a subculture for people under 25 or 30.

‘It’s part of their vocabulary but older people have never heard of it.’

Mr Charalambous adds many young people think the drug is ‘cool’ or wrongly believe they can safely self-medicate their mental-health disorders due to Xanax being available in the US.

Mr Charalambous went on to say many are driven to tranquiliser use after being forced to wait months for a medical appointment for conditions such as depression or anxiety.

According to Harry Shapiro, director of the Drug-Wise information service, health ministers cannot wait to see if Xanax is just a craze, with teenagers putting their lives at risk by combining such drugs, of unknown strength, with alcohol.

He adds adolescents may assume buying drugs online is safer than on the streets, however, many are cut with substances such as the opioid fentanyl.

According to Barry Haslam, a drug safety campaigner: ‘Young people ingesting Xanax are playing Russian roulette with their lives.’ 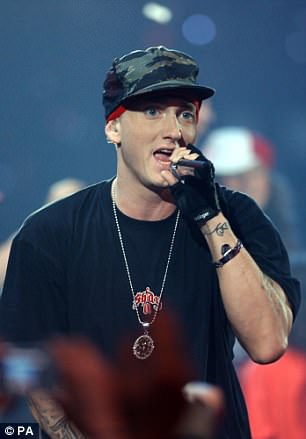 Popular rap artists like Eminem are fueling tranquiliser use, an investigation suggests

This comes after research released earlier this month suggested popular rap artists like Eminem are fueling illegal tranquiliser use.

Eminem’s 2010 hit ‘I’m have a relapse’ contains the lyrics: ‘I get these panic attacks, pop a Xanax, relax’.

In Drake’s hit ‘Two birds one stone’ he raps about the actor Kid Cudi’s, his nemesis, drug use, saying: ‘You stay xanned [Xanax] and perked [Percocet] up so when reality set in you don’t gotta face it’.

Rapper Lil Peep, who is believed to have accidentally overdosed on Fentanyl and Xanax last November, also sang: ‘I found some Xanax in my bed, I took that s***, went back to sleep’ in his song ‘Praying to the Sky’.

More than 1.5 million counterfeit Xanax pills were sold in the UK between 2015 and 2017, according to a BBC Three analysis.

The BBC investigation suggested that two online sellers, who go under the names Hulked Benzo Boss and UKBenzos, flooded the market, pushing packs of 1,000 pills alongside explanations for dealers on how to make profits from drug sales.