I’m a Celebrity stars were airlifted to the scene of what is expected to be their most fearsome challenge today.

Pop producer Naughty Boy and former BBC Breakfast TV presenter Louise Minchin were among a group of celebs who were flown by helicopter to a rig constructed for the show and escorted by presenters Ant and Dec.

The presenters themselves, appeared to be enjoying the view from the scaffolding.

Ant, wearing a long coat, jeans and boots, taking out his mobile phone and snapping pictures of the drop while laughing. Dec was beaming as he chatted to Naughty Boy and pointed around the scaffolding.

Help! I’m a Celebrity stars were airlifted to the scene of what is expected to be their most fearsome challenge today

The celebs were taken from Gwrych Castle, to secluded field near Caernarfon , a distance of around 40 miles.

Teams of cameraman had batteries of lights installed on top of the scaffolding as for the stars walked around talking to Ant and Dec.

The fact that they risked adding carbon emissions and polluting the air with their means of transport only a week after the government-led green summit COP26 seemed lost on show producers.

One observer said: ‘It was a sunny morning and you can get quite easily from the castle where they will be based, to the set which has been built.

‘They could’ve easily taken an electric car all together and it would have taken them about an hour. But I suppose they want to keep the celebs away from prying eyes and away from any risk of Covid infection.’ 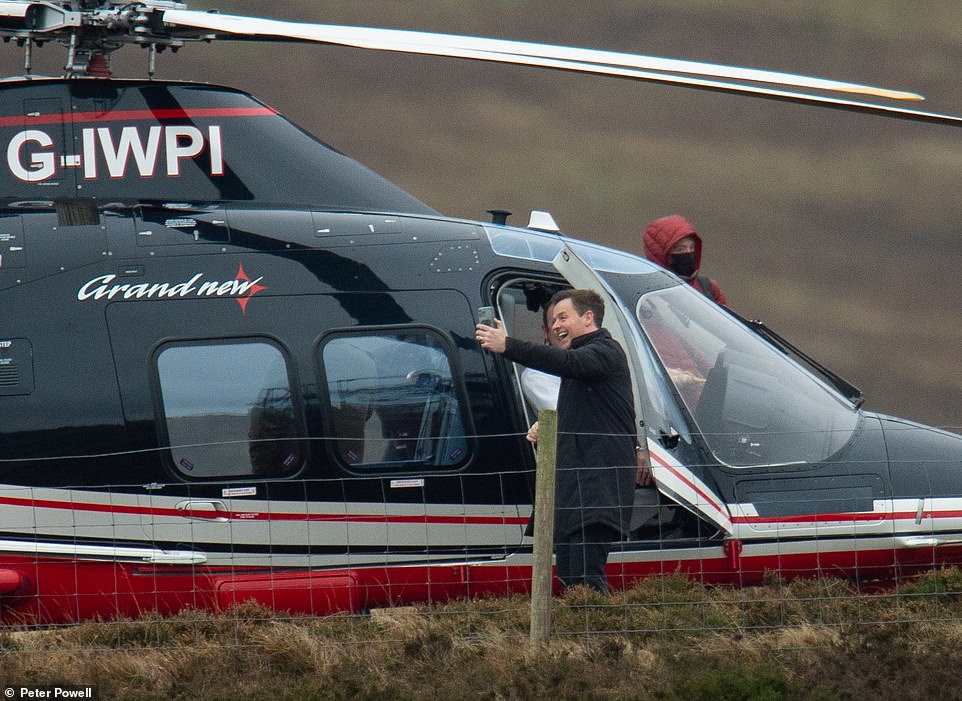 Snap happy: Dec was snapping selfies after departing the helicopter 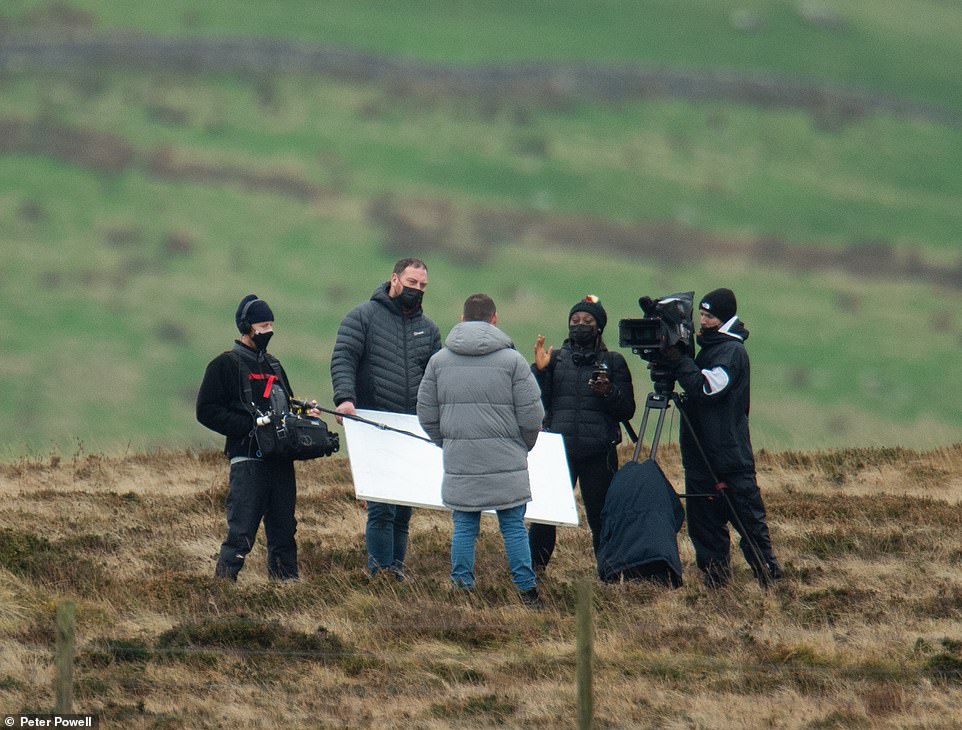 In the afternoon, the weather turned, with rain and mist descending forcing filming to halt.

All participants in the show, which is one of ITV’s biggest hits annually, have been in isolation for the past fortnight.

Today’s show producers filmed the celebs landing in helicopters and then ‘walking the plank’ over the giant scaffolding which has been erected in a quarry along the North Wales coast near Caernarfon.

The scaffolding has been erected at Alexandra Quarry near Penyffridd, In order to force them to ‘Walk The Plank’ during a task. It is above the disused quarry, with a terrifying drop of hundreds of feet. 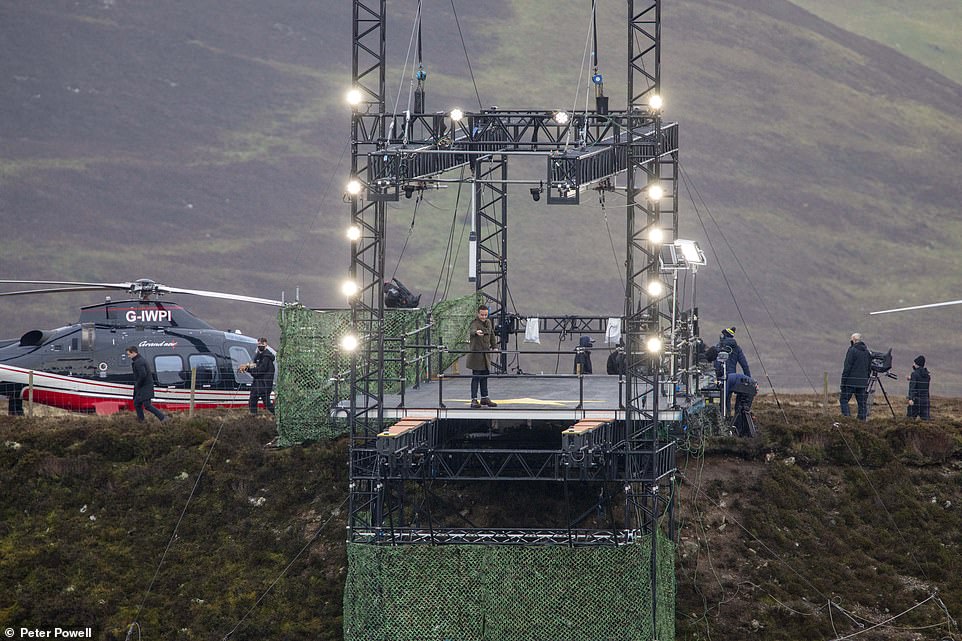 Here come the boys: Ant, wearing a long coat, jeans and boots, taking out his mobile phone and snapping pictures of the drop while laughing. Dec was beaming as he chatted to Naughty Boy and pointed around the scaffolding

Ant and Dec, wrapped up against the cold and rain, showed four of the show stars around the scaffolding before filming began.

A similar plank challenge was executed in Australia in the 2019 series, while last year, stars abseiled down a cliff – leading to a memorable moment in which DJ Jordan North vomited in fear.

The latest images come after it was reported that show bosses were making new additions to Gwrych Castle including a dungeon and a second dingy camp.

ITV are said to be creating a new jail called The Clink on the grounds of the estate in North Wales where celebrities will be sent if they misbehave.

But before the show officially begins on Sunday evening, producers will have to deal with a hail of criticism from animals rights campaigners. 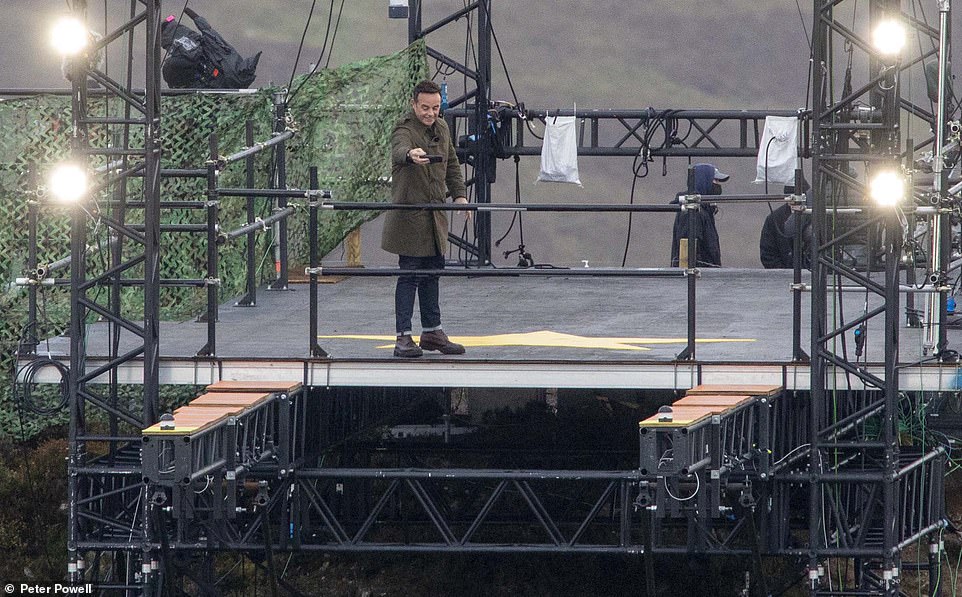 Eek! Teams of cameraman had batteries of lights installed on top of the scaffolding as for the stars walked around talking to Ant and Dec

Critics of the show took to Twitter to lambast it for using live animals for entertainment.

Animal rights campaigners called for viewers to boycott the series and turn to other programs.

A PETA spokeswoman said: ‘While there’s a new line-up of celebs on the bill, viewers can expect the same cruel and tacky animal stunts we’ve seen year after year on I’m a Celeb.

‘Despite knowing the suffering, discomfort, and fear that the unwilling animal participants endure during the show’s idiotic challenges, ITV seems perfectly happy to continue to send the dangerous message that abusing animals is acceptable or even entertaining. 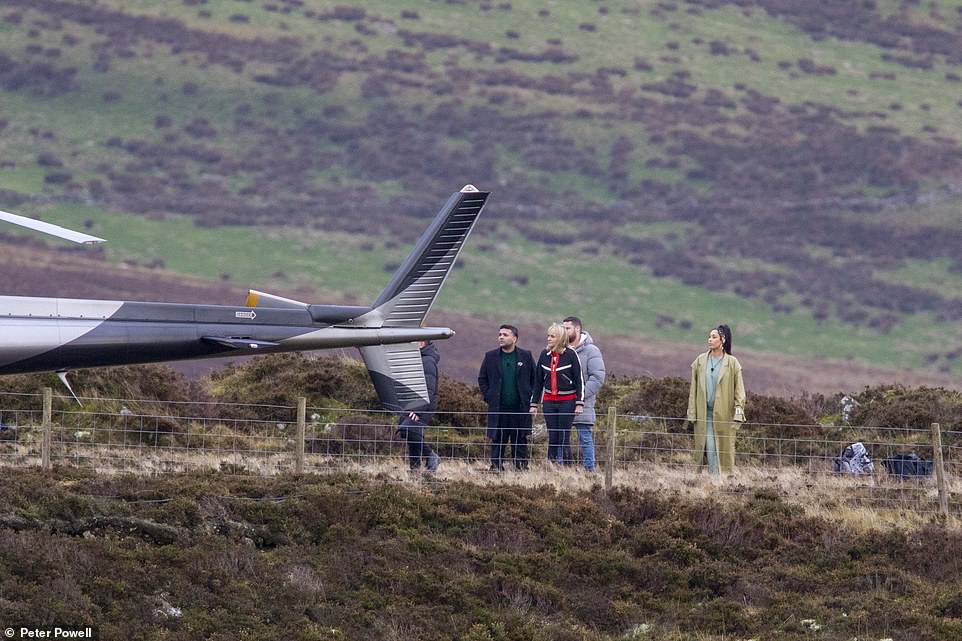 Oh dear: The stars looked apprehensive as they prepared for the trial

‘ But it isn’t funny to see shy snakes shrink away from celebrities’ shrieks or cockroaches confined to an inescapable chamber with a flailing human.

‘ Treating animals like inanimate props for puerile pranks ignores all we’ve learned about the other remarkable beings we share the world with.

‘ PETA urges viewers to change the channel on this circus until producers get animals out of there.’ 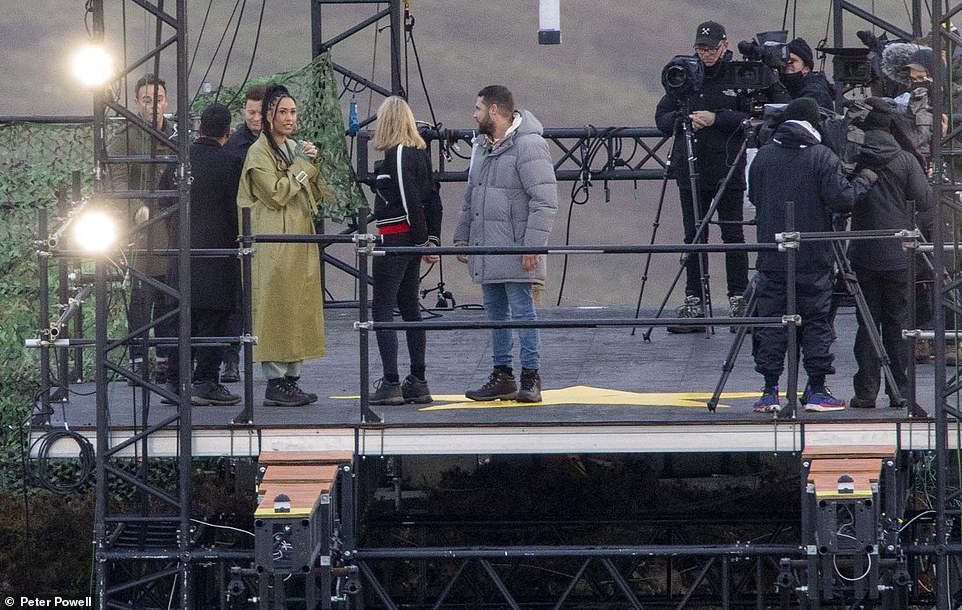 Uh oh: The stars were getting ready for the  Walk The Plank challenge