Tens of thousands of coronavirus deaths in Britain may have been avoided if officials imposed the lockdown a fortnight earlier, a study has claimed.

University of Edinburgh researchers said at least 2,000 lives would have been saved in Scotland, if the measures were brought in on March 9 instead of March 23.

The official COVID-19 death toll in Scotland is 1,862, but the true number of victims is more than 2,800 due to a lag in the way deaths are recorded.

Rowland Kao, professor of epidemiology and lead author of the paper, said there had ‘definitely’ been enough information about the coming pandemic in mid-February.

He demanded to know why lockdown was not imposed sooner, saying he hoped the country was ‘following the right science’.

Professor Kao told MailOnline that if the whole of Britain was forced to stay at home a fortnight earlier it would have a ‘similar’ effect on the death toll.

Applying the 80 per cent reduction to Britain’s 32,490 fatalities suggests almost 26,000 deaths could have been prevented.

The UK did not ban mass gatherings until March 16 or go into lockdown until March 23, despite knowing the virus was spreading between Britons since at least February.

If lockdown was imposed a fortnight earlier, coronavirus deaths in Ayrshire and Arran would’ve been almost halved (shown as dashed lines), but the effect in the Borders would have been negligible. True COVID-19 deaths are shown in red

In Glasgow and The Highlands, an early lockdown would’ve greatly reduced the number of deaths 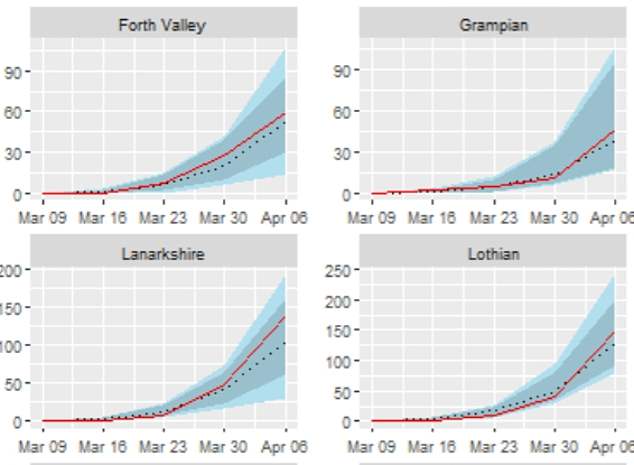 In Forth Valley, Grampian, Lanarkshire and Lothian, the effects would not have been as drastic, but hundreds of lives would have been saved

Professor Kao and colleagues developed a mathematical model which simulated the outbreak north of the border.

It looked at the effect of lockdown on people’s movements, the reproduction ‘R’ value (the average number of people an infected person infects) and deaths.

The team simulated what would have happened to the spread of the virus if the nationwide measures were brought in on March 9.

Lockdown could be needlessly prolonged because of ministers’ obsession with ‘irrelevant’ R-value, MPs and scientists warn

Lockdown could be needlessly prolonged because of the Government’s obsession with bringing the ‘irrelevant’ R value down, MPs and scientists have warned.

Ministers are relying on the reproductive ‘R’ figure – the average number of people a coronavirus patient infects – to tell them when it will be safe to unlock the country.

Prime Minister Boris Johnson has insisted that keeping the R below 1 is the most important of five tests that must be passed before returning to normal life.

But ministers have been advised against the strategy because the infection rate measure has been skewed upwards by the escalating crisis in care homes.

Experts believe the R is hovering at a stable 0.5 in the community, because people are no longer having regular face-to-face contact with others.

But the ongoing crisis tearing through care homes has driven up the rate to 0.9 in some areas, which may be spooking the Government, according to one senior MP.

If the R figure is above one, it means the disease is continuing to spread rather than gradually fading away.

The R was estimated to be as high as 4 at the start of Britain’s outbreak, but is now between 0.5 and 0.9 nationally.

Officials have teased data revealing more accurate transmission rates in the community in different parts of the country – but they’ve refused to make it public.

Greg Clark MP, the chairman of the science and technology select committee, said the R value was ‘irrelevant’ and slammed the Government’s obsession with it.

He told The Telegraph: ‘There’s a concern that measures that could safely release people back into the community are not being taken because of an irrelevant ‘R’ number determined by cases in care homes and hospitals.

‘It’s not clear how the ‘R rate in care homes is relevant to the ‘R’ rates of people going about their daily business. If people are in a care home, by definition they are not going out into the community and infecting other people.

‘But the single ‘R’ number given out by the Government has been skewed. It cannot reflect the reality outside, and we need to know whether crucial public policy decisions are being based on this number.’

Mr Clark also accused the Government of not being transparent by refusing to release data showing the R rate in different parts of the UK.

Epidemiologist Mark Woolhouse, a professor at the University of Edinburgh and an adviser to Tony Blair’s Government during the foot and mouth outbreak in 2001, described the R as a ‘very, very crude number’ which was too general to use by itself to decide on policy.

The model predicted the death toll would have been around 577 in Scotland, almost 80 per cent less than the 2,795 which have occurred already.

‘We input information on commuting movements, using Google mobility data, to try to get an understanding of how social restrictions effect spread.

‘Not moving so far away from one’s home is one of the big impacts of what lockdown is doing.

‘We also observed the pattern of the reproduction number, and seen a three-to-four fold reduction since lockdown.

‘If you take the effects lockdown has had on movement and the R value and apply it two weeks earlier, you notice that much less deaths would have occurred. We applied these curves across 14 health boards in Scotland.’

Professor Kao said if the UK as a whole imposed the lockdown on March 9 ‘you would expect a similar effect to the one seen in our research on Scotland.’

Commenting on the findings, Paul Hunter, a professor of medicine at the University of East Anglia, told MailOnline: ‘I doubt you would find anybody to disagree with that.

‘If the UK had done what it eventually had to do two weeks early several thousand deaths would undoubted have been saved and we would almost certainly be in a much better position now with cases being a lot lower.

‘And maybe we would be returning to normal rather more quickly. But things are always a lot more clear with hindsight.’

The Scottish Government’s scientific advisers would have known that a major outbreak was imminent in February, according to Professor Kao.

He added: ‘I would say it was very clear very early on how serious this outbreak was. They [ministers] were probably aware of the trade-offs of lockdown at the time.

‘There should be transparency in how decisions were made – we need to know if we were listening to the right science.

‘What delayed the lockdown, was it really about science or other things? It may have been concern about the economic impact of lockdown, or a lack of preparedness that delayed the decision.’

The University of Edinburgh research has not yet been published in a scientific journal or scrutinised by other scientists.

It comes after NHS England data revealed University Hospitals Birmingham was the worst-hit trust in the country during the outbreak.

Every major hospital trust has now recorded at least one victim of COVID-19 and some have been hit harder than others.

The 10 worst-affected hospital trusts, in London, Birmingham, Derby and Manchester, account for 4,808 fatalities.

And there are stark geographical trends, too, showing COVID-19 as a disease of cities – 11 of the 20 worst affected hospitals have been in the capital, along with, two in Birmingham, two in Manchester and others in Liverpool, Leeds and Sunderland.

All major NHS hospital trusts except children’s hospitals have now recorded victims of the disease, which has spread to every corner of Britain. 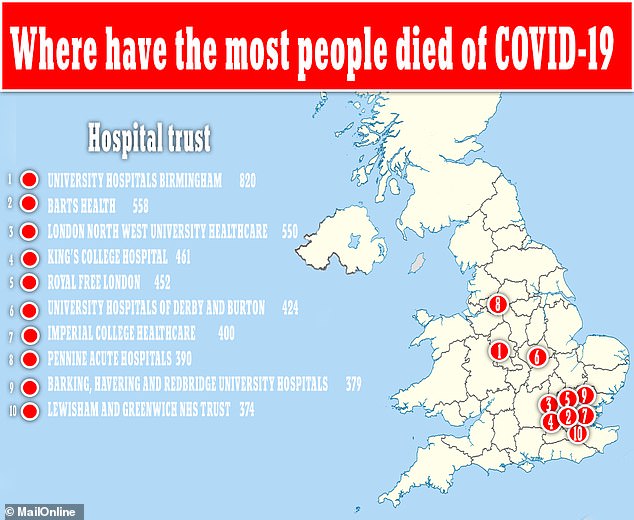 The 820 people who have died at the hospitals in Birmingham make up 3.5 per cent of the 23,359 confirmed to have succumbed to the virus in England’s hospitals so far.

The death toll there is 47 per cent higher than the next worst affected hospital, Barts Health Trust in central London, where 558 people have died.

Six other hospital trusts in London fill out the majority of the 10 hospitals with the most victims, according to NHS England data.

The others were University Hospitals of Derby and Burton (424) and Pennine Acute Hospitals in Manchester (390).

Scientists have said since the virus started circulating that the way it spreads means people are more at risk if they live in cities and densely populated areas.

The coronavirus is most likely to spread in cities because people live closer together than in the countryside, and are more likely to come close to large numbers of strangers and to touch surfaces such as handrails or door handles that have been contaminated.

People in cities are also more likely to rely on public transport where they may be exposed to the virus.