Reham Khan, 44, was married to Imran Khan for a year

The former wife of Imran Khan today said his hopes of becoming Pakistan prime minister were in tatters after those ‘cringeworthy’ photos of his third wedding.

Reham Khan said the pictures of his new wife covered from head to toe in full veil shows how out of touch the former cricketer is with modern Pakistan.

Calling the wedding snaps ‘political suicide’, she told MailOnline: ‘To have a woman veiled head to toe, he has alienated a lot of people. It has not gone down well, four months before the Pakistan election this is political suicide.’

Mrs Khan, 44, said the former globetrotting playboy cricketer had portrayed his new wife that way in a PR stunt to shift his image from ‘Soho to Sufism.’

‘This kind of veil is uncommon. I don’t want to be rude, I was a bit miffed. It is cringeworthy. 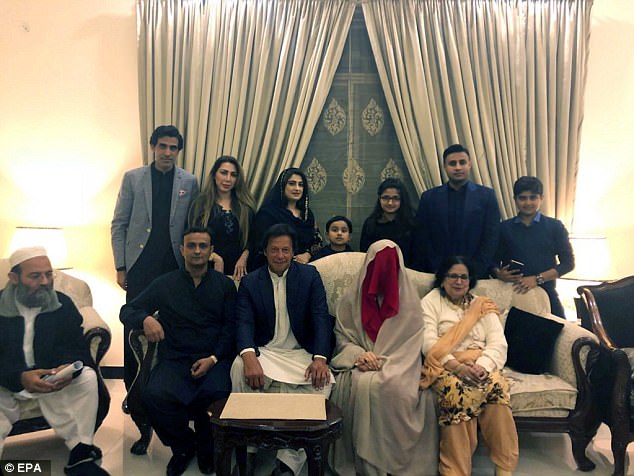 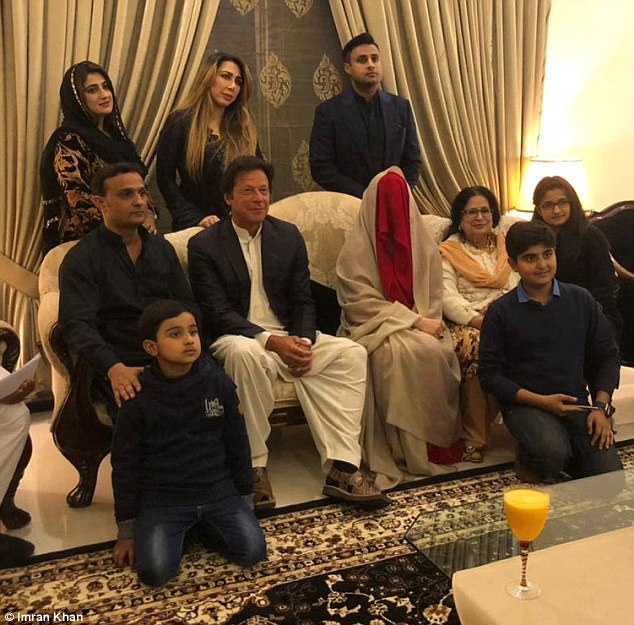 Imran Khan’s third wedding photo with his new wife covering her face was ‘political suicide’ – and shows how out of touch he is in a modern Pakistan, his former wife told MailOnline

She said he had virtually ended his career after claiming that he would not make any decisions without his new wife, faith healer Bushra Wattoo – proving himself to be disconnected with people in Pakistan.

Mrs Khan, speaking in London, said she knew her former husband was getting close to divorced mother-of-five Ms Wattoo during their marriage, but that wasn’t why the relationship ended abruptly in divorce in 2015. 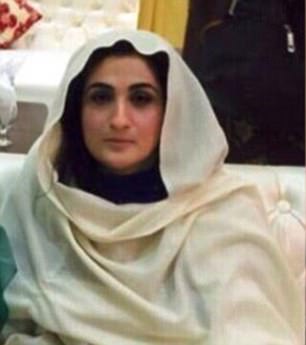 She said the former cricketer had been ‘untruthful’ about the date that he married spiritual healer Ms Wattoo, claiming that they tied the knot on New Year’s Day and only confirmed it last week.

She said: ‘Imran was in contact with Bushra three years ago when I was his wife and he is not the truthful man. I knew they married on 1 January, and he revealed it later, this is exactly what he did after marrying me and then announcing after two months.’

Khan, 65, was relying heavily on his new wife to help him make important decisions in the run up to July’s Pakistan elections when he hopes to become Prime Minister.

‘He doesn’t do anything without her instructions,’ said the BBC presenter Mrs Khan. ‘She is his spiritual guide. She tells him what to do and when to do it.’

She said that refusing to show Ms Wattoo’s face for the wedding pictures had not gone down well in Pakistan.

‘This has destroyed his political career,’ she insisted. ‘It is embarrassing the way the pictures of this marriage have come out. 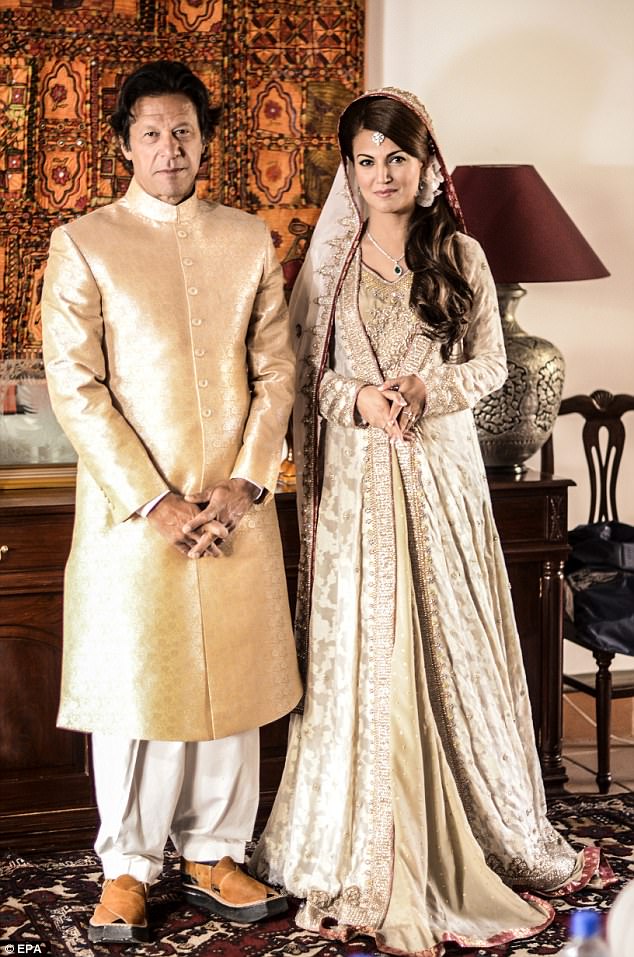 Imran Khan and his second wife were married for exactly a year. He text her to say that their marriage was over and that he wanted a divorce on October 31, a year to the day after they wed 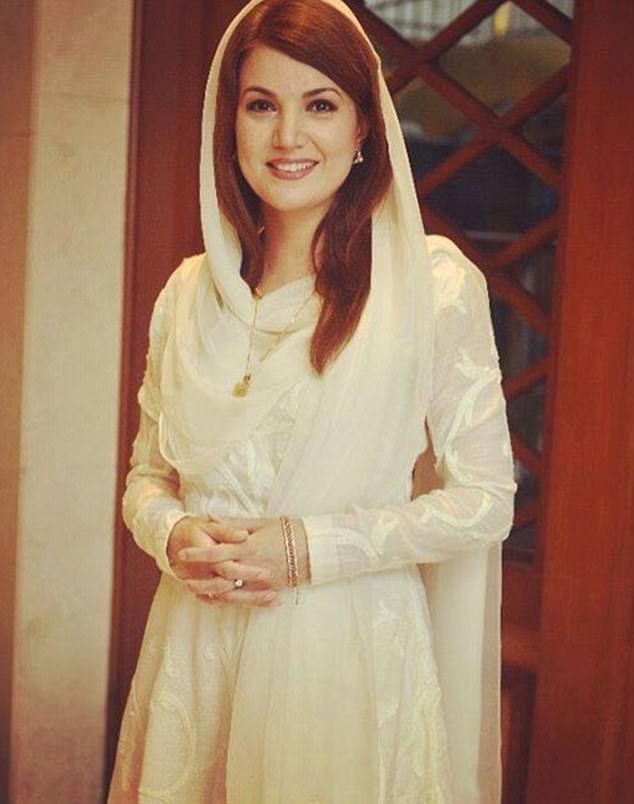 Mrs Khan said that Imran’s new wife, the spiritual healer Ms Wattoo, was controlling every aspect of his life. She said his new wife chose the date for recent intra-party elections

‘Pakistan has been put on the watch list for terror-financing. The interior minister has been able to defer this, but right now when we are being chased and being called all sorts of names as a country.

‘And then to give out an image like this isn’t good. Imran has been branded as a Taliban apologist and when you see this kind of picture, you give them a stamp and seal on that.’

She said she had been told that Khan’s new wife chose the date for recent intra-party elections.

And Khan was adamant that his divorce from second wife Reham was to be October 31 last year, a year to the day he married her.

Mrs Khan, a former BBC weathergirl, said: ‘It is all about numbers. She is a soothsayer and this has brought a lot of criticism against him in Pakistan. These type of practices are frowned upon. We don’t see it as very acceptable to rely on numbers in Pakistan.

‘She chose the date for intra-party elections. She says what he should be doing next. If she says stay in the mountains he does that and he comes down when she says.’

Khan, who divorced first wife Jemima Goldsmith in 2004, has led his Justice Party for more than 20 years and suffered several general election defeats.

‘His marriage and her making of decisions has upset his party across the board.

‘A lot of the time it was reported that I was going to meetings and meddling in any party affairs. But I never did any of that. I was never consulted about anything.

‘One of the biggest things is this woman making decisions. Even if she wasn’t a spiritual guide. She is getting to choose dates of intra-party elections.

‘He has said he does not make any decisions without her instructions.

‘She decided about a candidate and the timing of an intra- party election and then the timing of the marriage in the week following this defeat.

‘We have less than four months before the elections. This is seen as wrong timing for any kind of marriage.’ 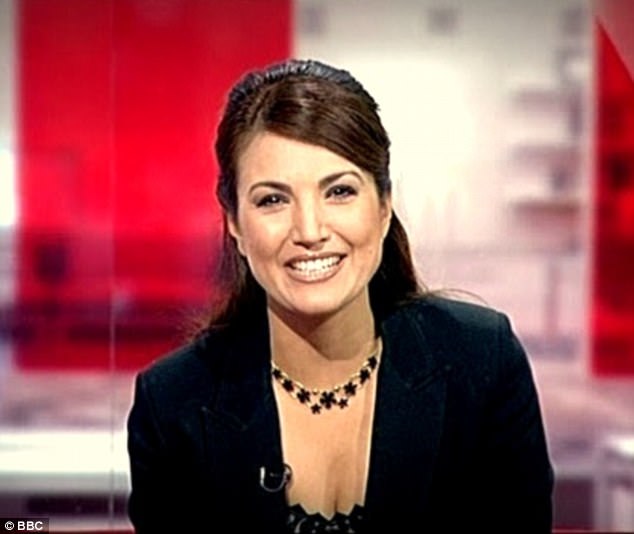 Mrs Khan, speaking in London, said she knew her ex-husband was getting close to Ms Wattoo during their marriage, but that wasn’t why the relationship ended abruptly in divorce in 2015 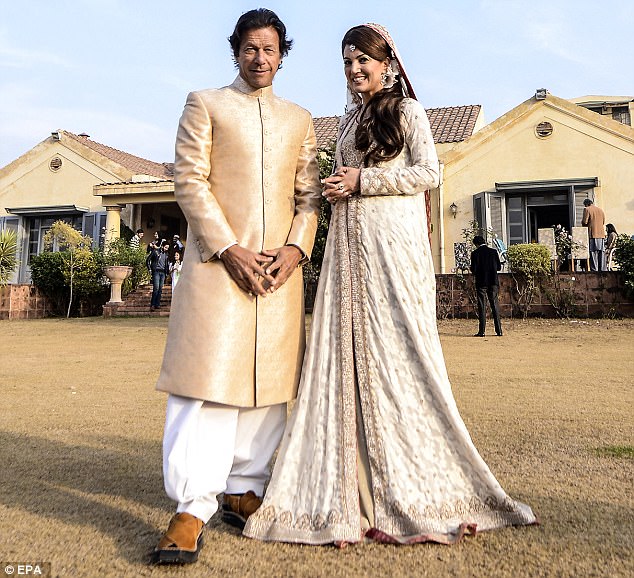 She said the former cricketer had been ‘untruthful’ about the date that he married Ms Wattoo, claiming that they tied the knot on New Year’s Day and only confirmed it last week

She said Khan ‘constantly taking instructions from a sooth-sayer’ has people in Pakistan questioning his political decisions and whether he could be trusted as a leader.

‘He is on record that he doesn’t take a move without her and he has managed to alienate all the voting banks, even those who believe in mysticism or soothsaying which she practices.’

Mrs Khan went on: ‘As regards to my marriage, I thought we were having a perfect husband-and-wife relationship together. There were no arguments, no disagreements. The disagreements were only about his political decisions. I am an ideologist.’

She and Khan were married for less than a year and she said she had learned from the Pakistani media last September that Khan was set to divorce her.

She said the divorce was announced on Pakistani TV, but Khan advised her to ignore it.

‘He said they used to say this about Jemima and I was just to ignore it. I wasn’t allowed to speak to the media and Imran denied it. He said ‘They say that all time, ignore it.’

But she knew her marriage had run into problems and she accepted they were to be divorced, but was unsure of the date.

And on October 28 she received a text from her husband of the divorce date which was to be their first wedding anniversary as she was boarding a flight to London.

She delayed her flight for 24 hours to deal with the sad twist in her marriage.

‘I couldn’t understand why he was insisting on the date, as at the time there were elections taking place.

‘So I walked out as it was unacceptable. I had been putting up with quite a lot of things. It wasn’t a husband and wife tiff, it was actually a little more disturbing. I walked out on him, but I didn’t decide the date of the divorce.

He could have done it on any other day because of the elections. It wasn’t like a personal relationship problem.

She said he had gone back to dark ages by portraying his wife at their marriage as he had done and that Jemima was very loved in Pakistan and she had never been veiled.

The journalist had experienced criticism herself in Pakistan and been labelled an ambitious fame hunter who had ‘ shamed’ Mr Khan with her colourful clothes and political views.

‘In 2018 Pakistan is a very different place. People have become very savvy. They say give them, roads, clean drinking water and education and that is how the election is going to be won. 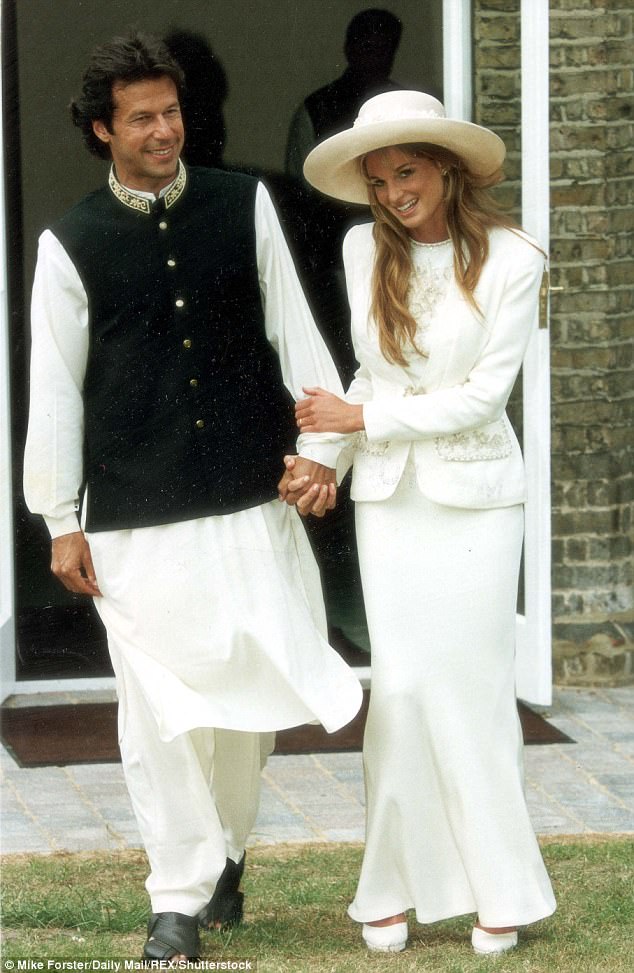 ‘Who gets married like that in Pakistan these days? People include the pictures of the wife. But he has done something that has give an opportunity for people to make fun of him.’

Told that some might see her as a bitter ex-wife, she said: ‘They are saying that. But with this kind of picture, I was like ‘oh my god why? It is fine that he got married.

‘It doesn’t matter who it was or that it was my ex husband. It matters that he is a political leader and people are making fun of this picture.

She said Khan will never be able to live down his playboy image and that their marriage was destined to be short-lived.

‘Diana said her marriage was over-crowded because there were three people in hers. In mine it was like a house party because of his politics. We were not able to make our own decisions as a couple.’