A pre-programmed robot dentist has successfully fit two implants into a patient’s mouth without human intervention.

The cutting-edge machine specialises in dental implant operations and is said to be the first of its kind in the world.

Around 400 million dental patients in China could benefit from the automated machine.

The future of dentistry? The robotic arm installed two implants for a patient last week in China 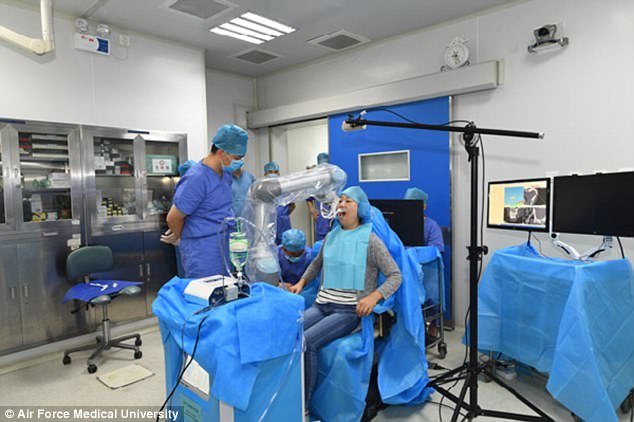 Unprecedented: This is the first dental implant surgery carried out by a robot, said the dentists

The operation took place on September 16 at the College of Oral Medicine, an affiliation to China’s No. 4 Army Doctors University in Xi’an.

According to the college, a team of dentists, led by prosthodontist and professor Zhao Yimin, had put a series of orders into the robot.

The operation was carried out using a special marking system which guided the robotic arm to perform orders in the patient’s mouth.

The marking system, facilitated by a 3D-printed physical frame, contained data of the patient’s skull and jaw, which had been collected through a CT scan prior to the operation. 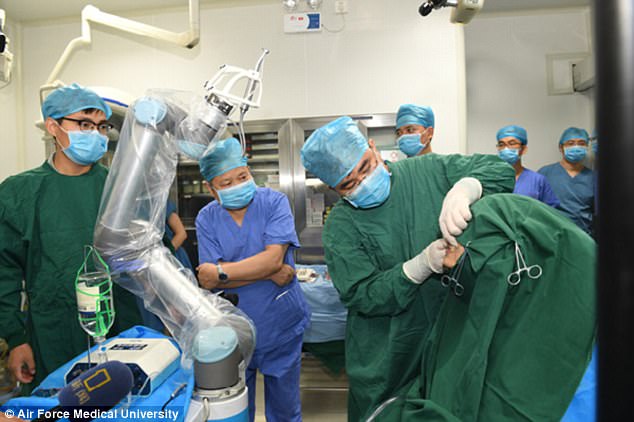 After the robot fit the implants, a dentist put the dental base and dental crown for the woman

The patient, a woman, had two teeth missing.

After the robot put in the implants, the dentists fit the dental base and dental crown.

The surgery was said to be completed within an hour. 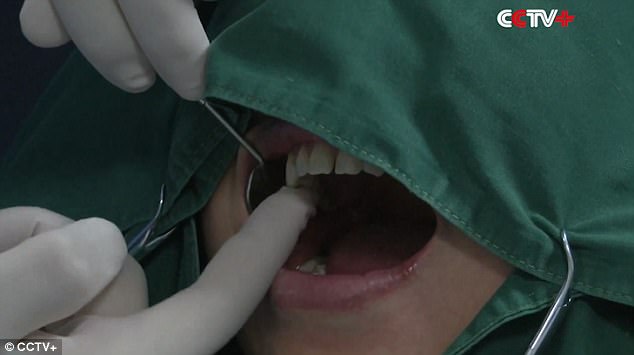 The robot, in Xi’an, China, is said to have performed the operation with a high precision

The dental implant robot has been considered as a breakthrough in China’s dentistry as the country has more than 400 million patients who are in need of dental implants, according to the college.

In March, Yomi, a robotic surgical system, gained approval from the U.S. Food and Drug Administration.

The system is being developed by Neocis, a company based in Miami, Florida.

Different from the Chinese dental implant robot, which is automated, Yomi is designed to act as an assistant to dentists.

There is an 83 percent chance that artificial intelligence will eventually takeover positions that pay low-wages, says White House’s Council of Economic Advisors (CEA).

A recent report suggests that those who are paid less than $20 an hour will be unemployed and see their jobs filled by robots over the next few years.

But for workers who earn more than $20 an hour there is only a 31 percent chance and those paid double have just a 4 percent risk.

To reach these numbers the CEA’s 2016 economic report referred to a 2013 study about the ‘automation of jobs performed by Oxford researchers that assigned a risk of automation to 702 different occupations’.

Those jobs were then matched to a wage that determines the worker’s risk of having their jobs taken over by a robot.

‘The median probability of automation was then calculated for three ranges of hourly wage: less than 20 dollars; 20 to 40 dollars; and more than 40 dollars,’ reads the report.

The risk of having your job taken over by a robot, Council of Economic Advisers Chairman Jason Furman told reporters that it ‘varies enormously based on what your salary is.’

Furman also noted that the threat of robots moving in on low-wage jobs is, ‘another example of why those investments in education to make sure that people have skills that complements automation are so important,’ referring to programs advocated by President Obama.