A new video shows how rapidly the Alaska Department of Transportation and Public Facilities was able to repair the vast damage a 7.0 magnitude earthquake did last Friday.

Aerial views of the damage and repair process taken by Alaska Aerial Media showed the before and after of four consistent days of work to smooth over the large craters in the city of Anchorage.

After iconic images of the destructive force emerged from the November 30 quake, the new footage ‘speaks volumes to the level of work our crews have been putting in 24/7’ the department said Thursday.

A collapsed off-ramp in Anchorage, Alaska became an iconic image of the 7.0 earthquake last Friday. But the road leading to Anchorage Airport reopened Tuesday morning 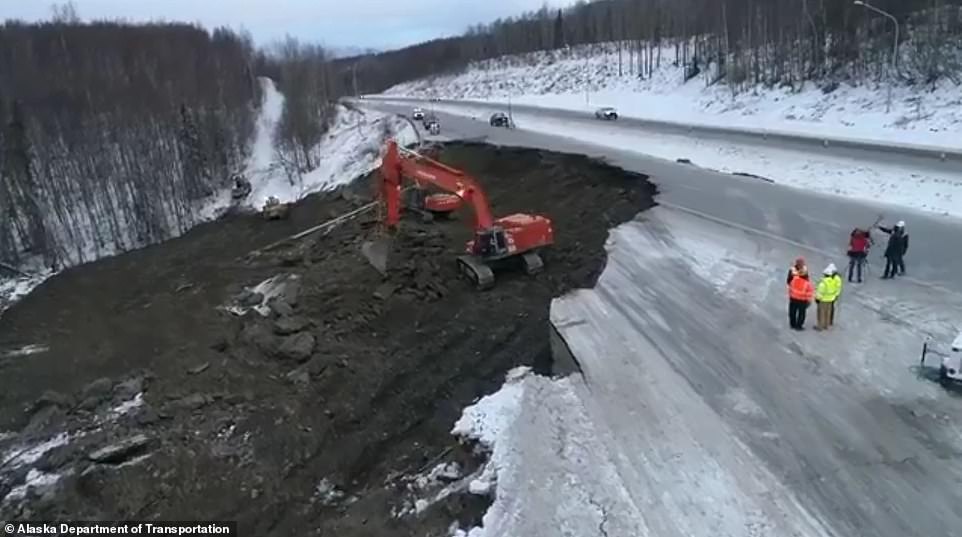 It struck at 8:29am last Friday and was followed by a magnitude 5.7 quake with regular aftershocks of 4.0 or larger.

The collapsed off-ramp in Alaska’s largest city leads south to Ted Stevens Anchorage International Airport and the only highway heading north from the city, the Glenn Highway, were among priorities.

As soon as rocking from the first tremor came to a halt highway officials recognized they had multiple breaks in ‘essential travel’ so identified eight sites to focus on first and got to work despite the cold temperatures.

The weather in mid-November dropped to single digits but over the weekend temperatures stayed near or above freezing.

Even though it’s not the ideal condition, it helped. 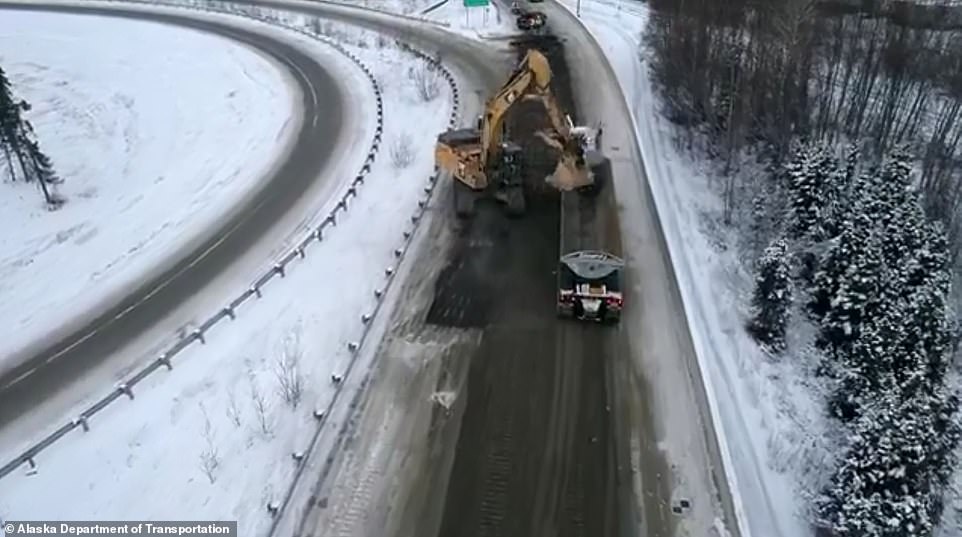 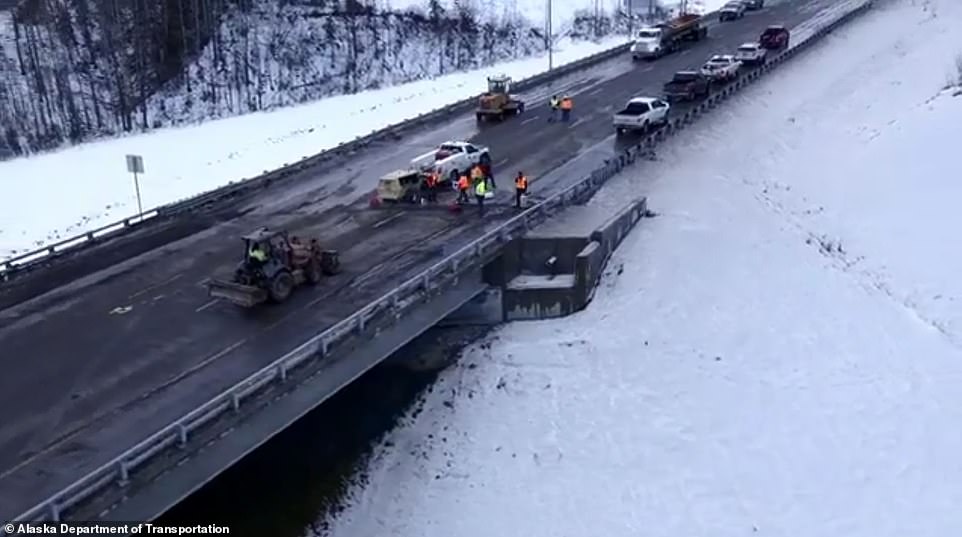 ‘We basically called the contracting community, and we split up the sites between multiple contractors and our construction staff,’ spokesperson Shannon McCarthy said Tuesday.

The task was even trickier because Anchorage asphalt plants had been shut down for the season in late October. It can take more than a week to get them up and running depending on the moisture content in the rock used as part of the mix but workers started early.

‘As soon as the contractors felt their asphalt plants were safe, they ran over and started up,’ McCarthy said. 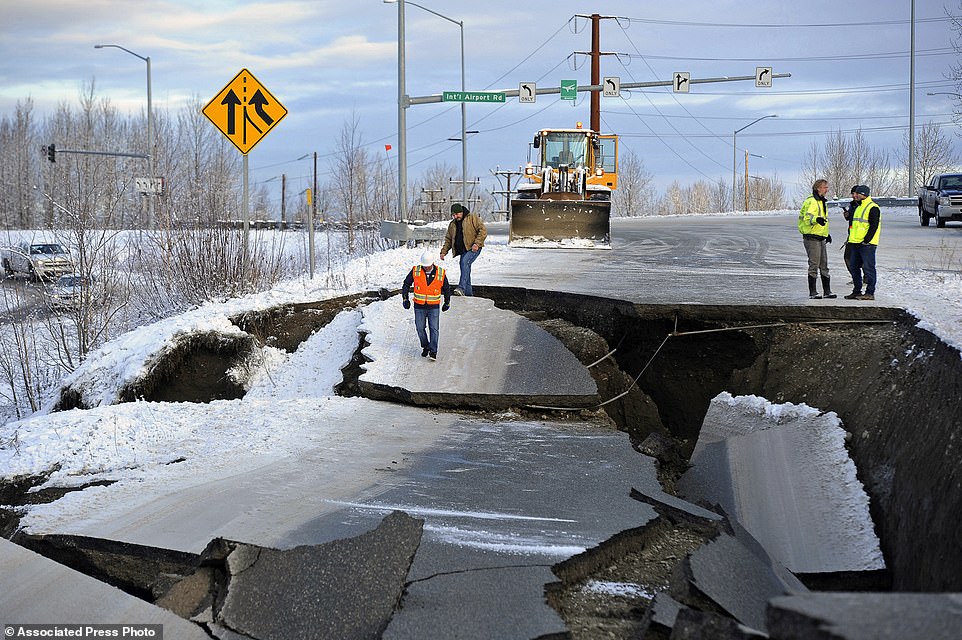 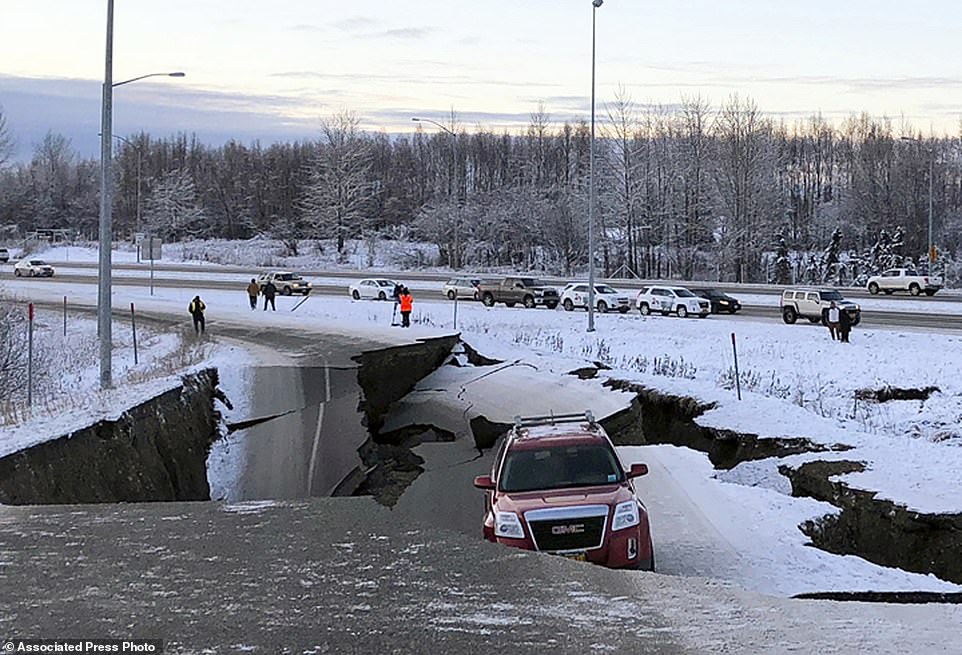 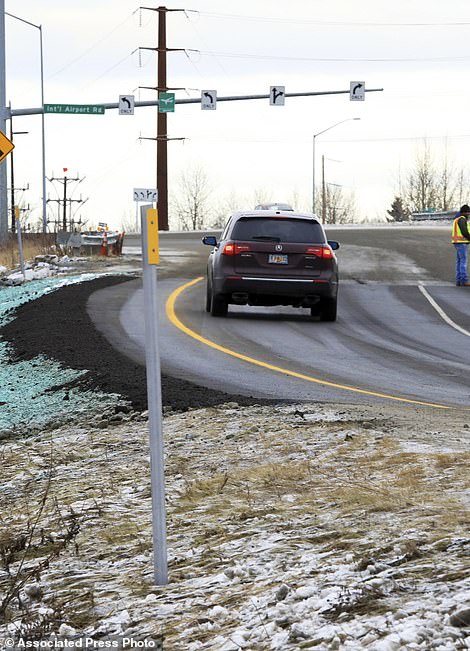 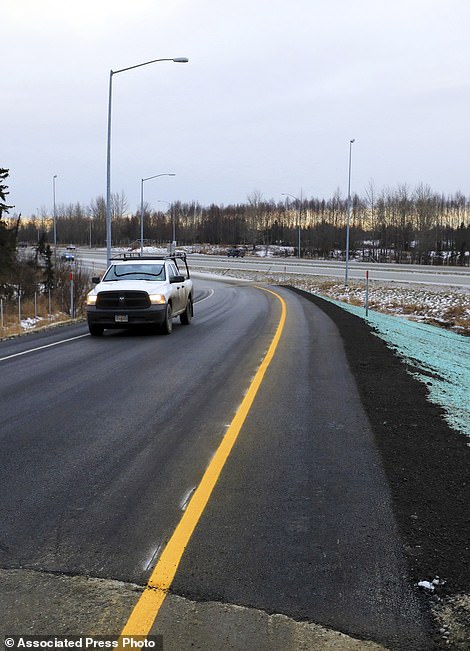 Earthwork at the off-ramp began before the sun had even set Friday. By the time heavy equipment had filled in and packed down the ramp, asphalt was ready to be laid down, however it’s a rare sight in December.

‘That’s almost unheard of,’ McCarthy said of the difficult work from crews that applied paint while the asphalt was warm.

All six lanes of the Glenn Highway fully reopened between 1.30am and 3.30am Tuesday morning. Two sinkholes created crescent-shape craters near Mirror Lake that only got bigger with every 4.0 aftershock.

The department plans to monitor the site for dips where the speed limit is 65 mph (104 kph), as winter progresses and permanent repairs will be made in spring.

When it collapsed a small station wagon on the dropped at least 6 feet (1.8 meters) but came to rest upright on a flat piece of roadway surrounded by jumbled sections of earth. No one inside was injured.

Work at other sites is progressing.