A 19-year-old basketball player at Ball State University in Indiana took his own life in his off-campus apartment Tuesday, after sending out a pair of cryptic tweets and leaving voicemails for his teammate.

Zach Hollywood, a sophomore majoring in special education at Ball State, was found dead at Varsity House Apartments in the 3000 block of North Oakwood Avenue in Muncie just before 1pm, reported The Star Press.

About seven hours earlier, Hollywood sent out his final, ominous tweet, which read: ‘Be careful what you say to everyone because you don’t know what kind of battles they are going through.’

His penultimate message, shared on Twitter at 5.24am, stated: ‘Just so everyone knows I did not cheat If you want the truth ask tony or the police because they’ll have my phone.’

It remains unclear what Hollywood was referring to when he mentioned cheating, or who was the mysterious ‘tony.’ 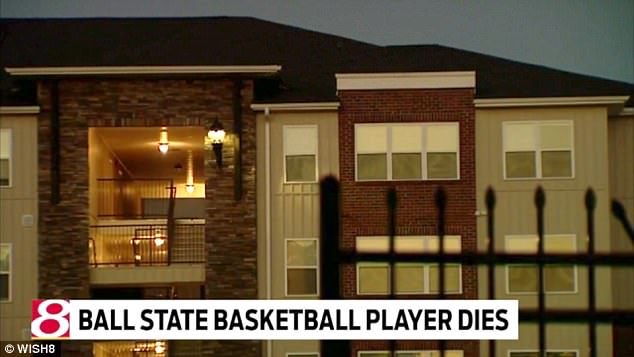 He was found dead at Varsity House Apartments in the 3000 block of North Oakwood Avenue in Muncie, Indiana (pictured)

Internal turmoil: At 5.39am Tuesday, Hollywood sent out his final, ominous tweet 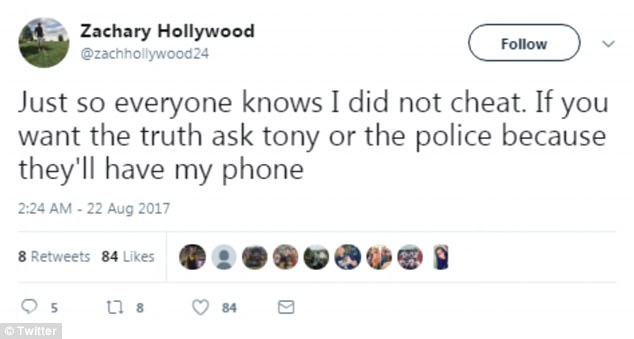 It also emerged in the hours after Hollywood’s death that before taking his life that morning, he had left multiple voicemails for his teammate and close friend Trey Moses, who tweeted later: ‘I just listened to he [sic] voicemails you left me bro … I LOVE YOU SO DAMN MUCH , I promise you I’m gonna make it for us bro.’

In a related tweet, Moses wrote he was sorry for missing Hollywood’s calls that morning because he was asleep.

‘I feel I coulda stopped it…. I love you bro. we’re gonna make it,’ he tweeted.

Ball State released a statement addressing Hollywood’s suicide, which was described as ‘a tragedy.’

‘Zach has been a part of our family for the past year,’ the statement read. ‘During his time on campus, he was a member of men’s basketball team and made many positive impressions throughout campus.’ 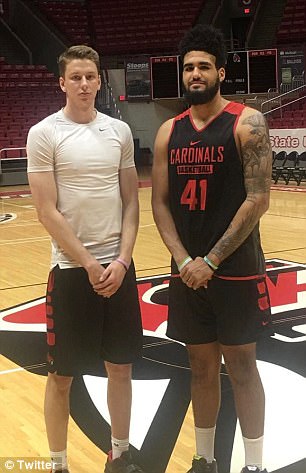 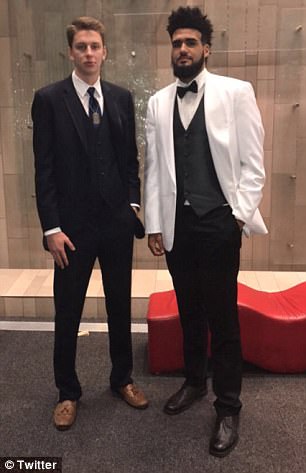 His teammate and close friend Trey Moses (pictured together left and right) has revealed that Zach had tried calling him before ending his life, but he was asleep

Moses said Hollywood had left him voicemails, which he played after his friend’s death

Hollywood, a native of Bradley, Illinois, lost his mother, Susan Hollywood, a year ago. She was 49 years old and Zach was her only child.

Susan Hollywood’s obituary, published in The Daily Journal, read in part: ‘Her life revolved around sports and she was her son’s biggest sports fan.’ 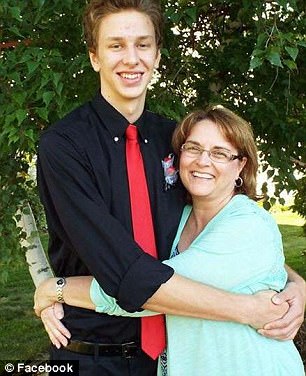 Greiving son: Hollywood lost his mother, Susan Hollywood (right), a year ago. She was 49 years old and Zach was her only child

Ball State coach James Whitford offered his condolences to the Hollywood family Wednesday, calling the 19-year-old ‘a terrific young man with an incredibly bright future in front of him.’

‘His loss is a true tragedy for all those who knew and loved him,’ Whitford said in a statement. ‘Our thoughts and prayers are with all those affected, especially Zach’s family. This is an incredibly hard moment for everyone.’

Hollywood, a 6-foot-9 forward, redshirted last season as a freshman and was expected to play a significant role for the Cardinals this season, reported WISH-TV.

He chose Ball State after averaging 17.5 points during his senior season at Bradley-Bourbonnais High School.

The school encouraged anyone who needed help coping with Hollywood’s death to seek out help on or off campus.