Indonesia, Bali criminalises sex and living with partner outside of marriage

The Indonesian parliament has approved strict new laws that will criminalise sex outside of marriage.

Officials have confirmed unmarried couples caught having sex face up to one year behind bars once the laws are passed later this month.

Living with your partner before you are married will also be banned and involves a penalty of up to six months jail.

The new laws will also apply to foreign residents and tourists, including up to a million Australians who visit island holiday hotspot Bali each year.

The new criminal code is expected to be passed on December 15 but won’t come into effect immediately, which could take up to three years.

‘All have agreed to ratify the (draft changes) into law,’ lawmaker Bambang Wuryanto said.

‘The old code belongs to Dutch heritage … and is no longer relevant.’

The law may make it more difficult for unmarried couples to check into a hotel room.

Couples can only be prosecuted if they are reported by a spouse, parents or their children.

Deputy Minister of Law and Human Rights Edward Hiariej said the new law ‘has a lot of implementing regulations that must be worked out, so it’s impossible in one year,’ but takes a maximum of three years to transition from the old code to the new one.

The draft has the support of some Islamic groups in a country where conservatism is on the rise, although opponents argue that it reverses liberal reforms enacted after the 1998 fall of authoritarian leader Suharto.

A previous draft of the code was set to be passed in 2019 but sparked nationwide protests.

News of the new laws being approved quickly sparked outrage.

‘We are going backward… repressive laws should have been abolished but the bill shows that the arguments of scholars abroad are true, that our democracy is indisputably in decline,’ Amnesty International Indonesia director Usman Hamid said. 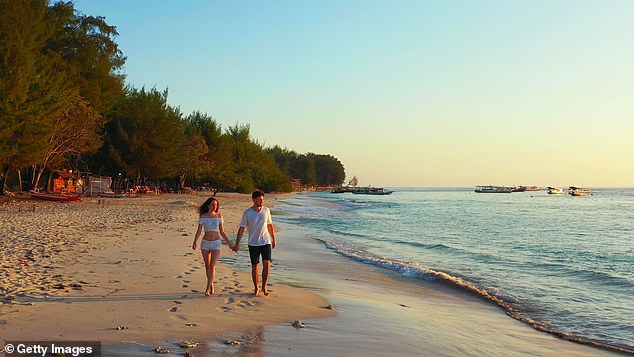 Unmarried couples will face time behind bars if they’re caught breaking the strict new laws (pictured, a couple walking along a Bali beach)

Business groups have warned the new laws could destroy Indonesia’s image as a tourism and investment destination.

Maulana Yusran, deputy chief of Indonesia’s tourism industry board, said the new bill was ‘totally counter-productive’ at a time when the economy and tourism were starting to recover from the pandemic.

‘Hotels or any accommodation facilities are like second homes for tourists. With the ratification of this criminal code, hotels are now problematic places,’ he told Reuters.

The new rules could have a major impact on the LGBTQ community in Indonesia, where gay marriage is not allowed.

The new laws will also apply to foreign residents and millions of tourists who visit the island nation each year (pictured, visitors enjoying Bali’s Seminyak beach