Deacth taxes collected by the Government and which erode family wealth are forecast to double in a decade, according to exclusive research for The Mail on Sunday.

But analysis by financial services company Canada Life reveals this is likely to jump in future years – to £10billion a year by 2030.

The value of a person’s estate is made up of property, money and possessions – after debts are settled. And each individual has an allowance for their total wealth that is free of inheritance tax when they die. This is known as the nil-rate band and has stood for many years at £325,000. Any estate worth more than this is subject to inheritance tax at 40 per cent.

Neil Jones, market development manager for the company, says: ‘The Government is receiving a windfall by keeping the nil-rate band frozen and limiting the use of the residence nil-rate band to those who own property and leave it to their children or grandchildren.’

But as ever with taxes extra tricks and little-known rules change the outlook for those wanting to keep their wealth out of the taxman’s reach – even from beyond the grave.

For example, unused nil-rate bands can be inherited by a surviving spouse. And the addition of a new allowance that includes a family’s main home lets some people protect more wealth.

This means fewer than five per cent of deaths trigger an inheritance tax bill. But this figure is likely to swell in coming years, with increasing numbers of middle- class, home-owning families swept into the tax-paying threshold. 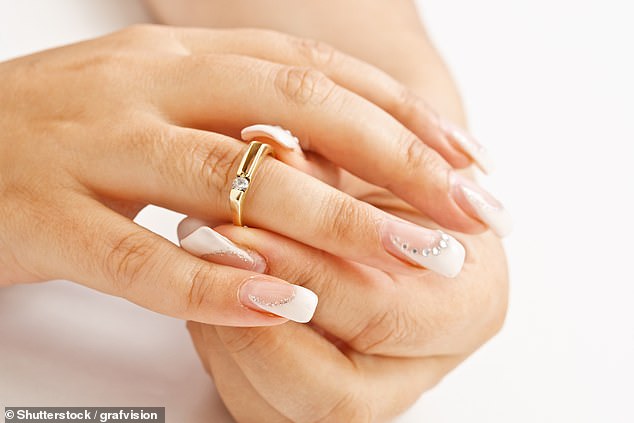 Wedding gifts can be given free of inheritance tax up to £1,000 per person

Others end up paying the dreaded tax simply because they have not taken lawful and sensible action to prevent it. Jones adds: ‘Perhaps because of a very British reluctance to discuss death, many people – and sometimes their financial advisers – won’t talk about estate planning. As a consequence, the Government is undoubtedly receiving tax that with proper planning would not need to be paid.’

So what can people do now to preserve more money for their loved ones? Generous giveaways can be made now, while still alive, and they will not be counted for inheritance tax in future. This is known as ‘lifetime gifting’ and is an effective way to mitigate inheritance tax. Here are the main ways to take advantage:

Up to £3,000 can be given away each tax year free of inheritance tax worries. Any unused portion of this ‘annual exemption’ can be carried forward to the following tax year, which runs from April 6 to April 5, but for one year only. So if you give away £1,000 in year one, you can give £5,000 the following tax year.

Home can help you out

Homeowners planning to leave their property to children or grandchildren can make a serious dent in any potential inheritance tax bill. This is thanks to the additional residence nil-rate band, which was introduced in 2017.

Rachael Griffin, of advice and investments firm Quilter, says: ‘On April 6, the Government increased the residence nil-rate-band to £150,000. It gives people an additional threshold before inheritance tax becomes due on their estate.’

Any unused portion of the allowance can also be inherited by a surviving spouse – so a couple could pass on assets worth £650,000 and a home up to £300,000 free of inheritance tax after the second death. The property allowance will increase to £175,000 from April next year and will rise in line with inflation in following years.

For properties worth more than £2 million, the allowance drops by £1 for every £2 that the value exceeds the threshold.

For more information about the allowance and its exclusions visit gov.uk/inheritance-tax.

In addition to the annual exemption, wedding gifts can be given free of inheritance tax up to £1,000 per person – increasing to £2,500 if the recipient is a grandchild and £5,000 for a child. Both husband and wife can each make these gifts under their own individual allowances. Normal gifts for Christmas and birthdays, for example, can be made if the giveaway does not affect the giver’s standard of living.

Spending to assist an elderly relative or child under the age of 18 and payments made to charities or political parties are also exempt.

Small handouts of up to £250 per person can be made to an unlimited number of recipients – so long as they have not already benefited from another exempted payment in the same tax year.

Claire Walsh, personal finance director at wealth manager Schroders, says: ‘The “gifts from normal expenditure” rule allows you to gift any amount of surplus income without it being included in the inheritance tax calculation on your death.’

Walsh says the payments have to be regular in nature – whether monthly, annually or on specific dates – and cannot impact a person’s normal standard of living.

4. USE EXEMPTION FOR LARGER GIFTS

Potentially exempt transfers are larger gifts with a value above any annual hand-out allowances. They are only free of inheritance tax if a person survives seven years from the date the gift was made.

If the donor dies within seven years, a taper relief applies on the tax owed.

The full 40 per cent is taxed if death occurs in the first three years, after which the tax rate drops by 8 per cent a year until it hits zero per cent at seven years.

5. GIVE AWAY ASSETS TAX FREE IN A TRUST

Trusts are legal arrangements that can be used to manage assets for beneficiaries – such as children – now or in the future. They can also be used to give away assets but still retain some benefit from them. Once in a trust they are no longer considered part of an individual’s own estate, so long as that person survives seven years.

Jones adds: ‘There’s a range of trusts available that can help reduce the amount of tax payable when you die. Some work on a seven-year rolling basis, so even if you’ve been able to pass on money tax-efficiently once, you can do it again.’

Inheritance tax may be owed when transfers are made into a trust. If they exceed a person’s nil-rate band, tax is owed immediately on the excess at a rate of 20 per cent. But if death occurs within seven years, the rate increases to 40 per cent.

Professional advice from a solicitor or financial adviser is recommended before setting up a trust. For help finding advice, use websites like unbiased.co.uk and lawsociety.org.uk.