An injured bear walking on three legs has sparked concerns after being caught on camera limping and rummaging through garbage.

The animal – which has been nicknamed ‘8 Ball’ – was spotted by residents in Quail West, Florida.

Residents have inundated officials with reports of the animal, concerned that it is suffering, and fearing for their safety as goes through garbage.

The Florida Fish and Wildlife Conservation Commission (FWC) have said they won’t get involved – and believe the bear can walk off the injury.

But the Flagane Humane Society, which provides shelter and care for animals, is asking for locals to stop calling authorities about the bear, in case they put its life at risk.

They wrote on Facebook: ‘Due to the calls of people saying they are in fear, it will put the bear’s life at risk for euthanasia if FWC and the sheriff’s department continue to receive so many calls of fears for citizens safety.

Resident Mark Jones told Naples Daily News, ‘He’s had a bad injury. His foot may be broken – he’s walking on three feet now … he needs to be tranquilized and hauled off.’ 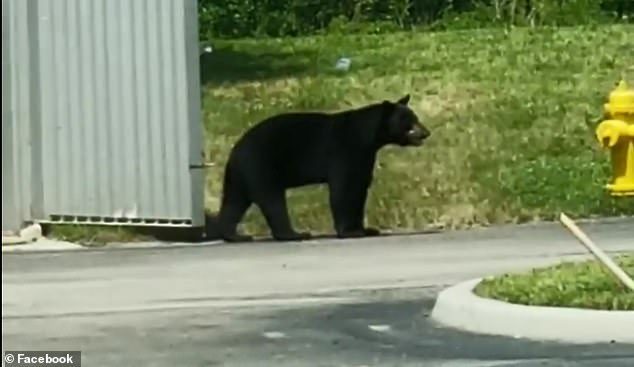 But bear biologist Mike Orlando said: ‘If it’s healthy and moving, we want it to be in the wild… but from the photos we’ve been getting,he seems like a nice big healthy bear who’s just walking with a limp’.

He added to News-Press: ‘We appreciate phone calls from people who are concerned; we depend on the residents to some degree to help us keep an eye in this bear. Even if he’s got a limp, it’s OK. Of course, If he’s wasting away or he can’t move at all, that’s when we need people to give us a call so we can come assess the situation.’

According to FWC, the bear likely left its territory due to mating season which runs from June to August. There are no current plans to kill the bear.