The whistleblower complaint that concerned President Trump’s phonecall in July with Ukraine’s president has been declassified and is likely to be released later on Thursday.

Utah Republican Rep. Chris Stewart revealed the decision had been made on Fox News claiming it does not contain any damning information.

‘I encourage you all to read it,’ Stewart tweeted. The complaint has not yet been made available to the public.

‘This is going to go nowhere. … there are just no surprises there,’ he said.

Democrats who have reviewed the secret whistleblower complaint have called it ‘deeply disturbing’ and said it gives them new leads to pursue as they consider impeachment.

The complaint is at least in part related to a July phone call between Trump and Ukrainian President Volodymyr Zelenskiy in which Trump prodded Zelenskiy to investigate Democratic political rival Joe Biden. The White House released a rough transcript of that call on Wednesday morning.

House Democrats emerging from a secure room would not divulge details of the complaint, but described it as disturbing and urgent. 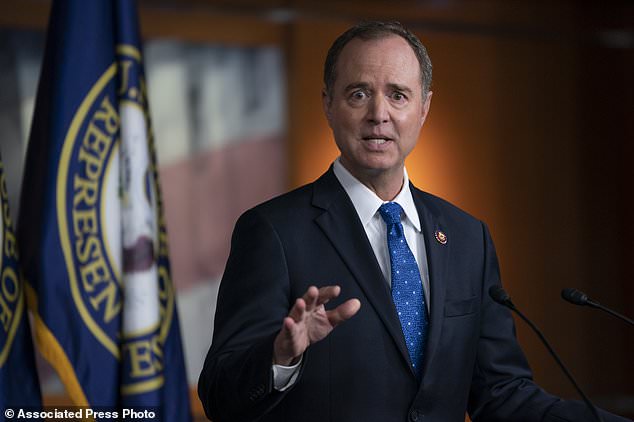 House Intelligence Committee Chairman Adam Schiff, D-Calif., said it ‘exposed serious wrongdoing’ and ‘certainly provides information for the committee to follow up with others.’

House Intelligence Committee Chairman Adam Schiff, D-Calif., said it ‘exposed serious wrongdoing’ and ‘certainly provides information for the committee to follow up with others.’

California Rep. Eric Swalwell told CNN that the whistleblower ‘laid out a lot of other documents and witnesses who were subjects in this matter.’

The complaint showed the whistleblower learned details of the call from White House officials, according to one person familiar with the complaint who was granted anonymity to discuss it.

Another such person said the lawmakers did not learn the identity of the whistleblower.

A Democratic member of the panel, Illinois Rep. Raja Krishnamoorthi, said the whistleblower ‘lays out the situation very logically’ and ‘is both acknowledging the things that he or she knows and doesn’t know, which is a hallmark of a credible document.’ 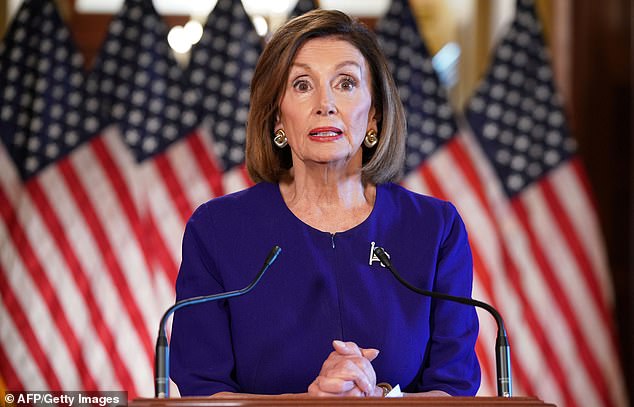 Lawmakers and aides in D.C. spoke on the condition of anonymity to provide insight to the days leading up to Nancy Pelosi’s announcement

House Speaker Nancy Pelosi – who on Tuesday fully endorsed an impeachment investigation in light of the Ukraine revelations – and Senate Democratic Leader Chuck Schumer also viewed the complaint. Schumer said he is even ‘more worried’ now than he was before reading it and ‘there are huge numbers of facts crying out for investigation.’

Most Republicans were quiet or defended the president as they left the secure rooms. But at least one Republican said he was concerned by what he had read.

‘Republicans ought not to be rushing to circle the wagons and say there’s no ‘there there’ when there’s obviously a lot that’s very troubling there,’ said Nebraska Sen. Ben Sasse, a GOP member of the Senate intelligence panel who has been an occasional critic of Trump. He added that ‘Democrats ought not be using words like ‘impeach’ before they knew anything about the actual substance.’

Trump, whose administration had earlier balked at turning over the complaint, said Wednesday afternoon that ‘I fully support transparency on the so-called whistleblower information’ and that he had communicated that position to House Minority Leader Rep. Kevin McCarthy, R-Calif.

Lawmakers said they needed to see the complaint, not just the memo about the call, as they investigate the president and whether his actions were inappropriate. Pelosi on Tuesday said that if Trump abused his presidential powers, it would mark a ‘betrayal of his oath of office.’

New York Rep. Elise Stefanik, a GOP member of the House panel, tweeted that ‘it should be immediately declassified and made public for the American people to read.’

New York Rep. Hakeem Jeffries, a member of Democratic leadership, agreed, saying he expects it will be made public ‘sooner rather than later.’

The House and Senate committees have also invited the whistleblower to testify, but it is uncertain whether the person will appear and whether his or her identity could be adequately protected without Maguire’s blessing. Schiff said Wednesday morning that Maguire still had not provided any instructions on how that could happen.

Maguire then blocked release of the complaint to Congress, citing issues of presidential privilege and saying the complaint did not deal with an ‘urgent concern.’ Atkinson disagreed, but said his hands were tied.

Maguire is testifying publicly before the House Intelligence Committee on Thursday and privately before the Senate panel. Atkinson, who met privately with House lawmakers last week, will also talk privately to the Senate committee Thursday.