iPhone 12, 12 Pro and the iPad Air are available today

Apple’s new iPhone 12 goes on sale worldwide today, with keen customers able to pick up a handset either online or in store.

To mark the launch, Deirdre O’Brien, Apple’s senior vice president of Retail and People, made the bizarre claim there has ‘never been a better time to get an iPhone’, despite the economic crisis and global pandemic.

Apple is also launching the £999 iPhone 12 Pro today, which is the same size but features an extra telephoto camera and Lidar-based depth sensor to support augmented reality (AR), and an improved iPad Air tablet.

Photos show customers lining up outside the Apple Store in Sydney earlier today to be the first to get their hands on the devices, which will be followed by the iPhone 12 Mini and the iPhone 12 Max on November 13.

The iPad Air, launched at an event prior to the iPhone 12 unveiling, is also on sale for £599.

The screen comes fully laminated with True Tone support as well as an anti-reflective coating and the tablet will be powered by a USB-C cable.

As a result of this jam-packed display, the TouchID sensor has merged with the power button and moved to the top of the device.

iPhone 12 is available in all Apple stores worldwide from Friday and pre-orders for the phone also start delivering today.

‘We’re offering new ways for our customers to get to know all of our products before they buy, so they can be sure to get the product that’s right for them.

‘Whether our customers choose to connect with us in person, by phone, or online, our entire retail team is ready to deliver the world-class personalised service they’ve come to expect from Apple.’

Apple has admitted that iPhone launch day will ‘feel different’ this year because of the coronavirus outbreak, but people will be able to shop in-store safely.

It’s the first flagship phone launch the company has had since the Covid-19 outbreak, with the traditional queues often seen outside Apple Stores set to be replaced by social distancing, a new appointments system and express pick-up options at some locations. 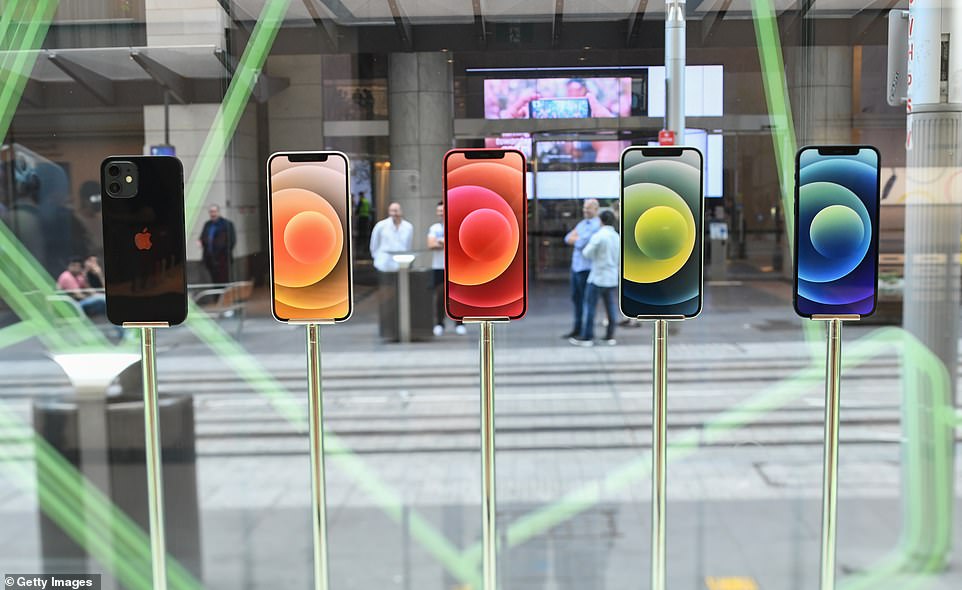 The iPhone 12 Pro has a 6.1 inch OLED Super Retina XDR display and features triple rear cameras including an Ultra Wide camera and a telephoto camera along with the A14 Bionic chip CPU and 5G connectivity

O’Brien ads that the new measures for buying products were designed to keep people safe while making sure they still receive the ‘Apple experience’.

‘This year is going to feel different in our stores – you’re used to experiencing that wonderful energy where everybody is shoulder to shoulder gathered around the new iPhones – we’re not going to have that experience this year,’ she told PA.

‘If people come to the store – which we want them to, we love the enthusiasm about our products – if you come to the store we will give you an appointment time to come back and visit us and then you’ll be in your own slot and we’ll take great care of you.’

This week, the phone maker announced a new feature for its retail stores called Shopping Sessions, where customers can book a one-on-one slot with an Apple Store employee to help select the new product they want. 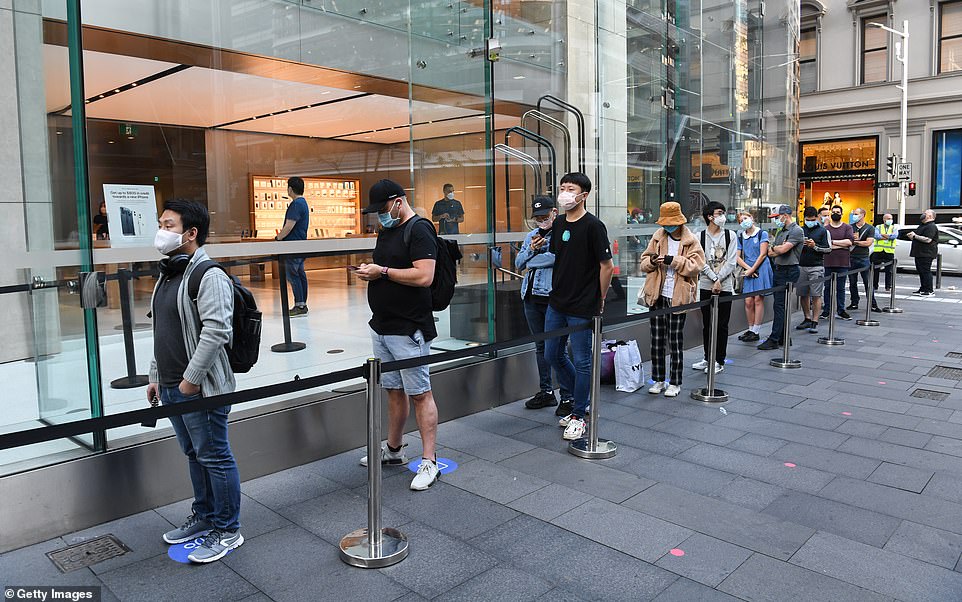 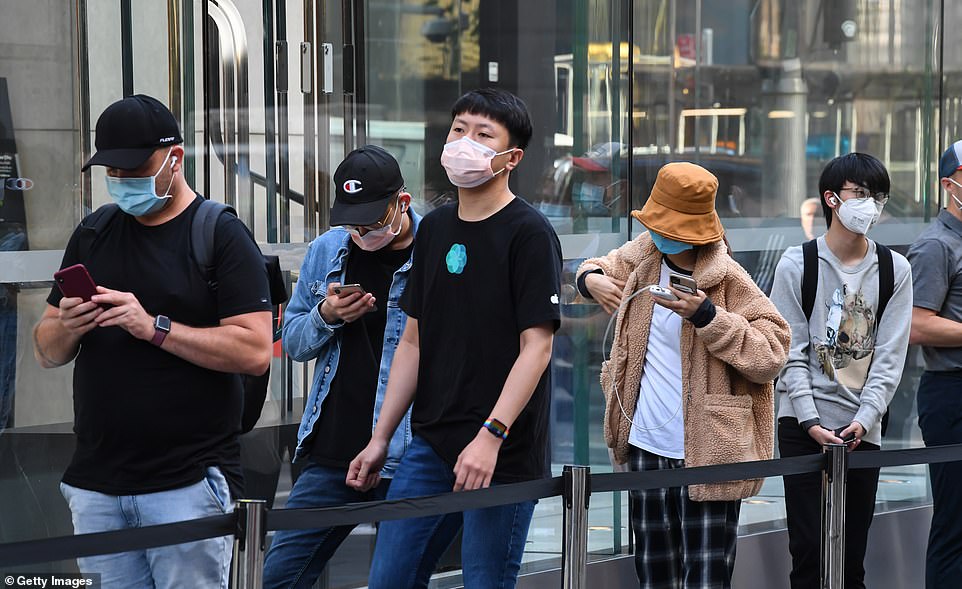 Customers look bored as they wait for the new iPhone in Sydney. There were fewer people lining up outside than last year for the iPhone 11

The same advice is also being made available online, with customers able to chat with specialists before deciding on a purchase.

The company will also run two Apple Express pick-up sites in the UK, at its White City and Stratford Apple Stores in London, where customers will be able to collect online orders and buy popular accessories.

‘We know we’re in unprecedented times right now and we’re working to make sure that we can greet our customers in-store in a great way, or online, and we feel really great about where we are at this moment, given all the complexity that we’re dealing with,’ O’Brien said.

‘We’ve developed multiple store operating models to allow us to successfully support our customers in stores given the various situations around the world.’

Outside Sydney’s Apple Store in the CBD, there were a ‘few dozen’ people lined up outside before it opened at 8am, according to CNET.

The first customer in line and the first to enter the building, Jun, had been queuing since 11:30pm the previous evening and ended up buying both an iPhone 12 and an iPhone 12 Pro. 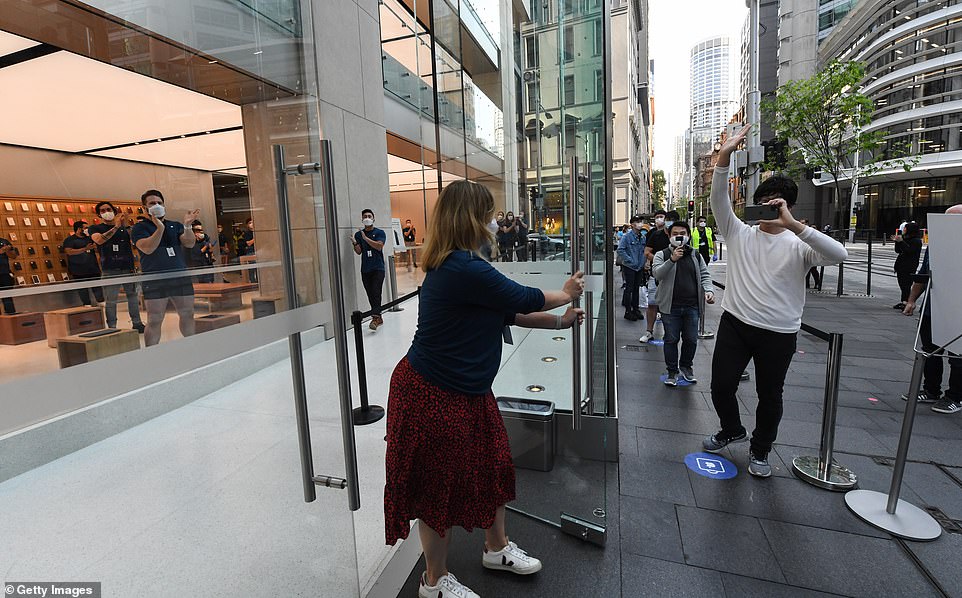 Staff open the Apple Store in George Street for customers to look at the new iPhone 12 on sale on October 23, 2020 in Sydney, Australia 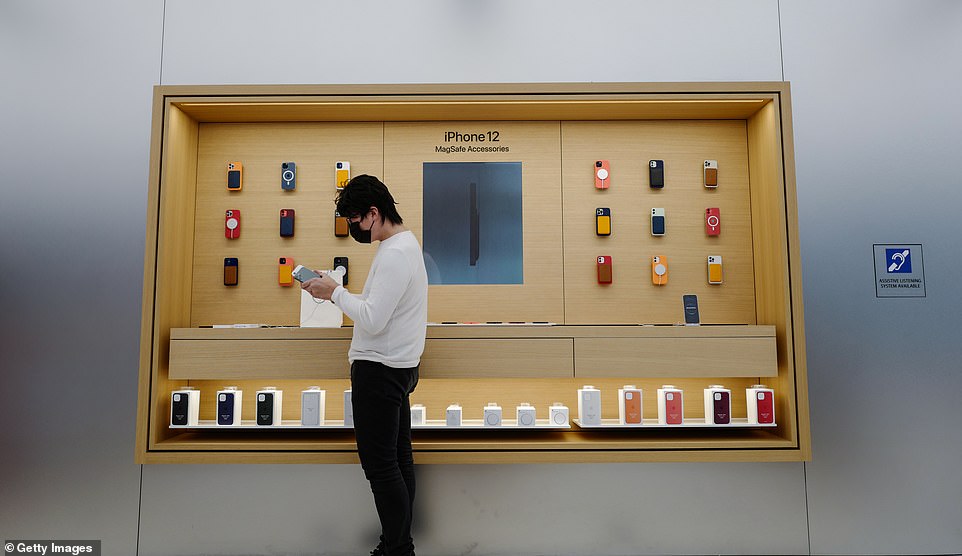 Jun, the first customer in Sydney’s Apple Store, enjoys the feel of the new iPhone 12, which is notable for its flat edges unlike the curved edges of recent iPhone models 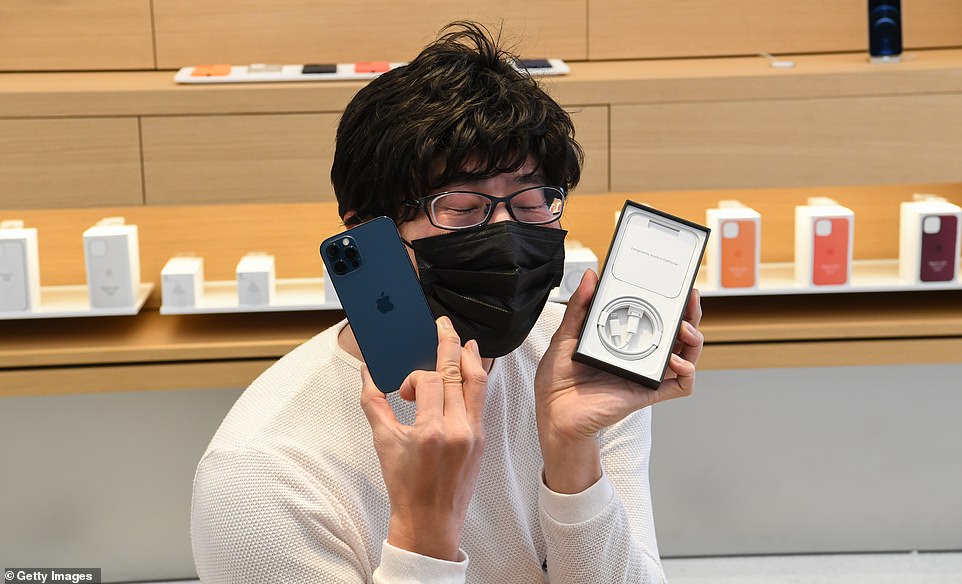 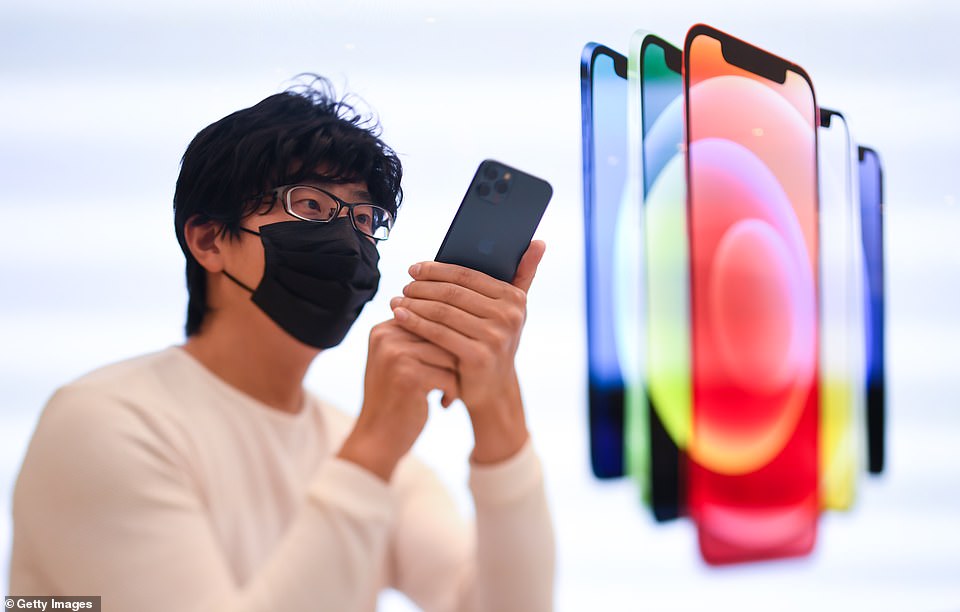 Jun tries out the new iPhone 12, which will be followed by the release of iPhone 12 Mini and iPhone Pro Max on November 13

The two models went on sale in China today following signs of strong consumer interest from early pre-order, according to Reuters.

However, the short queues outside Apple Stores in the business hub of Shanghai struck a contrast with the crowds that flocked to past launch events, as most ordering has now shifted online.

‘I feel great being the first customer to get the new iPhone,’ said Yan Bingqing, 30, who arrived before the Shanghai store opened, and was in a line of about 20 people. ‘I’ve been waiting a long time.’

Images from the Beijing Apple Store show hordes of people both inside the building and queuing up outside, showing even a global pandemic won’t put people off getting their hands on a new Apple device. 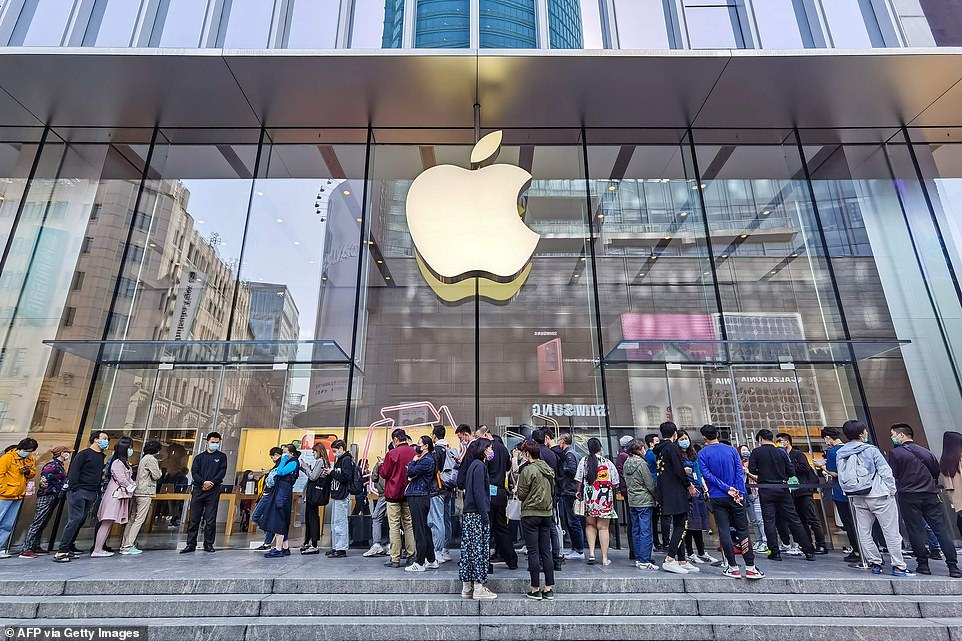 People wait outside an Apple store as the new iPhone 12 series launches in Shanghai, where crowds were reportedly smaller than last year 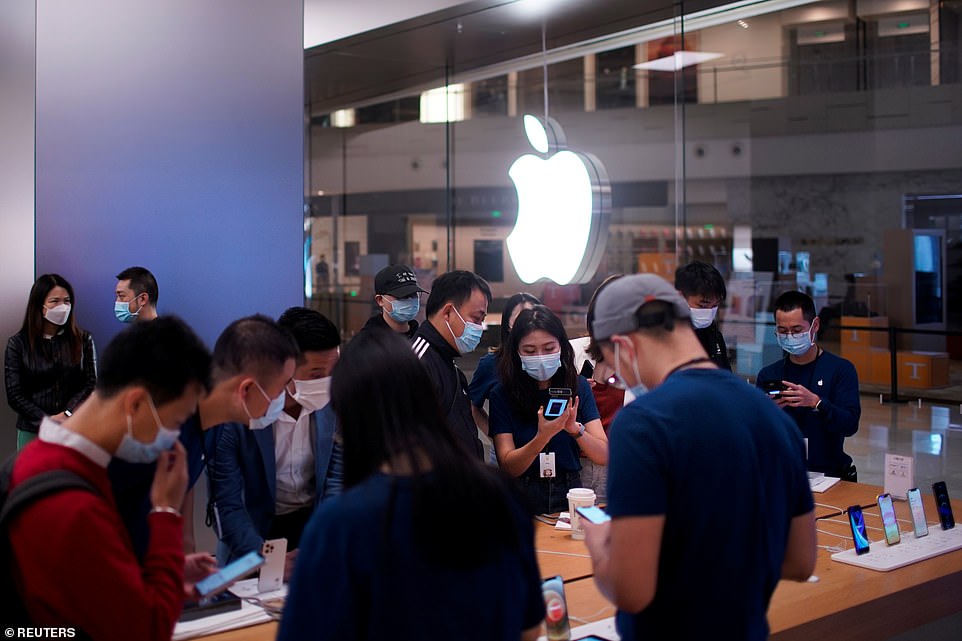 Potential customers look at Apple products at an Apple Store, as the coronavirus disease (Covid-19) outbreak continues to threaten 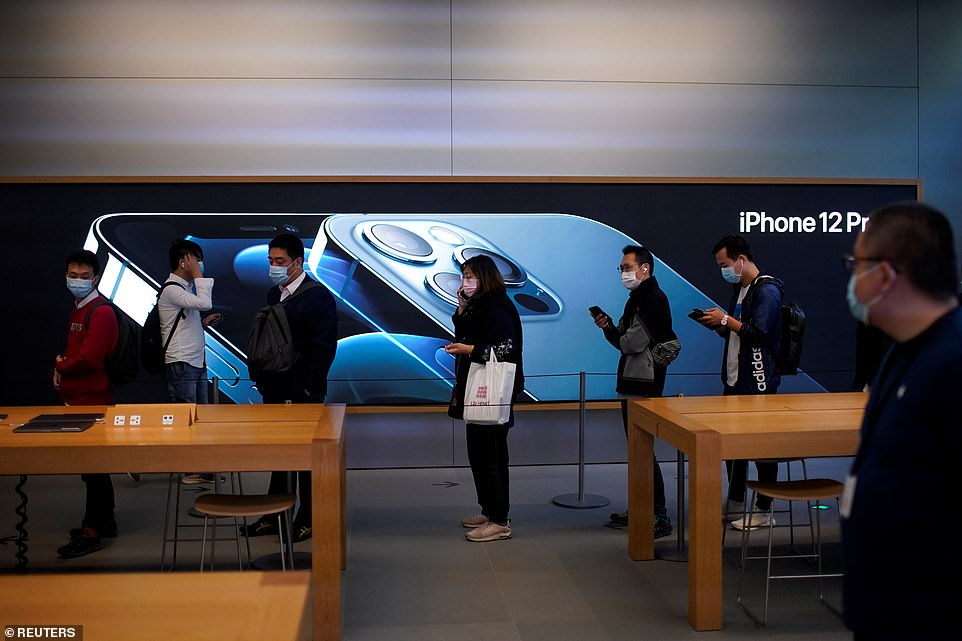 People line up as they wait at an Apple Store before Apple’s 5G new iPhone 12 go on sale, as the coronavirus disease (COVID-19) outbreak continues in Shanghai 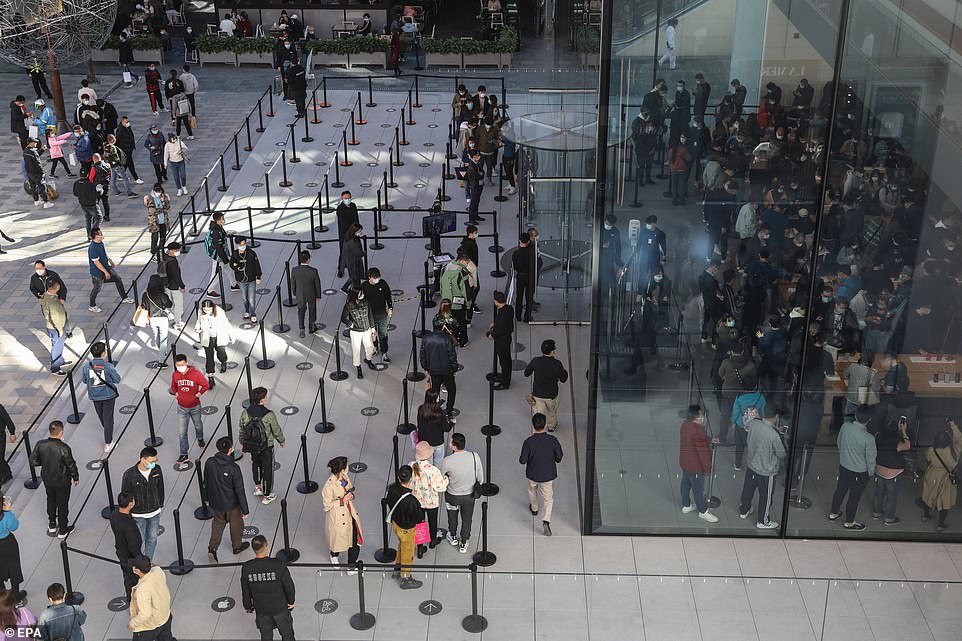 People line up to enter an Apple flagship store as sales begin for the new iPhone 12 and iPhone 12 Pro in Beijing, China on Friday 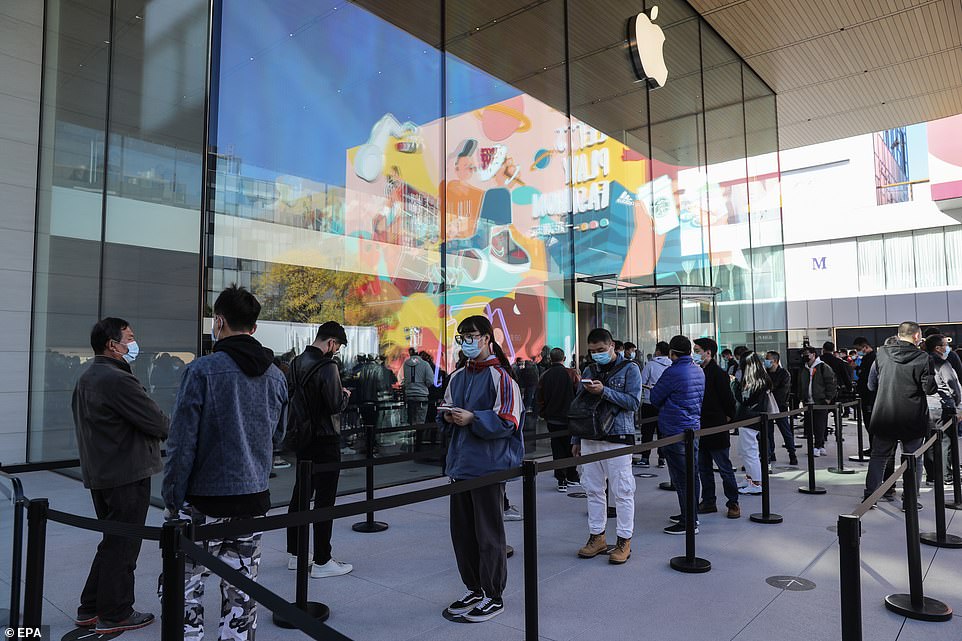 Another shot from the Beijing store. Even a global pandemic couldn’t put customers off getting their hands on Apple’s new device

Analysts expect a surge in orders for the iPhone 12, which was announced by the tech giant last week, due to its support for upgraded 5G network infrastructure.

Chinese e-commerce retailer JD.com saw pre-orders for all four models of the iPhone 12 hit 1.6 million on the first day of the announcement on Tuesday, October 13.

‘From the bottom of my heart, it’s a little bit late for Apple to release the 5G iPhone,’ said Zhu Lin, another Apple fan who had queued. ‘I was expecting it last year.’

The annual launch event is nearly one month later than normal and comes as the coronavirus pandemic has disrupted Apple’s well-oiled machine for designing and churning out its biggest-selling product.

The phone’s screen, meanwhile, uses glass ceramic that increases its strength and makes it more resistant to cracking if dropped to the ground. 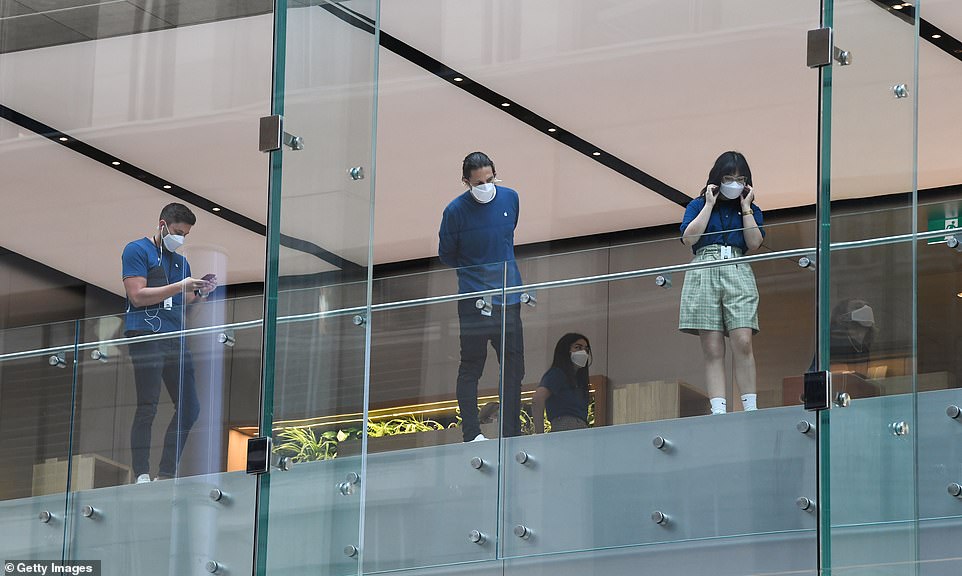 Social distancing, face masks and the glass walls of Sydney’s multi-storey Apple Store make for a scene out of a bizarre dystopian film 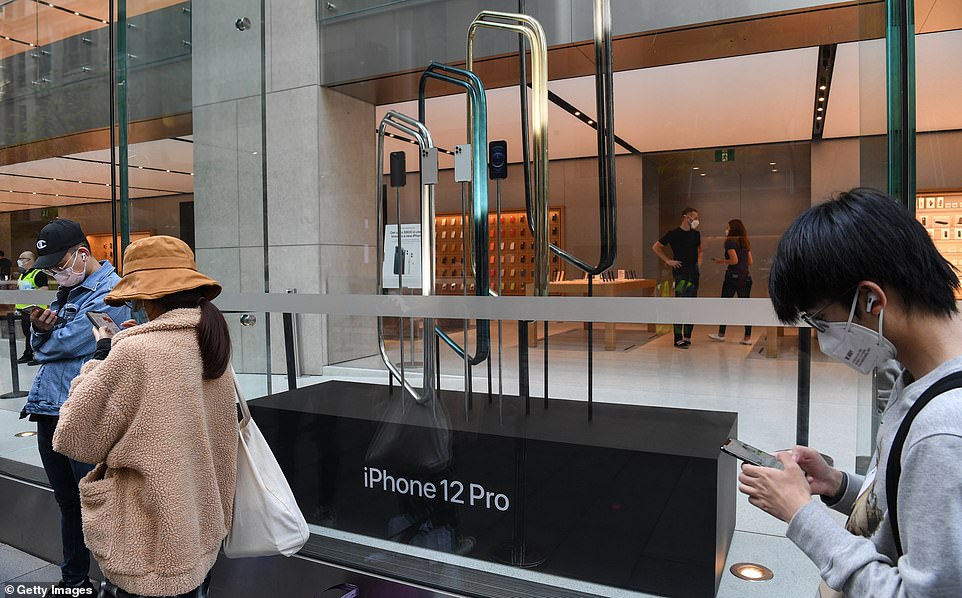 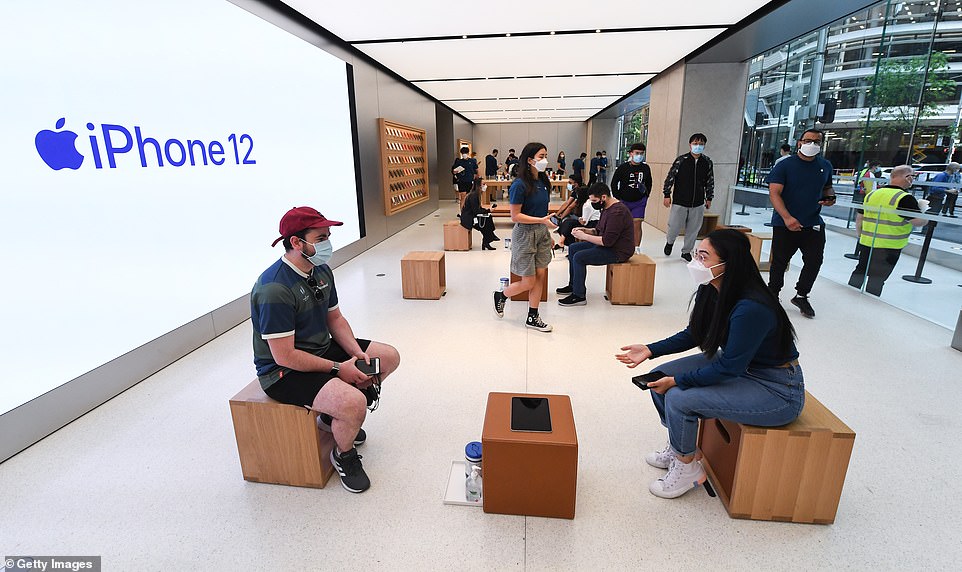 Customers at Sydney’s Apple Store in George Street look at the new iPhone 12 on sale in Sydney. Much of the furniture has been cleared during the pandemic to allow social distancing 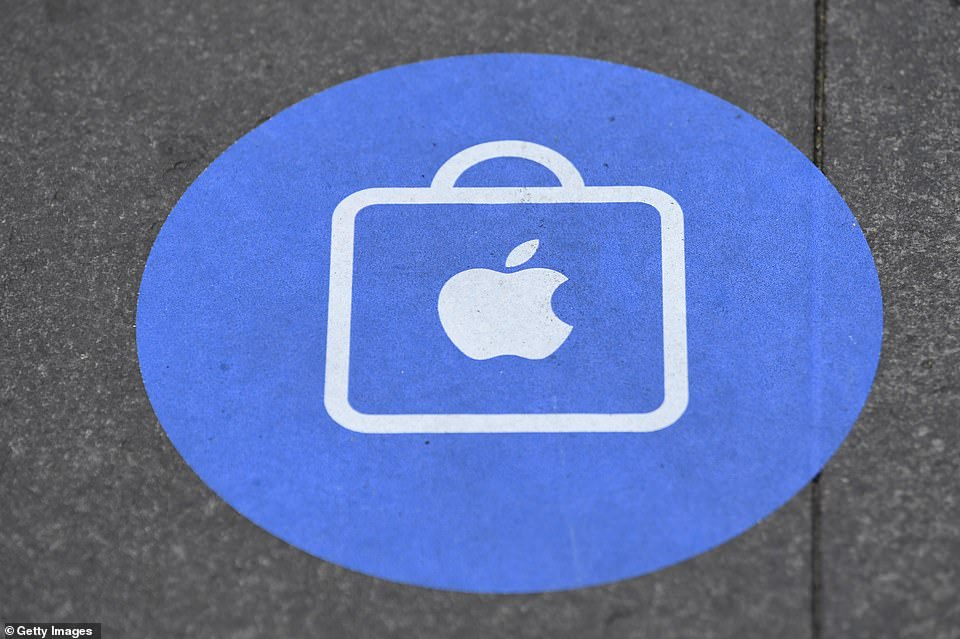 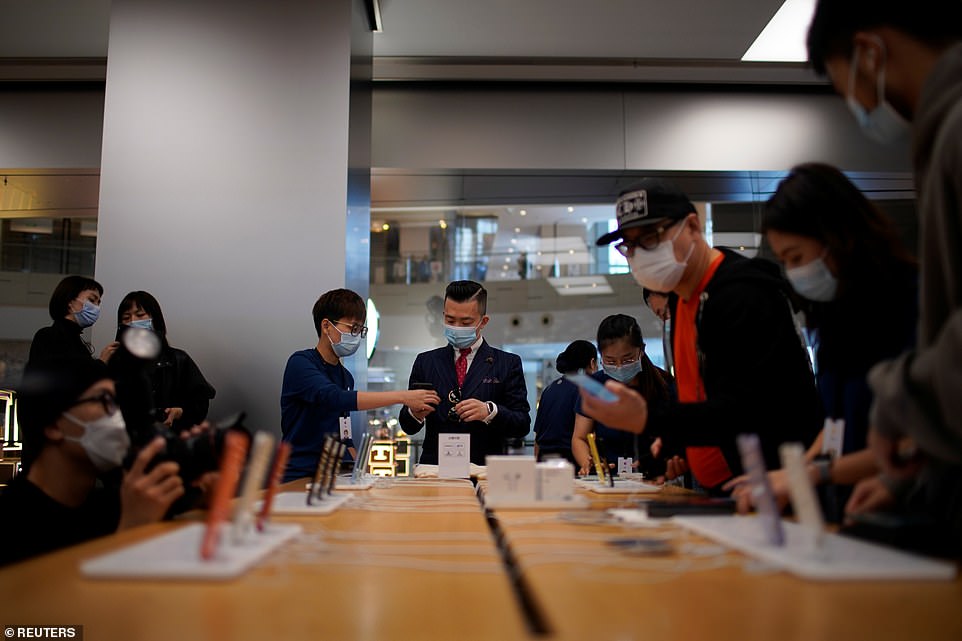 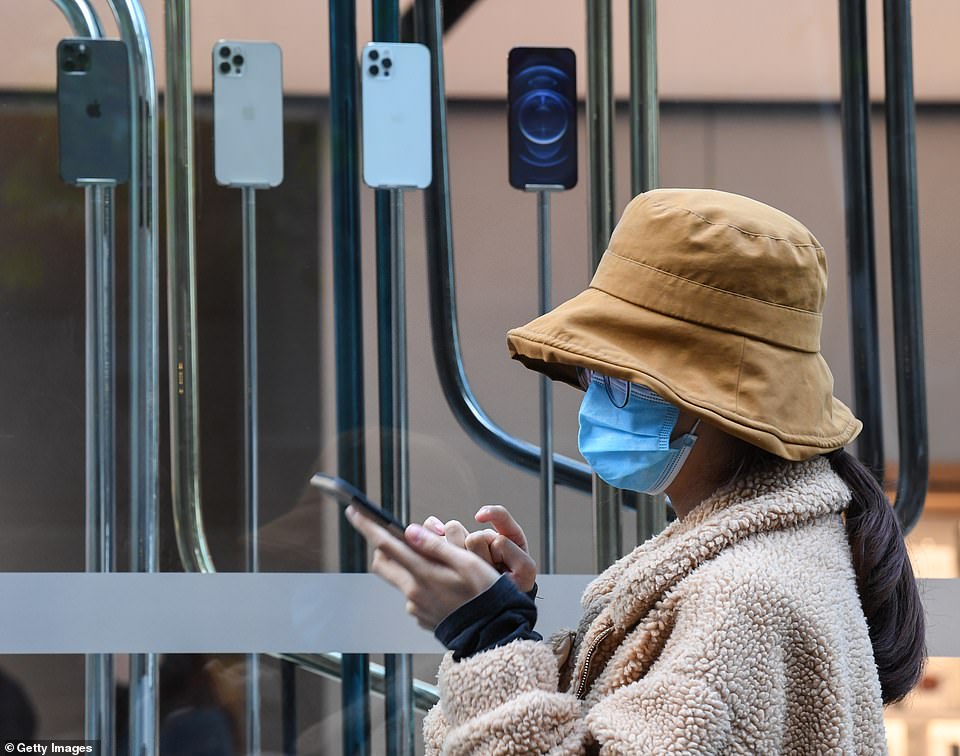 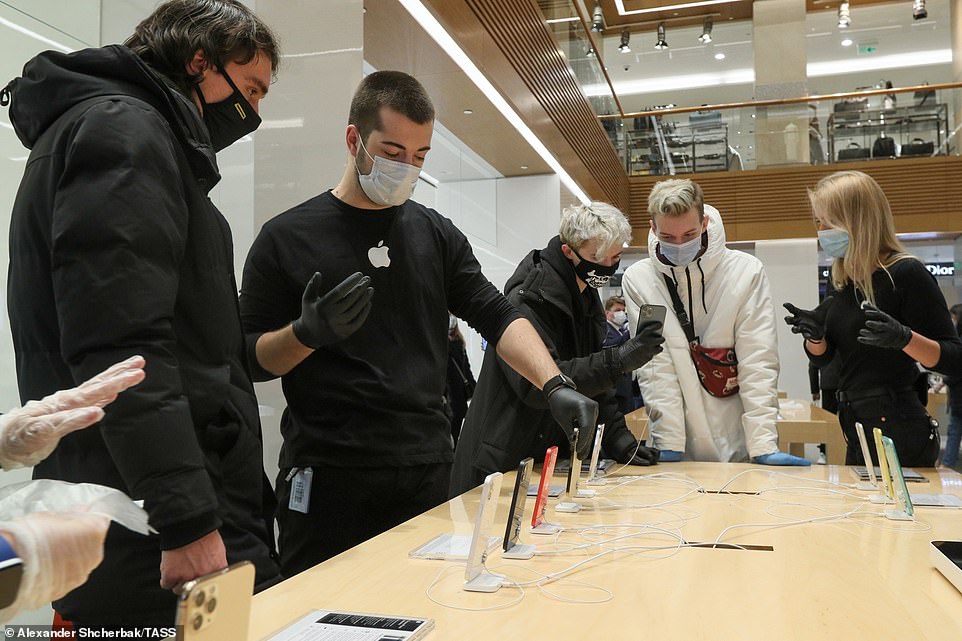 People visit a re:Store shop in Moscow’s Petrovka Street, as Apple has launched iPhone 12 and iPhone 12 Pro sales in Russia 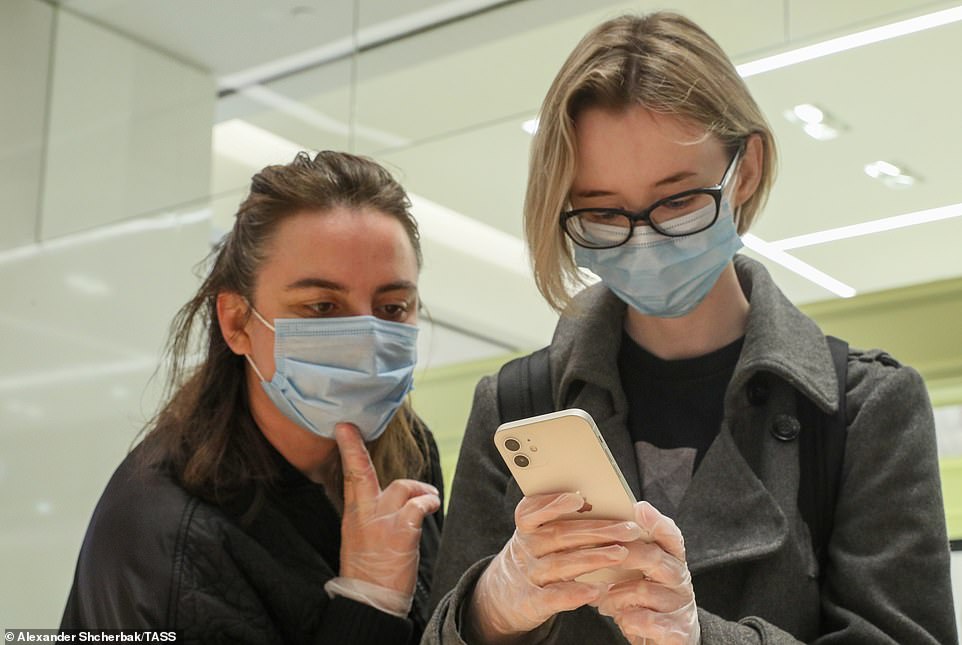 People examine a new smartphone at a re:Store shop in Petrovka Street with personal protective equipment on including masks and gloves 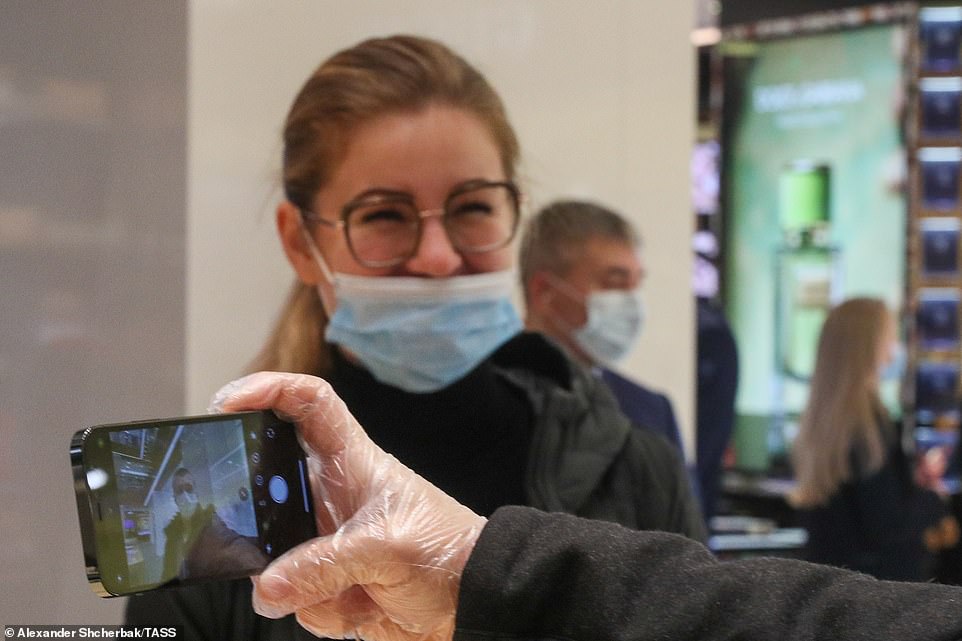 A customer takes a selfie at a re:Store shop in Moscow’s Petrovka Street as another shopper looks on with her face mask only half on

Apple has officially unveiled the new iPhone 12 during a live event that was watched by millions from around the world.

The smartphone is designed with rounded edges that look similar to the iPad Pro and boasts 5G cellular connectivity – the biggest upgrade to the smartphone.

This allows the device to access Verizons 5G ultrawide band, which is the fastest system in the world with over 4 gigabytes per second, according to Apple.

The iPhone 12 also includes a ceramic shield that the firm says is ‘tougher than any smartphone glass.’

The new addition is ‘virtually impervious to heat and electricity’ and makes it more resistant if dropped.

Along with the iPhone 12, Apple announced three other smartphones including the iPhone 12 Pro, iPhone Pro Max and its all-new iPhone mini with a price tag of $699.

The tech giant also unleashed its fastest camera into the new lineup.

The dual-lens camera system boasts a 12-megapixel ultra-wide and wide lenses, along with a seven-element lens that improves low-light performance by 27 percent.

Apple is opening pre-orders for the iPhone 12 on October 16, which comes with a price tag of $799 – but devices will not include wall chargers or Lightning EarPods.