Fake Lego sets aimed at children as young as six depicting ISIS terrorists firing AK-47s and launching sticks of dynamite have been pulled from the shelves.

Among the figures sold in various shops in Singapore was an ‘ISIS Jihadi John’, based on British executioner Mohammed Emwazi and the profile read: ‘Extremist who enjoys blowing things up for fun. One day, he’ll blow himself up.’

The sets, which are not linked to Lego in any way, featured ISIS flags and retailed at between £2.85 and £18.70 and some included plastic figurines of a decapitated head. 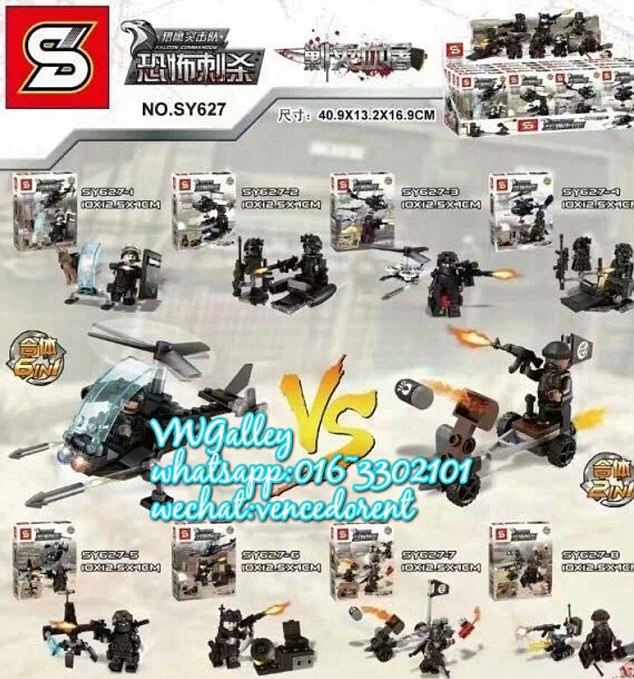 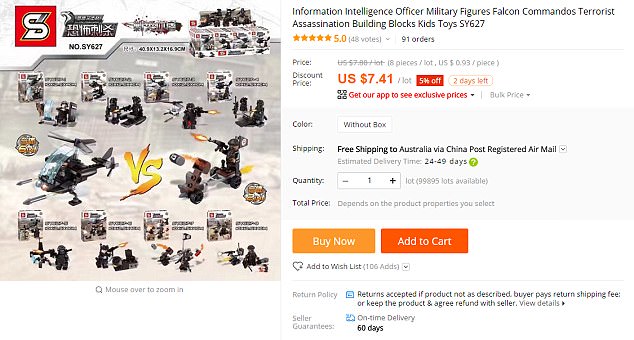 When contacted by The Straits Times, the outlets said they had stopped selling the counterfeit products.

Remy Mahzam, an associate research fellow at ICPVTR, said misusing Islam and its figures such as Allah and Muhammad was ‘very problematic.

‘It touches on religious sensitivities and sheds a negative light on Muslims,’ he said.

Lego immediately distanced themselves from the ISIS toys, also branded as Falcon Commandos, saying they were ‘in no way affiliated with the Lego group’.

Charlotte Simonsen, senior director of corporate brand communications at Lego, told The Straits Times the company is dedicated to developing children and would therefore never make a product like this. 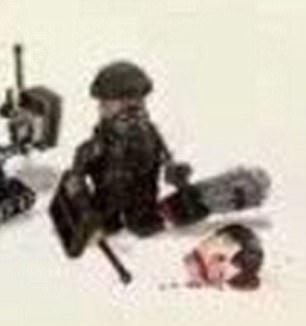 On the front cover, what appears to be an ISIS jihadist is seen holding a chainsaw near a man’s decapitated head

ISIS-inspired knock-off Lego was marketed to Australian children for less than £6 in June.

The counterfeit ‘Falcon Commandos’ set was being produced in China and sold on at least three overseas websites – including a Chinese discount retailer that ships to Australia.

The set, which depicts ISIS terrorists dressed in black battling counter-terror police, were being sold for £5.80 or less.

Ads for fake toys showed eight mini-figures – the small individual toys in each set of Lego – on the cover of the set.

In the photos, one of the figures appears to be an ISIS jihadi who is holding a chainsaw while looking at a man’s decapitated head at his feet.

An ISIS flag also appears to be pictured, as well as sticks of dynamite and figures launching weapons.

The set was ‘recommended’ for children aged six and over and was recently purchased accidentally by a young boy from a store in Taiping for £1.20 according to Berita Harian.

The toy’s serial number came back to a manufacturer in China, the publication reported. 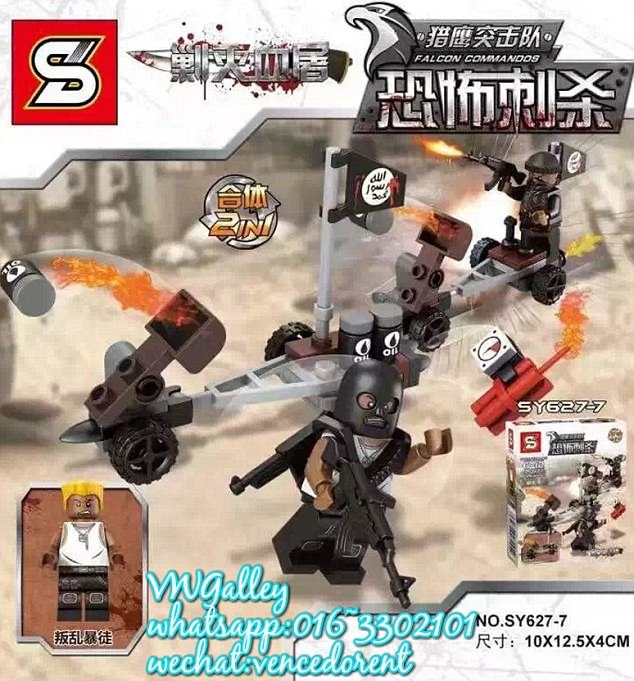 An ISIS flag is also believed to be pictured, as well as sticks of dynamite and figuring launching weapons (pictured)

Mahnun Mat Isa, a 40-year-old Malaysian mother and school teacher, told Berita Harian she reported the set to the Islamic council and to police officers.

‘I ask the authorities to not freely allow the entry of toys that touch on religious sensitivities in this country,’ Ms Mahnun said.

‘I came to know about it when my son who was playing with the toy showed me the ‘terrorist’ character holding a banner which displayed the words ‘Allah’ and ‘Muhammad’.’