Israeli teenager arrested for urinating on a memorial at Auschwitz

An Israeli teenager has been arrested at Auschwitz for urinating on a memorial commemorating victims of the Holocaust.

The 19-year-old man had been on a visit to the former Nazi concentration camp in Poland when he was seen relieving himself.

Witnesses said he urinated on a monument near the ruins of the crematoria in the Birkenau part of the former Nazi camp.

Disrespect: The 19-year-old Israeli was caught urinating on a memorial at Auschwitz-Birkenau, and was arrested by Polish police and questioned, before accepting a £1,060 fine

He was spotted by a guide in the grounds who alerted guards and police, Times of Israel report.

The young man was arrested by police around mid-day yesterday, and held for several hours.

A spokesman for the Auschwitz Museum said its is thought to be the first time such an incident has taken place involving an Israeli citizen.

The incident comes just weeks after Poland introduced a law criminalising blaming Poland as a nation for Holocaust crimes committed by Nazi Germany, 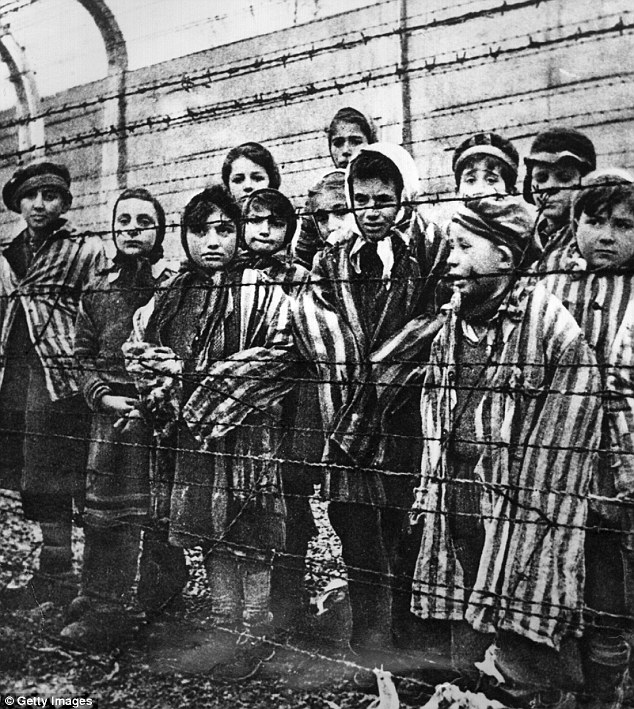 Never forget: Children behind a barbed wire fence at the Nazi concentration camp at Auschwitz in southern Poland

For years Polish officials have struggled to fight phrases like ‘Polish death camps’ that are sometimes used abroad to refer to Auschwitz and other death camps that Nazi Germany built and operated on occupied Polish territory during World War II.

Some Poles fear that as the war grows more distant, new generations will mistakenly believe that Poles were the perpetrators of the Holocaust.

The law, however, has sparked a crisis with Israel, where Holocaust survivors and officials fear its true aim is to repress research and debate about Poles who killed Jews during the World War II.

MailOnline has approached the Auschwitz Museum for further comment.