President Donald Trump, who’s been politically aligned with Netanyahu during his four years in office, continues to refuse to concede to the Democratic ex-vice president.

The leaders of Russia, Brazil and Mexico have yet to offer congratulations to Biden and Vice President-elect Kamala Harris.

Israeli Prime Minister Benjamin Netanyahu’s office said Tuesday he had spoken with Joe Biden. Netanyahu, who’s been politically aligned with President Donald Trump, congratulated Biden 12 hours after the race was called and hasn’t referred to him as president-elect 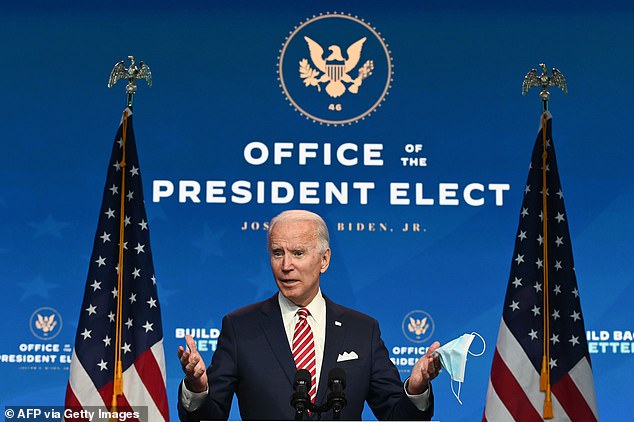 President-elect Joe Biden has been taking calls with world leaders since the presidential race was called in his favor. President Donald Trump, however, refuses to concede. Biden spoke with Israeli Prime Minister Benjamin Netanyahu on Tuesday

Netanyahu’s office confirmed the call, according to Reuters, saying the two leaders had a ‘warm conversation.’

‘The two agreed to meet soon to discuss the many issues that are pending and reaffirmed the need to continue to strengthen the strong alliance between the United States and Israel,’ the statement said.

The chat comes one day after Netanyahu, in a slip, called Biden the president.

‘I have been told that in the near future I will talk with the president …,’ the prime minister said during a Hebrew press conference, according to the Times of Israel. ‘Errr, with Joe Biden, who is supposed to be appointed the next president.’

Netanyahu wouldn’t give his thoughts on Trump’s unfounded claims that the election was ‘rigged,’ thanks to widespread voter fraud.

As of Monday, Trump was continuing to tweet that he had ‘won’ the election – despite a large deficit in both popular and Electoral College votes.

‘We have enough politics over here,’ Netanyahu said when asked about Trump’s claims.

Netanyahu follows the leaders of Canada, France, Germany, Ireland, the United Kingdom, Australia, Japan, South Korea and Italy in touching base with Biden, whose transition has been hobbled by the Trump administration, which is refusing to allow him to tap into federal funds.

Biden, who will be the U.S.’s second Catholic president, also spoke with Pope Francis last week.

The Biden-Harris team has yet to put out a readout of the Netanyahu call.

Netanyahu waited 12 hours after the race was called for Biden to put out a congratulatory tweet.

‘Congratulations Joe Biden and Kamala Harris,’ he wrote. ‘Joe, we’ve had a long & warm personal relationship for nearly 40 years, and I know you as a great friend of Israel. I look forward to working with both of you to further strengthen the special alliance between the U.S. and Israel.’

Until his slip-up Monday, Netanyahu hasn’t referred to Biden was the ‘president-elect,’ in a move that’s likely because he fears upsetting Trump, who has backed pro-Israel policies like moving the U.S. embassy Jerusalem, which thrilled Israelis while infuriating Palestinians.