Social media is crawling over David Warner’s recent #SandpaperGate press conference, with the majority of online commentators taking a scathing view of the cricketer’s seeming non-apology.

‘David Warner sidestepping questions about the involvement of others in the ball-tampering saga,’ posted Twitter user Jonathan Agnew, concisely summarising the element of Warner’s interview that most viewers apparently took issue with.

Warner continually evaded the media’s relentless questions about other people’s involvement in the scandal, repeating: ‘I’m here to take responsibility for my part in what happened.’

David Warner’s press conference apology for his part in the ball-tampering saga has drawn the ire of the online community, with many condemning him for deliberately avoiding questions 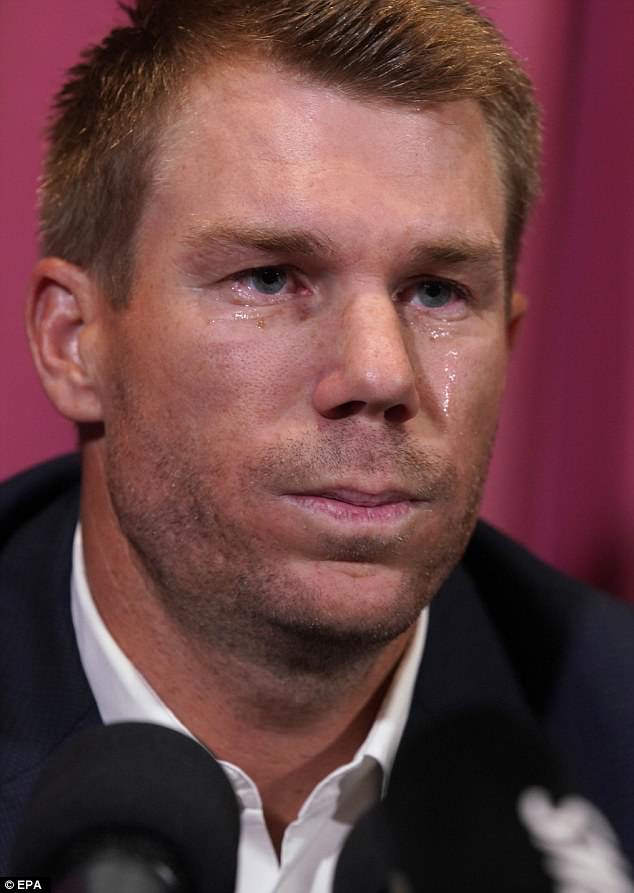 ‘Smithy jumped on a grenade while Warner purposely chose to avoid answers in order to implicate others and relieve ‘his part’ in it all. I sniff a paid tell all’.

Others alleged the Warner’s emotional displays were fabricated for the sake of PR, with many claiming the cricketer’s tears were forced and insincere.

‘Sorry to be harsh but does anyone think these tears from David Warner are crocodile tears after Steve Smith’s tears from his press conference?? … I’m just not buying it,’ tweeted one sceptic.

Another suggested that ‘Steve Smith is taking the fallout for Warner. He looks truly devastated.’