Italian papers were scathing in their criticism of the national team after Roberto Mancini’s side spurned an automatic qualification spot for the 2022 World Cup and will instead have to qualify via the play-offs.

The Azzurri, who were crowned European champions at Wembley against England just four months ago, were held to a goalless draw at Northern Ireland on Monday night, allowing Switzerland to snatch top-spot in Group C with a win against Bulgaria.

This followed a 1-1 draw against the Swiss in Rome on Friday – when Jorginho missed a late penalty to win the game – and Italian paper La Gazzetta dello Sport did not hold back, headlining with: ‘What a nightmare (and it’s not over yet).’ 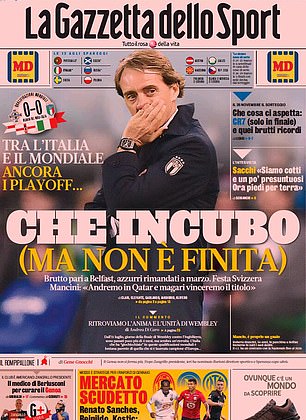 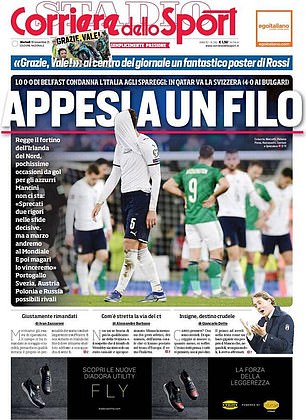 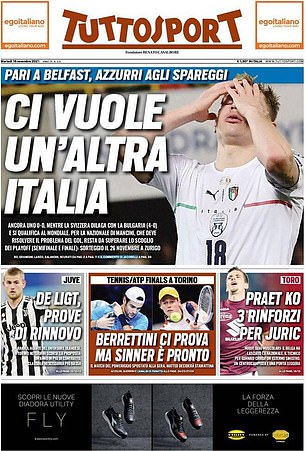 Mancini’s men will now have to go through March’s play-offs, alongside the likes of Cristiano Ronaldo’s Portugal, when 12 teams battle for just three spots in Qatar.

Gazzetta described the draw in Belfast as ‘ugly’ too, and also referred to the ‘ugly memories’ of missing out on a spot in the 2018 World Cup in the play-offs to Sweden.

Corriere dello Sport, meanwhile, insisted Italy’s hopes were ‘hanging by a thread’ after Monday’s disappointment, admitting that the Azzurri didn’t even create loads of goal-scoring opportunities at Windsor Park.

It also detailed that Sweden, Austria, Poland and Russia were amongst the other main rivals in the play-offs – Wales and Scotland will also be present in March’s round of games.

Finally, Tuttosport insisted ‘we need a different Italy’ just four months after their Euro 2020 triumph, emphasising that there is a ‘goal problem’ that needs to be resolved. 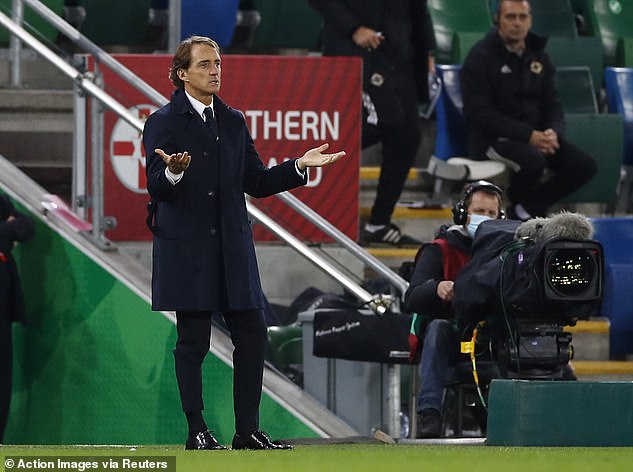 Despite coming second in the group, Mancini was bullish afterwards and believed his team would still qualify for next year’s showpiece in the Middle-East.

‘I am disappointed,’ he said after Monday’s Belfast stalemate. ‘We made life complicated for ourselves and qualification should’ve been sealed at least two games ago.

‘We had the chances and didn’t take them, now we’ve got to keep our feet on the ground, because there is still the possibility of qualifying for the World Cup.’