Woods, a friend and sometime golf partner of Trump, called Sunday for respect for the office of the president after being asked about his relationship with Trump, as well as race relations in the country.

‘No matter’s who’s president, whether it was Barack Obama or Donald Trump, I think you respect the office,’ Nicklaus told Fox News. ‘I’m much in Tiger’s camp on that.’ 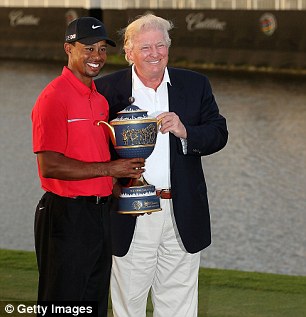 Woods, a friend and sometime golf partner of Trump, called Sunday for respect for the office of the president after being asked about his relationship with Trump, as well as race relations in the country. Nicklaus supported Woods’s response, but told Fox News that he was on the network’s morning show to discuss his charity, Folds of Honor, and not the President

However, Nicklaus was not on Fox News’ morning show to discuss Trump or Woods, and quickly turned the topic to Folds of Honor, a charity he works with that provides scholarships to the children and spouses of fallen and disabled service members.

The resurgent Woods – who has not won a tournament since 2013, but finished second at the PGA Championship last week – had been asked a question that referenced Trump’s controversial immigration policies on Sunday.

‘At a time, especially 2018, I think a lot of people, especially people of color, immigrants, feel threatened by him, by his policies, he’s thrown himself into sports debates in terms of race with LeBron James, with the anthem,’ began one question to Woods on Sunday, according to USA Today. ‘What do you say to people who might find it interesting that you, I guess, have a friendly relationship with him?’

In response, Woods told reporters: ‘He’s the president of the United States and you have to respect the office.’

‘And no matter who’s in the office, you may like, dislike personality or the politics, but we all must respect the office.’

‘The Fake News Media worked hard to get Tiger Woods to say something that he didn’t want to say. Tiger wouldn’t play the game – he is very smart. More importantly, he is playing great golf again!’ Trump said on Twitter. 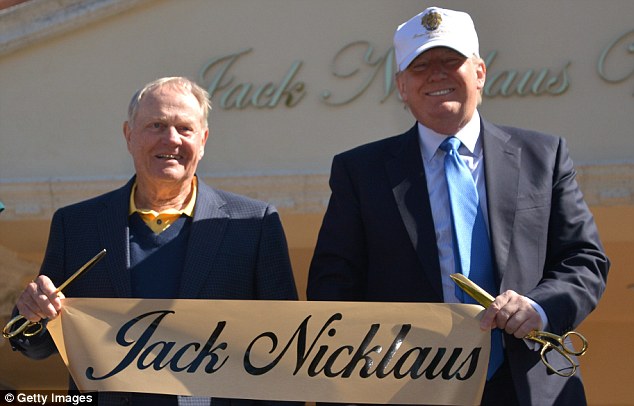 Like many prominent members of the golf world, Nicklaus is familiar with Trump. In this picture from 2015, the PGA legend can be seen unveiling of the Jack Nicklaus Villa at Trump Doral 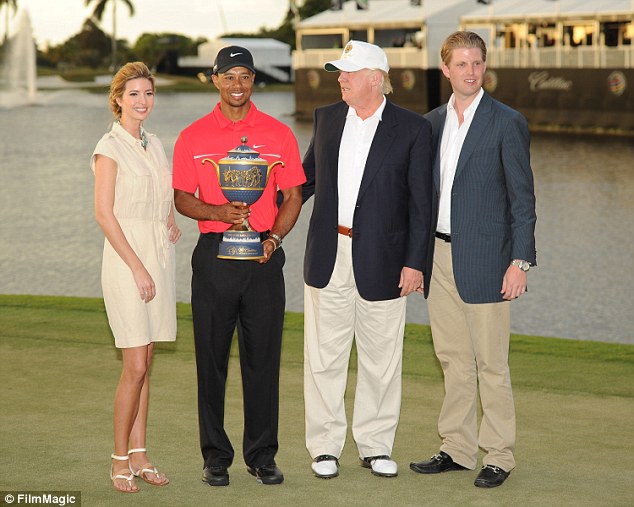 Ivanka Trump, Tiger woods, Donald Trump and Eric Trump after the final round of the World Golf Championships-Cadillac Championship at the Trump Doral Golf Resort & Spa in 2013

Just as he did with previous presidents George W. Bush and Barack Obama, Woods has played golf with Trump on several occasions, and the two have stayed in touch since the latter’s inauguration.

‘We’ve played golf together. We’ve had dinner together. I’ve known him pre-presidency and obviously during his presidency.’ 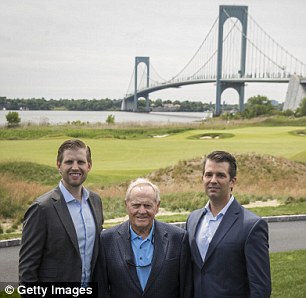 Woods was also asked about racial relations in America, but he declined to give a response.

In 2008, Woods did not hesitate to praise Obama publicly.

Woods was coming off an impressive runner-up finish at the PGA Championship, but struggled on Sunday before finishing with a 70 for the round, which left him 14 shots off the lead.

Bryson DeChambeau shot a 2-under 69 on Sunday to win his second tournament of the year. He finished 18-under overall.

Woods is not the only professional athlete to sidestep questions about his relationship with Trump.

New England Patriots quarterback Tom Brady has also played golf with Trump, and even went so far as to endorse his bid for presidency during the 2016 campaign. However, when asked in January of 2017 if he called to congratulate Trump on his victory, Brady balked: ‘Let’s talk about football.’ 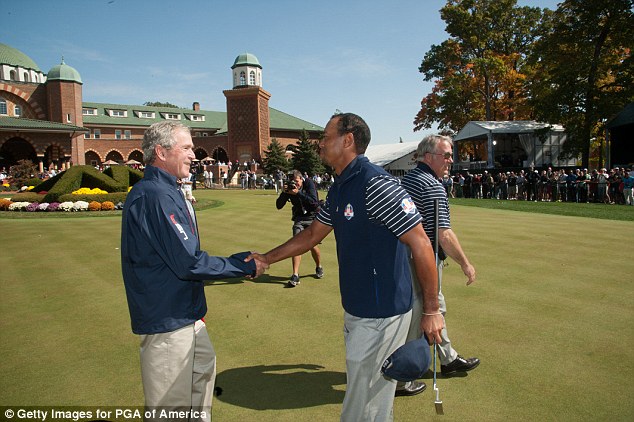 President George W. Bush visits with US Team player Tiger Woods during the Afternoon Four-Ball Matches for the 39th Ryder Cup at Medinah Country Club on September 29, 2012 in Illinois 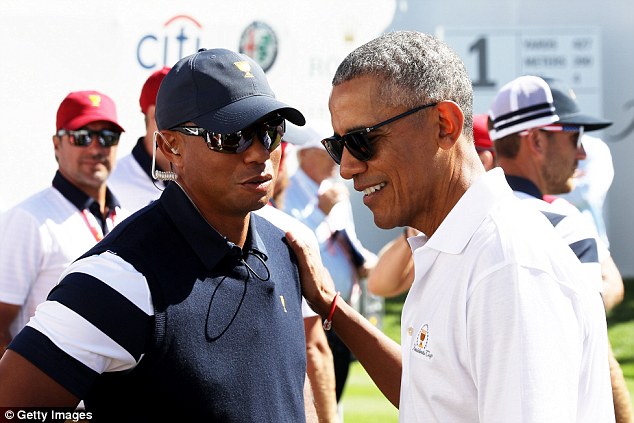 Trump has had a more contentious relationship with other athletes – namely NFL players who he has condemned for protesting inequality and police brutality by refusing to stand during the national anthem.

Former NBA MVP winners LeBron James and Stephen Curry have both exchanged criticisms with Trump through traditional and social media as well. 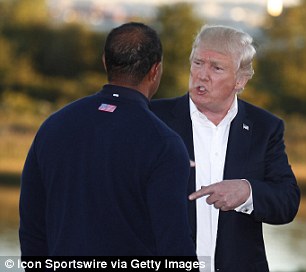 Donald Trump the 45th president of the United States talks to USA vice captain Tiger Woods after the final round of the Presidents Cup at Liberty National Golf Club on September 30, 2017 in Jersey City

San Antonio Spurs coach Gregg Popovich and Golden State Warriors coach Steve Kerr have also publicly criticized Trump for everything from his response to gun violence to claims that the President has used race to divide the country.

However, unlike James and Curry – both of whom Trump has called out by name, specifically disinviting them from a potential White House visit – the President has not mentioned Popovich or Kerr publicly.

An avid golfer, Trump owns and operates many golf courses and resorts, both in the United States and abroad.

In fact, Woods has won several tournaments at the Trump National Doral resort near Miami. 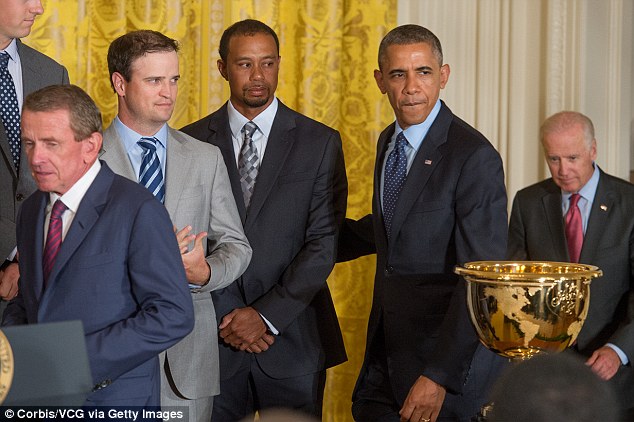