The snaps were taken at The Homestead, a luxury holiday resort in Hot Springs, Virginia, in the summer of 1945.

At the time, the girl who would grow up to marry President John F. Kennedy was between terms at the prestigious Miss Porter’s School in Connecticut.

They are being sold at auction alongside other items, including a heartbreaking letter she penned nine days after Kennedy’s assassination. 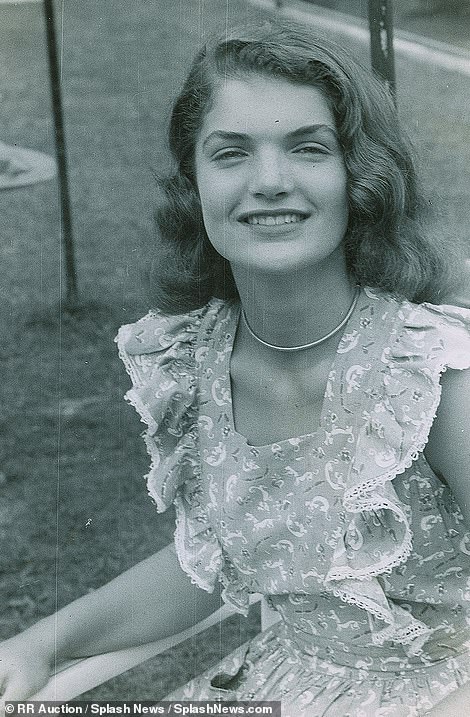 Never-before-seen photos of Jackie Kennedy as a stunning 16-year-old girl, taken at The Homestead, a luxury holiday resort in Hot Springs, Virginia, in the summer of 1945 have been put up for auction

Also among the photographs up for auction are two that show Jackie on a tennis court with her younger sister Lee.

Another shows her in a sleeveless dress with her father, wealthy stockbroker John Bouvier, enjoying a meal outdoors.

The photos – estimated to sell for $1,500 (£1,200) – originally belonged to John David Wooster Lambert, heir to the Listerine mouthwash fortune.

Meanwhile, the letter, written on White House stationery card, is dated December 1, 1963, and addressed to Godfrey McHugh, Kennedy’s military aide who served on Air Force One.

Kennedy had been assassinated as he rode in a motorcade through Dallas, Texas, on November 22, 1963. 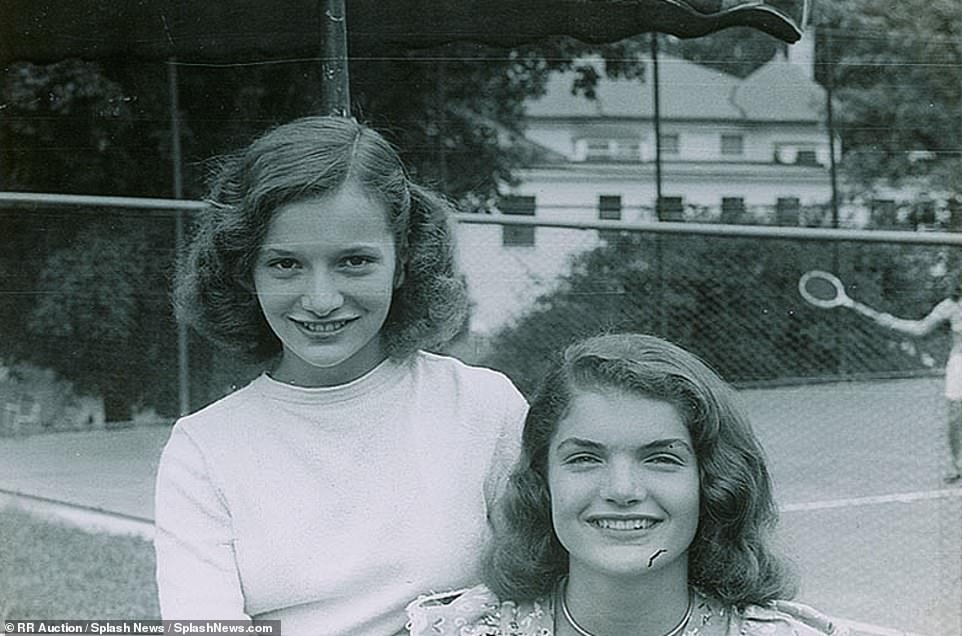 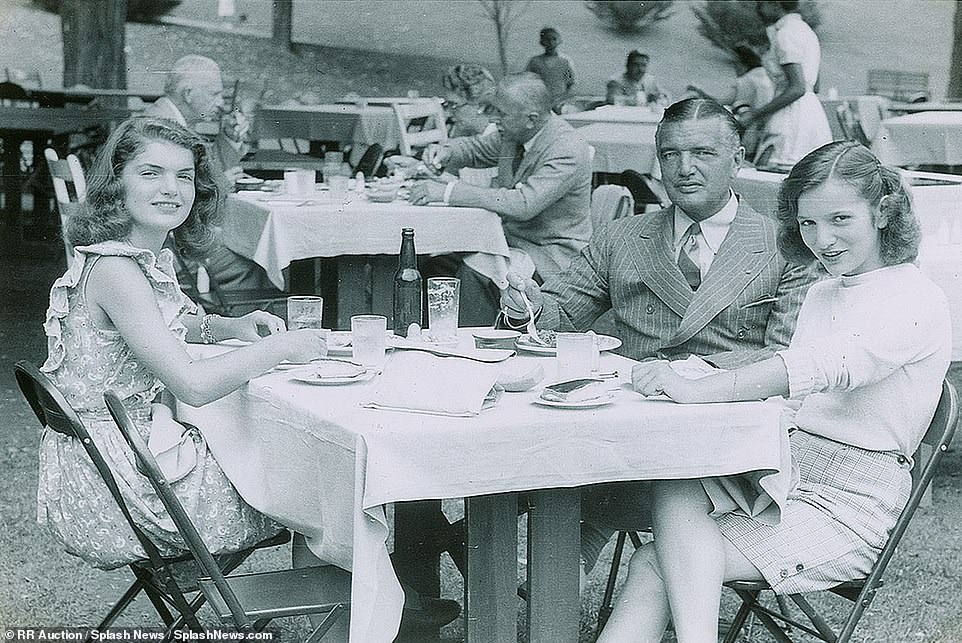 Another shows her in a sleeveless dress with her father, wealthy stockbroker John Bouvier, and her sister enjoying a meal outdoors

Days later, a distraught Jackie sat next to JFK’s coffin during his final flight back to Washington – and she described the ‘haunting’ experience in the one-page letter.

‘Air Force One, that you worked so hard to make so beautiful – and that the president was so proud of – all blue and silver,’ Jackie wrote in the letter. 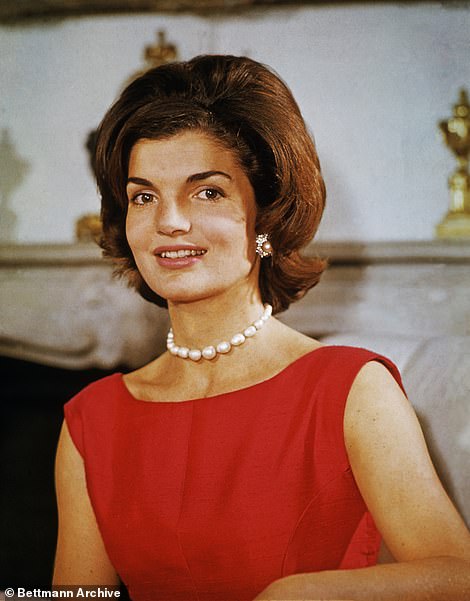 The photos – estimated to sell for $1,500 (£1,200) – of Jackie (pictured in 1960) originally belonged to John David Wooster Lambert, heir to the Listerine mouthwash fortune

‘We shared hours on it that will haunt us all our lives, those last hours.

‘At his funeral when it flew over so low – I will never forget it. I thank you for your loyalty to him always.’

‘Jacqueline’s beauty, as we would come to know the future First Lady, is captured in these candid photos with her sister Lee and their beloved father John Bouvier.

‘They look happy and radiant, just five years after their parents’ divorce.

‘Although their mother, now remarried as Janet Lee Auchincloss, retained custody of the children, they loved to spend time with their doting and attentive father.’

He added: ‘The sale also includes a letter written by Jackie in the immediate aftermath of the assassination to an important aide who shared her tragic experience.

‘This letter stands out as a truly incredible Kennedy item – one in which she recounts the horrific flight from Dallas to Washington and reflects upon the funeral that riveted not only America, but the rest of the world.’

He was the youngest president ever elected and the first Roman Catholic.

The couple had arrived in Fort Worth about 11pm on November 21, 1963, as part of a multi-city tour of Texas that was an unofficial kickoff for Kennedy’s 1964 re-election campaign. 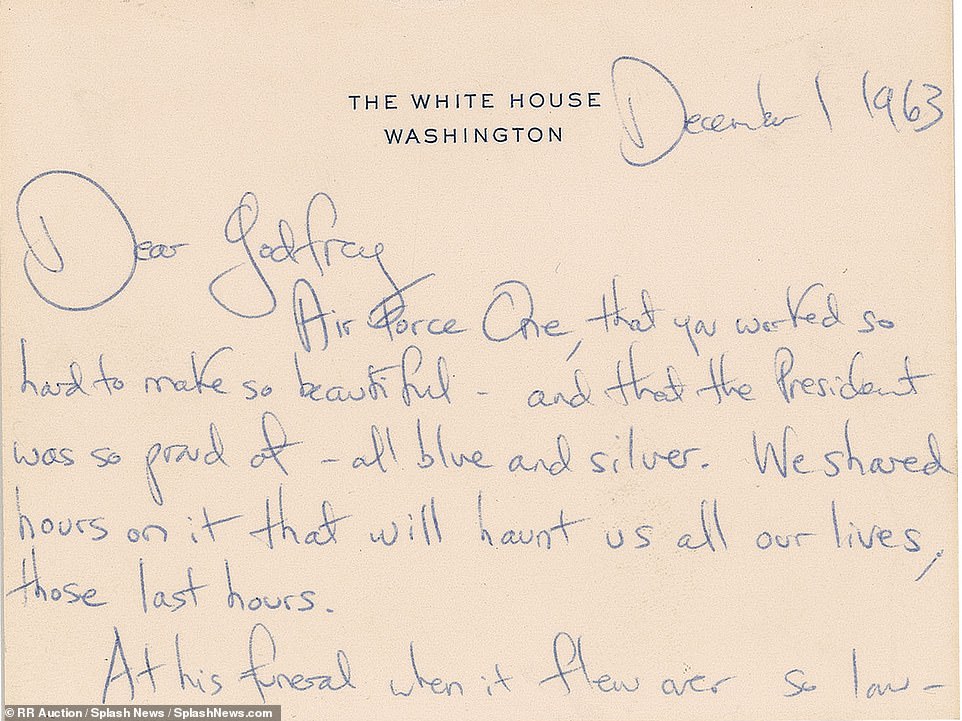 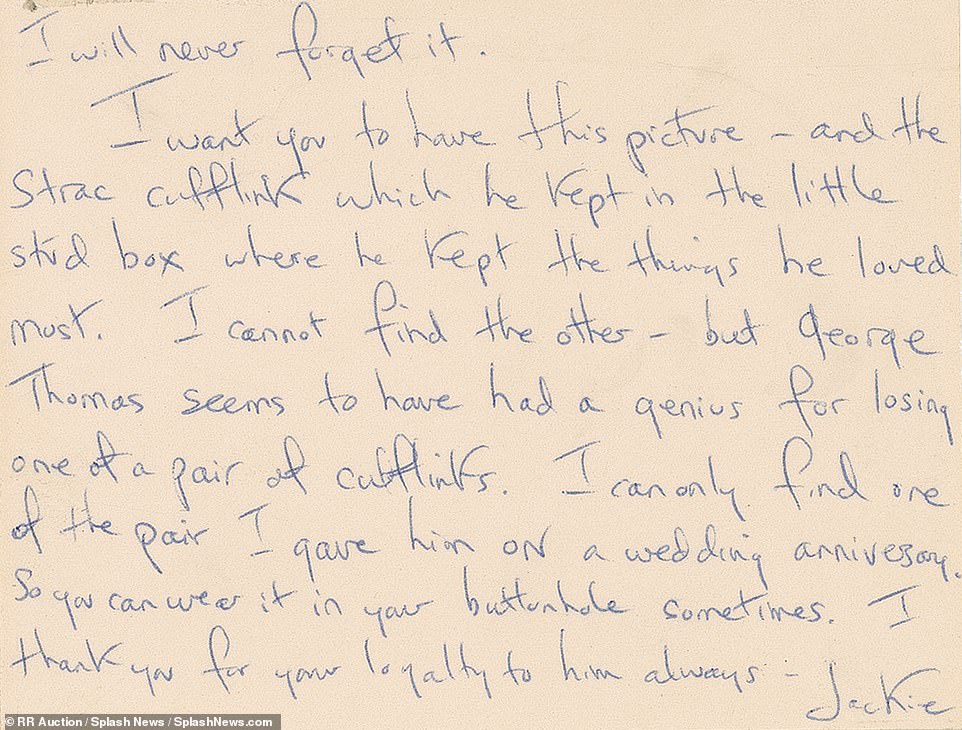 Also up for auction is a letter, written on White House stationery card and dated December 1, 1963, that is addressed to Godfrey McHugh, Kennedy’s military aide who served on Air Force One

It had been Jackie’s first public appearance since the death of the couple’s infant son, Patrick Bouvier Kennedy, that August.

Lee Harvey Oswald shot the Kennedy as he and his wife rode in a motorcade in Dallas.

Oswald never stood trial as he was shot and killed two days later by Dallas nightclub owner Jack Ruby while in police custody.

After the president’s death at the age of 46, up to 40,000 letters of condolence flooded into the White House a day.

Friends and volunteers were recruited to help open the mail which soon filled entire rooms of the White House and Executive Office Building.

Jackie, who was born Jacqueline Bouvier to John and Janet Bouvier in 1929, met Kennedy, then a Congressman, at a dinner party in 1952.

The socialite and book editor married him in a lavish ceremony in Newport, Rhode Island, on September 12, 1953.

The timed auction ends on November 7. 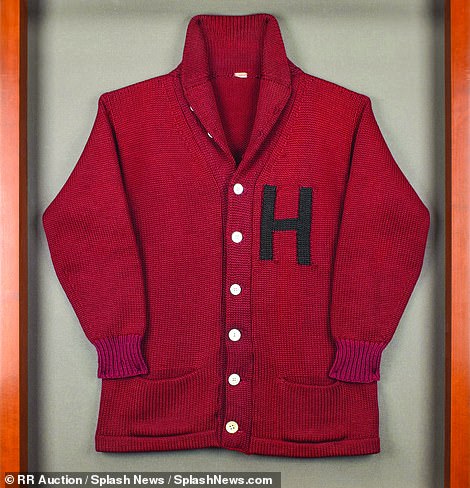 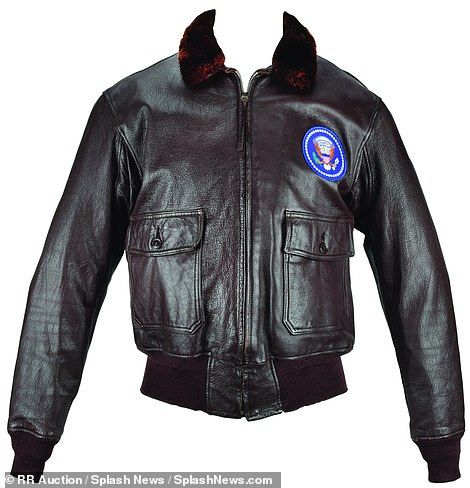 John F. Kennedy’s Harvard sweater (left) and his bomber jacket (right) are also up for auction 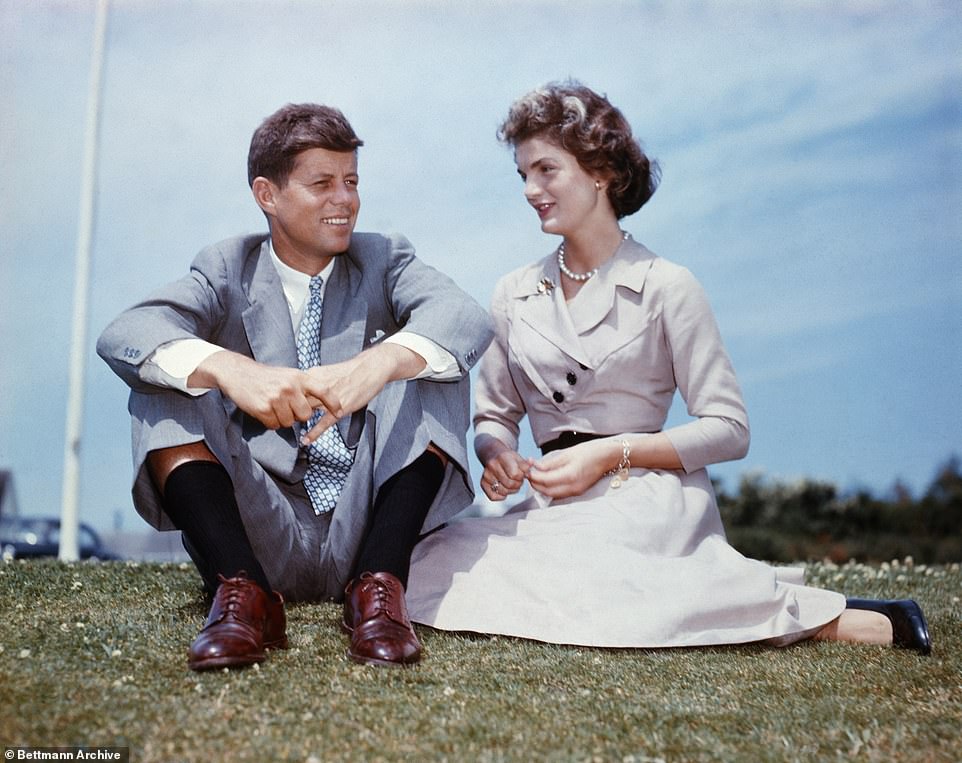 John F. Kennedy and Jackie Kennedy sit together at Kennedy’s family home at Hyannis Port, Massachusetts, a few months before their wedding in 1953